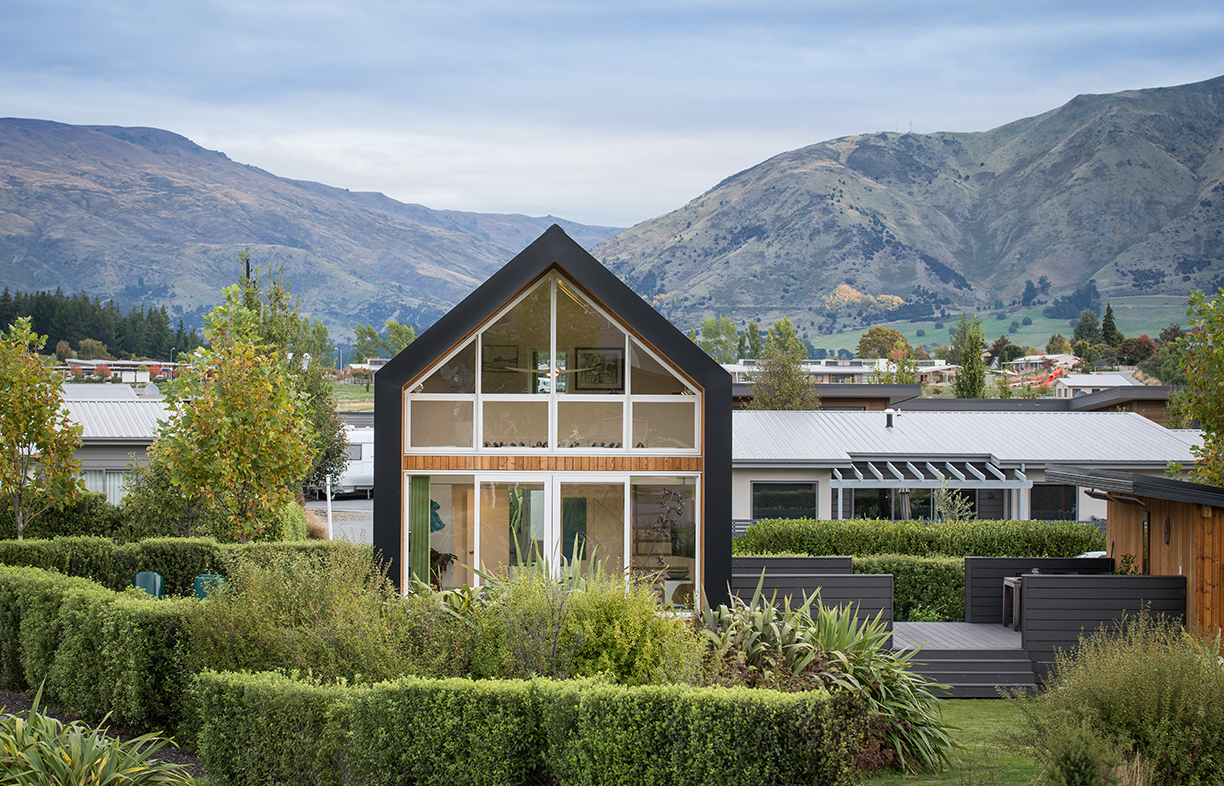 Located on a corner block in a new housing estate in Wanaka, the house is small but has a big presence: “I see people doing drive-bys trying to get a look in,” laughs neighbour and house designer Barry Condon. 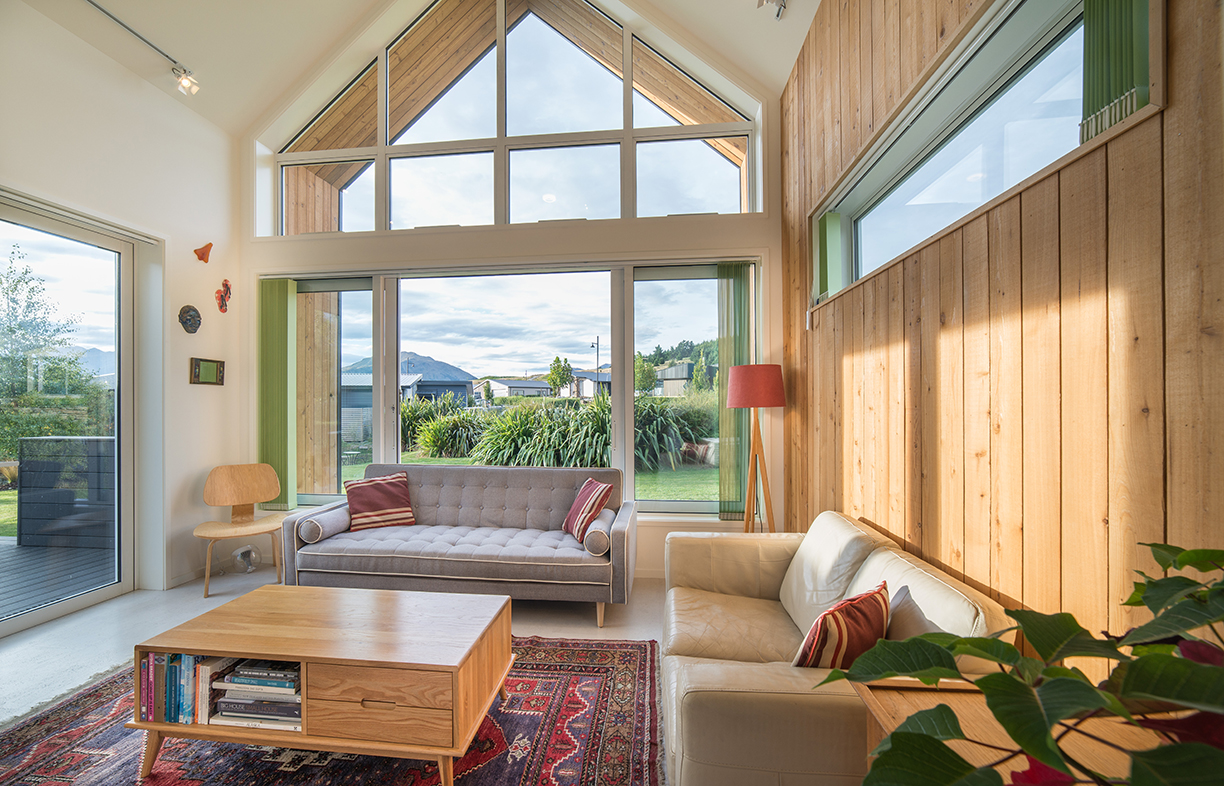 Not a morsel of space is wasted but Will and Jennie haven’t skimped on what they need, including a coffee table and two large couches (one folds out into a spare bed). The house is so well insulated and airtight, and glazing is optimised for passive solar gain, little active heating or cooling is needed. 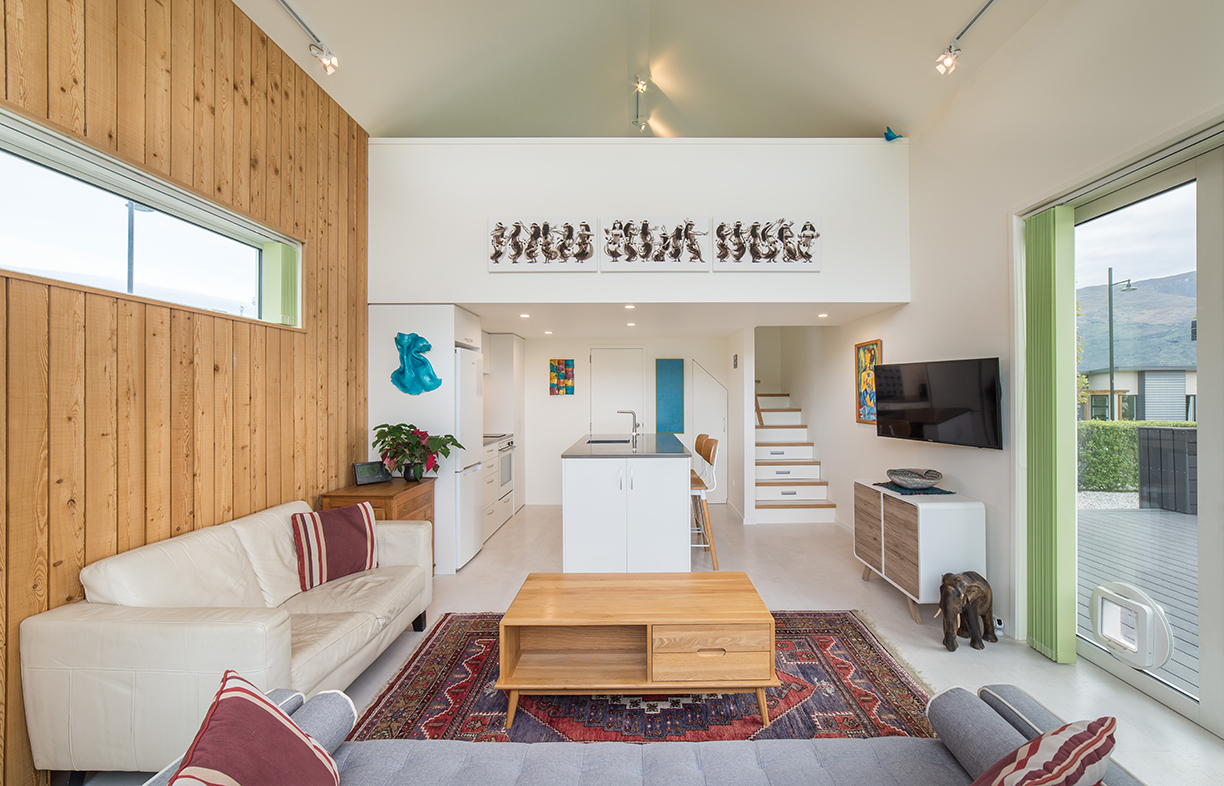 The mezzanine has been left partially open to make the interior feel spacious. “Because of the way we designed it with a nice high ceiling and lots of glass it doesn’t feel at all claustrophobic,” says Will, who works from home.
< 1 / 3 >

The owners of a tiny house, built using SIPs, are relishing the experience of living a life less ordinary.

It’s somewhat incongruous to find one of New Zealand’s smallest and most energy efficient homes in a brand new housing estate. Tiny houses are normally designed in response to site restrictions rather than to sit proudly on a grassy, 640-square-metre allotment. However, for owners Will and Jennie Croxford, building tiny was never about being constrained; they were motivated by the freedom of living with less.

“I think there is a growing appetite to live at a smaller scale without it having to be a ‘frugal’ statement,” says Will of the decision to ‘downshift’ into a 30-square-metre footprint. He’s swift to add their change in mindset didn’t happen all at once, but after living out of pannier bags for months when cycle touring and when moving several times within Wanaka while they looked for an appropriate block. “Every time we opened our storage boxes we’d ask, ‘why bother keeping all this stuff?’” says Will. “If we had had to get rid of all of it in one hit it would have been mildly traumatic.”

They settled on a block in the Kirimoko Park estate. The development encourages sustainable design and doesn’t enforce a minimum footprint size. “The developer John May was really keen to have us, especially as we were planning an architecturally designed, avant-garde tiny house,” says Will. Their new ‘section’ also happened to be next door to architect and long-standing friend Barry Condon, who soon became immersed in the project.

By the time Barry got involved, decisions had already been made around the floor plan, the high gabled roof and the use of SIPs (structural insulated panels), chosen for their high insulation R-value and the convenience and airtightness they offer.

“Our job was to interpret their plan, pull it together into a cohesive form and give it a look and feel,” says Barry. They limited the external material palette to asphalt shingles and timber, to make it look like a crafted little box. “It also reflects the way the building is made. The whole thing is built with SIPs and it seemed appropriate to carry a single material up the walls and over onto the roof.”

Inside, every morsel of space is used. Drawers pull out from under stair treads and the ‘toe kick’ board in the kitchen was removed to allow more cupboard space. Rather than following housing ‘norms’ they designed for the way Will and Jennie live 99 per cent of the time. Instead of a spare room, guests ‘glamp’ in the backyard or stay in nearby Airbnbs; the bathroom is designed to accommodate an inflatable tub rather than a fixed bath that they’d rarely use.

“At first I thought it was a bit ambitious – a 30-square-metre footprint isn’t a massive amount of space to fit a kitchen, bathroom, sleeping and living space,” says Barry. “I actually tried a few times to make it a little bigger, but Will would always push back and try to make it smaller, which was interesting for me because normally with clients I am the one trying to reduce size! Ultimately we landed on a happy medium.”

In saving space, they didn’t strip out any essentials, though. There’s room for artworks, a full-sized fridge, two large couches and a coffee table. “People comment that it seems like a normal lounge – just without all the extra floor space you never use,” says Will. “Minimalism isn’t about living in an empty white box, it’s about having less stuff.”

To give the design “pop”, they glazed the north face, which also ensures they have all-day sun and good passive solar gain. The building is sealed tight in keeping with Passive House principles, but rather than use triple glazing, they ordered thermally broken, low-e, doubled-glazed windows with wider-than-standard gap between panes to up the insulation value. Other wall openings were kept to a minimum to help maintain thermal comfort: a window to the east provides morning light and doors to the west open onto a large entertainment deck; a shed at the other end blocks the sun on hot summer afternoons. “We learnt from our last house to shade the deck,” says Will.

Since they moved in last August, a fan and portable heater have been sufficient on the warmest and coolest days. The energy monitoring system shows a minimum ambient temperature of 20 degrees, validating their decision to hold off on installing a reverse-cycle air conditioner.

“We get positive feedback all the time from people who say they would love to live like this,” says Will. “We even had a delegation from the Cook Islands come through to see it because it has a holiday feel to it, the scale of things is what you would expect in a wee cabin by the beach.”

Barry has been busy with enquiries about the design and especially the use of SIPs: “I hadn’t worked with them before, and the airtightness and prefab component really struck a chord with me. The whole house went up in less than a week,” he says. “On size, I still think Will and Jennie are brave to put their neck out there. A lot of people talk about doing this sort of stuff but they actually did. That impresses me.”