It’s argued that Australia is well behind the pack when it comes to green building, but an increasing number of progressive developments across the country are showing what’s possible. There’s also a growing move to bring these developments to our cities, spurring innovation that spans sustainable design to creative financing.

A modest Newtown cottage has undergone a gradual transformation into an urban oasis and a ringing endorsement for small-scale city living.

Room with a view

A clear brief and creative freedom allowed architect Tim Angus to make the garden an integral part of this Melbourne period cottage with a sensitive addition that links old with new.

An innovative inner Brisbane renovation transformed the home’s existing rooms and their connection with the outdoors, while preserving the garden.

An energy-efficient addition to a charming double brick home in Melbourne’s east bucks the trend for all new.

A new home in the tropics of Far North Queensland rests gently within the rainforest.

Emma Hohnen wanted a modest home for herself and her two children on a tiny budget in an even smaller timeframe. The restrictions led to the creation of a light, airy, character-filled space tailored exactly to her needs.

Architect Julian Rutt offers Jared and Kylie Barnes some design advice for their planned new house on an unusually shaped block in the Adelaide suburb of Campbelltown.

We all want to live in comfortable homes with low running costs, but how do we quantify the market value of these benefits? Danielle King outlines the issues around valuing green homes and some of the efforts to address them.

Australia’s rising city-based population coupled with a growing interest in food miles has led to fertile conditions for urban agriculture.

A better shade of grey

Potable water is becoming the world’s liquid gold, and in the driest continent on earth, it’s priceless. Horticulturist Michael Tanner outlines how you can help save this precious resource by going grey in the garden. 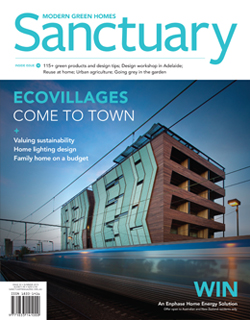