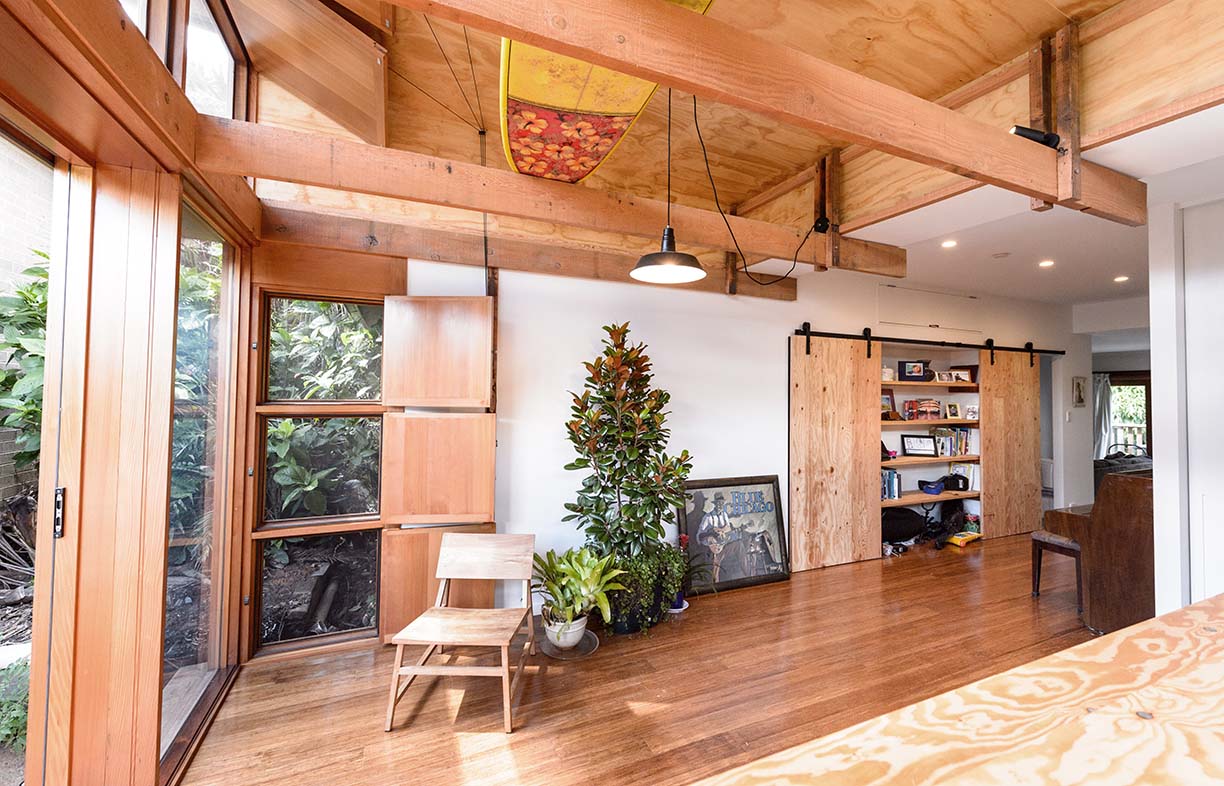 Batten down the hatches! Operable hatches at the high point of the raked ceilings allows them to be left open seasonally.

Shrinking the footprint and redesigning and rebuilding one part of this simple beachside house improved its layout, comfort and energy efficiency.

Sometimes it takes just one room to change the experience of a house. At Board House on Sydney’s Northern Beaches, architects Buck & Simple redesigned one corner of the house to create a light and open kitchen and living area that has become the new heart of the home. Using basic passive solar design principles and built on a $173,000 budget, Board House is now net-zero energy and much more comfortable year-round.

Anina Rich and Mark Williams lived in the house with their two young children for five years before renovating. Built around the mid-twentieth century, the triple-front brick house originally faced west until the local arterial route, Pittwater Road, was expanded, cutting into the front of the suburban block. With access changing to a parallel street, the front of the house was reoriented to the north-east with multiple additions of a second living area, bathroom and laundry. This however resulted in a tight floor plan, enclosed internal rooms, cold and dark spaces and little regard for orientation or outlook. Anina and Mark engaged Kurt Crisp and Peter Ahern of Buck & Simple to create a more liveable, sustainable home by improving the floor plan, enhancing the passive solar design and reducing the environmental impact.

The designers removed the additions and rebuilt the north-east corner to accommodate a new kitchen and living/dining area, and reconfigured the centre of the house to enlarge the main bathroom and one of the children’s bedrooms. In doing so, the internal footprint was reduced to create a northeast courtyard and a covered front entrance. “The reduction of the footprint of a house to put a courtyard in is a hard sell, but we knew it was required to make the new room work,” says Kurt. 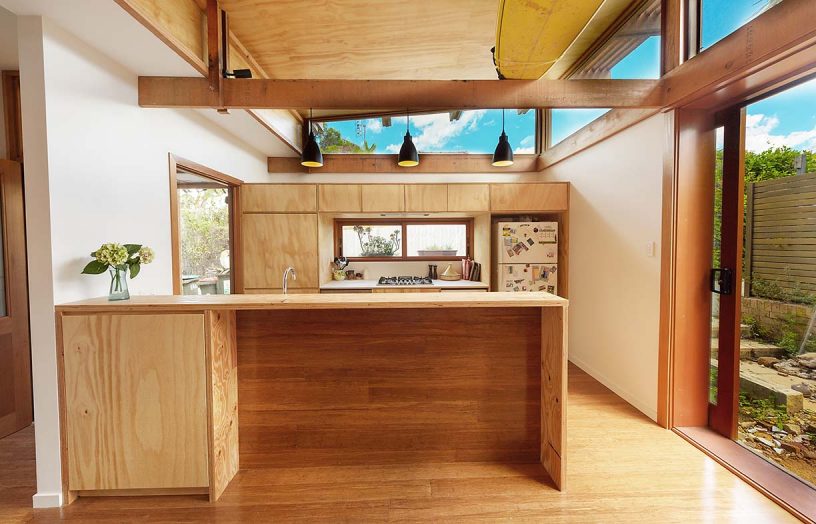 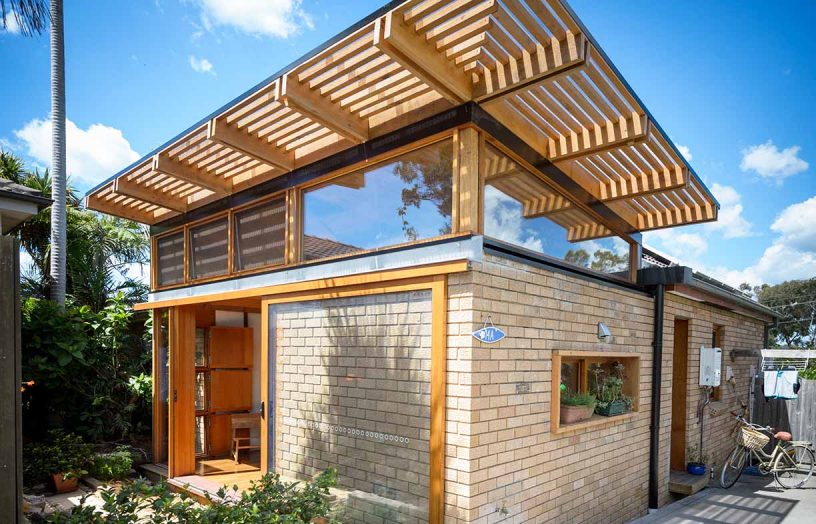 (Image 1) The internal floor plan was reconfigured to relocate the kitchen to the northern corner of the house; the room was reduced in size to allow for a new courtyard garden. Laminated veneer lumber (LVL) is used for the kitchen island, the floor is bamboo recycled from the original house and the ceiling and joinery are made from plywood. (Image 2) The addition of a ‘lantern’ roof in the new kitchen/living area brings in natural light from the northeast; exposed Oregon timber eaves with polycarbonate roofing shade the clerestory windows. Although the house footprint needed to be reduced to make the new design work, the building has been reinforced to support a second storey, should that be required in the future.

The new structure retains the northern brick wall, with some of the original bricks reused in the eastern return. A skillion roof extends into oversized eaves for rain and sun protection and high-level windows allow for light, ventilation and views. Three east-facing windows have flyscreens with internal timber hatches operated by a simple pulley system. Timber hatches also cover the corner windows, which offer views of the surrounding plants, and the adjacent courtyard is accessed via a large sliding glass door. This was one of Buck & Simple’s first projects, and Kurt and Peter have since incorporated the raked ceiling, now with operable windows, into many other projects, as the hatches can be left open seasonally to release hot air, removing the need for air conditioning.

The entrance is now clearly legible on the northern side of the house and is designed as an external wet area. (The house is a five-minute walk to the beach and the family are keen surfers.) A cupboard-like space has a shower; decking covers a stainless-steel dish; and surfboards are stored on timber beams overhead. There is also direct access to the renovated main bathroom, so that water and sand aren’t dripped through the house.

The front door opens to the new kitchen and living/dining area, which has become the hub of Mark and Anina’s home. “We discussed how they would use this room and what they would use it for, and they’ve far exceeded that,” says Kurt. With a high ceiling, clerestory windows and a connection to the outdoors, the room is light, open and comfortable – a vast difference from the previous kitchen, dining and living areas, which were dark, cold and always needed the lights on. The raked ceiling also allows for more surfboard storage, with Oregon timber beams held by detailed vertical struts. The builder recycled the timber studs from the walls for interior details. 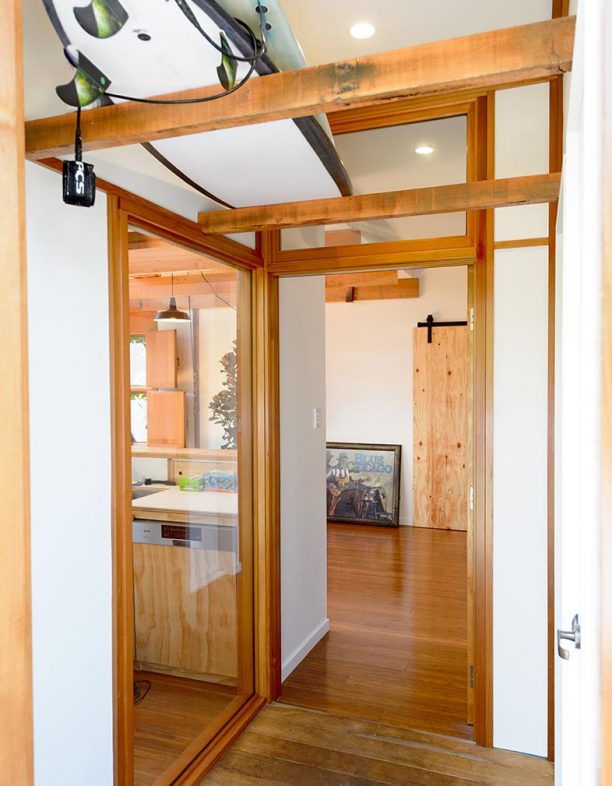 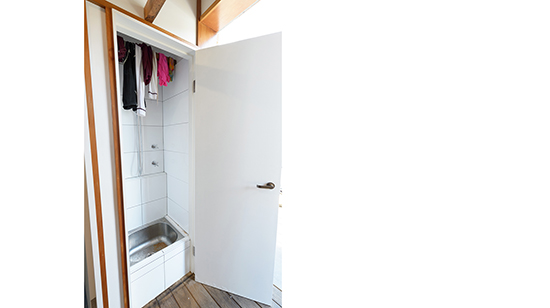 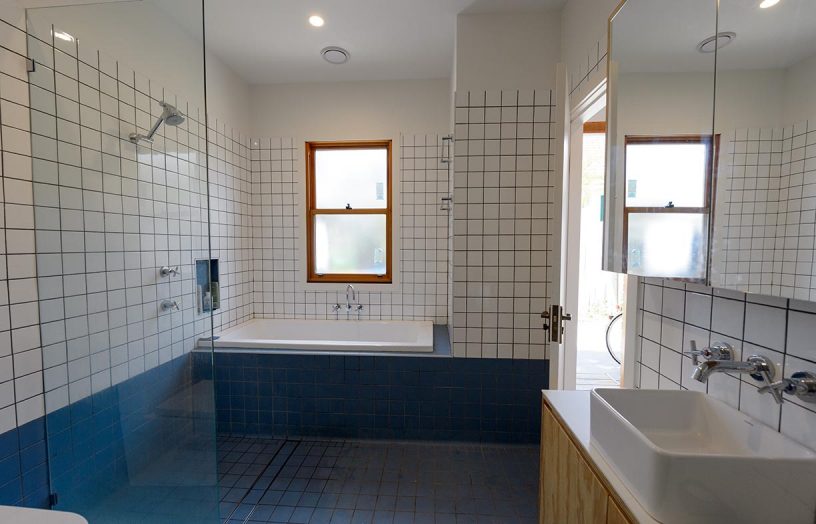 (Image 1) Exposed Oregon beams also double as surfboard storage racks. A fixed window between the kitchen and hallway separates the spaces while allowing natural light to penetrate the centre of the house. (Image 2) Rather than a mudroom at the entry, this beach-loving family opted for a new kind of ‘shower’ cupboard beside the bathroom, where wetsuits and feet can be rinsed of sand. (Image 3) Instead of two bathrooms, the house now has one that’s large enough to accommodate everything, including two access doors – one off the hallway and the other near the front door for efficient after-beach rinsing.

Mark and Anina had a supply of bamboo flooring from a previous renovation that was reused, and plywood lines the ceiling. The couple selected a standard-grade plywood with patched knots and enjoy the variation in the material. The kitchen is also plywood, crafted by local studio Mr and Mrs White.

The central dining room was divided to create an oversized hallway, enlarge one of the bedrooms and reposition the laundry. Two sliding timber doors alternately and efficiently conceal the bookshelves in the hallway or enclose the children’s bedrooms. The structure of the rear living room was also upgraded to support a future second storey.

Through simple passive design strategies and a consideration for light, ventilation and outdoor connections, Board House has become far more comfortable, liveable and energy efficient. “It’s really turned into a one-room house,” says Kurt. “Everything happens in the new room. Work, kids and family life.” 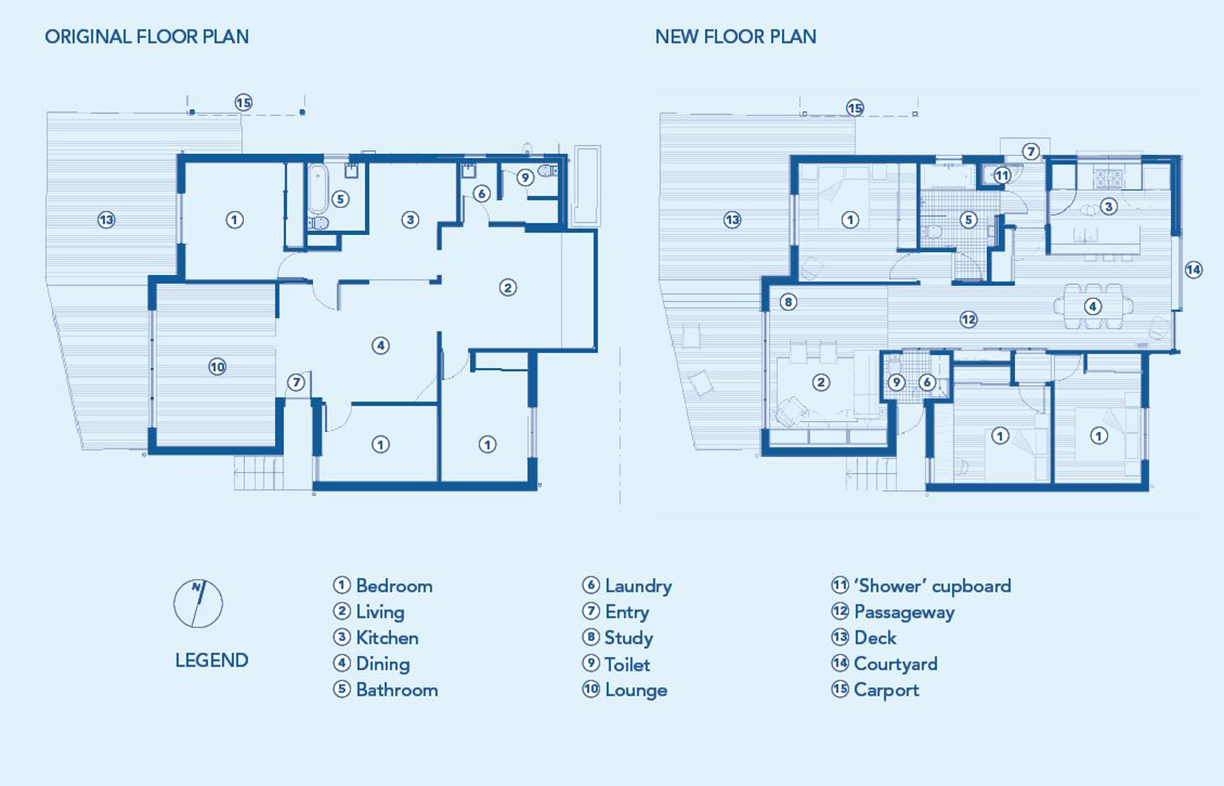