From fibro to fabulous 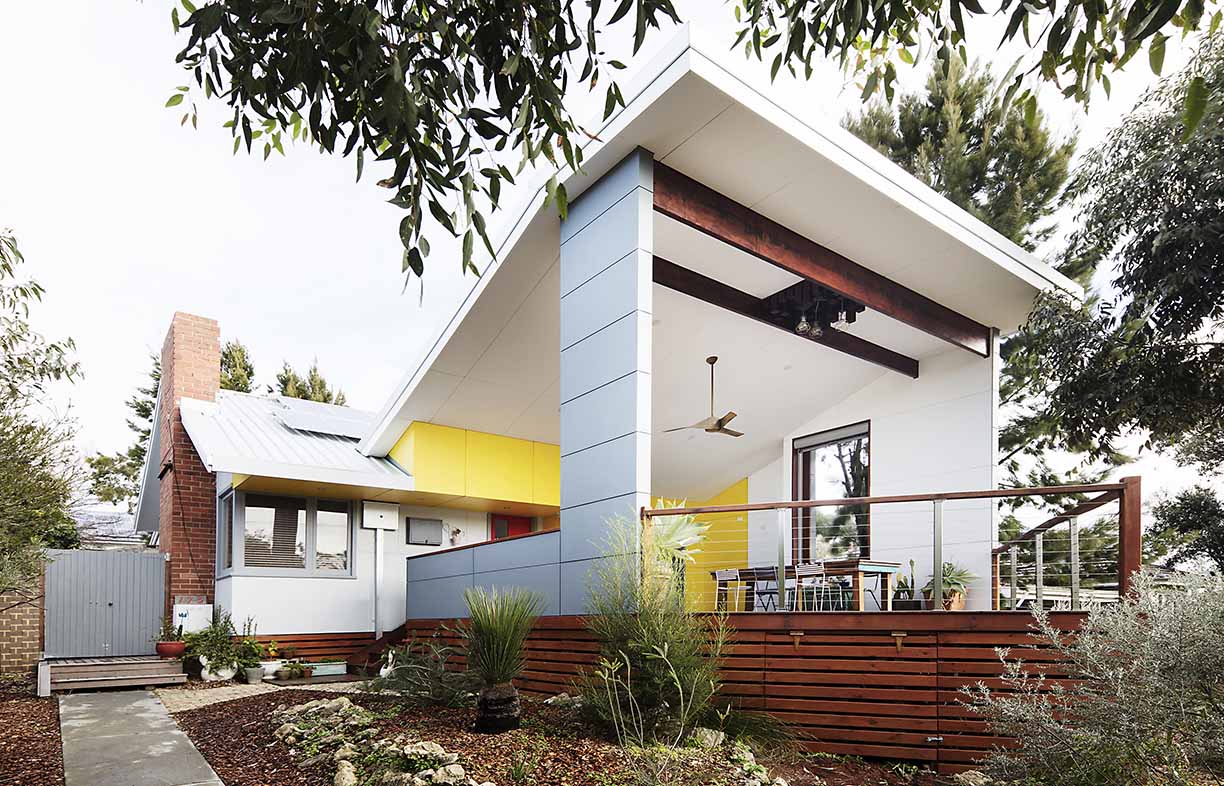 “The design challenge in this project was to balance Brad’s desire for boldness with his preference to retain the structure and modest character of the original cottage,” says designer Jeremy Coggin about White Gum Valley House. His answer was an eye-catching semi-enclosed verandah added to the north-facing front of the house for extra living space; yellow detailing contrasts with the grey of the heritage cottage.

Often poor performing and riddled with asbestos, is Australia’s ubiquitous fibro shack worth keeping? These two families on opposite sides of the country said yes, opting for renovations and extensions that vastly improved the liveability of their humble homes.

Hands up who grew up in a fibro house? In the 1950s and 1960s, a shortage of building materials after the end of the Second World War combined with a housing boom saw a big increase in the use of fibro, with entire suburbs being constructed largely from it. Short for fibrous cement sheet, fibro had the advantages of being cheap, durable, low maintenance and fire-resistant.

Before the health hazards of asbestos were known, most fibro made use of this ‘wonder’ fibre to reinforce the thin cement sheets. And while asbestos was phased out of use in the 1980s, there are still thousands of mid-century fibro houses in suburban and rural Australia.

Changes in taste, a preference for larger houses and modern concerns about living with asbestos have led to a trend for pushing over our fibro housing stock and rebuilding. However, as two renovation and extension projects demonstrate, there’s an alternative approach that helps preserve this important contribution to our vernacular architecture and the embodied energy already invested in the building. What’s more, the necessary removal of the asbestos cladding allows easy access for upgrades to the thermal envelope.

We look at fibro houses in Fremantle and Sydney that have been retained and upgraded to be much better performing than the originals, providing energy-efficient and comfortable living for two young families.

Fremantle Mayor Brad Pettitt bought his 1950s fibro house in Fremantle, WA, about 15 years ago. “It was in pretty poor condition, and every bit of advice I got was that it’s such a great block with amazing views, you should just knock the house over and start again.” But for Brad, then Dean of the School of Sustainability at Murdoch University and an advocate for sustainable building, the aim was always to adapt the house and reuse as many of the materials as possible. “It’s part of the Freo vernacular – the area is famous for its Federation buildings, but there is lots of this post-war building stock too.”

Working with designer Jeremy Coggin, Brad settled on an approach that involved minimal structural changes to the existing house, instead focusing on upgrades to the thermal envelope: “I used to joke that the house performed just like a tent!”, laughs Brad. The need to remove the asbestos fibro sheet that clad all external walls and wet area internal walls was also an opportunity, as it allowed for careful insulation and wrapping of the building. The external cladding was replaced with a cement-based board to help retain the character of the original house. Along with upgrading some windows to double glazing and others with high performance glass, the result is a much more liveable and energy-efficient home.

The redesign moves the living spaces to the north for best passive solar performance. A new kitchen opens to a large semi-enclosed verandah with a soaring roof at the front of the house, extending the living space in the direction of the views over the neighbouring golf course. In contrast to the modesty of the original cottage, the extension is deliberately bold and innovative, and is a clever solution to the challenge of providing for the indoor-outdoor lifestyle Brad wanted. “In this temperate climate, if you have access to sun you can be outside pretty much all the time,” says Jeremy. “Even in winter there’s lots of sun, and this close to the beach the ‘Fremantle Doctor’ provides a reliable early afternoon breeze.” 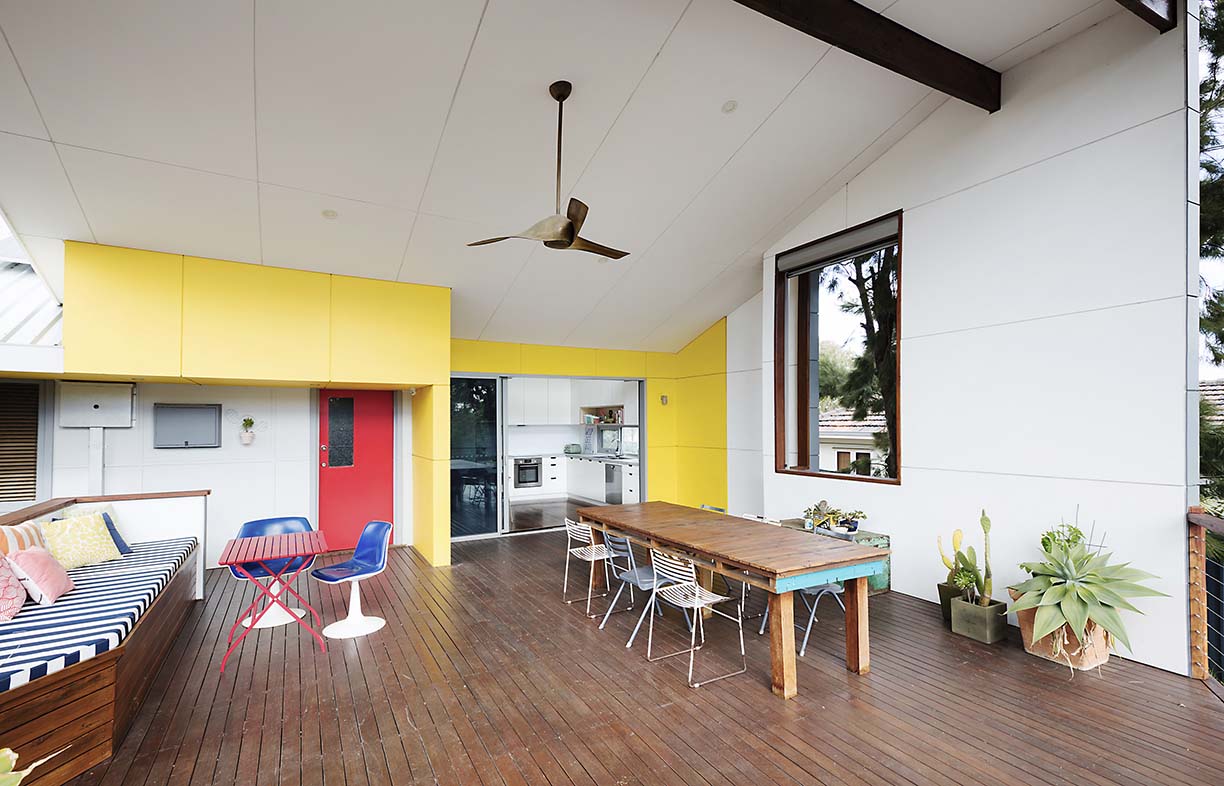 The 67-square-metre verandah is “the most used part of the house – we live out here for about nine months of the year,” says homeowner Brad Pettitt. It’s open to the north for solar access and to take advantage of views, and has a floor of recycled jarrah. 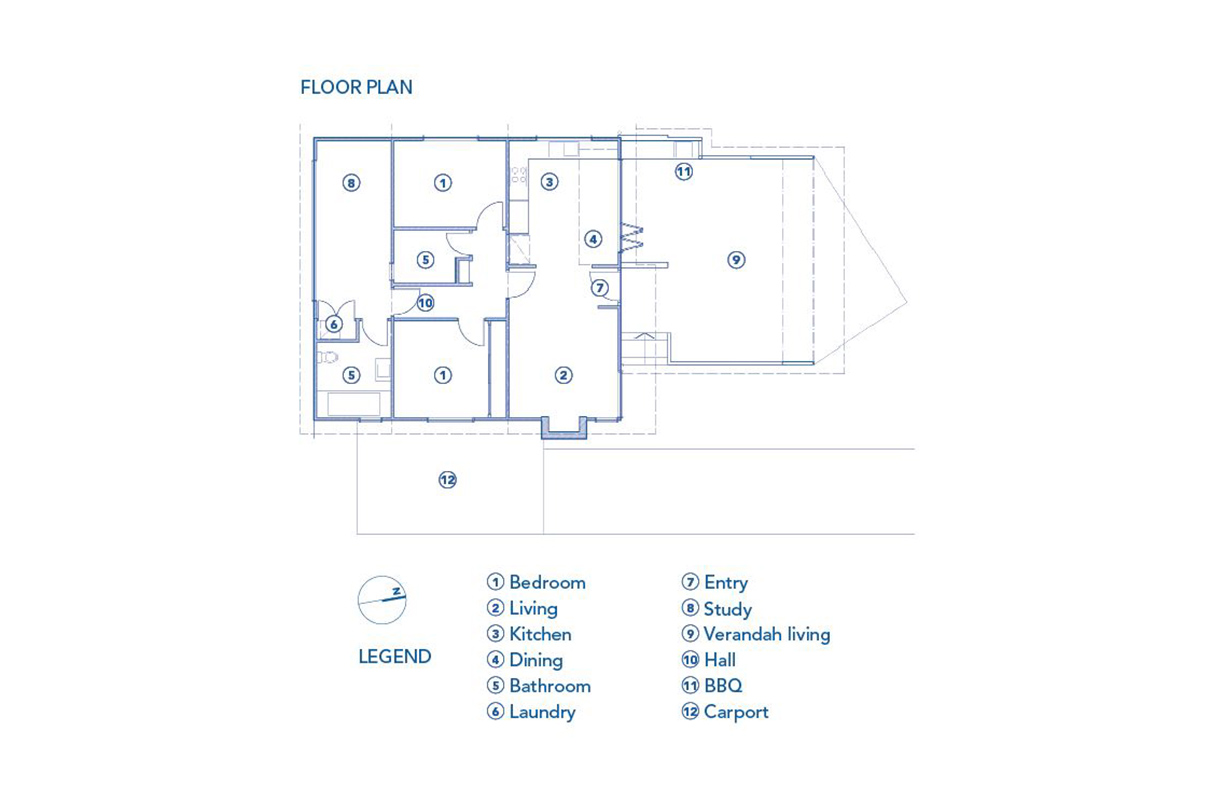 In North Ryde, NSW, Scott and Rachel Fallowfield have also chosen to upgrade and extend their tiny fibro cottage. “The middle ring of Sydney suburbia is going through a phase of knocking down all the fibro houses and building gargantuan McMansions,” says their architect Andy Marlow of Envirotecture. “These homeowners wanted to improve the way in which they lived but wanted to avoid that trend – they didn’t need their finished house to be huge.”

Structurally, the house was fine. “The only issues were that it was entirely clad in asbestos sheets, and had no insulation,” says Andy. Envirotecture’s design retains the house with almost no floor plan changes, and adds an extension at the back along the southern boundary, allowing for excellent northern solar access, well considered shading and a good connection with the garden. The extension contains a new kitchen, living and dining area, with a second bathroom positioned between the old and new parts of the house. To provide contrast with the original structure, it’s clad in a combination of weathering steel and recycled hardwood fence palings.

Replacing the cladding on the original house was the last part of the project. Andy notes that although there’s a cost to remove and dispose of asbestos sheets, the fact that it’s fairly easy to do gives rise to opportunities: “This kind of cladding is always on a lightweight timber frame, which makes it simple and relatively inexpensive to insulate, wrap the building and reclad. There’s also the chance to change the aesthetic of the building, but Scott and Rachel chose not to alter it much, to retain the cottage’s character.” The house was reclad with environmentally friendly magnesium oxide sheets with strips of zincalume covering the gaps. “It looks fantastic, and is low maintenance too,” Rachel says. 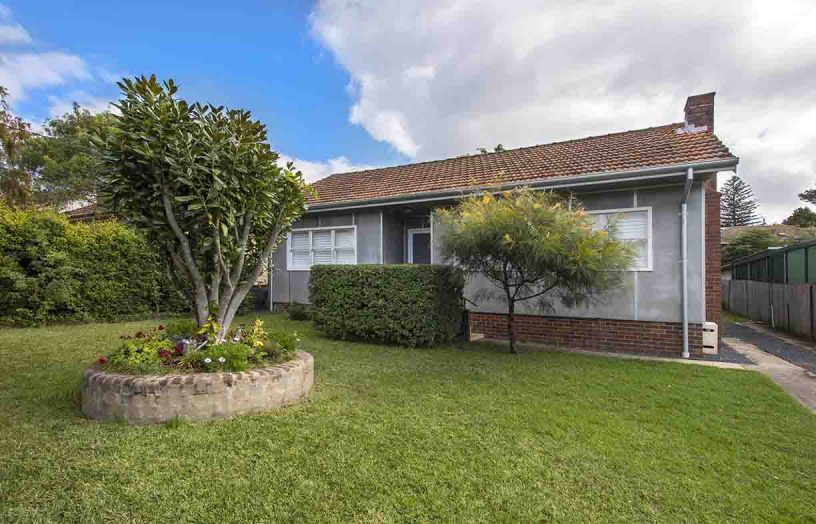 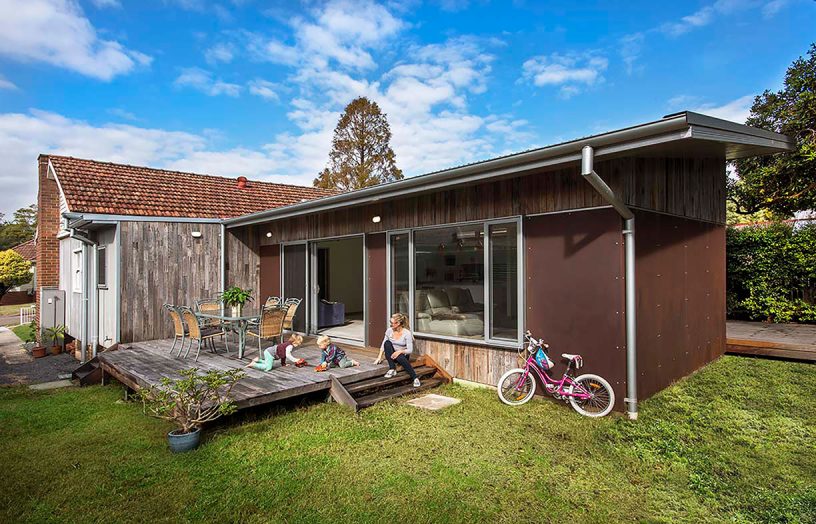 (Image 1) Keen to preserve the character of the original house, Scott and Rachel opted to reclad it in magnesium oxide sheet once the asbestos-containing fibro was removed and the structure insulated and wrapped. (Image 2) Clad in weathering steel and recycled fence palings to provide a clear aesthetic distinction between old and new, the rear extension to the Fallowfields’ small fibro house was carefully designed to perform well thermally with minimal active heating and cooling. It also provides the extra living space the family of four needed. Images: Ute Wegmann

The thorough insulation has improved the thermal performance of the existing cottage, with Scott reporting that it’s more comfortable on the hottest days and coldest nights. The extension is very comfortable all year round.

Completed on a tight budget and without the need for the family to move out, the Paling House is a renovation success story. “I love that we have a modest street frontage that pays homage to the war service homes built in the 1940s and ’50s,” says Rachel, “but then we have a modern, environmentally responsive addition that provides us with the comforts of a contemporary build.” 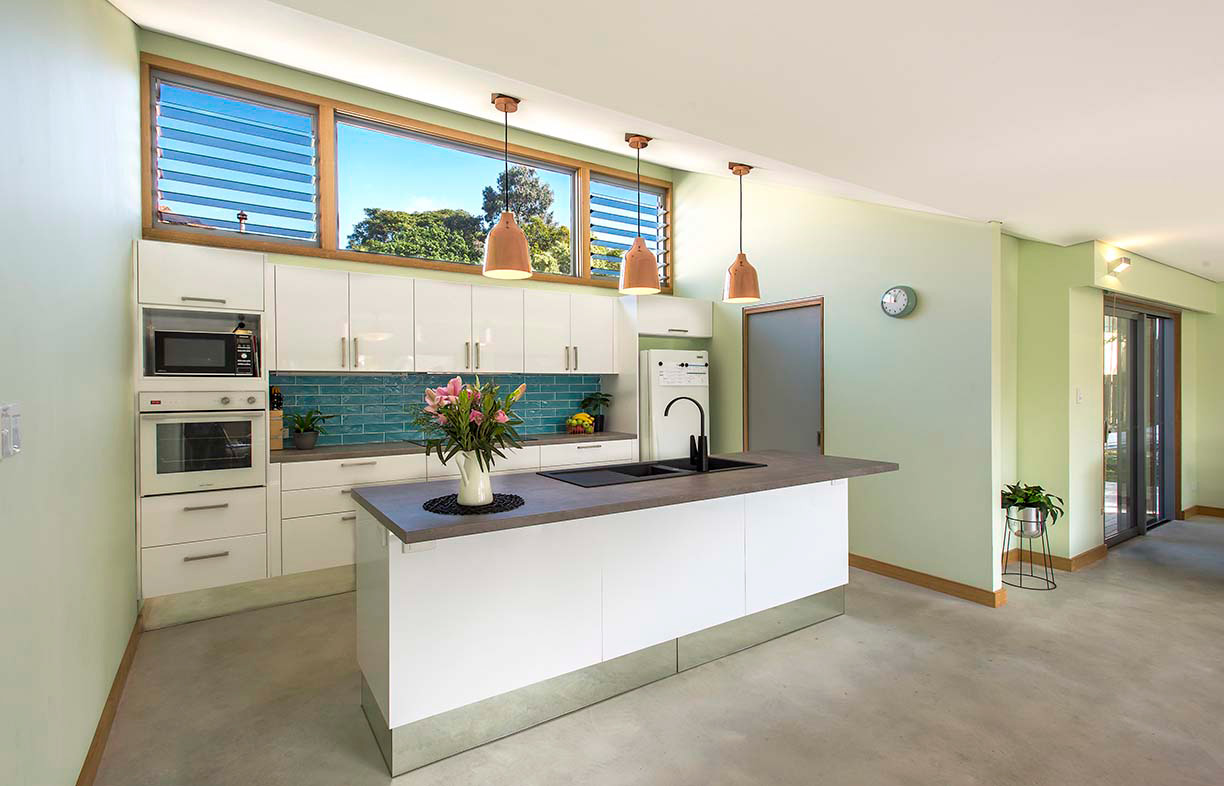 A polished concrete floor for thermal mass and high louvre windows, for ventilation, plus lots of insulation and double- glazed windows all contribute to the excellent thermal performance of the extension. Image: Ute Wegmann 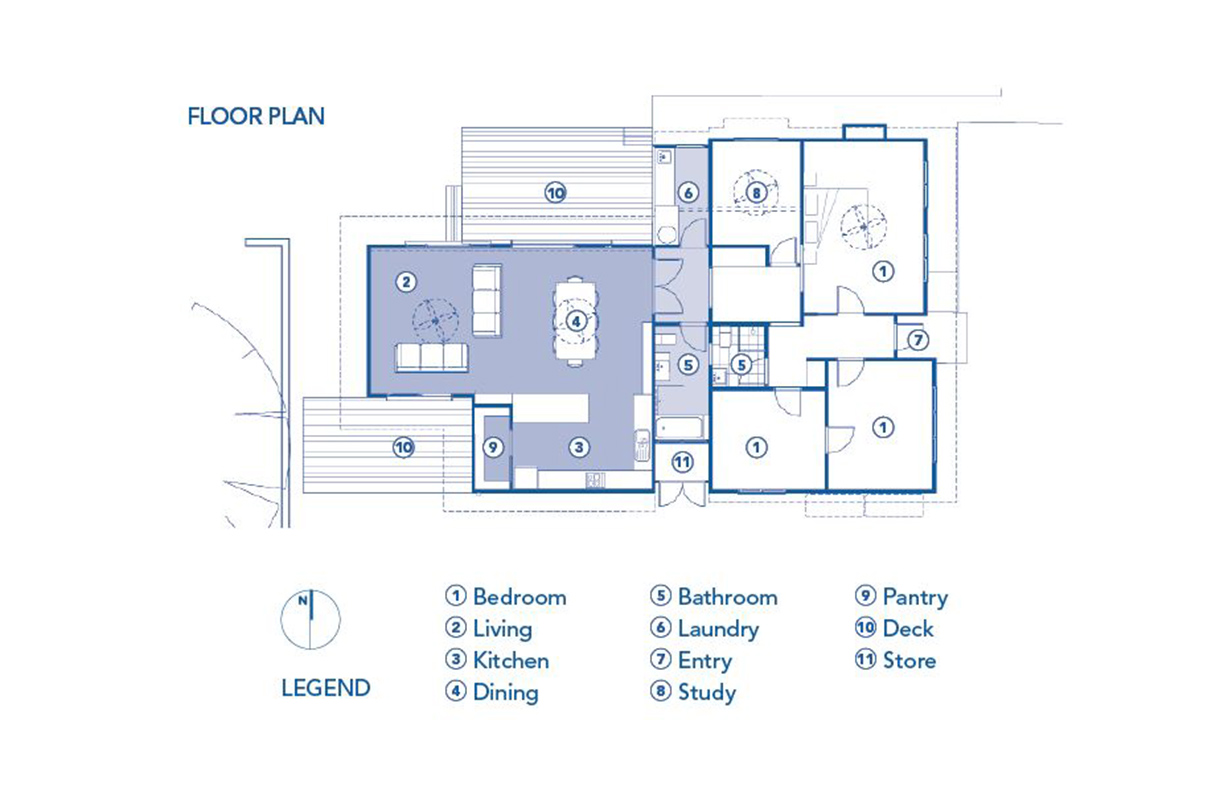