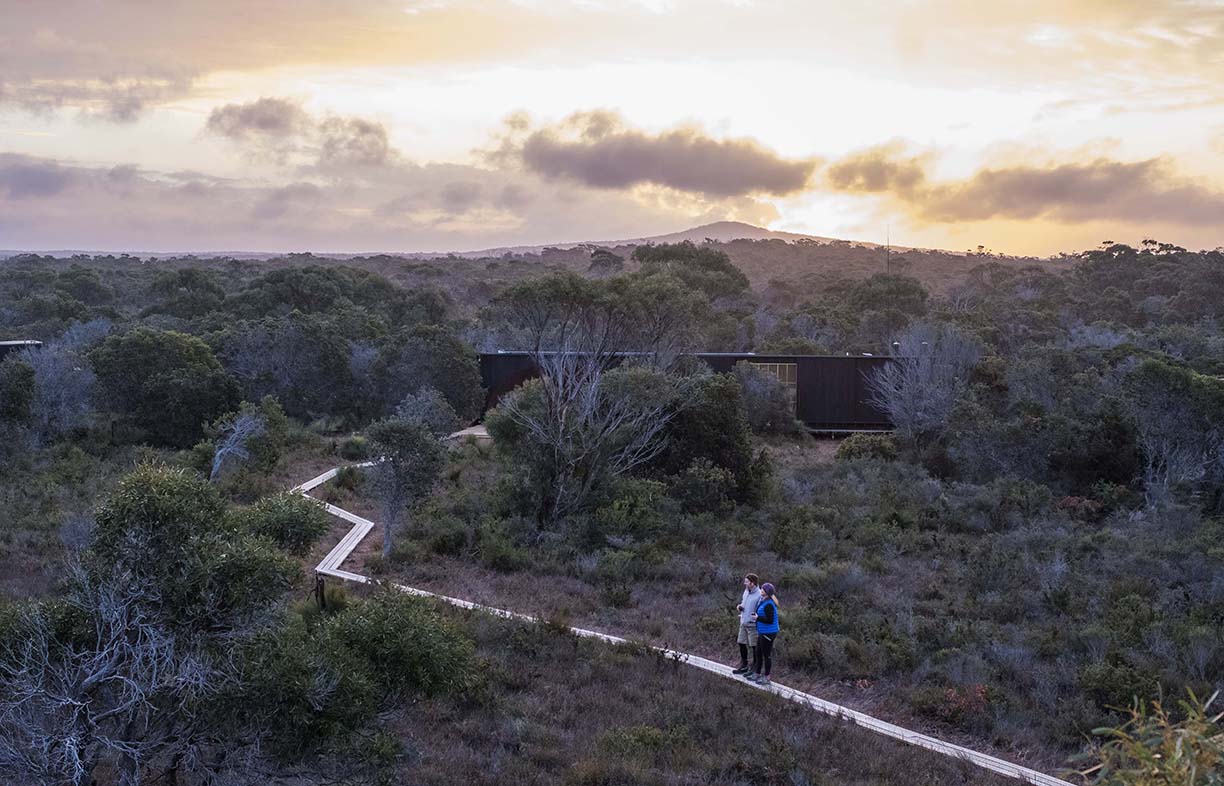 The standing camp built to support the Wukalina Walk in Tasmania’s north-east features architecturally designed accommodation; walking platforms are used to reduce the human impact in the beautiful, but sensitive, region.

If you were to hike into Tasmania’s spectacular Frenchman’s Cap as recently as November last year, the hut that greeted you below its summit, on the shores of Lake Tahune, was unlikely to leave you with great memories. Constructed in 1971, the single room un-insulated prefab hut was small and often crowded, a condensation trap, dark and a generally unpleasant place to spend the night in one of Australia’s most spectacular locations.

What you will find in its place today will give walkers a vastly more pleasant and safer experience. Opened by the Parks and Wildlife Service in April 2018, the new Lake Tahune Hut represents a new benchmark for walkers’ huts in Tasmania’s alpine wilderness, but in many ways also retains much in common with the more traditional mountain huts. The new hut is more evolutionary than a departure.

Tasmania now has a wide network of public and privately run huts in its national parks and wild places, widely varied in terms of amenity, comfort and safety. The first huts however, dating back to the 19th century, were generally constructed by trappers, highland cattlemen, loggers and miners. As these industries faded away or changed, many of these huts were utilised and adapted by early walking clubs.

“A lot of the early huts have morphed from industry-based huts into recreational huts, and the early clubs such as the Hobart and Launceston walking clubs were very good at doing up a lot of these huts and getting them in fit states for the walking fraternity,” says the recently retired head of the Parks and Wildlife Service Peter Mooney. 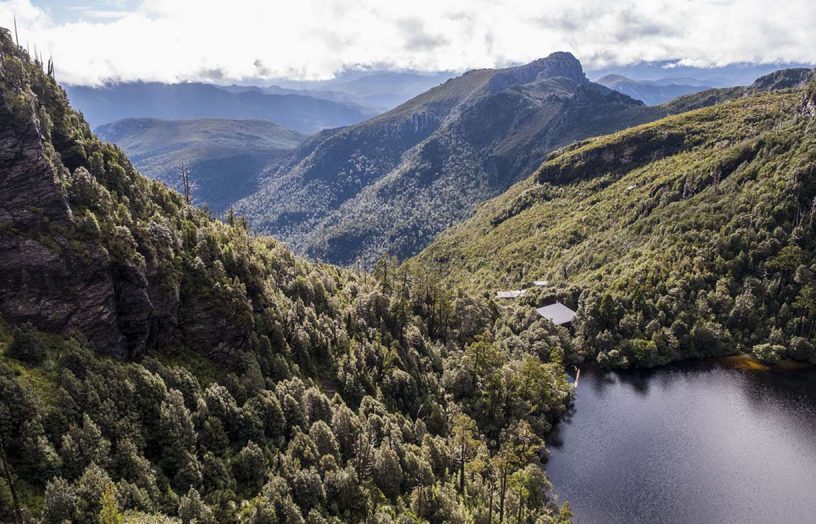 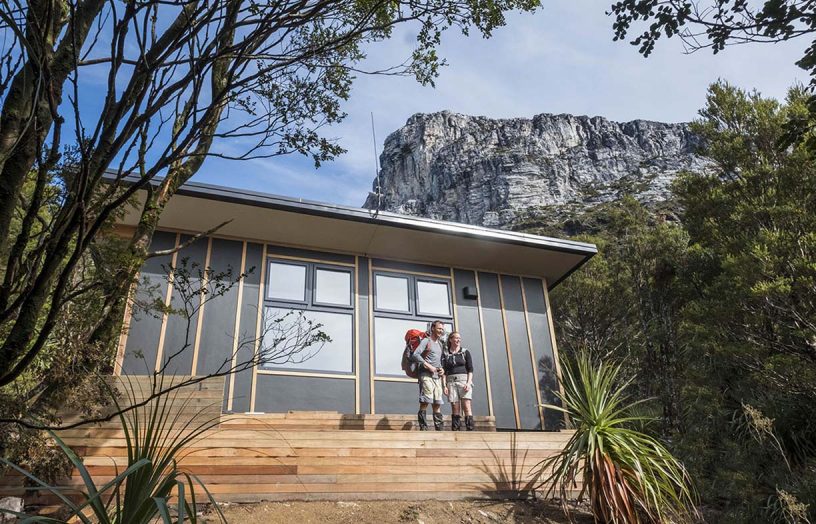 The famous and spectacular hike to Lake Tahune and Frenchman’s Cap has just got better. A new hut was helicoptered in during the summer and is now fully operational.

“But now we’ve come to the era of the modern-day hut, which is all about efficiency and longevity and built to a standard where it might have a 50-year lifecycle. Some of the early huts virtually had seasonal lifecycles, they were pretty rudimentary,” he adds.

Take any of those early bushwalkers into the recently constructed huts along Tasmania’s newest multi-day walk, the Three Capes Track, and they probably wouldn’t believe their eyes. Built to a standard not seen before in Tasmania, the three huts along the dramatic coastal experience on the Tasman Peninsula provide memory foam mattresses, gas-powered cooking facilities, charge points for mobile phones and other devices, plus an onsite ranger.

These new huts are about much more than simple creature comforts, however. In terms of response to the site, the designs, sustainability, environmental and fire risk management, they do represent something of a departure from what has traditionally been provided in Tasmania’s parks. But then, so does the Three Capes Track. Conceived as a “dry foot” walk, this experience is different to most in Tasmania in that it was developed and designed to attract new walkers, families and help people who have always enjoyed the wilderness to continue walking.

“Three generations of the same family can walk together. None of our other walks can provide that,” says Peter Mooney. “You can have an 85 year old walking with his daughter and grandson, all walking and holidaying together.” 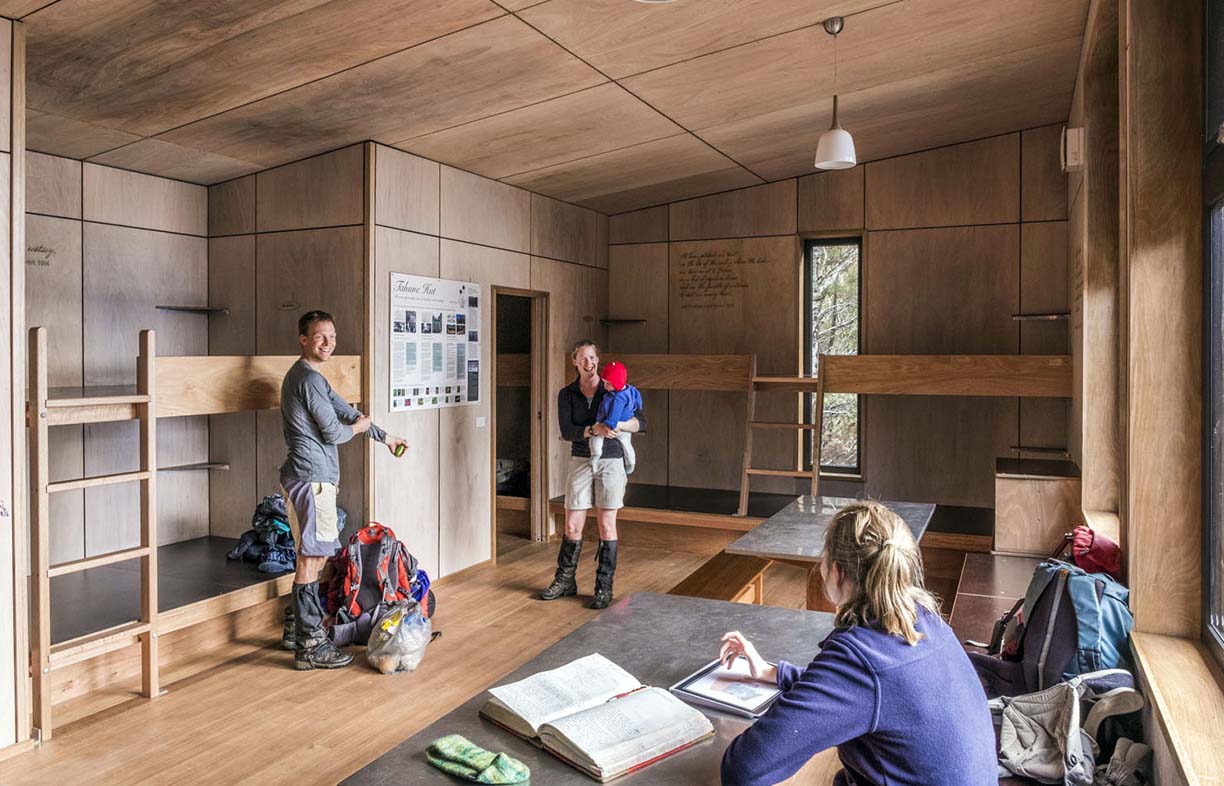 The new hut at Lake Tahune is naturally lit, has classic hiker hut bunks and is well equipped for cooking. Inside is cosy warm thanks to heat exchange technology powered by a micro hydro system that runs from a nearby creek.

The huts along the Three Capes Track also feature initiatives such as angled windows to prevent bird-strike, large decks and art features as well as the capacity to be locked down and provide an internal fire refuge in case of bushfire.

It was along Australia’s original multi-day walk, the Overland Track – traversing the Cradle Mountain-Lake St Clair National Park – however, that the need first arose for the introduction of modern walker-specific huts. Many of the original huts along the 65km western highlands walk were either early pioneers’ huts or early bushwalking huts, often now too small to cope with growing walker numbers, or built in inappropriate cold and damp areas.

Some of these huts have been replaced or superseded by newer versions, with the parks service maintaining a policy of replacing huts – except where they have historical value – rather than duplicating them. It has been something of a learning curve for the department however, with mistakes having been made with issues including orientation, heating sources, gaps and draughts and lack of insulation, right through to the most recently built, the Bert Nichols Hut, opened in 2008.

It was also along the Overland Track that Australia’s first privately run guided and hutted walk was established over 32 years ago. Cradle Huts Walk, now operated by the Tasmanian Walking Company, introduced a new level of comfort, for those able to pay for it, at a time when guided walking was barely heard of in Australia. Their huts, which began as “comfortable bush huts” have evolved over time in line with environmental regulations and client expectations, but still retain their original small footprints and basic but comfortable amenities. TWC’s General Manager, Heath Garrett, says there are numerous efficiencies now in place, including ‘batch’ toilets, where human waste is removed twice yearly in tanks by helicopter rather than composted, solar-powered lighting rather than candles, extensive greywater treatment and even careful menu design to minimise grease and fats.

“The two key drivers now are guest expectations and developments within sustainable design,” says Heath. “It’s a challenge for us as an operator because we need to ensure that we are as sustainable as possible, especially given the sensitive areas that we operate in.”

It’s proven a challenge for the parks service as well over time and, according to the project manager for the Lake Tahune Hut, Steve Overton, this new hut has got the model about right for most Tasmanian walks. 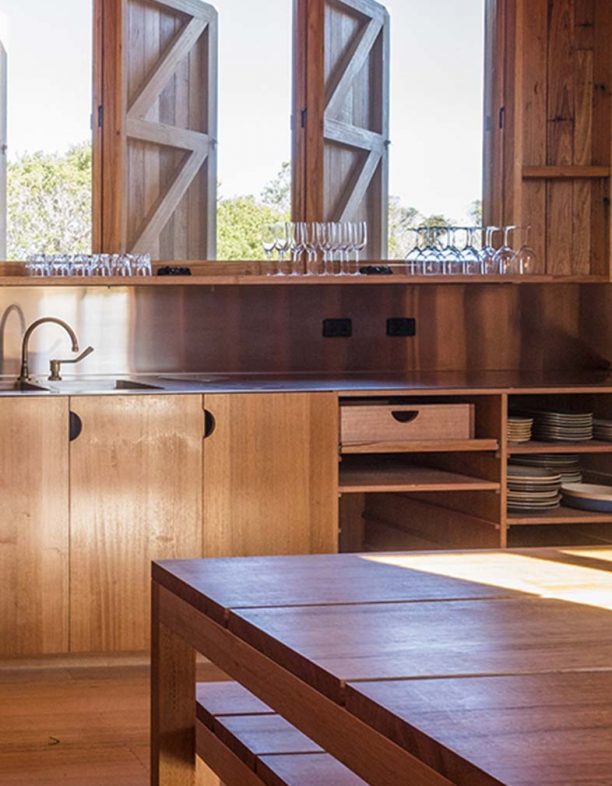 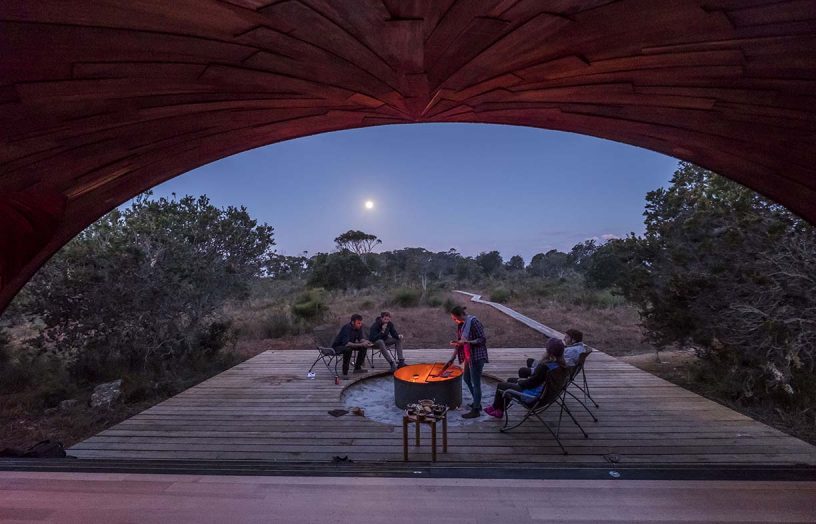 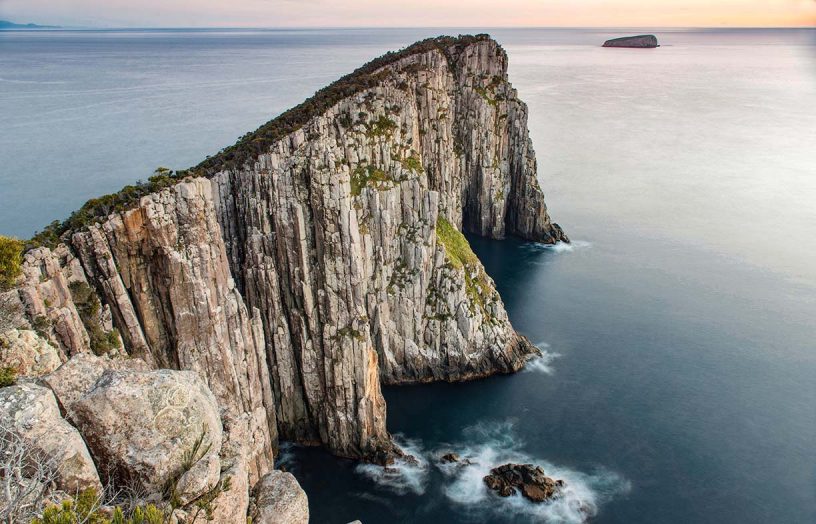 The Aboriginal Land Council of Tasmania has recently opened the Wukalina Walk (left). The buildings are designed to be low-impact, hardy and comfortable. In the communal areas shutters can be opened or closed depending on the weather. Distinctive, half-dome structures were designed in consultation with the local Aboriginal community and mirror those once constructed by the Palawa (top right). Already you need to book well in advance to take advantage of the new Three Capes Track which takes you through some of Tasmania’s most spectacular landscapes (bottom right).

“The passive solar nature of that building and the high thermal efficiency, with masses of insulation and all air gaps sealed, means that this hut’s focus is on retaining heat and this sets a new standard,” he says. “We’ve had missed opportunities with more recent huts, where due to poor architecture and design and not capitalising on basic features, such as not beefing up insulation, closing air gaps or even failing to insulate under floors, has meant poor performance.”

The Lake Tahune Hut was constructed using a pre-fabricated system where floor, wall and roof panels were constructed in a workshop, trucked to the Lyell Highway and then helicopter-lifted into the site complete with insulation and triple-glazed windows in place. The construction crew only had a narrow window of time to work in, as well as contending with some of the most challenging alpine weather in Australia. While the interior is true to the spirit of earlier huts with bunk bed platforms only, along with stainless steel topped tables and cooking benches, it also features electric lighting and heat exchange technology, thanks to a beautifully concealed micro hydro-electric system built into the creek flowing out of the lake. A simple but important initiative is the heated “mud room” at the entrance, meaning that wet boots and clothing can dry there rather than condensate the main room.

Designed by Uta and David Green of Hobart’s Green Design, the Lake Tahune Hut is heading towards the kind of thermal and environmental standards found in some European walkers cabins.

A world away from Frenchman’s Cap in the north-east corner of the island is yet another model of walker accommodation and a first for Tasmania. The Wukalina Walk was established by the Aboriginal Land Council of Tasmania and is the first indigenous walking experience in the state. It’s based in the same area as the famous Bay of Fires Walk, with its groundbreaking low-impact lodge, and differentiates itself from that experience by focusing on the stories, mythology and traditions of the Palawa people who once occupied the region. Walkers spend two of their three nights on the walk staying at the inspiring, newly constructed standing camp, krakani lumi. 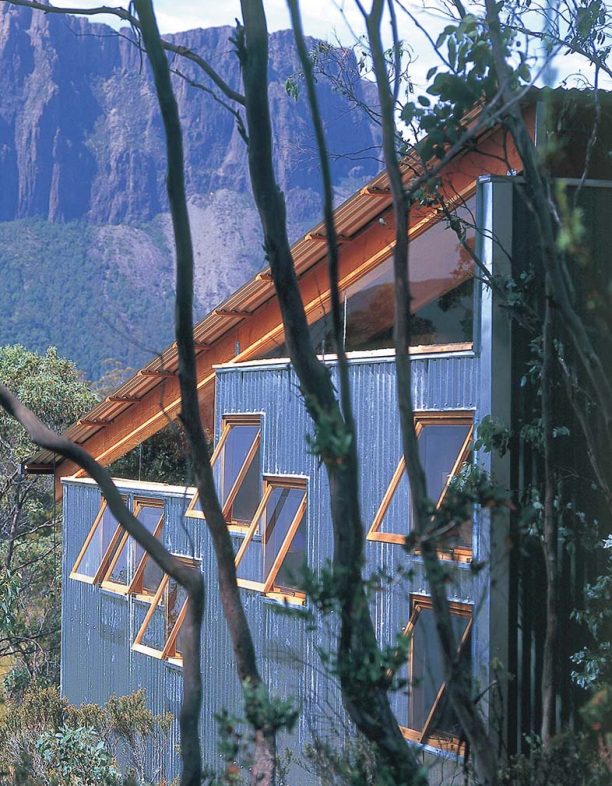 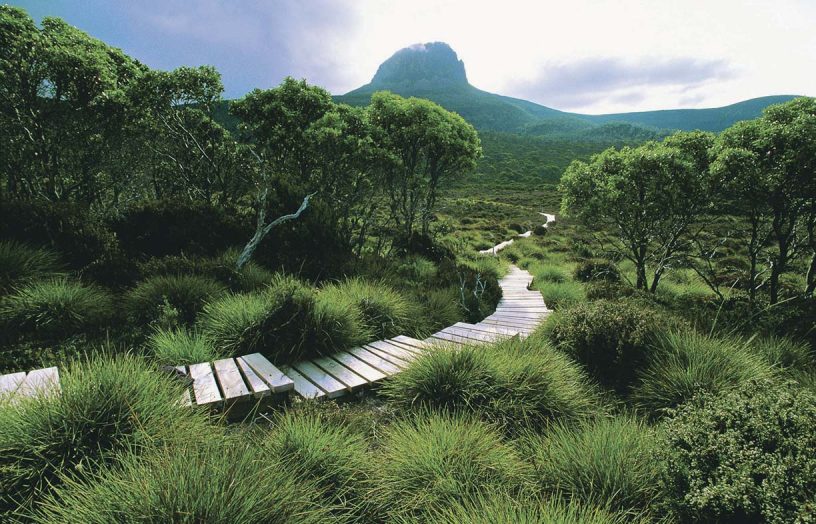 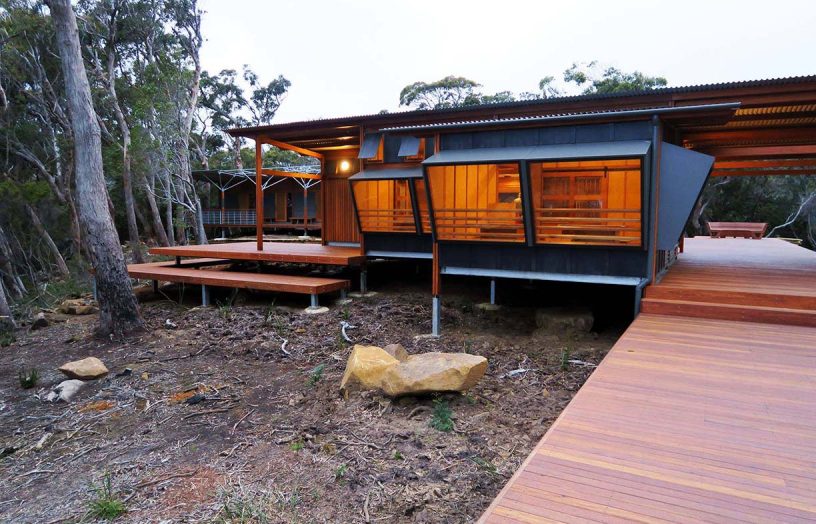 The new investment in hiking-specific huts has also benefited the Overland Track – where previously huts were cold, damp and inadequate for growing walker numbers (left). The comfortable wilderness huts on the Three Capes Track have windows angled down to avoid bird strike, and can be locked down to become a refuge in the case of bushfire (bottom right).

For the project’s architects, Poppy Taylor and Matt Hinds, working closely with the Aboriginal community and responding to the krakani lumi site strongly informed their designs. The remarkable half-domed structures of the main social area and the sleeping huts mirror the structures once built by the Palawa, while the positioning, orientation and materials used mean that the buildings literally disappear into the wall of banksia behind and only become visible on approach.

Nature-based tourism is booming in Tasmania, placing more pressure and demands on infrastructure within the island’s wilderness areas. There are already other private and public walking developments, both in the planning stages and already under construction, but recent developments, including the Three Capes Track, the Lake Tahune Hut and the Wukalina Walk, demonstrate that responding to the Tasmanian environment and landscape pays dividends for walkers, infrastructure longevity and the natural environment that they are so lucky to occupy.