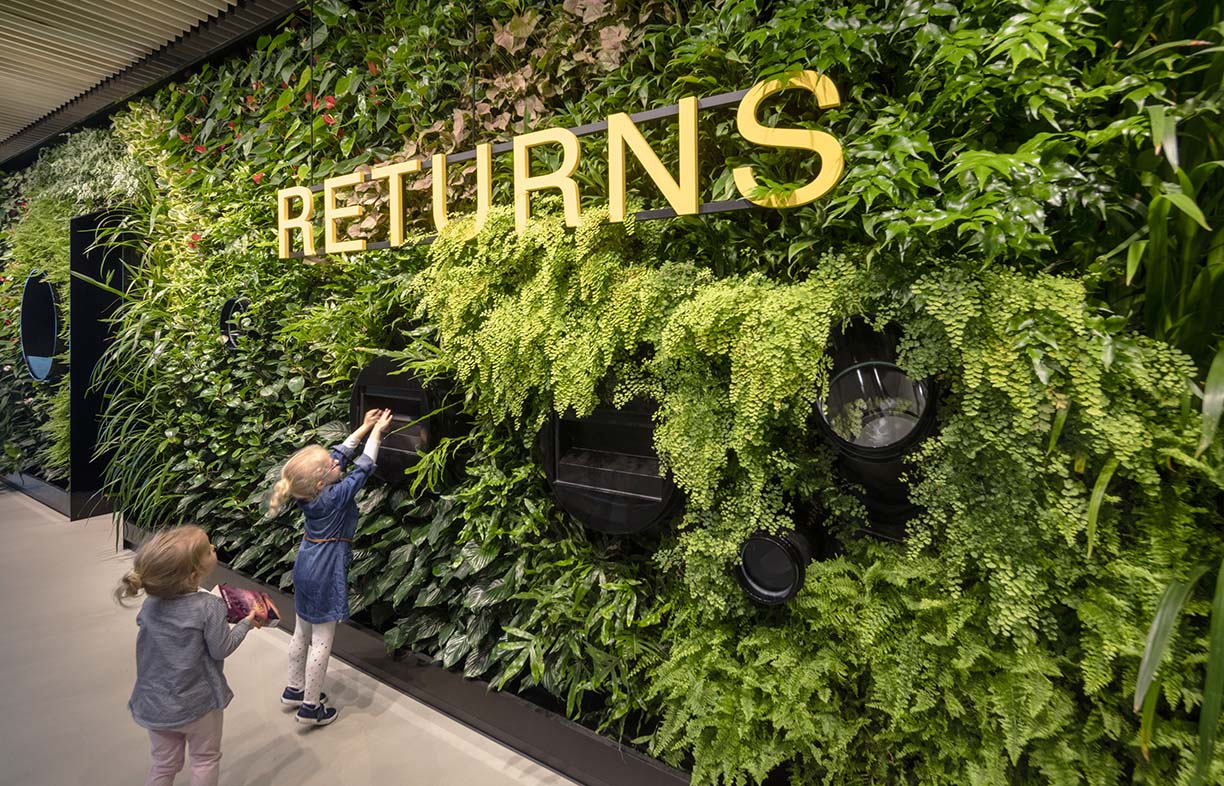 Libraries are going green, in more ways than one. Architects BVN’s design for the new Woollahra Library at Double Bay in Sydney was inspired by its previous location in the lush Blackburn Gardens, and features vertical gardens and organic-shaped voids lined with hanging plants. Image: John Gollings AM

Far from disappearing into obscurity as the world goes digital, libraries around the world are being reinvented as vibrant community hubs. The best examples demonstrate environmental sustainability in their design as well as contributing to the social sustainability of their communities.

The old stereotype of dusty shelves and the dread of being shushed by the librarian has no place in modern library spaces. In Australia, library attendance is on the rise every year, as the community does more than borrow books. Libraries have made themselves a partner in people’s lives by responding to an ever-changing social brief, meeting current community needs and anticipating those of the future, in a variety of fields from art to health, civic engagement, education and technological literacy.

Increasingly, physical book and journal collections are being digitised, freeing up essential space. The integration of garden and landscaping blurs the line between indoor and outdoor spaces, and building systems that monitor and maintain thermal comfort and air quality encourage longer visits. Flexible, multifunctional spaces can serve as meeting rooms, technology hubs and classrooms for learning programs that educate and support. Libraries are acting as places that encourage debate, places to gather and share important information and fact-check. And as the effects of climate change are increasingly felt, they are also anticipating the need to function as community havens during and after emergencies, as happened in the 2009 Victorian bushfires and the 2011 Queensland floods.

Libraries are relieving transport congestion by supporting telecommuters and encouraging the sharing of resources by providing access to items like audio equipment and sewing machines. By consulting with people who aren’t currently using their facilities, they are devising strategies for getting more local involvement. For instance, some libraries are including creative technology hubs offering virtual reality equipment, robotics, laser cutters and 3D printers as well as assorted courses in their use, designed to support transitioning workforces and younger students not following traditional pathways. 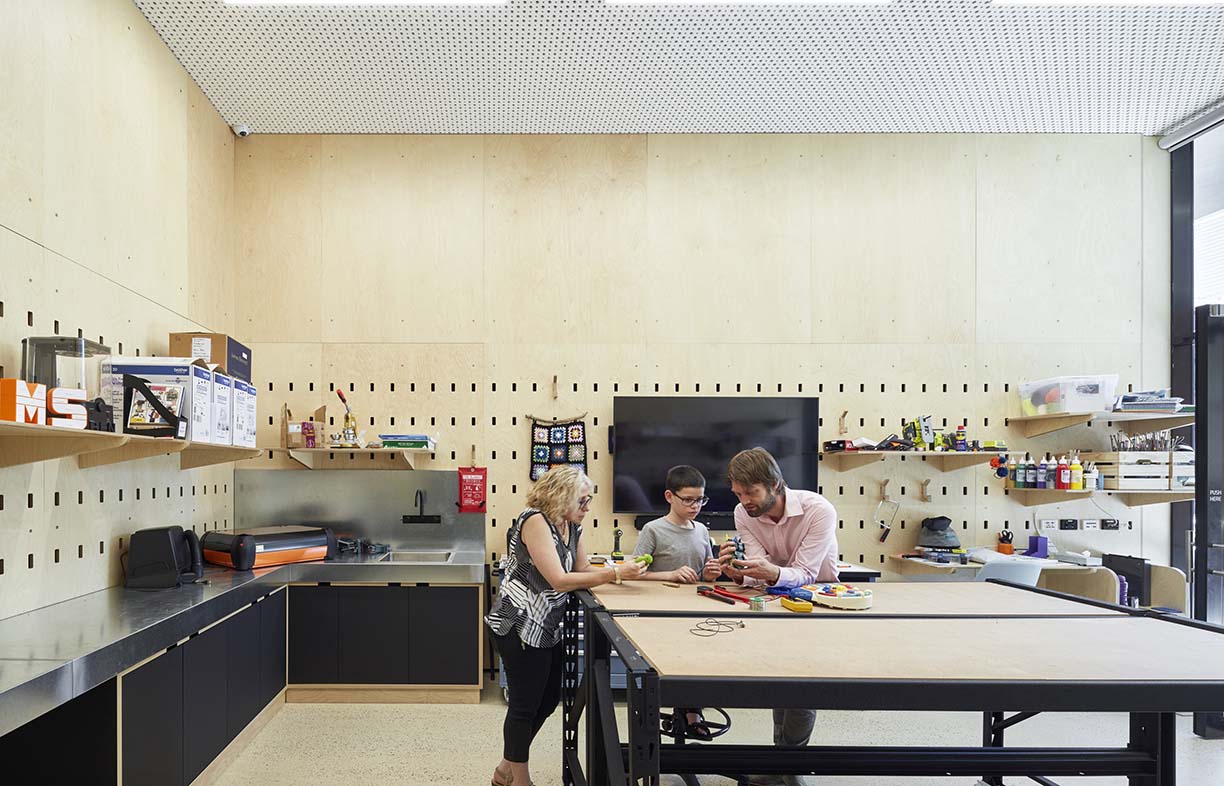 South Australia’s JPE Design Studio designed the new Parks Library in Adelaide to be “future focused, innovative, adaptable and reflect the needs and desires of the local community”. It features a central garden, meeting rooms, an audiovisual studio and a creative ‘makerspace’. Image: Sam Noonan

At some libraries, extended opening hours accommodate shifts in the working week – the West Gippsland library in Victoria recently introduced 24-hour access to its Foster branch for members – and as the political climate creates instability for our most vulnerable people, libraries have become a welcoming place for refugees and asylum seekers.

Library best practice has been guided by the International Federation of Library Associations and Institutions (IFLA) since it was founded in 1927; today more than 150 countries are IFLA members, including Australia. In addition, our governing body, the Australian Library and Information Association (ALIA), manages a large online resource of research reports and strategic frameworks that are continually updated and build on each other to guide library development. ALIA also hosts library design awards.

Paula Kelly Paull is Learning Communities Manager at Hobson’s Bay City Council in Victoria, and as an ALIA board member she has been influential in the design and updating of many of Melbourne’s public libraries, keeping them relevant well into the 21st century. She describes her three guiding principles: “Access to collections, facilities and expertise for all; capacity building; and connectedness: these pillars reflect what’s informing library design and practice today.

“Library design matters, because beautiful places matter,” she says. “The facilities need to be accessible, beautiful and enjoyable places to spend time in, so people make maximum use of them.”

Last year, for the first time, a public library was crowned Building of the Year at the World Architecture Festival. LocHal Public Library in Tilburg, Netherlands, is a spectacular reimagining of a long-defunct historic train depot intended for demolition. Built in 1932, much of the building’s original structure has been preserved, celebrating its history with railway tracks still running across the floor and train wheels repurposed into the furniture.

By preserving and integrating the original structure, lead designers Civic Architects and their design team partners have taken advantage of resources already on site such as steel beams originally designed to bear the weight of heavy locomotives. This reduced new materials required for construction, and thus the embodied energy of the project.

A challenge for the architects was creating comfortable zones suited to the many required uses of the space in a hangar that is one large volume: “Although it is nearly all open space, grand textile screens enable flexible separation of areas and improve acoustics, allowing the creation of spaces for loud, collaborative discussions or quiet reading.” Moveable bookshelves allow further adaptation of spaces to meet changing requirements. Aside from the traditional facilities for book readers, LocHal has made space for capacity building with new learning laboratories: a Food Lab, Word Lab, DigiLab and Heritage Lab. 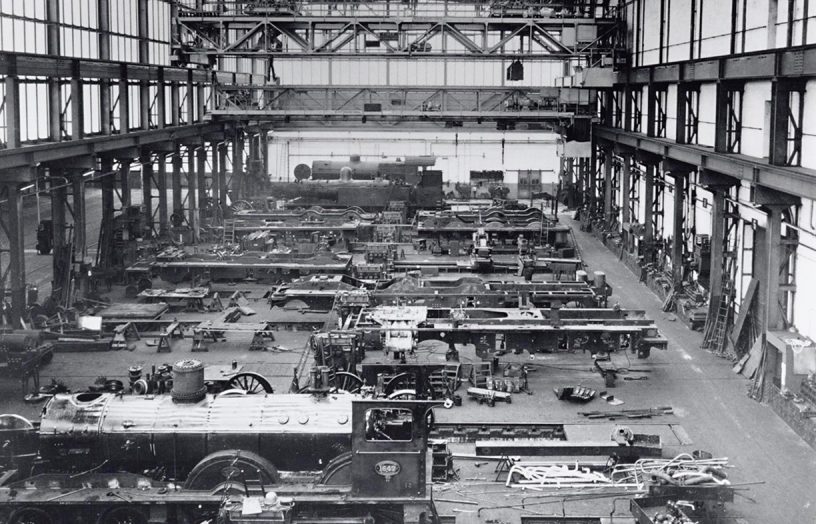 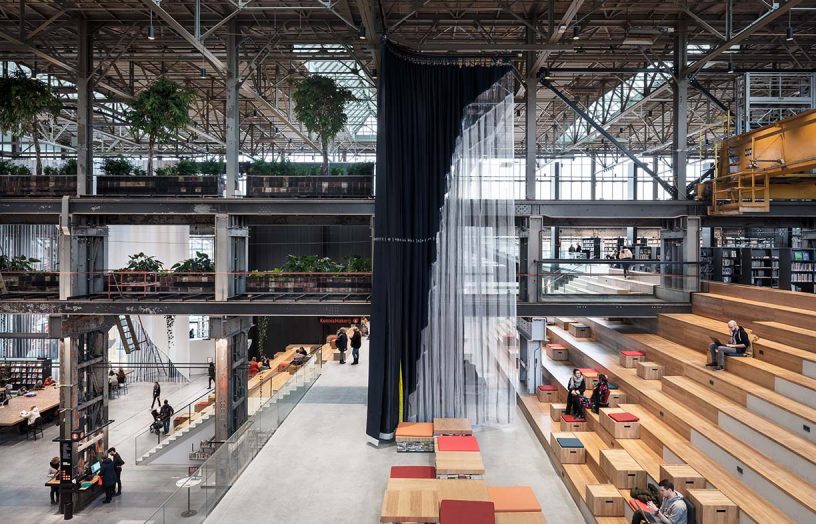 Architectural best practice values cultural history in modern design. Refurbishing a long-defunct locomotive depot, 2019 Building of the Year the LocHal Public Library has a giant footprint of 90 x 60 metres and a height of 15 metres, separated into multifunctional zones by adjustable curtains. Design by Civic Architects, Braaksma & Roos and Inside Outside. Second image: Stijn Bollaert

Sydney’s inner west has also recently welcomed a cherished public-building-turned-library. The heritage-listed former Marrickville hospital building was built in 1899 and remained unused after closing in 1990. The building was given new life, refurbished by architects BVN to accommodate a mixed-use library with a garden, offices, meeting space and a pavilion for events. The space is named after Indigenous woman Patyegarang, a guide and teacher of Aboriginal culture to early European settlers in the area; the name means ‘grey kangaroo’ in a local Aboriginal language, referenced by a large kangaroo in the children’s garden.

Local artists are supported in the Artspace that features rotating commissioned public artworks, and cultural inclusion and understanding are promoted with a space dedicated to community languages. The pavilion, event space, auditorium and 1200 square metres of garden are adaptable multifunctional spaces that allow locals to gather and host free events, from Tai Chi to evening cinema. All this contributes to community wellbeing, learning and social connection.

The carbon footprint of the library’s construction was kept low with the careful selection of materials including 27,000 recycled bricks and FSC-certified and recycled timber. In addition, 95 per cent of construction waste was diverted from landfill to reuse and recycling. The operational costs of the building are minimised though rainwater collection, natural ventilation and external shading for controlled solar gain. 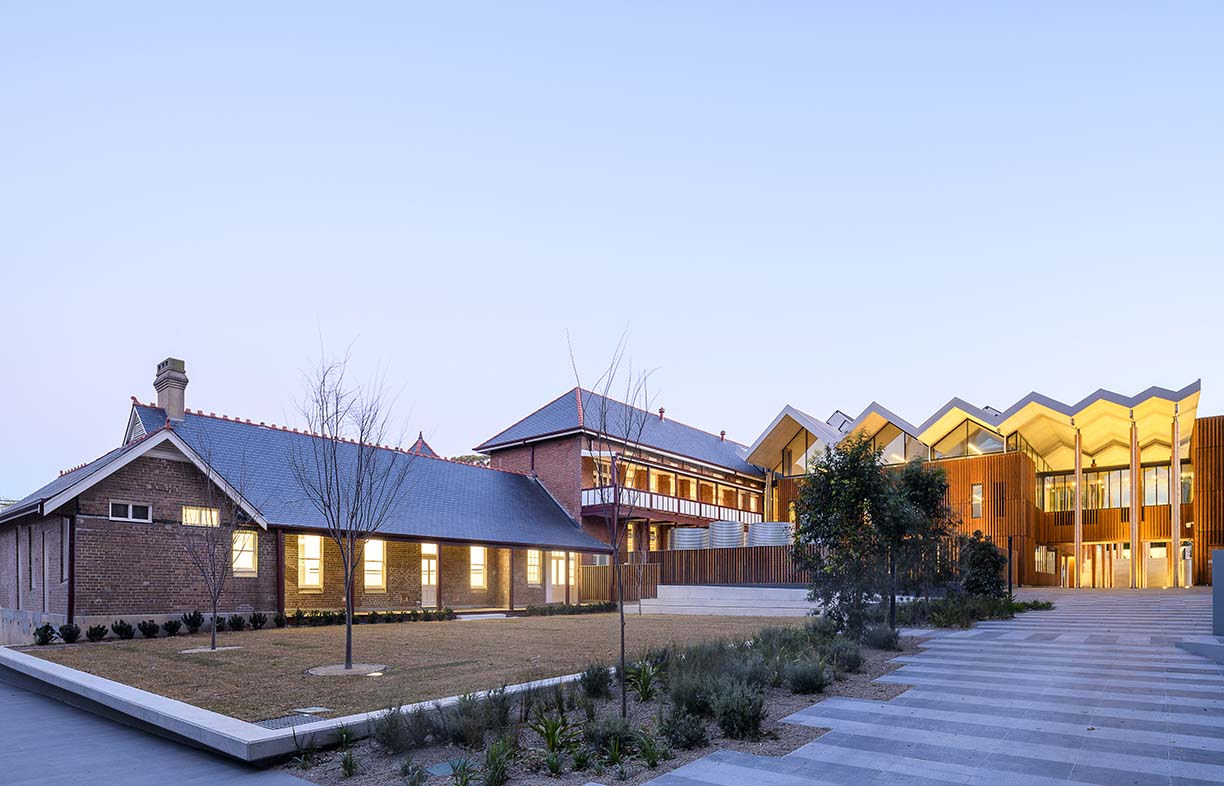 “Incorporating a building as historically rich as the old Marrickville Hospital and developing it into a piece of contemporary architecture to meet the needs of Marrickville’s diverse community was a truly rewarding project for us,” said architects BVN’s Project Director Brian Clohessy. Above image: Philip Noller, courtesy Inner West Library and History; below image: Brett Boardman 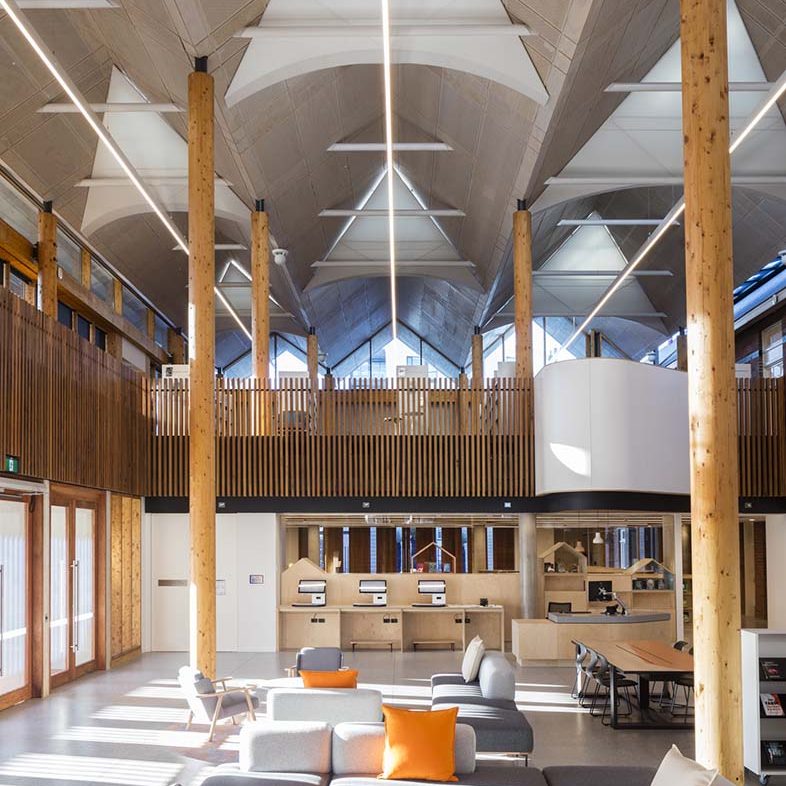 In 2013 the State Library Victoria (SLV) and the Public Libraries Victoria Network published a Strategic Framework, a design plan envisioning key changes to people’s lifestyles in Victoria to 2030 in order to better understand future wants and needs and how libraries can help meet them (bit.ly/VicLibrariesPDF). The plan is cleverly realised in the renewed SLV, which has recently opened the doors to thirteen renewed spaces after many months of refurbishing.

Principal architect Ruth Wilson of Architectus says that the transformation of the library has sustainability at its core. “We have given it new life with very delicate and precise design moves that are not extravagant or uneconomical. All the lighting is low energy, new materials have been chosen with low off-gassing, timber was sourced from responsible sources and the furniture is chosen for longevity,” she explains. “The air-handling system to The Ian Potter Queens Hall is of particular interest, designed to minimise energy consumption while increasing the overall comfort within the hall.”

The kaleidoscope of services offered has access for all people at its heart. For example, reflecting background research that showed that two-thirds of those under 30 have ambitions to work for themselves, StartSpace, located within the library’s Ideas Quarter, is a co-working space and resource that offers business tools, mentoring and guidance to foster and progress entrepreneurial culture.

“When the State Library was first opened it was described as a ‘free emporium of knowledge’, and I think that principle still underpins the best twenty-first century libraries,” says CEO Kate Torney. “Libraries will continue to be trusted places, where everyone is welcome and where people come with curious minds to explore, discover, debate, retreat, learn and imagine.” 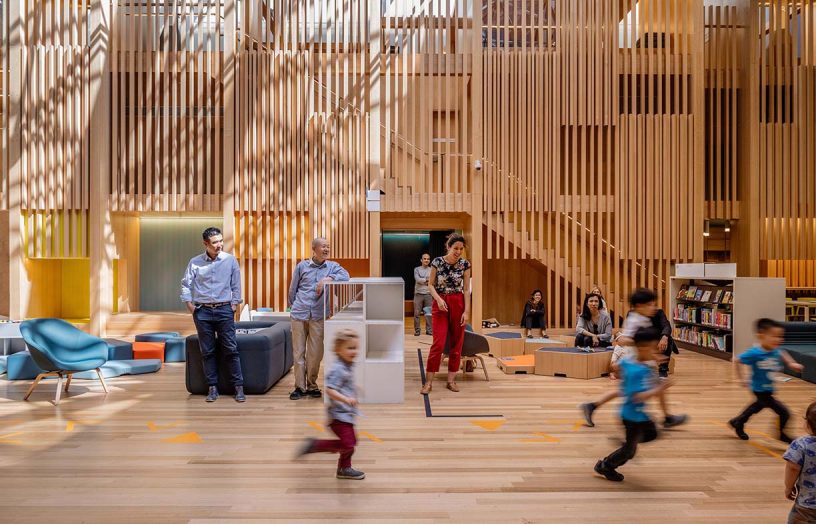 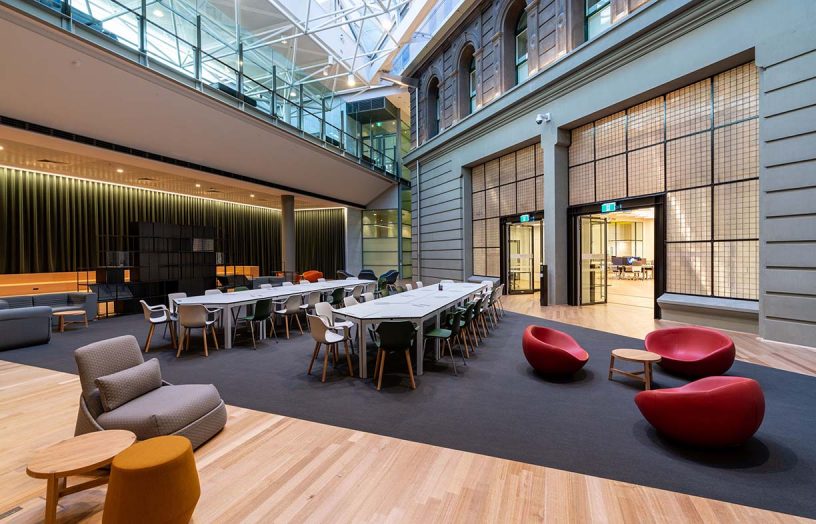 Library at the Dock

Not far away in Melbourne’s Docklands, the city’s newest public library is one of Australia’s most sustainable community buildings and an exemplar of sustainable design. A collaboration between Clare Design and Hayball, Library at the Dock was the first public building to achieve a 6-Star Green Star rating and also the first to be made primarily of cross laminated timber (CLT). The project contributed to kickstarting CLT production in Australia, and the five new CLT production facilities we now have. External cladding is reclaimed ironbark and tallowwood timber.

The building’s passive design promotes natural ventilation and daylight, which means reduced energy consumption. 85 kilowatts of solar generation takes care of 30 per cent of the building’s electricity requirements and a 55,000-litre tank in nearby Victoria Green park collects rainwater from the roof for reuse in the building. 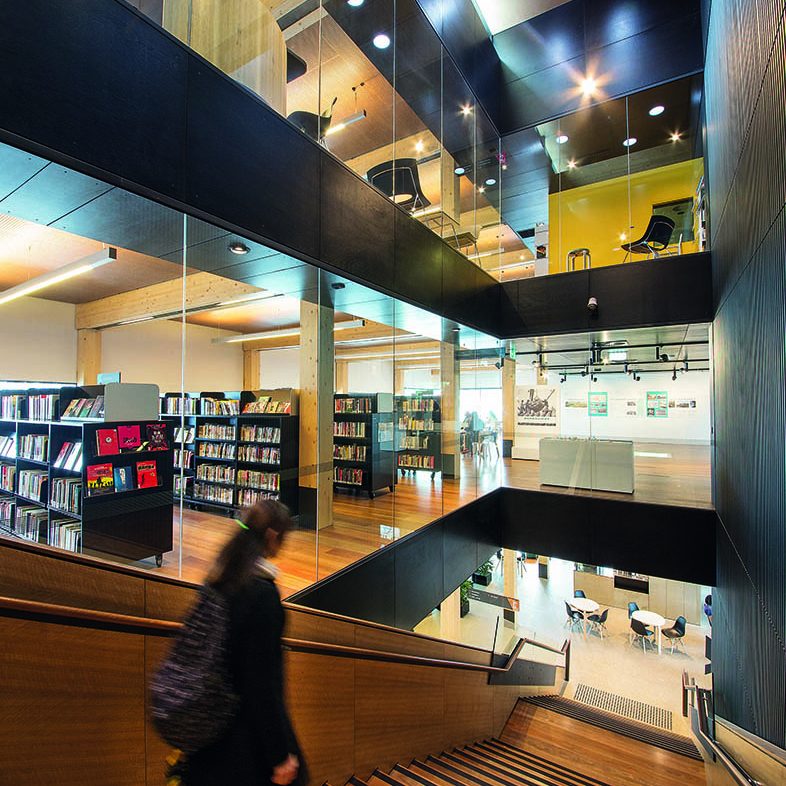 In Cooroy on Queensland’s Sunshine Coast, Brewster Hjorth Architects created a library purpose-built for the subtropical climate that provides a cool shelter and a link between the old Butter Factory art gallery, the main street and the Mill Place parklands.

Designed as two semi-underground pavilions, the building is nestled into the steep slope of the site. It makes use of the stable ground temperature for internal thermal comfort, and features a green roof for extra insulation. Taking cues from typical ‘Queenslander’ homes, a deep verandah with shade screens protects the north and west facades from the hot sun and provides a covered pedestrian walkway. Operable louvres and an internal courtyard provide for cross ventilation, supported by a ground-source ventilation system providing air pre-cooled by passing through two large underground concrete pipes.

During heatwave conditions or fires this centrally located, climate-resilient space could serve as a refuge for vulnerable locals. 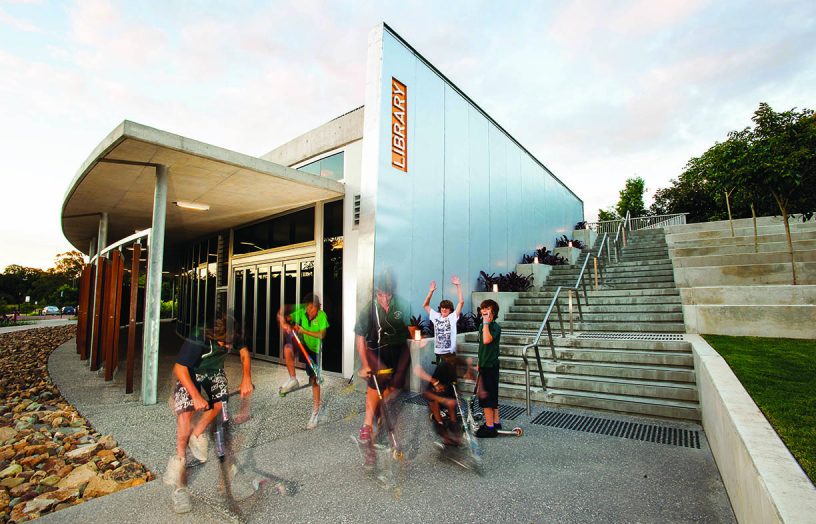 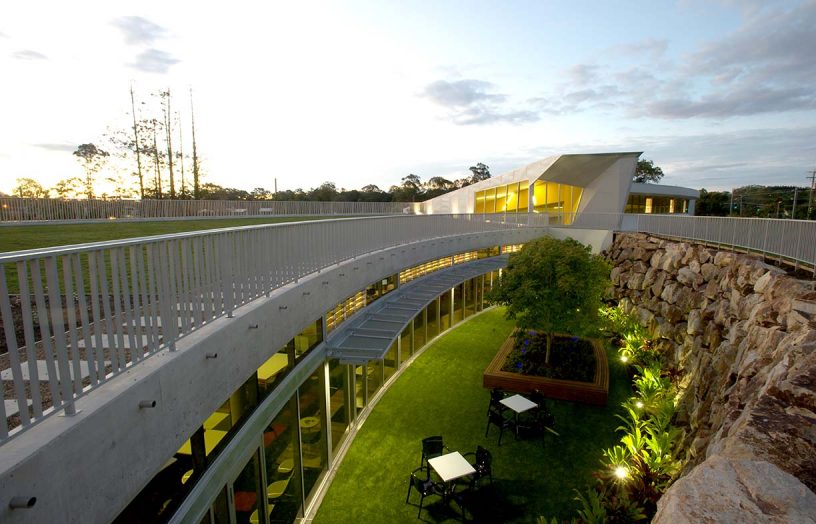