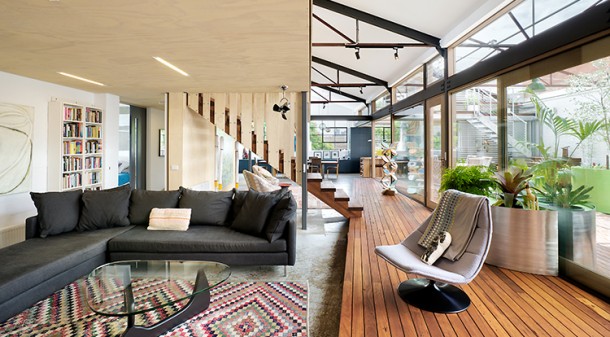 Stairs to the roof deck also provide access to the new ‘pod’ bedrooms suspended above the living area. The inside-outside deck makes a visual connection and softens the industrial interior. 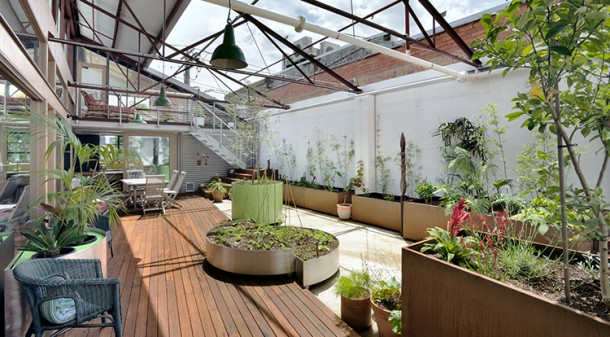 One-third of the original sawtooth factory roof was removed to allow for a protected courtyard and a productive garden. Planter boxes on wheels enable the plants to be moved to chase the sun as it moves across the sky throughout the year. 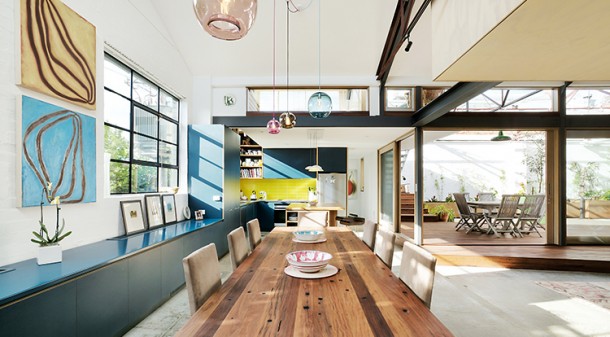 Retaining the industrial character was important to the owners, but so was converting the uninsulated warehouse into a comfortable, 6 Star home. They achieved both by upgrading all windows, insulating the walls and ceiling, and utilising the thermal mass in the concrete floors. 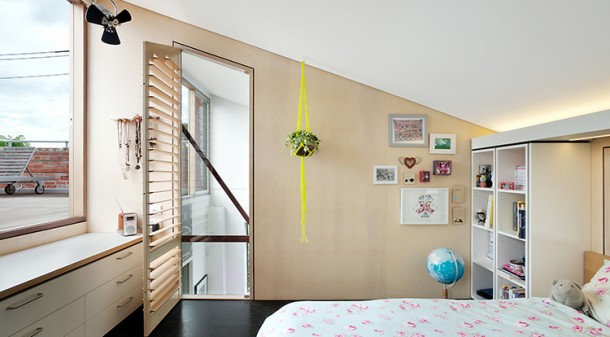 Windows looking across the roof deck and into the void above the living space help make this compact bedroom feel spacious. New FSC-certified plywood with a timber finish complements the recycled materials used for the majority of the renovation. 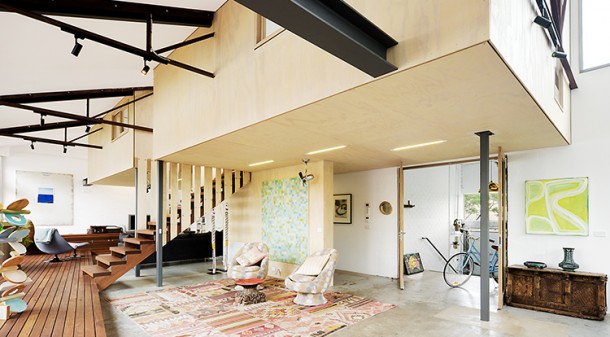 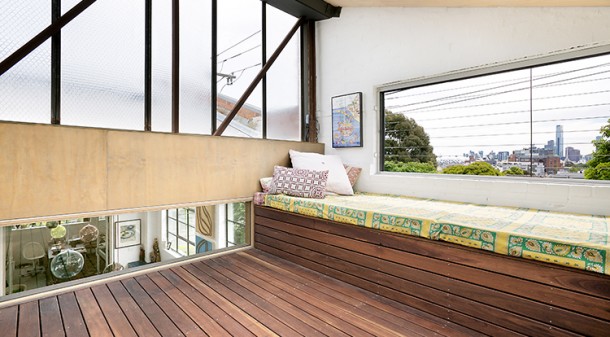 The character of the original factory was honoured wherever possible, such as retaining the glazing in the sawtooth roof to bring light to the ‘wintergarden’, which sits atop the laundry and provides city views. 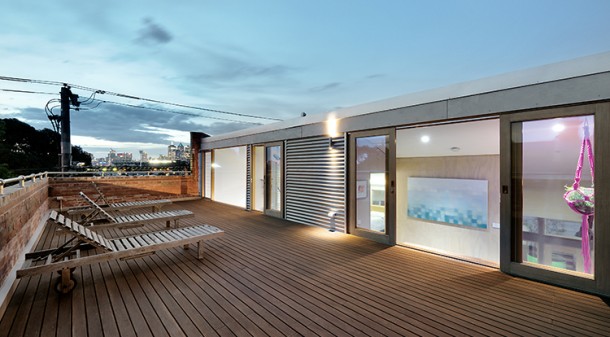 After a long and industrious life, a Richmond warehouse is lovingly converted into a thermally comfortable home and extensive courtyard garden.

From the mid-19th century Richmond was a manufacturing heartland with Bryant and May (Redheads matches), men’s shirt manufacturer Pelaco, and Wertheim Pianos all calling the suburb home. But with Melbourne’s inner suburb gentrification, over the past three decades Richmond has turned into a prized mix of converted warehouses and Victorian-era homes. Of Pelaco’s twin factories on Richmond Hill, the taller factory is now apartments; its smaller sibling has housed a gallery since 1980.

When the gallery closed, owners Guy and partner Kim decided to convert it into their home. Exposed steel trusses, raw concrete floors and a striking sawtooth ceiling typical to these gritty industrial warehouses lent this building ample potential. Sieve-like windows and walls and spent drainage systems made realising the challenge all the harder. They wanted to redress its shortcomings to make it habitable and thermally comfortable, to keep the beautiful feel and light of the space, and to adapt it to the requirements of two living-at-home daughters.

After meeting a number of architects, it was Zen Architects’ approach that appealed most. Guy had spent a lot of time in the space with his mother, and then when it had become his own gallery. “Other architects saw the site as a clean slate, but Ric Zen came back with an almost ‘what’s the least we can do’ approach because he could see that we really had an affection for the place.”

Ric describes his approach as a desire to “do less, but do it better”. Together with the clients they pared down the brief requirements. Reducing scope reduces budget but it also aligns with Zen’s design philosophy of achieving more with less. Slashing a planned off-street carpark, for example, saved costs and also preserved the integrity of the corner industrial facade and enabled so much more to be realised for the interior. “Don’t be afraid to let go of the need to keep everything,” says Ric.

The design response included three key interventions. First, the team fixed the poor orientation of the building. In a somewhat unconventional response for architects who deal in built form, Zen and his team carved out 150m2 – about a third of the total ground floor space – for landscape. Drawing northern light into the building envelope, the gorgeous landscaped courtyard is the hero of the project. Overflowing with greenery – stands of bamboo, moveable vegetable and herb planters to chase the sun – and dotted with sculptures, the courtyard joins indoors with outdoors through full height glazed slider doors. Sun sinks into the concrete slab, heating the home through winter. “Even in winter when it’s sunny we can sit outside because it’s sheltered,” explains Kim. “In summer, we just put up an umbrella.”

To Ric, this courtyard is one of the most successful features of the project and he recommends others consider this approach to achieve “a garden where you can put your feet on the ground”. But this can only happen, he cautions, if you allow enough space: “Don’t feel you have to fill everything in.”

The second intervention is the ply pod insertion along the length of the ceiling on the southern boundary. Upstairs here is access to the rooftop deck (with drop-dead city views), and two modestly sized bedrooms with raked ceilings. Frosted glazed walls divide bedroom and ensuite, enlarging the sense of space and introducing diffused, dappled light and permeability; boundaries blur not only through indoor and out but within the home. Operable louvre windows vent summer heat from the main volumes of the home; “just-to-be-certain” air-cons installed by the clients in the bedrooms are welcomed but have barely been used.

The third almost-invisible intervention took up a considerable part of the workload. Zen Architects stripped back the fabric of the building and gave the structure a thermal makeover. Leaking windows were replaced with double glazed replica units where necessary; walls were stripped and pumped with spray foam insulation; the sawtooth ceiling was replaced with bulk insulation (R6); and new structures were heavily insulated.

This took the building from negligible stars (read: insufferable through winter; intolerable through summer) to a 6.1 star energy rating – an impressive feat for an open plan repurposed warehouse structure.

When it came to improving the amenity of the home, understandably, the clients took some convincing that their example of these notoriously uncomfortable buildings could be anything but. “I remember Ric showing me predictions of the way the light was going to come in and heat this floor, and I thought: Pull the other one!” laughs Kim, pointing to the thermal mass (the concrete floor, bearing the bolt holes and scuffs from its long industrial life). “But it’s extraordinary the way the temperature is moderated in the home – it has never reached above 26 degrees Celsius.”

And alongside this new-found comfort is the design response that capitalises on and extends the building’s existing qualities. “We wanted to keep the general feel of the building, that light, sense of space, and those beautiful borrowed views,” explains Guy. “We just love the space: the inside-outside, and the maintenance of the integrity of the building. The old building – you’re constantly aware that you’re living in it.” 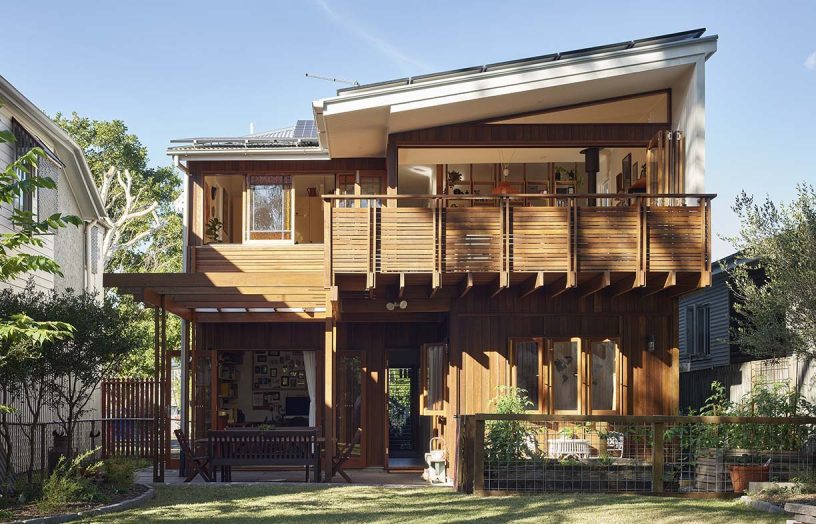