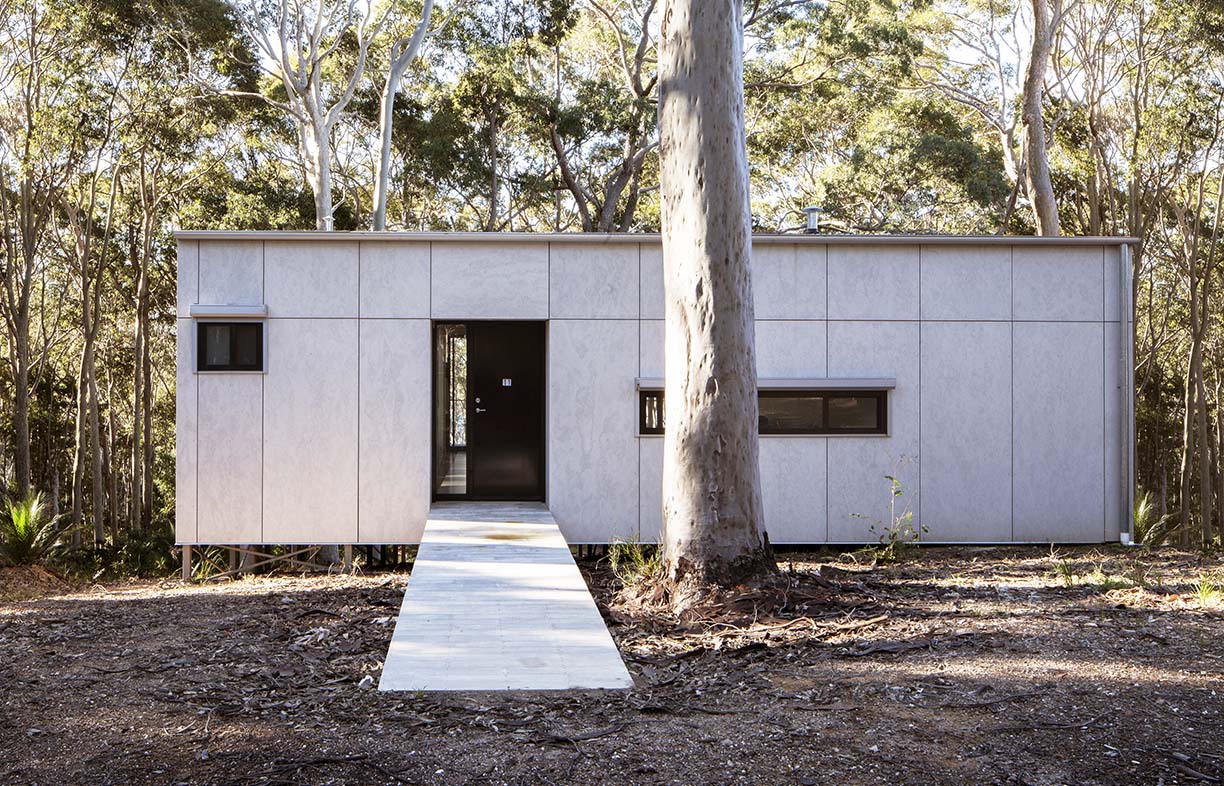 With a simple shape, clad in fibre cement and with a Hebel panel floor structure and metal roof, this home was designed to be energy efficient, low maintenance and suitable for its BAL-FZ site. A covered deck offers views to the north-east through the trees to the sea.

After a painstaking design process, this modest and energy-efficient modern beach shack survived a devastating bushfire on the New South Wales south coast.

For more than 40 years, a small block of land in the coastal village of Rosedale, NSW, had sat vacant. Owners Carol Behm and Ron Weir had other things to do, and never got around to developing the property. But when Ron retired, he decided it was finally time to put something on the tree-covered block.

The couple, who live in Canberra, made plans to build a retreat where they could spend several months each year. In 2014 Ron came into contact with Tom Caddaye, an architect who works in the region. Tom helped the couple develop a plan for a simple and efficient small home that he describes as “a contemporary version of a traditional Australian beach shack”.

In addition to their desire for minimalist design, the couple wanted to make sure the house would remain accessible as they age, so although it would be built on a slope, they requested the design avoid any steps. 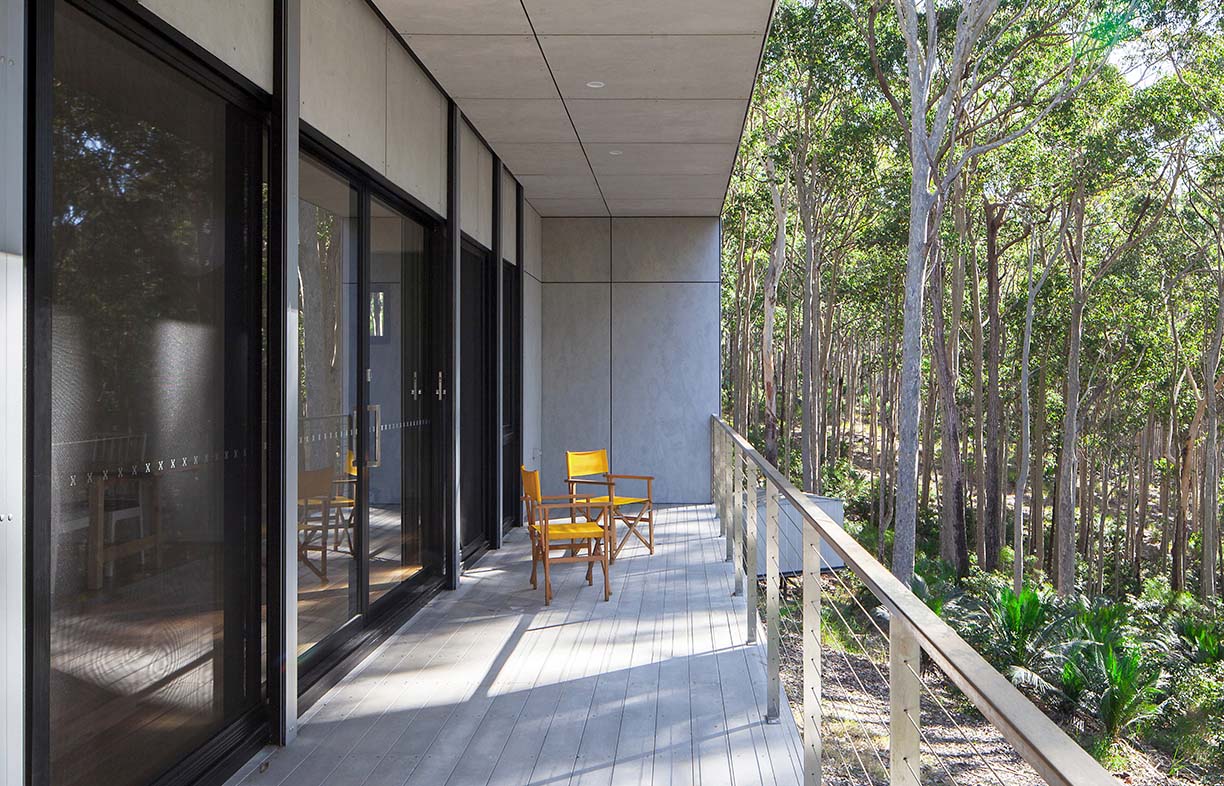 As the design was taking shape, Tom discovered that the site would be rated BAL-FZ (Flame Zone), the highest Bushfire Attack Level in the building standards aimed at making homes more fire-resilient. Luckily, the house’s pared-down design was already in line with what the stringent regulations required. “Every time you have a change in direction, or material, or an overhang, you have to throw lots of money at it to make sure it meets the BAL regulations,” Tom says. “The simpler the design could be, the better.”

The rating did have a profound impact on the materials Tom used for the house. To meet BAL-FZ requirements, no exterior timber or other flammable materials are allowed. Tom chose fibre cement for the exterior cladding: fire-resistant and also a reference to the classic fibro beach houses of the area. He partnered with builder TLC Constructions early in the process, and many decisions about detailing were made collaboratively. It was the builder who recommended using Hebel panels for the floor structure to enable the elevated timber floor, rather than cladding the underside of the floor structure with an extra fire-resilient material.

Windows were the most challenging and expensive part of the build. Tom ended up getting a pass from the Rural Fire Service to use windows and roll-down shutters both rated for BAL-40, since no similar BAL-FZ rated shutters were on the market at the time. This is no longer true, and Tom says exceptions like these are not allowed today.

The result of this careful planning – the house took nearly four years from the start of the design process to completion – is a simple and functional house, with a striking view of the ocean through the trees. Two modest bedrooms with ensuite bathrooms flank the central space, which has large windows and a deck to the north-east to take full advantage of the views and provide a sunny sitting spot and passive solar gain in winter.

“I certainly was very pleased with the design because we were able to have some of the things we really wanted, like timber floors, high ceilings, and a northern aspect,” Ron says.

Ron and Carol had barely begun to enjoy their new retreat when in January this year, amid the horrific bushfires that destroyed large areas of the country, the Currowan fire swept through Rosedale, burning down nearly every other home on the street.

Safely in Canberra, the couple believed that their house had been a victim of the fire as well. But then they caught a glimpse of it on a television story about the fires. Tom happened to be in the area when the fires struck, and was able to visit the house the very next day. Incredibly, he found that though the house had suffered some minor external damage including melted pipes and patches of scorched cladding, the structure was intact and the interiors were untouched. 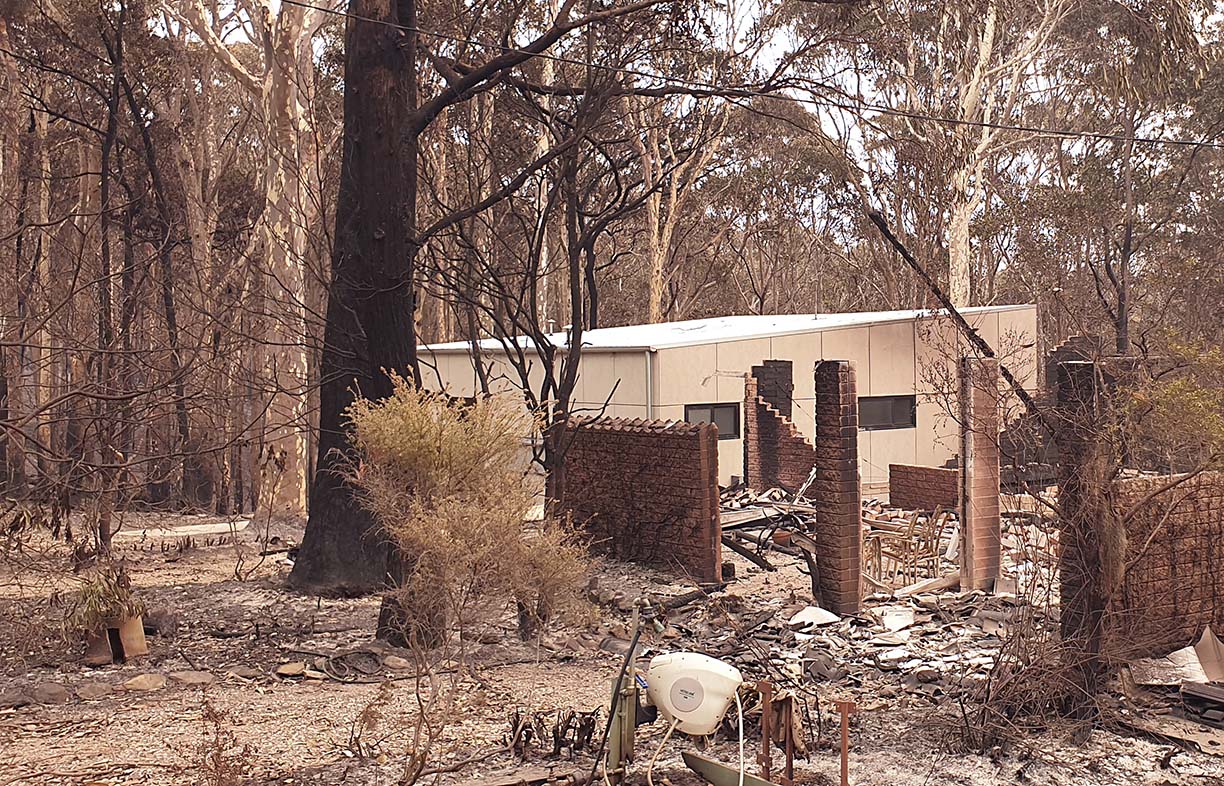 When the Currowan fire swept through Rosedale in January this year, Carol and Ron's house survived while neighbouring houses did not – a testament to the careful design. Image: Tom Caddaye

“I was surprised that the house survived,” Tom says. “We’d spent extra time and money complying with the BAL requirements, but I didn’t know if that would stop it burning down. I was quite impressed with the performance of the Australian standard.”

He recalls a mix of emotions while visiting the area after the fire. “It was very hard to look at that street; even though this and one other house were still standing, all the other houses had gone and the bush didn’t look like it could ever come back.”

“It was like the apocalypse,” Carol agrees. “But when we opened the door and went inside our house it was as if nothing had ever happened. Our house was perfect.”

The fact that the home got away without any smoke damage can probably be attributed to the strict BAL-FZ sealing requirements, which allow no more than a three-millimetre gap in any external area of the house, including doors and window shutters. Carol and Ron had also complied with advice to close their shutters when they left the property, preventing embers or flames from reaching the windows. “That was absolutely essential,” Tom says. “All the other measures such as fire-resistant materials in the floor, walls and roof would be useless without the shutters, because windows are the weakest point of a house.” 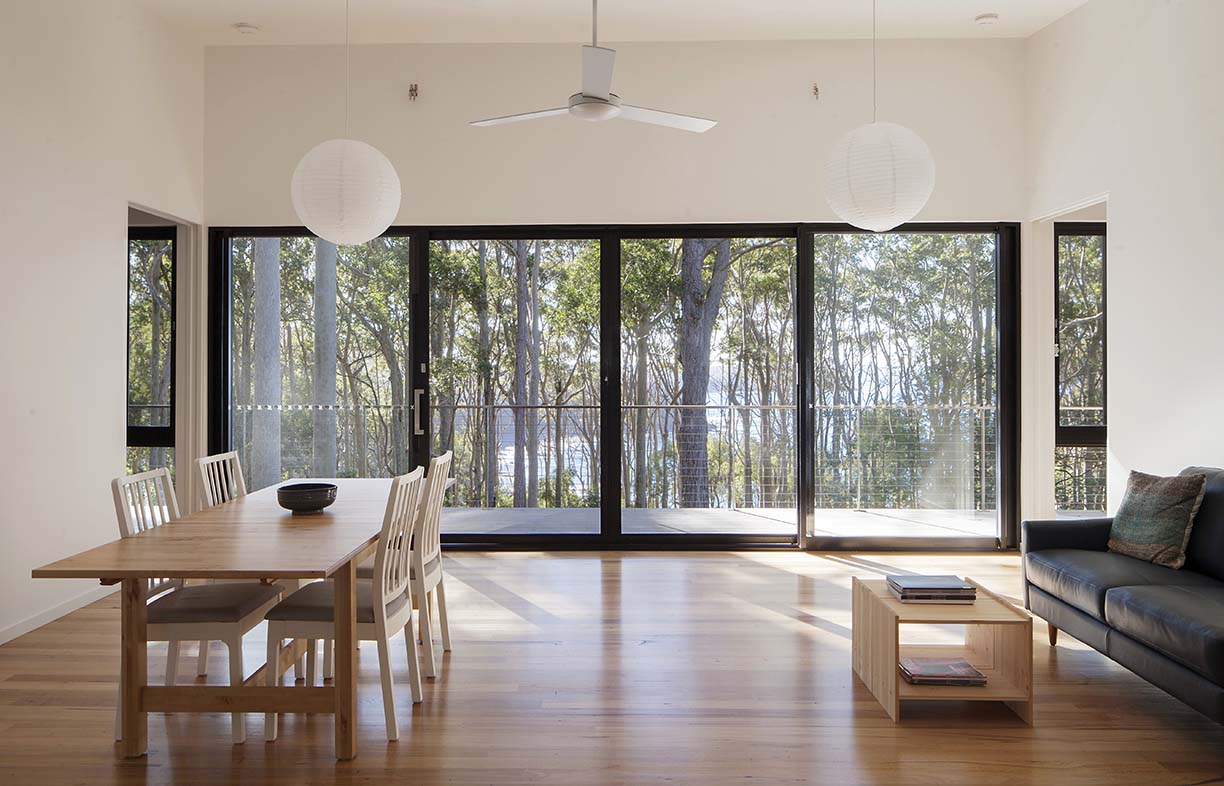 It will be quite a while before Ron and Carol can begin enjoying their house again, as they are just now beginning to hear back from their insurance company on quotes for the needed repairs. But they appreciate how lucky they have been. “In the end, replacing your PVC pipes and roller shutters is better than having to build a new house,” Tom points out.

Tom is now working on designing another home just down the street, which will replace a house lost in the fire. “I am looking to Carol and Ron’s house as an example,” he says. “I’m just going to stick to the standard rigidly.”