Transformation on a budget 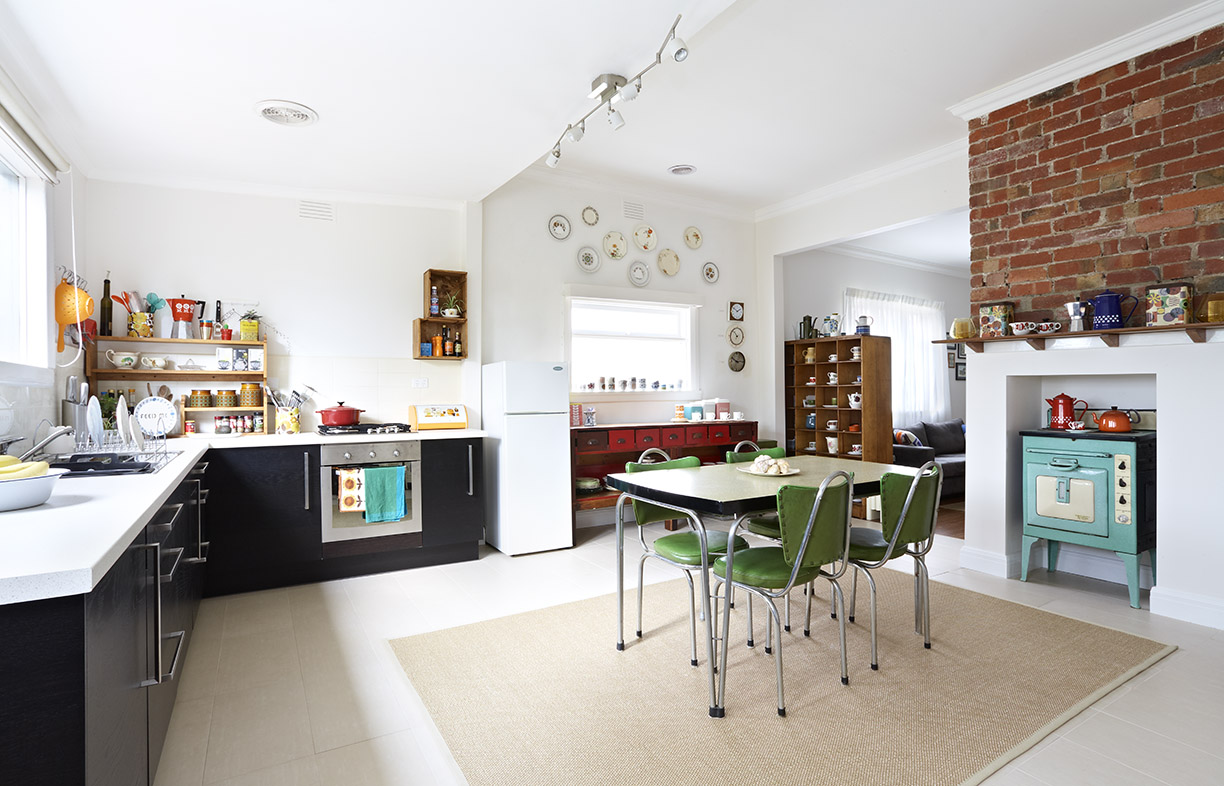 Lucy chose black cabinets for longevity and to match her eclectic furnishings. Rather than installing overhead cupboards she bought a second-hand hanging shelf unit which she turned into kitchen shelves to hold tea, coffee, oil, jars and spices.

A routine restumping transforms an old weatherboard in inner-suburban Melbourne into a charming home.

Transforming a ramshackle home into a delightful, inviting haven on a budget of under $50,000 takes talent, but that is exactly what Lucy and Darren have in spades. Lucy’s flair as a ceramics designer and illustrator obviously inspires the aesthetic of the home, but both members of the partnership worked hard at the renovation. Darren took time out from his Masters in Renewable Energy to turn his hand to carpentry, painting and more – much more than they initially expected!

Lucy and Darren bought their home four years ago knowing that it needed some surgery. The front corner of the timber house leaned right down to the ground, and obviously needed restumping, but the rest of the house seemed fairly solid.

The couple had lived in the house for a year before getting started on the restumping. Then, a few days after the stumpers started, Lucy received a phone call at work: “We think you should come and look at this”. When she returned home she was told that the straightforward restumping needed on the front corner should involve extensive work on the whole house. The stumpers also suggested the lean-to kitchen at the back be demolished, being an add-on structure clumsily connected to the home’s original foundations. Signing off on the extra restumping was a must, but Lucy and Darren decided to keep the lean-to.

When the restumping was finished the couple were left with a house needing replastering, rewiring, replacement of the original floorboards damaged during the restumping process, and repainting. Their simple restumping had turned into an epic undertaking which would have them renovating on the weekends over a year-long period. 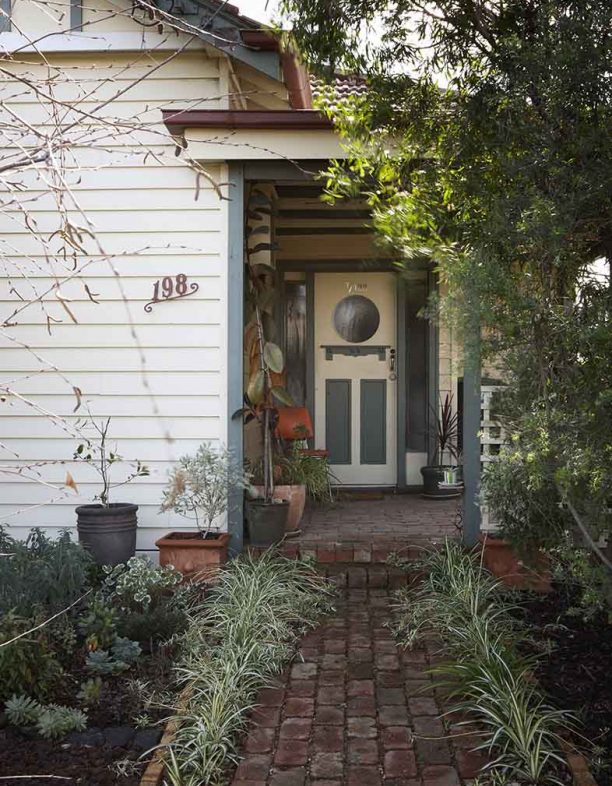 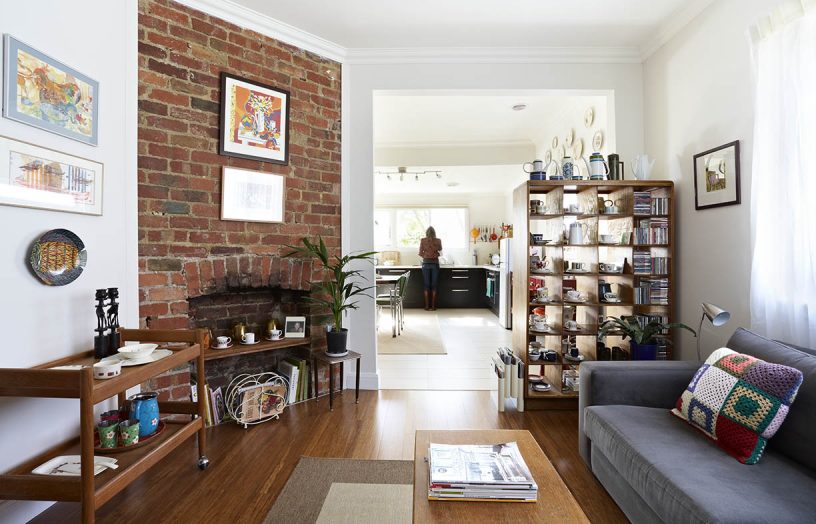 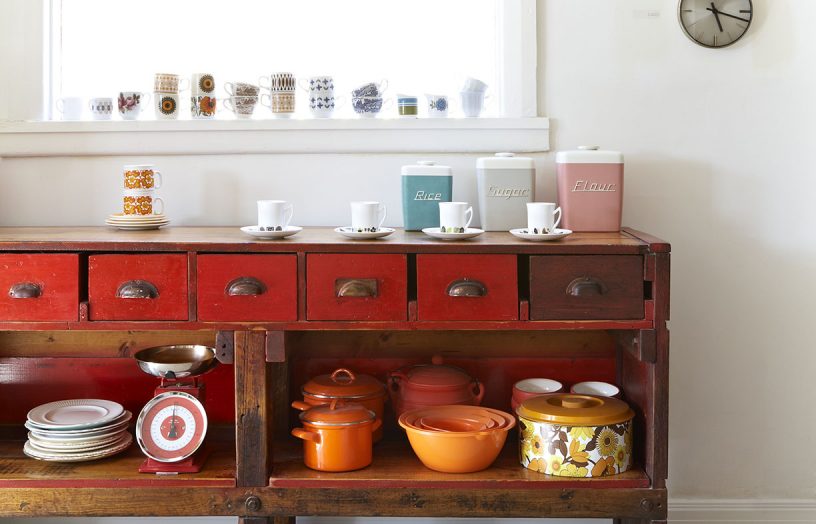 (Left) Bricks dug up from the garden were reused to extend the rear courtyard and to create a neat path to the front door. Repaired and repainted weatherboards now shelter 2.5R wall insulation, improving the acoustic and thermal performance of the house. (Right top) Lucy and Darren bought the shelving unit from Lair in Lygon St, East Brunswick, for $600. Here it works as a display cabinet for Lucy’s treasures and as an informal room partition.

Only two rooms remained untouched throughout the renovations – the bathroom and bedroom – but the couple decided to stay living in the house, tiptoeing along the floor joists and rugging up against the winter cold in the unplastered rooms. Most of their furniture was in storage for the entire year.

The silver lining with the restumping disaster was that it allowed them to comprehensively insulate. With the original plaster taken off the walls they could place thick batts within the wall framing. They also put in roof insulation. They chose a thicker-than-normal plasterboard for the underlining of the external timber cladding, which provides an added insulative layer. With the home stripped back to bare bones they could seal gaps, replace old timber veneer cladding and give the house a general health check.

“Lots of the floorboards were sadly ruined with the stumping, with boards split lengthways as well as being crudely cut to access the stumps. We had no idea what to do about the floor,” says Lucy. “It would have been good to have had the experience or knowledge to explore other ways of keeping the original boards, and perhaps replacing the ruined boards with recycled boards. The research we did however seemed to suggest that second-hand karri pine boards are hard to find because they split the length of the boards when being removed, and any good condition ones are therefore expensive – but it probably would have been worth it to keep the original floor.” Instead they opted for bamboo flooring laid over the original boards. “As much as we love the bamboo flooring and are really glad we opted for a more sustainable floor rather than new timber boards or laminate flooring, the original karri pine boards were lovely and it would have been nice to have kept these and not put a new floor in at all.”

They replaced the chipboard doors throughout the house with second-hand hardwood doors, and they were able to reuse the door handles on the new doors. Bricks dug up in the front yard were reused to extend the rear courtyard. More bricks were found when they uncovered the original fireplace, as well as a lovely mantelpiece which they reused over the kitchen fireplace. 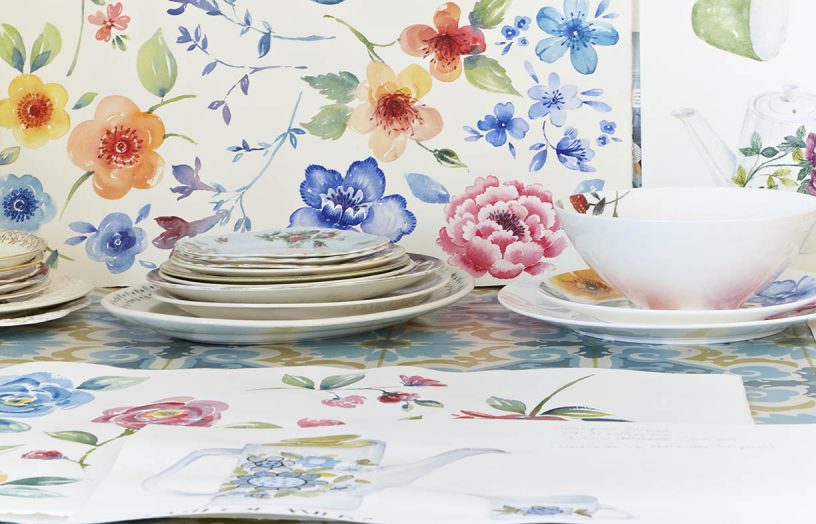 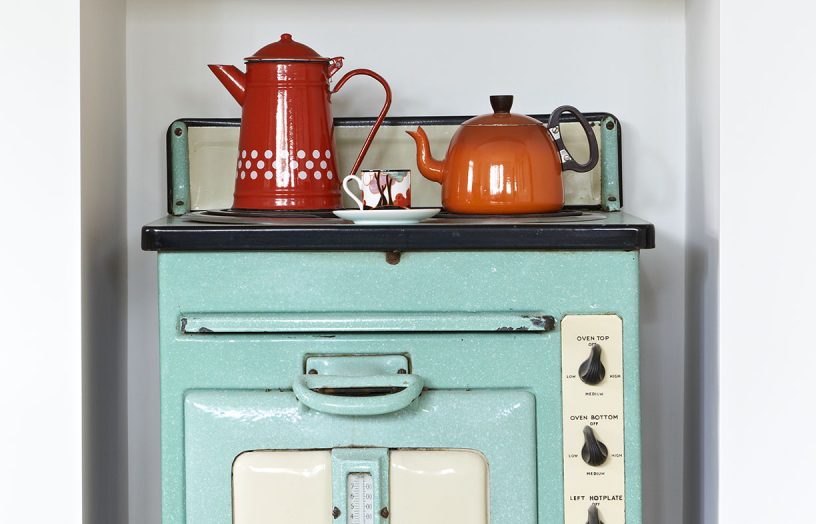 At a critical point in the renovation, Lucy and Darren’s existing gas hot water system packed up. They had no kitchen, no oven (they were cooking on a single burner camping stove), and then no hot water in the middle of winter. They wanted to install a solar hot water system through their local council solar bulk buy scheme, but the earliest they could get even a quote involved at least a four week waiting period. “It sadly meant we couldn’t get a solar system which was very disappointing,” says Lucy. “Anyone with a hot water system who wants to upgrade to solar should plan ahead and upgrade before their system breaks. Once it breaks your options are limited!”

The transformation of the house as an exercise in making the most of what you’ve got carried through to the home’s extensive furnishing with retro and vintage finds. According to Lucy, “the majority of the furniture in the house is re-used and recycled from local charity shops, tip shops and markets. I think this is one of the easiest ways to recycle – and often the older pieces of furniture are far nicer, better built and more robust than newer pieces.” Her homewares are an eclectic mix of beautifully coloured and patterned found treasures, providing inspiration for her artwork and keeping her home a model of modest sustainable living. 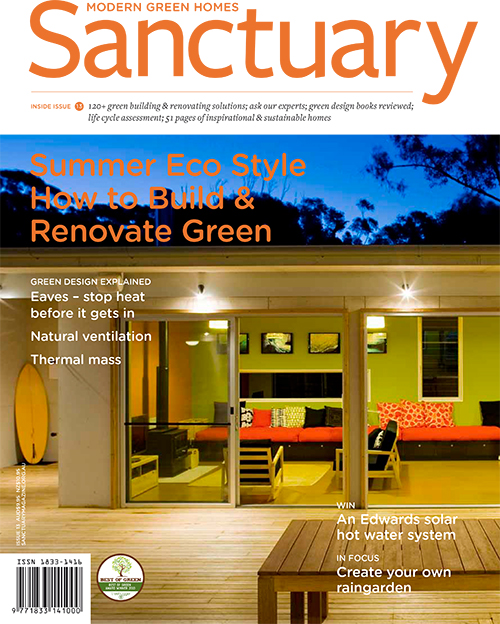