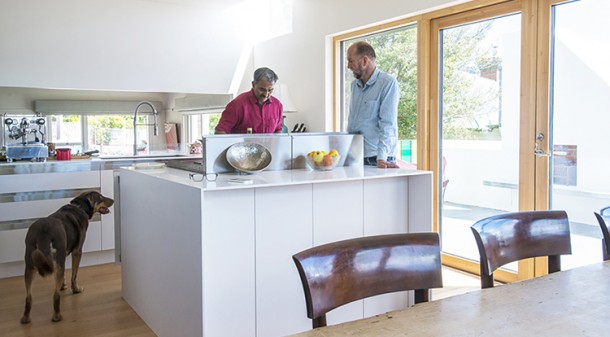 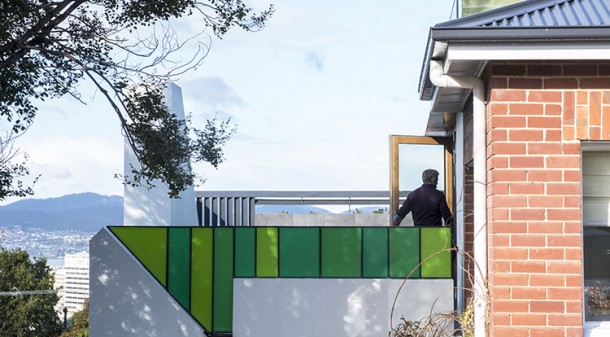 The location of the terrace above the garage makes use of what is oft-wasted space; the playful use of coloured glass and clever screening protects neighbour privacy; the clear distinction between old and new protects and enhances the character of the neighbourhood. 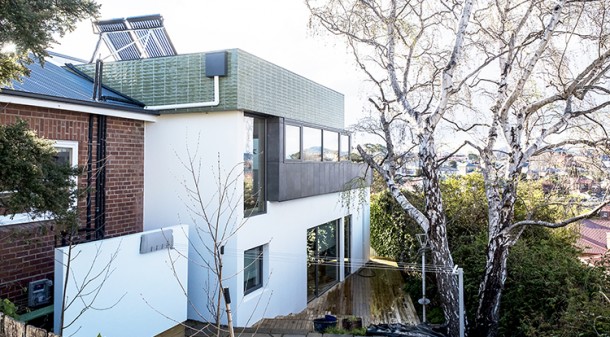 The two-level addition steps down the yard, which makes it inconspicuous from the street. The use of rendered ClinkaBLOK insulated masonry complements the original 1930s red brick. 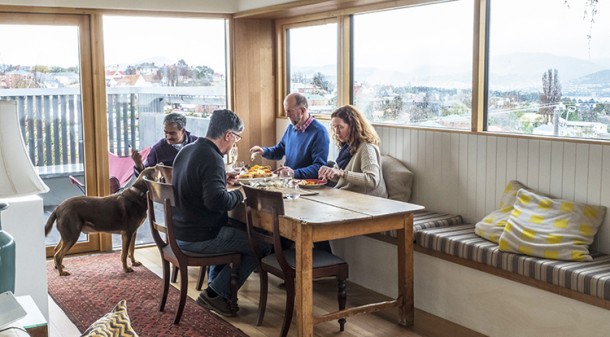 Now light, bright and fully functional, Geoff’s house shows that the interwar-era bungalows need not be thought of as an unexciting housing style, but one which has great potential to be improved to last another century. 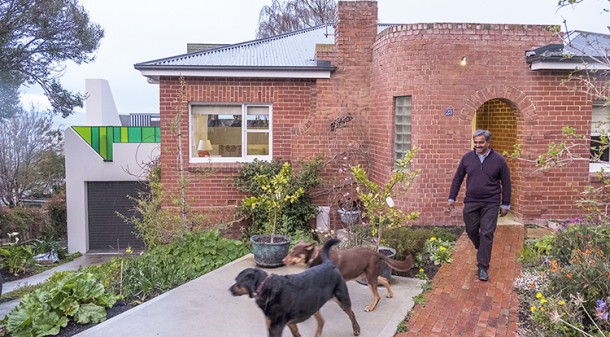 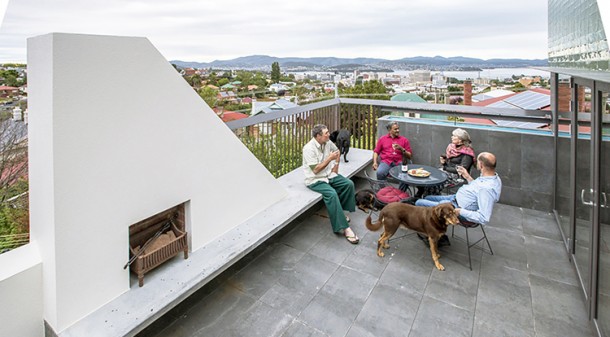 In line with the high-performance addition, the whole house received a thermal upgrade including carefully sized triple-glazed windows and a north-facing terrace connected to the kitchen. 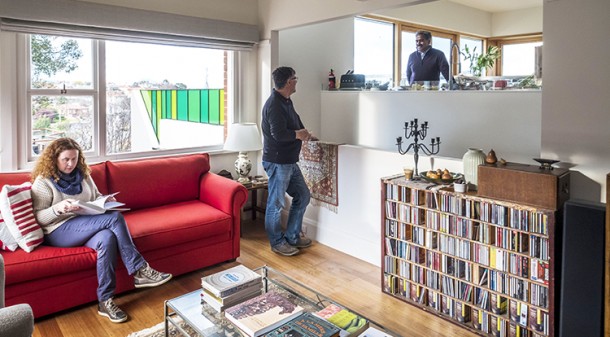 The original house turned its back on incredible views of Hobart, which is not uncommon for this era of housing. The new kitchen and original formal lounge ‘talk to’ each other across the stairwell, which also marks the transition between the old and the new split-level addition.
< 1 / 7 >

A freezing, interwar-era bungalow is reconfigured to improve liveability and take advantage of dress circle views across Hobart.

As you enter the curved brick front porch of Geoff’s 1937 home in West Hobart, you walk across a terrazzo version of the same lion that appears on the Tasmanian flag. Despite the obvious patriotism of the original owners however, the house – like many of its era – didn’t take advantage of the city’s best aspects, the sunshine and views available from the site’s north-east.

Largely unaltered since construction and prior to its reimagining, the house was a typical small interwar bungalow. Built in large numbers across Hobart, these homes are typically devoid of the decorative adornments of earlier Australian residential styles. Instead they are utilitarian with an almost fortress-like solidity.

The owners, who moved from Melbourne, were attracted to Tasmania by “the cooler climate, the plants you can grow and the period architecture”. They learnt an early lesson about the importance of solar orientation in Tasmania – their first house in the historic inner suburb of South Hobart was in the shadow of Mt Wellington on a south-facing slope.

While they were initially chasing a “sandstone and preferably Georgian” home, they were attracted to this modest maroon brick home because of the “potential to re-orientate the house to the north-east and the views”. “Looking out the original back bedroom window, I was seduced by the views of the bridge,” says Geoff.

In another typically Tasmanian twist, Geoff tells how they found their architect, Ryan Strating of Core Collective, through a word of mouth trail. “Lynne, the real estate agent, knew the vet across the road, who knew Ben the furniture maker, and Ben was a friend of Ryan.”

Core Collective’s ethos and focus on sustainable architecture and energy efficiency appealed to the owners. Having lived in Canada before, they were inspired by the thermal properties of housing there and keen to replicate it in their new home.

The alterations Ryan and his colleague, Chris Clinton, conceived in consultation with the owners are subtle in appearance, especially from the street, but have been hugely transformative in how the house is experienced and lived in.

In the original layout, the small kitchen sat tucked into the south-west corner of the house and one of the two bedrooms took the prime north-east facing orientation. Ryan’s solution was to remove that north-east facing quarter of the house and rebuild it as a two-storey box and to Northern European thermal standards. It houses a new kitchen, walk-in pantry and living area on the upper level. Because of the fall of the land, the two-storey addition acts as a split level to the original house, rather than a genuine second storey. It lifts these living areas up enough to capture extra sunlight and create a commanding dress circle-like view of Hobart – the city and the harbour – but not so high that it would offend neighbours.

Connected to the kitchen/living level is a north-facing terrace, complete with open fireplace, a playful use of coloured glass and clever screening, which allows views and sunlight but protects the neighbour’s privacy. The terrace sits atop the new single-car garage, and creates an outside space connecting the house to the neighbourhood. The “box” is skirted on two sides by a hall and a cleverly conceived stairwell leading down to the garden-level main bedroom, walk-in robe and generous ensuite bathroom.

Apart from the addition of the lower level, the house is only marginally larger than it was originally, but its genius is in how the space is used and in the reversing of its orientation. “We didn’t want it to be huge. We had a lot of wasted space in our Melbourne home and were keen to avoid this,” says Geoff. “Ryan was very good with how he dealt with and managed the space.”

Outside, the differentiation between the original house and the new addition is clearly identifiable, but inside it is less distinct. One of the great triumphs of the design in tying the old to the new to create a coherent, almost singular, space lies in how the stairwell was creatively devised and realised. While a high, north-facing window brings light down the stairwell and deep into the house, it is the two large openings – along one wall of the original formal lounge and at the back of the new kitchen – that together allow the old and the new to speak to each other. The high stair void provides a buffer between the two rooms, but the openings integrate the lounge and the kitchen, allowing a connection to be maintained and conversations to continue.

In improving the house’s thermal properties, the renovation went well beyond re-orientating it to the north-east, however. Carefully considered choices and use of materials and innovative heating solutions have taken it to the next level. In something of a Northern Europe meets Tasmania equation, thermally efficient Clinka expanded clay masonry blocks were used to construct the addition. Danish triple-glazed windows allow the views to be drawn in while mitigating against the cold and heat.

Solar-backed hydronic heating was not only installed into the concrete slab of the main bedroom level of the addition, but was integrated into the walls and ceilings throughout the house. Both the original house and the extension were also heavily insulated and gaps in the original doors and windows sealed. As a result, the owners say that they only needed to use the hydronic wall heating three to four times during their first year.

What has been so successfully achieved in the reimagining of this modest 1930s house is that it not only brings it forward in terms of liveability, but demonstrates the potential for this era of Australian housing that is too often thought of as dour and unexciting. “They’re a real resource and to figure out ways to make them last another 100 years at peak performance is worthwhile, because from a sustainability point of view you’re not wasting all that hard work, materials and embodied energy in the existing building,” says Ryan.

The owners say the addition has been well received by neighbours and, being keen entertainers, quite a few of them have enjoyed a meal in the new addition and terrace. The terrazzo lion still greets guests as they arrive, just as it did when first built, but there’s just a little more puff in its chest as the little house now also draws in the best of Tasmania.