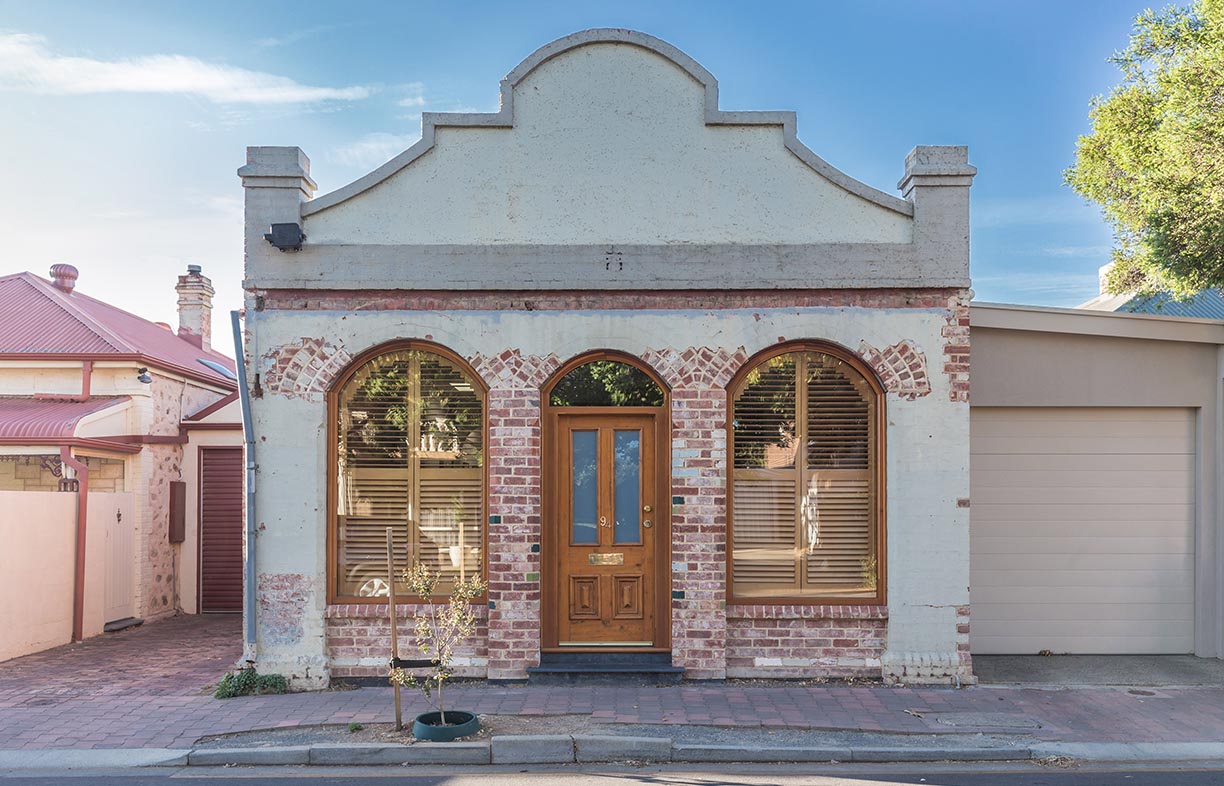 As part of this renovation project, the facade of the shop was restored to its original design, based on an old photo unearthed by the homeowners.

With determination and creative intervention, this heritage Adelaide shopfront and its poorly conceived 1970s extension were salvaged, restored and transformed into a light-filled, comfortable modern home.

Julian and Jenny Morison bought their 1880s heritage shopfront property in Adelaide’s leafy inner suburbs with an eye to moving closer to the city, to a house that would be easier to maintain than their former home and garden in the Adelaide Hills. “We knew our priorities and lifestyle choices would change as our children left home,” Jenny says.

‘Not for the faint-hearted’ was what the real estate ad warned, and it wasn’t wrong. The old shop with its 1970s two-storey extension was dark, cold and had salt damp problems. “I recall our building inspector saying, ‘What do you want me to tell you? It’s obvious you need to do something about the floors, walls and ceilings, and goodness knows what they are concealing’,” says Jenny. Still, the new owners saw that the property had great potential.

With a brief to restore the dilapidated shop and reimagine and integrate the double brick rear extension, retaining original features and materials where possible and improving energy efficiency and functionality, architect Julian Rutt knew he had a challenge ahead when the owners engaged him. “‘Wow, there’s going to be a lot to do here’ was my first thought. But I could see that there were a lot of possibilities. Often the more challenging projects are the ones that yield the most interesting and creative outcomes, and that’s what happened with this one.” 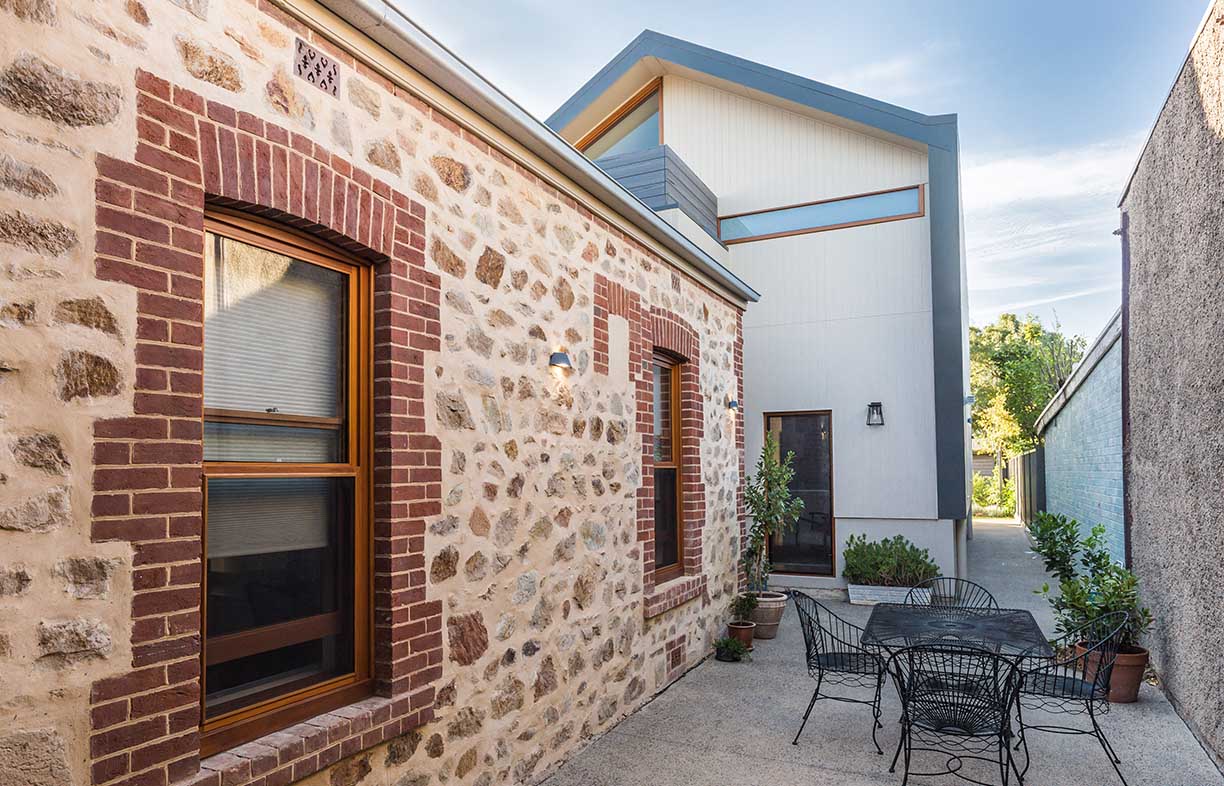 Both the 1880s and 1970s sections of the building were able to be retained, restored and upgraded, thanks to some clever design interventions and the determination of the homeowners and architect.

He found that while the structures were well-built and had no cracking, they were ageing and damaged. Sunken floorboards and salt damp-affected plaster would need to be rectified in the front building, and both buildings sorely needed reconfiguring to make the dwelling more functional. The extension had an awkward layout with very low ceilings, and although it had a proper stairwell, the upper level wasn’t much more than an attic. Natural light, solar access and thermal comfort were very poor.

A key guiding principle for the design was to retain and adapt the existing structure rather than knock it down and rebuild. “There’s a lot of embodied energy in the structure and the bricks,” says Julian. When they were removed, bricks, Baltic pine floorboards and doors were retained for reuse where possible. 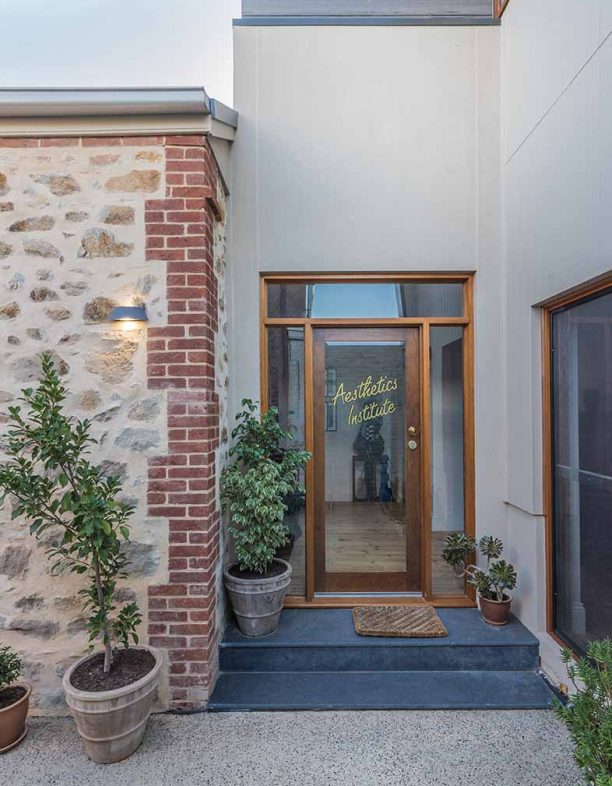 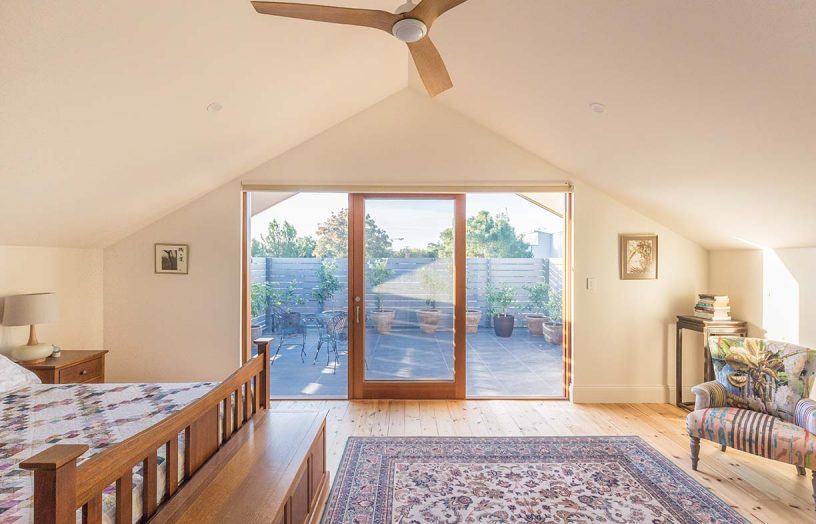 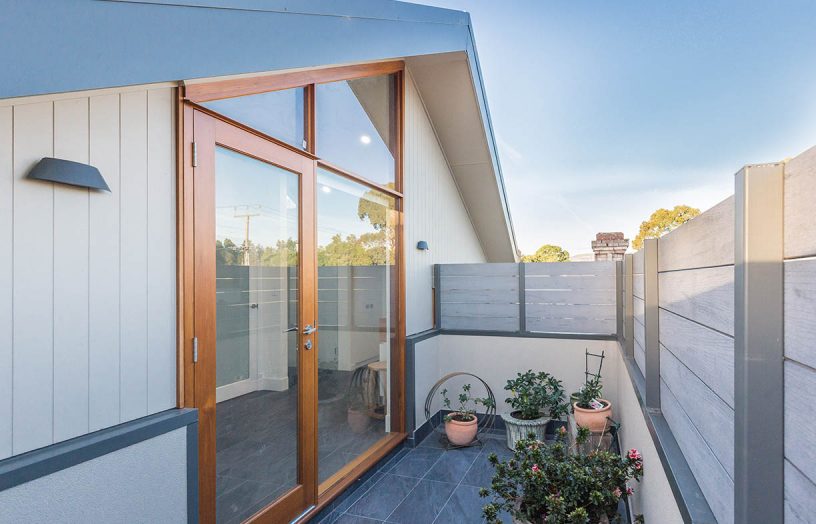 The link between the two sections of the building now functions as an inviting entry, and the poky, attic-like upper level in the rear section has been transformed. "It's now a spacious, light-filled retreat which opens onto a wide deck where we can see the sky and where we have potted fruit trees," says homeowner Jenny. The generous ensuite also opens onto a small rooftop deck.

Some of the features of past renovations – such as the odd level differences and steps – were stripped back, as well as the plasterwork masking some of the original late-nineteenth-century brick and stonework. The restoration work on the building’s facade was one of the more striking examples of this. “The whole front of the shop had been changed at some point,” says Julian. “The owners found a photograph of what it used to look like and decided they wanted to restore it, with big brick arches and a central door.” Windows that had been turned into doors in past renovations were also restored.

The orientation of the property also provided a challenge, having greatest exposure to the east and west, so the extension has been reconfigured on both levels to maximise the limited northern aspect to the rear. On the ground level, a larger lounge and dining space has been created by knocking out walls. The entire upper level was lifted and its ceiling height increased, creating more useable space both upstairs and down. Extensive glazing overlooking the backyard allows winter sun in and provides a stronger visual link to the outdoors. The upstairs level now houses a main bedroom retreat for the couple, with a large adjoining deck and shading to protect against the summer sun. An ensuite bathroom has its own small deck. 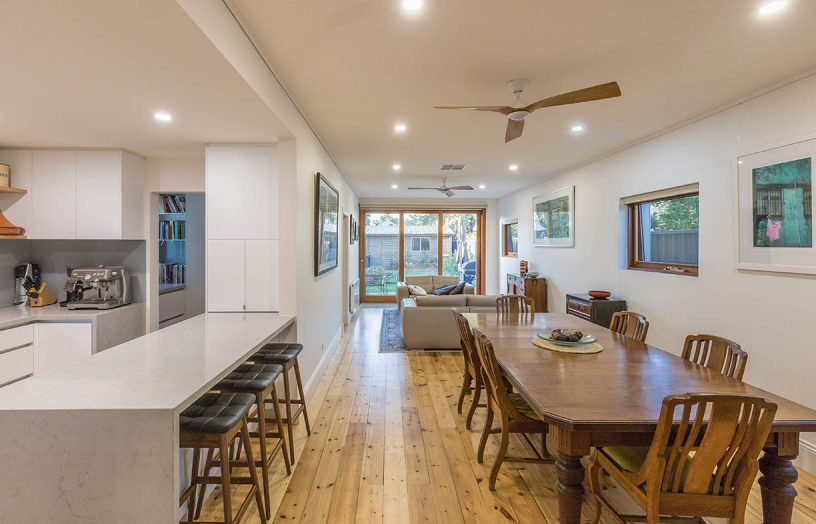 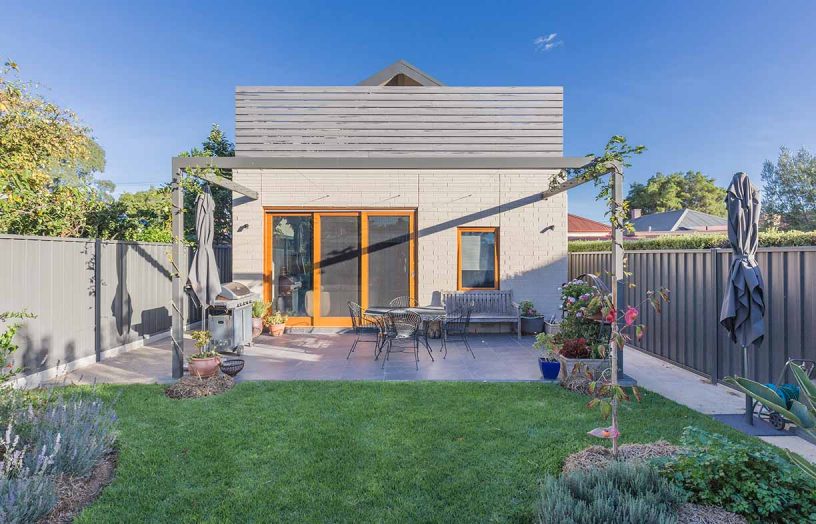 The upper level of the rear structure was raised to increase the ceiling height downstairs, and walls removed to open the living space up to northern light. Large sliding doors to the rear of the house connect the living space much better to the small north-facing back garden.

One of the major drawbacks of the extension was the lack of thermal comfort. To help solve this, a highly insulated ‘skin’ now envelops the roof and both sides. “This means that the house’s inhabitants experience less extreme fluctuations in temperature during the day and over seasons,” the architect explains. Admission of natural light into the older part of the house is also much improved, including the addition of skylights to illuminate one section built right on the boundary.

The comfort levels of the renovated house are a vast improvement on the cold, dark and damp of its earlier incarnation, and the project received an impressive 7.4-Star energy rating. The evaporative air conditioning is only required occasionally during periods of extreme heat, says Jenny. A neat feature that really reduces the need for air conditioning at night, the architect Julian explains, are the skylights in the upper level roof that function as thermal chimneys. By opening them at the end of the day, hot air that has accumulated during the day can be vented, drawing in cooler evening air from opened lower level windows. 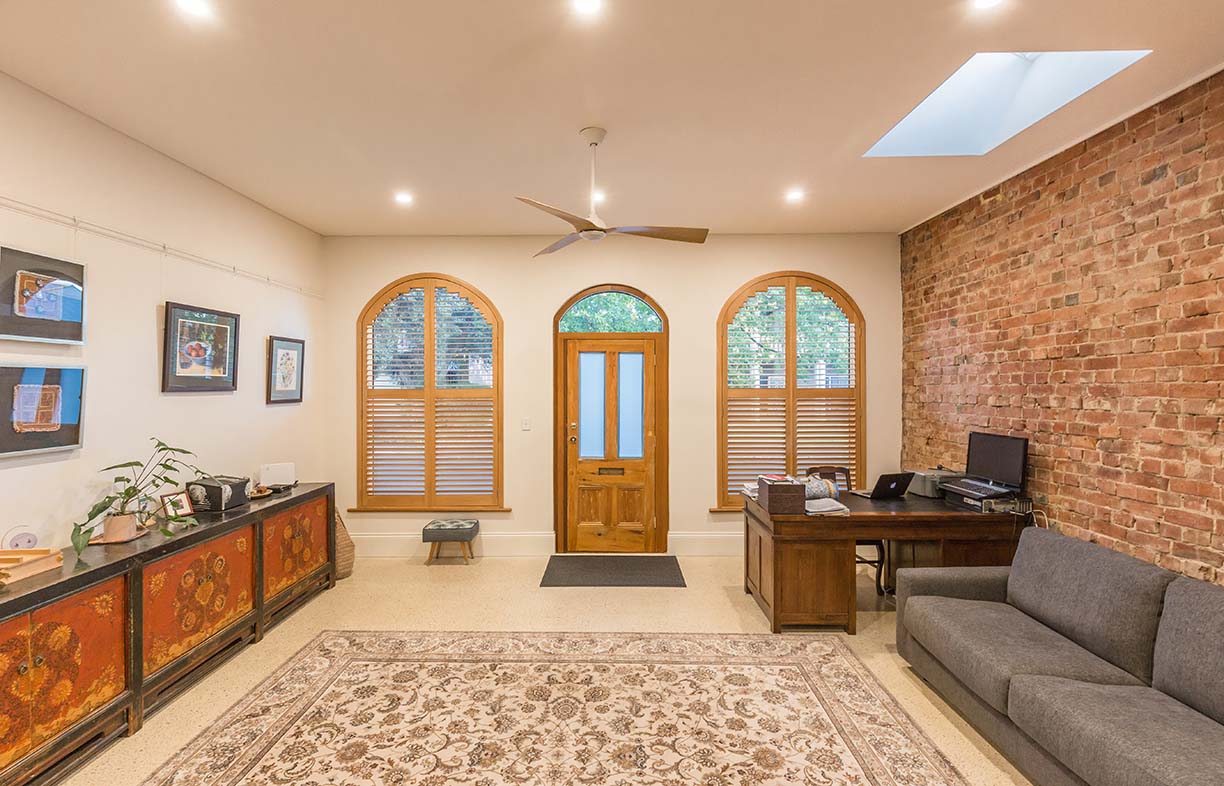 The couple are pleased to have achieved a renovation that didn’t increase the footprint of the house, but makes much better use of the available space. One of Jenny’s favourite spaces is the original shop, which they retained as one big room. It’s proved amazingly multi-functional, she says. “It’s a textile studio for me, a ‘making’ room for the grandkids, an occasional music studio and an overflow room to sleep visitors.”

The idea of reusing what they could was a source of great delight, and not just for the owners. “It was something quite special seeing plaster and render being removed, and beautiful stonework being revealed,” Jenny explains. “And talking to the older brickie who beautifully restored the shopfront facade, he said how much he appreciated and enjoyed the opportunity to work on such a project.”

The finished home has retained the quirkiness that Jenny and Julian loved at the beginning. “We’re very proud of what we have achieved. So many houses around us are being knocked down,” Jenny says. “Our home shows how clever, imaginative design can preserve an older building in an inner-city suburb, without compromising current standards of liveability.” 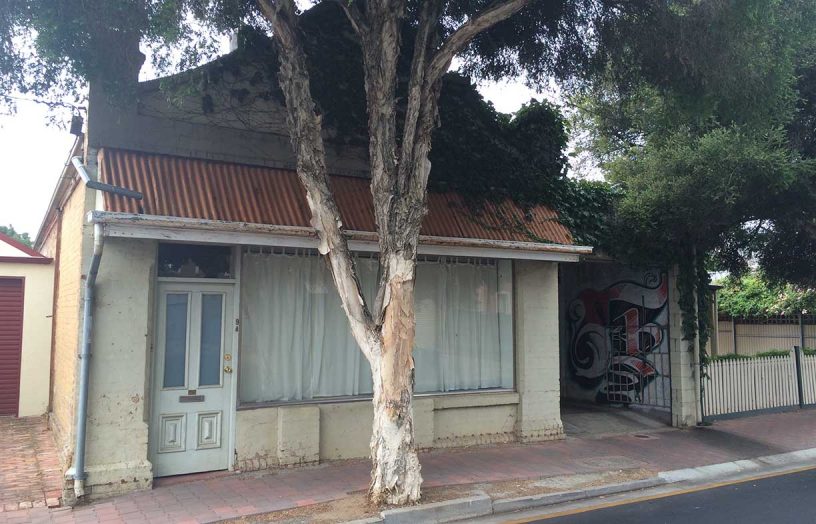 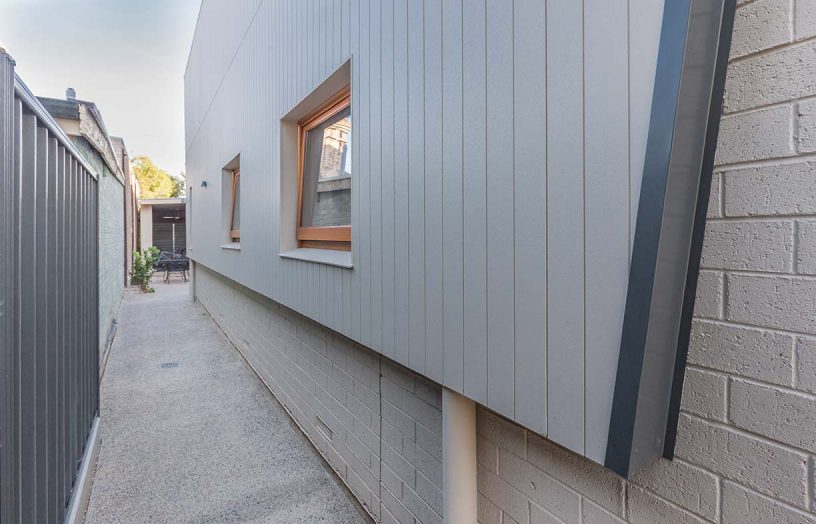 (Left) Before the couple took on the renovation project, the heritage shopfront was in a sorry state. (Right) An insulated skin clad with fibre cement sheet wraps the 1970s rear extension, vastly improving its thermal performance.
Designer
Julian Rutt, Lumen Studio
Builders
The Complete Renovators (heritage shop restoration) & Partoon Homes (rear section renovation)
Insights
“The main design concept for this project was about taking off the roof of the extension, raising the first floor to increase the amenity of the ground floor, then creating a combined roof and cladding ‘wrapping’ down over the external walls to create a whole new liveable upstairs space with a highly insulated second skin around the existing building.” - Julian Rutt, architect
Location
Parkside, SA
Cost
$600,000
Size
House 282m2, land 473m2
Energy rating
7.4 Stars