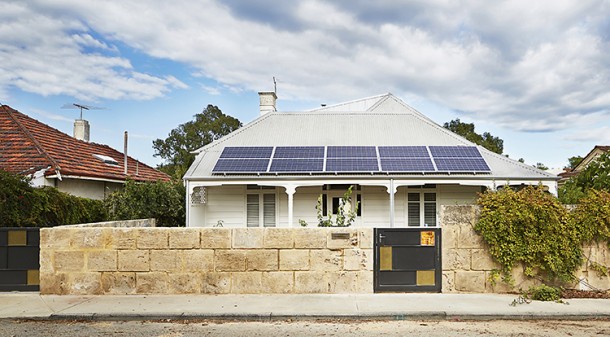 There is almost no hint of the rear addition from the front, but part of the 4.9kW solar system mounted on the verandah provides a clue to this home’s environmental credentials. 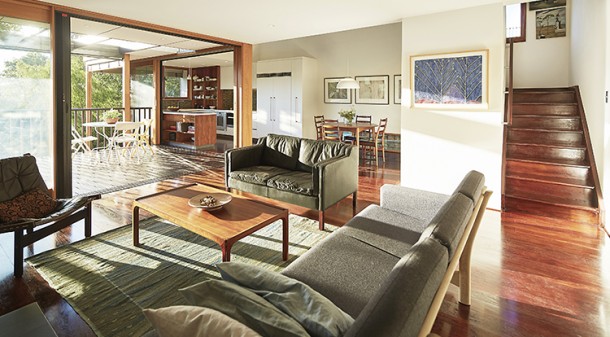 A small addition to the 1980s extension houses the new kitchen. The new design allows for a separation of the dining and sitting areas, and improves connections between the spaces. 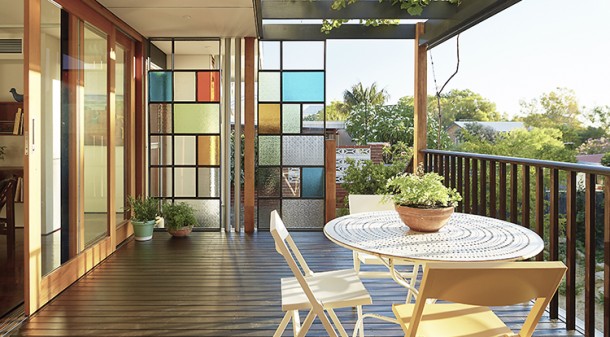 Highlight colours inspired by Erica and John’s extensive art collection appear here and there throughout the house, including the steel and glass privacy screen at the southern end of the deck. 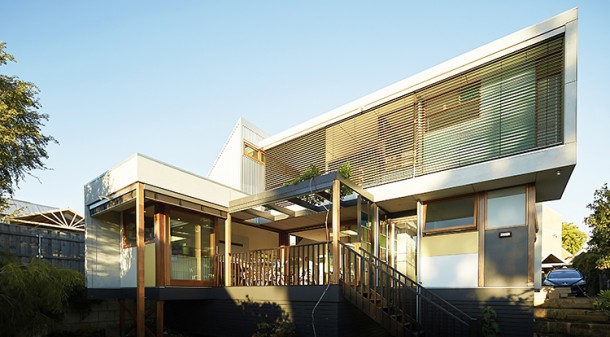 Architect Joe Chindarsi reworked the upstairs mezzanine bedroom as part of the renovation, enclosing it and adding an ensuite and a balcony. Facing west, the balcony helps shade the downstairs glazing from the hot afternoon sun.
< 1 / 4 >

The second renovation of this South Fremantle house has strengthened the owners’ connection to their home of over 40 years.

For 43 years John and Erica Harvey have lived in their South Fremantle house. Originally constructed in 1923 as a four-room workers cottage, they are just the third owners. The Harveys have undertaken two major renovations – the first in the 1980s, the most recent one in 2016 – both of them reworking the rear section.

Erica says they weren’t committed to any one outcome but wanted the whole house to work better now that it’s just the two of them at home, with regular visits from their adult children and young grandchildren. For their latest project, they approached architect Joe Chindarsi after visiting his own home on Sustainable House Day three years ago (see Sanctuary 31).

Joe opted to retain the earlier extension designed by John’s architect-brother in the 1980s, when the couple had young children. That decision had helped to reduce renovation costs while improving functionality and flow in the main living spaces.

Joe relocated the kitchen into a new section that extends three metres beyond the old perimeter, creating space in the existing rooms to separate the dining and sitting areas. The fireplace was moved into the centre of this reconfigured space and the adjacent service zone was reworked, creating a slightly larger bathroom and a sunny combined laundry and sewing room. The installation of new windows – at floor level and up high near the roofline – introduces natural light from various directions throughout the day.

As part of the first renovation, the couple had moved upstairs to a mezzanine bedroom that was open to the living area below, which worked well enough when their children were small, but wasn’t as conducive to having family and friends to stay. Also, the low-pitched roof reduced the useable floor space and there was no bathroom upstairs.

Joe addressed these problems by raising the southern side of the roof slightly, enclosing the bedroom and adding an ensuite, dressing room and protected balcony. Now, the upper floor is a serene and generous retreat that takes full advantage of the outlook to the distant Indian Ocean, with the added bonus of capturing prevailing breezes.

The project also included new insulation and photovoltaic panels, which boost sustainability credentials and will reduce their heating and cooling costs. These works didn’t add much in the way of additional space, but they have made a dramatic difference to how much they enjoy their home, Erica says.

“We wanted to go more minimal, and we’ve really achieved that,” she explains. “It has a calming effect on us and other people who visit. Everyone walks in and feels relaxed, because the flow is much better. And because it’s so open now, we borrow views of the trees in the surrounding yards and feel like we are sitting up in the canopy.”

In keeping with the modest ambitions of the project, the material selection was kept deliberately simple. Timber was used for exterior detailing in locations where it has protection thanks to wide eaves, with a combination of low maintenance materials – self-finished and painted fibre-cement cladding, vertical boards and corrugated steel cladding – adding texture and interest to the facade.

From the rear, it’s easy to discern the changes to the original roofline, with the new volumes arranged around and projecting outwards from an enlarged deck. Large banks of glazing on the south-western and western elevations are protected by louvred aluminium shutters that open automatically when the prevailing breeze picks up, as it does most afternoons, naturally cooling the house from back to front.

The Harveys have an extensive collection of indigenous and modern art, built up over decades. Inspired by this, Joe developed a colour palette that appears throughout the house in various guises, including: steel-framed and coloured-glass privacy screen beside the rear deck; steel and glass front gate; and painted sections of fibre-cement sheet that frame selected windows.

Internally, the palette is more subdued and takes its cues from the existing fabric. Where new floors were required, they were matched to the original jarrah boards; the kitchen cabinetry mimics the 1970s joinery the couple lived with for many years; and the original staircase and handrail remain in place, albeit with a new negative rebate detail that ties in nicely with the mid-century modern furniture in the adjacent living area.

Erica says that while they initially had some misgivings about renovating again, the project ran smoothly and to budget (despite the addition of a few splurge items, such as Louis Poulsen light-fittings). “You have to really want to renovate, because it is hard and a bit scary, but we’ve just been so happy with the results,” she says. “Yes, we love it, every day,” John adds.

They credit that outcome to their architect, who they met almost by chance. “We weren’t even looking for an architect, we’d had plans drawn up but we were interested in learning more about sustainability, and we established a good rapport with Joe,” Erica says. “He was very quick to understand what we wanted, and he gave us plenty of room to discuss the details as the project progressed. I remember saying to him: ‘I just want to be surprised’, and his response was: ‘This will be so much better than you can imagine’. And he’s right, it is!”

And there aren’t many people who can say that about a house they’ve lived in for more than 40 years.