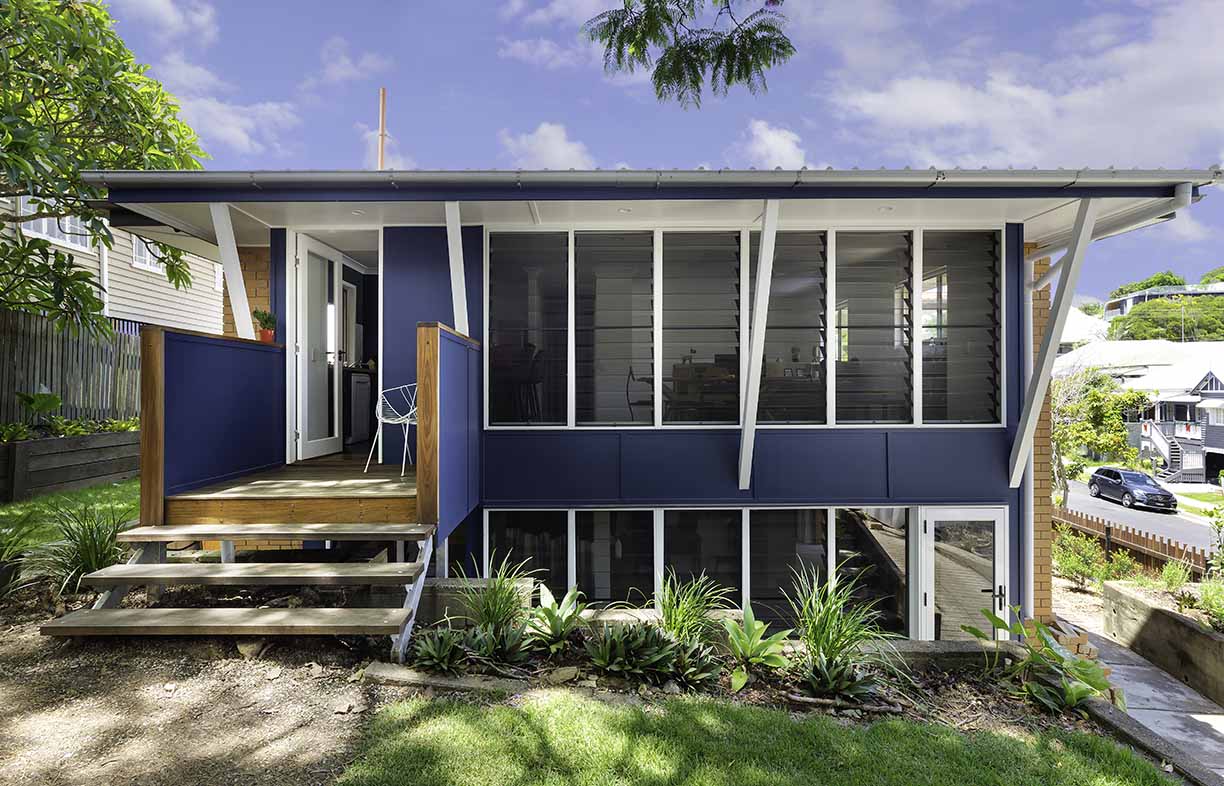 A double-height bay window on the north facade transforms the house, admitting light and breezes and improving connection with the garden.

The inner Brisbane suburb of Red Hill is filled with characterful timber Queenslanders. When Hugo Salmon and his architect father Jeremy stumbled across an affordable, ‘ugly duckling’ 1960s brick home in their midst while hunting for Hugo’s first home, they could see potential in its good bones and the walkability of its location.

House purchased and initially rented out to help pay the mortgage, Jeremy immediately started sketching ideas for modest renovations to improve the gloomy interior and open it to the north. Hugo’s partner Muirgen O’Seighin wasn’t as quick to see the house’s potential, saying “it wouldn’t have been my first choice of house to rent”. Four years later, however, as the master plan was refined during Covid lockdown in 2020, she was inspired to invest in the project. By pooling resources, the couple were able to look at slightly more ambitious adaptations to improve the house’s internal planning, natural ventilation and outlook. Their brief was a house that could evolve with them, starting as a sharehouse but adaptable to accommodate other household types such as a young family or dual occupancy. 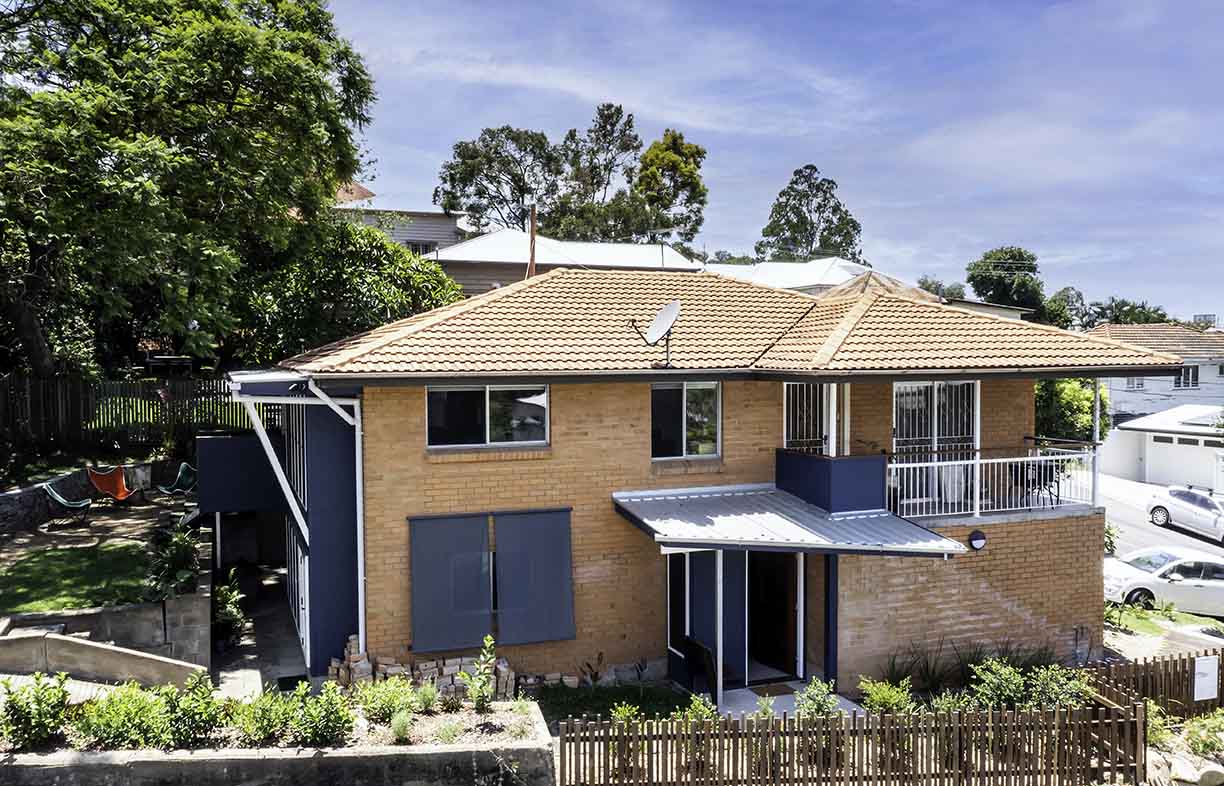 Upstairs, the kitchen and living room were awkwardly separated by a bedroom, and another poky bedroom occupied the north-east corner. By relocating the entry and removing two main walls, a larger living, dining and kitchen space was created to the north, and the former living room became a generous bedroom with private balcony. The windowless north wall was replaced with an expanse of louvres pushed out to the original eave line, filling the living space with sunshine, breezes and views to the previously disconnected garden.

Downstairs was a dark, under-utilised storage space. “I was always excited by this space as a living room because of its slightly subterranean qualities, being cool and private,” says Jeremy. The floor level was lowered to give a more generous ceiling height for Hugo and Muirgen’s bedroom, a bathroom and a second living room that functions as their private retreat or as a shared larger entertaining space. The burnished concrete slab is edged here by built-in seats which double as guest beds, backing onto the new louvres facing north. 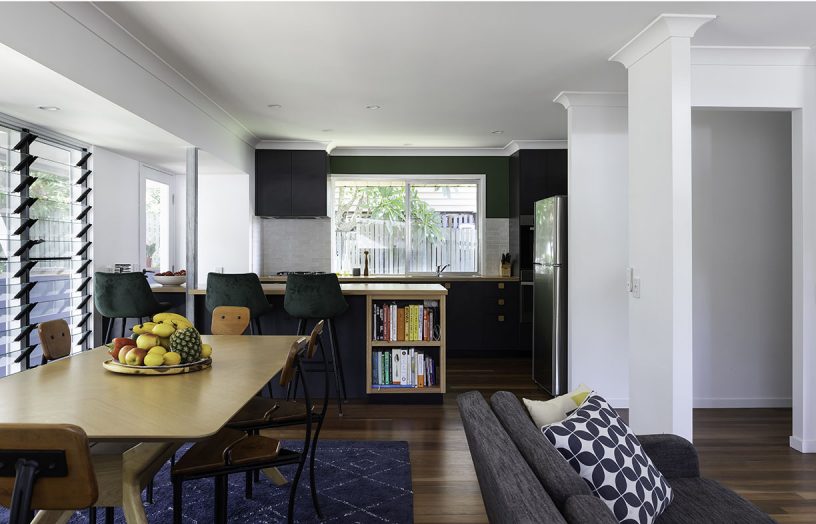 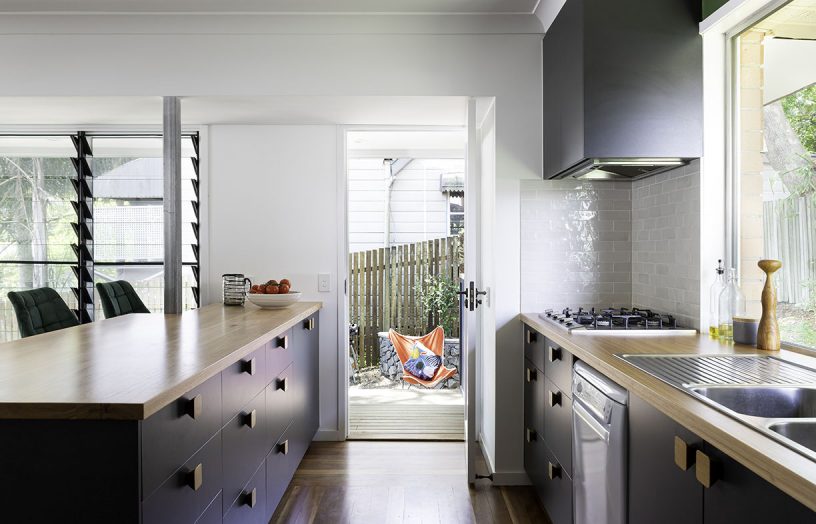 Occupying the north-east corner where a bedroom used to be, the new kitchen features two ovens and a large pantry for effective sharehouse use.

The changes to the house plan facilitate a comfortable sharehouse arrangement for the young owners and two friends, helping with affordability and enabling a higher occupancy rate. The four residents are old friends and have lived together at different times and in sharehouses through Covid, so they knew what makes sharing work. All bedrooms have sufficient space to comfortably work or study from home. The upstairs bathroom was reconfigured to suit ‘rush hour’, separating shower, toilet and vanity. The new bathroom downstairs is intentionally not an ensuite, to make it accessible to all. The housemates enjoy cooking, so a large pantry and two ovens make the small kitchen work efficiently. As work and shops are within easy walking or cycling distance, the single garage is a shared space for art, laundry, one car and bicycles. A digital keypad enables bicycle access directly into the garage without keys. These design decisions make the current household flow well but will also suit a dual household or family.

Hugo and Muirgen didn’t consciously have sustainability at the forefront of their design brief, but the outcome is thoroughly sustainable. Driven by their modest budget and a desire to minimise waste and consumption, the alterations retained as much of the original fabric of the house as possible. Removed hardwood studs were transformed by Jeremy and Hugo into a bed, built-in robes were relocated and bricks salvaged for landscaping. The new layout has improved natural ventilation, and added insulation and thermal mass reduces the need for mechanical cooling and heating. Everything is considered and built to last. 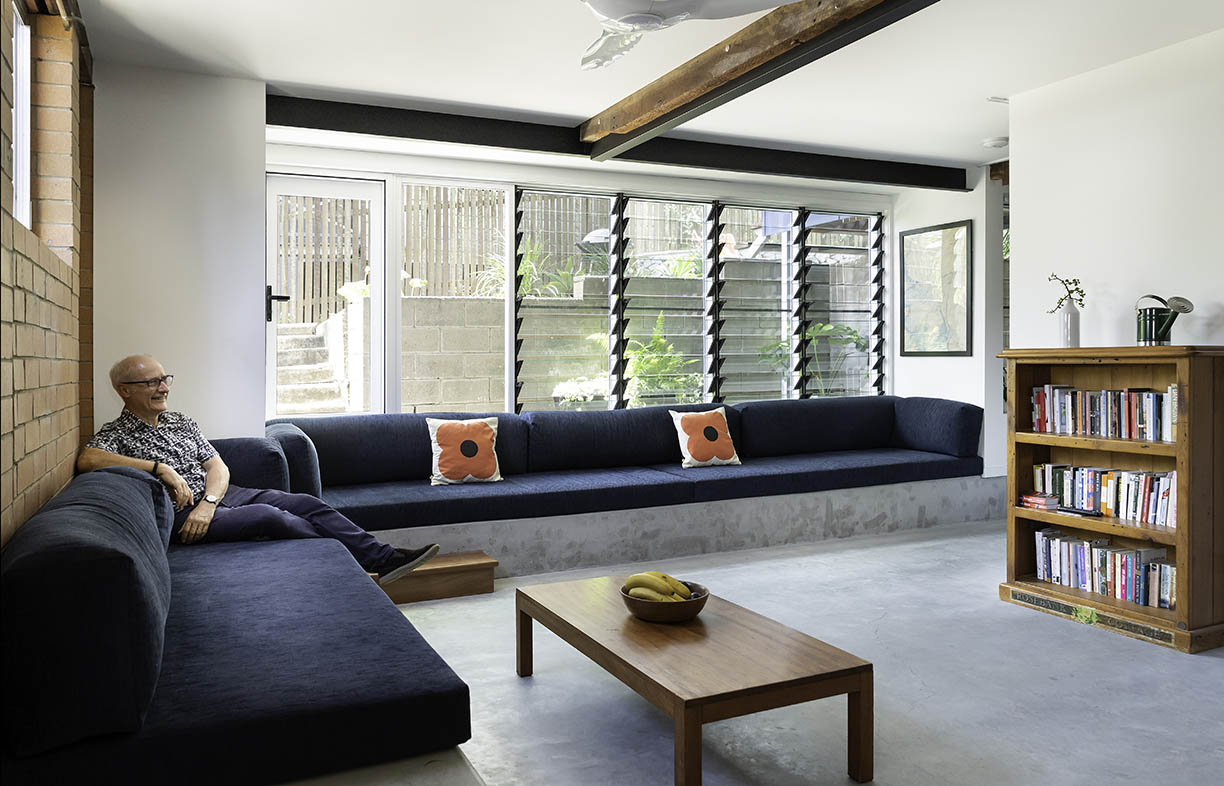 The metamorphosis of their home was impressively cost-efficient, considering it included a whole new living area, the fitout of two bathrooms and new kitchen, full rewiring and replumbing, a new retaining wall in local bluestone to the street frontage and all the landscaping including fencing. The project now complete, Muirgen and Hugo enjoy the ongoing social and financial benefits of the sharehouse model. “Financially, it’s a whole different game when you’re earning rent and splitting utility bills,” says Hugo.

The new connection with their surroundings has led to an interest in gardening and passers-by frequently compliment them on the improvements they’ve made. Large expanses of heat-absorbing concrete around the house were replaced with sleepers, mulch and native vegetation to provide wildlife habitat and natural shade from the western sun. Until the trees and shrubs are full size, awning blinds (bought on sale) have been installed to keep the sun off the bricks and west-facing window downstairs.

Before the renovations, neither Hugo nor Muirgen were particularly practical. “I wouldn’t consider myself a handy person, but I’d now give things a go,” says Muirgen. Being physically engaged in the renovation has not only saved them significant costs but has been empowering, giving them many new skills including colour and finishes selection, painting, carpentry, insect screen making and landscaping. The final one was cabinetmaking – constructing 26 plywood boxes as a decorative and display screen to the internal stair and storage in the lower lounge and bathroom. “We had an unreasonably good time building them,” says Hugo.

­Jeremy’s design motto is ‘maximum transformation for minimum change’. The changes to the house are subtle from the outside but transformational to the interior. There will be future upgrades as budget permits – a solar PV system, insulation to the brickwork and upgraded windows – but for now the house works brilliantly. “The house has so much more utility now and the value of two living spaces is enormous,” says Hugo. Muirgen, who has been friends with their housemates since high school, relishes the functionality of the sharehouse. “I’m with all the people I’ve ever lived with after moving out of home – all the people I love in one spot.” She also reflects on how the house feels even more like home because of the effort they’ve put in. Hugo adds that the outcome “is what we wanted and it happens to be sustainable. That’s awesome.” 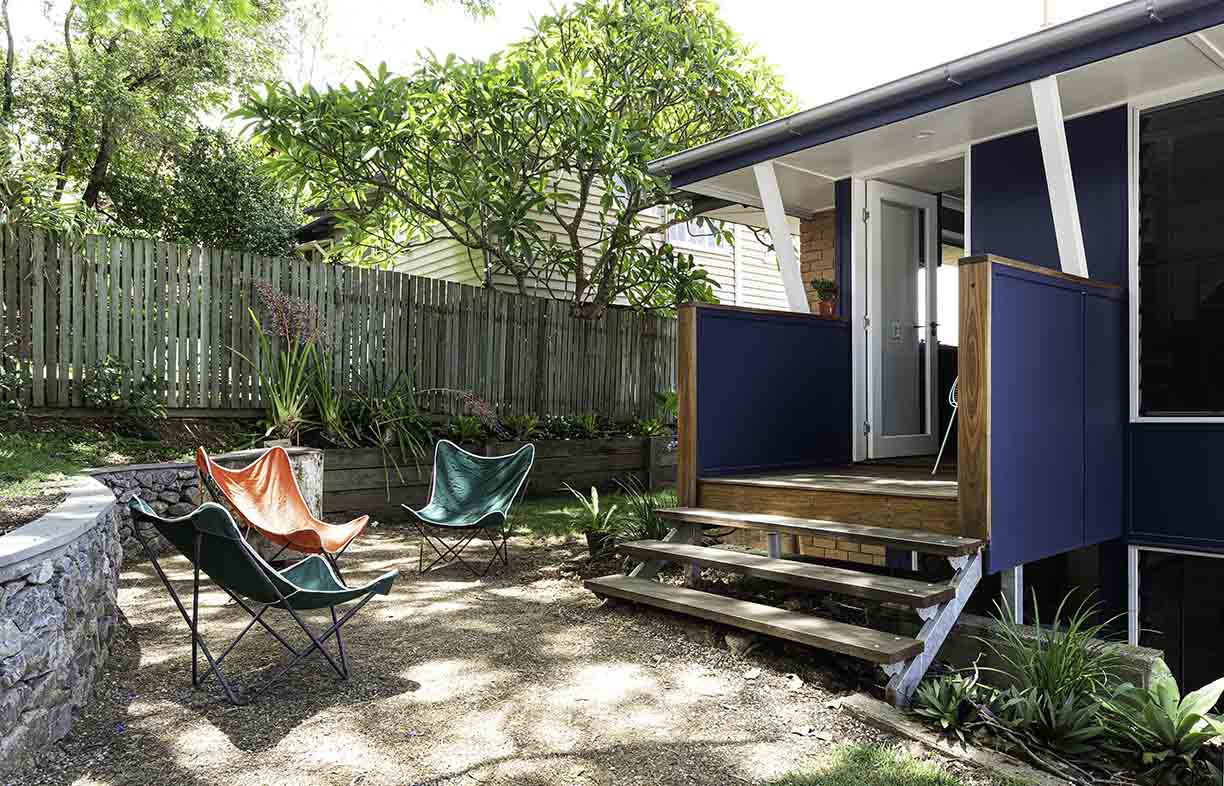 The new connection with their surroundings has sparked an interest in gardening for the housemates.
Designer
Jeremy Salmon Architect
Location
Red Hill, QLD
Cost
$290,000 including landscaping
Size
House 214m2 (including garage/store); land 415m2