Strawbale in the suburbs 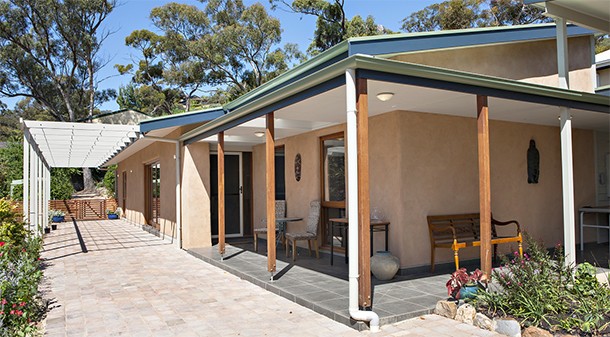 Appropriately designed shading on the north contributes to this rendered strawbale house’s passive solar performance. There are no windows on the west, and the house is shaded on that side by the garage and a large pine tree. 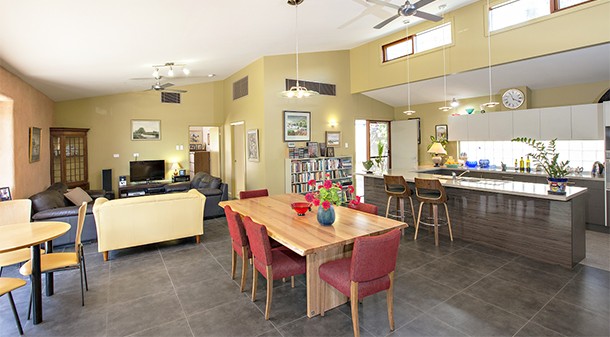 The big central room is Margaret’s favourite thing about the house. “The room just works so well. It has a cosy little lounge space that invites people to talk. It has a stacking sliding door – we have a little breakfast table by it where the sun streams in.” 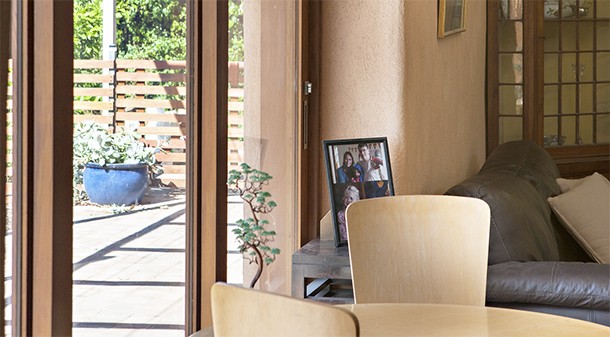 Windows and doors are cedar-framed double-glazed units with a Viridian coating to improve their thermal performance. "The deep reveals in a strawbale house give a feeling of solidity and security," says Bohdan. 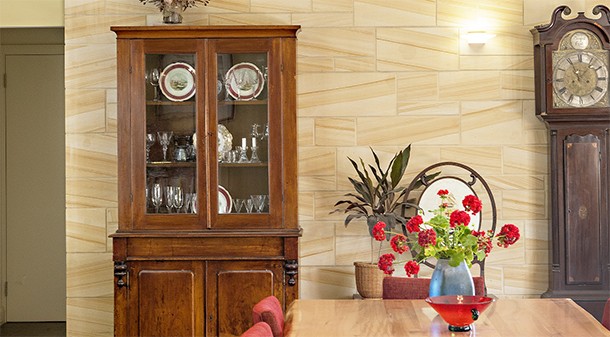 Along with the tiled concrete slab floor, a feature stone wall in the main central room acts as thermal mass to help regulate the internal temperature.

To bring in more natural light, Charles and Margaret opted for a splashback of glass blocks on the south wall of their kitchen. Overhead, clerestory windows are operable to provide ventilation and night purging. 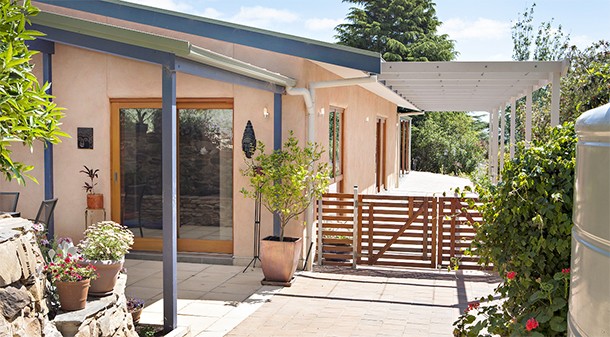 Cosy and gas-free! This Adelaide household even runs its electric car from a solar + battery system, plus has roofspace set aside for future neighbourhood energy projects.

For committed ‘greenies’ Margaret and Charles Madden, building an eco-house had been on the bucket list for a long time. Their opportunity came with the purchase of a terraced hillside block in the Adelaide suburb of Lynton, with good solar access to the north and views of the sea. A chance encounter with local sustainable designer Bohdan Dorniak led to a fruitful partnership that resulted in the Maddens’ cosy and energy efficient strawbale home.

“I mentioned strawbale kind of as a joke when we first met,” laughs Bohdan, “but it quickly turned into a serious option – Charles and Margaret warmed to the idea straight away, they liked the idea of its comfort, warmth and acoustic properties.” Margaret explains: “We didn’t know exactly what we wanted, but having lived in a house with lots and lots of windows that was always cold, we knew what we didn’t want. Strawbale provides terrific insulation.”

Bohdan and his team have a solid track record with the building material, having designed over 100 strawbale homes. “It has an organic feel about it,” he says. “The minute you step into a strawbale walled place you just notice the softness of the walls and the feeling of being enclosed by something that is quite warming. It’s non-toxic, and it absorbs moisture – it’s a healthier wall than a plasterboard wall that’s been painted.” And although it’s most often associated with rural builds, it’s certainly possible to use this material in the suburbs. “Strawbale walls are about 500mm thick, as opposed to 300mm for double brick, so the external footprint does increase,” says Bohdan. “But small is beautiful. By building a house only as big as it needs to be, you can have space for strawbale walls even on a suburban block.”

Bohdan’s design for Margaret and Charles features rendered strawbale external walls, an internal stone wall and concrete slab floor for thermal mass, and a long narrow plan allowing north-facing windows in every room. With the help of double-glazed windows, appropriately designed shading, and R6 insulation in the ceiling, the house achieves an impressive 8.5 Star energy rating.

Modest in size at 157 square metres, the house features a central room containing a kitchen, a dining area, a sunny sitting spot and a lounge. To one side is the bedroom and bathroom, and to the other is a pair of studies and a laundry. Outside, a covered terrace wraps around the north-west corner of the house, and a pergola to the north will one day be covered with deciduous greenery for summer shade.

There is no gas connection to the house – a decision made for both environmental and health reasons. “We have lived all-electric for many years, so it wasn’t difficult,” says Margaret. The 5kW solar PV system helps power the house and charge the couple’s electric car, and they are in the process of installing four Enphase batteries to make the most of their solar bounty. “The roof was designed to maximise exposure to north sun – space for our solar panels plus extra for other possible future solar uses, like renting space to a neighbourhood micro-electricity grid.”

The finished house is lovely to live in. When it comes to internal temperature, “it keeps itself in the low 20s most of the time in winter, with only occasional use of the heater,” says Margaret, “and on the hottest days in summer it often maintains 10 to twelve degrees cooler than outside. It’s changed my life, it’s so much easier to be happy and peaceful in a house that maintains the right temperature.” 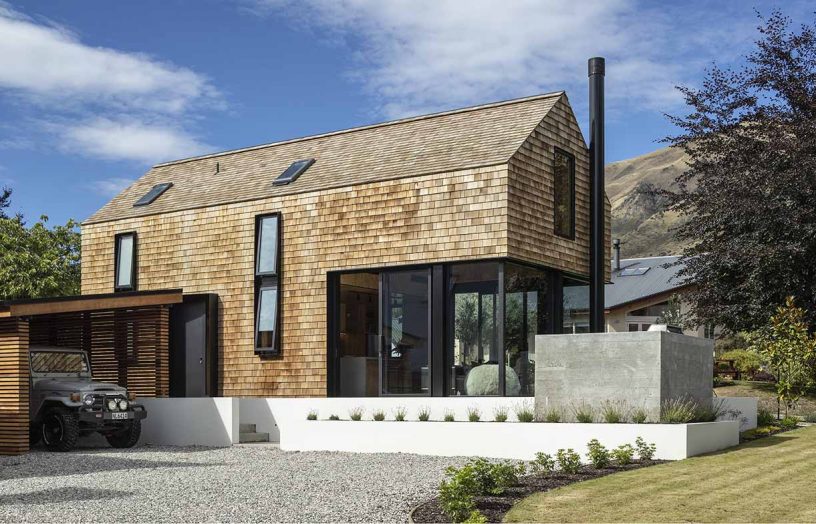