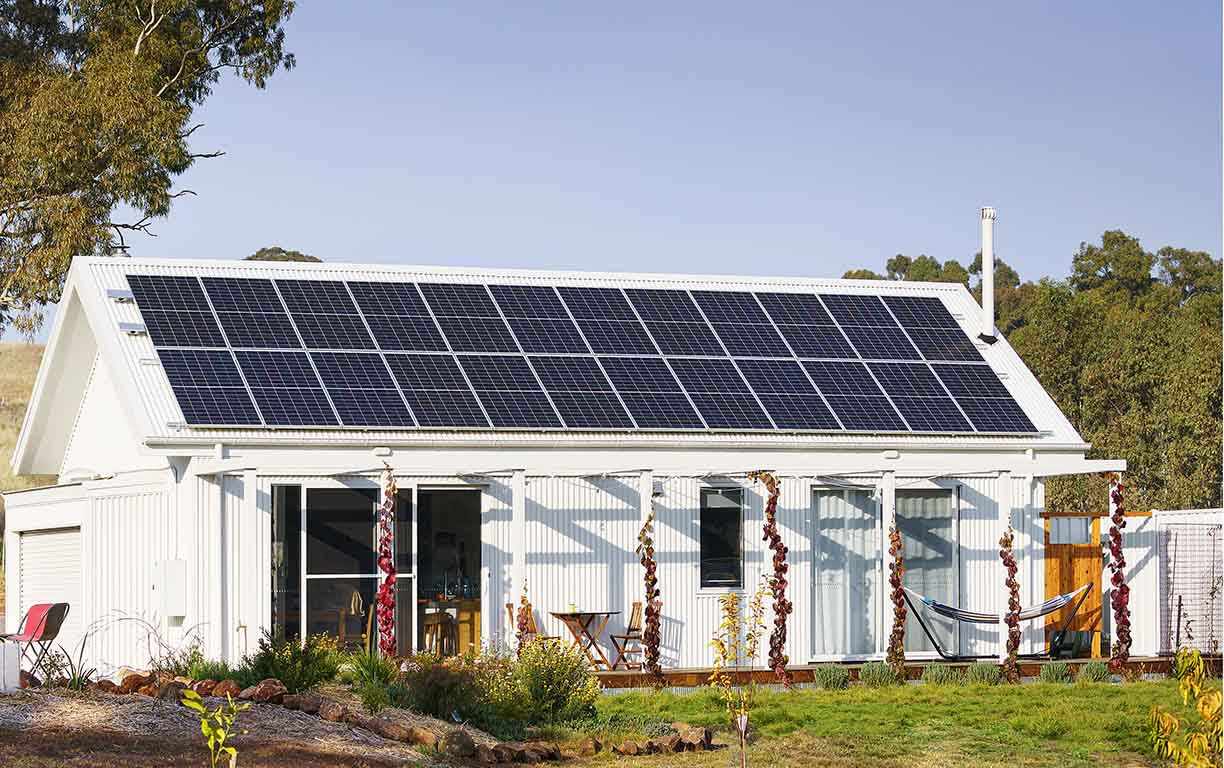 Off-grid and designed for energy efficiency and simplicity, this treechanger couple’s new home in central Victoria is a delight.

It’s a sure sign of welcome in a neighbourhood when strangers leave notes in your letterbox appreciating your new house. Such was the experience of Brendon Hillermann and Josie Ryder when they moved into their new home in a rural hamlet near Castlemaine in central Victoria. “We’ve had really positive feedback,” Brendon says. “It’s awesome that people walking or driving past have such appreciation for the house.”

Maybe it’s the gleaming white corrugated steel exterior that stands out amid the rolling hills of the surrounding countryside, or the bold statement of sustainability the home makes with its 24 solar panels on the north-facing roof, or the fact that it’s small, neatly-proportioned and proudly so. Or it may just be a combination of all those things that captures people’s imagination.

Josie and Brendon bought their half-acre block aiming for a lifestyle shift from inner-urban Melbourne. Used to living in apartments and appreciating modestly scaled spaces, they wanted to build their dream home small: “Our approach has always been to not have stuff for stuff’s sake,” Brendon says. “We wanted a space that suited us and having a small home means we have a smaller mortgage and a place that’s easier to maintain and still really comfortable.” 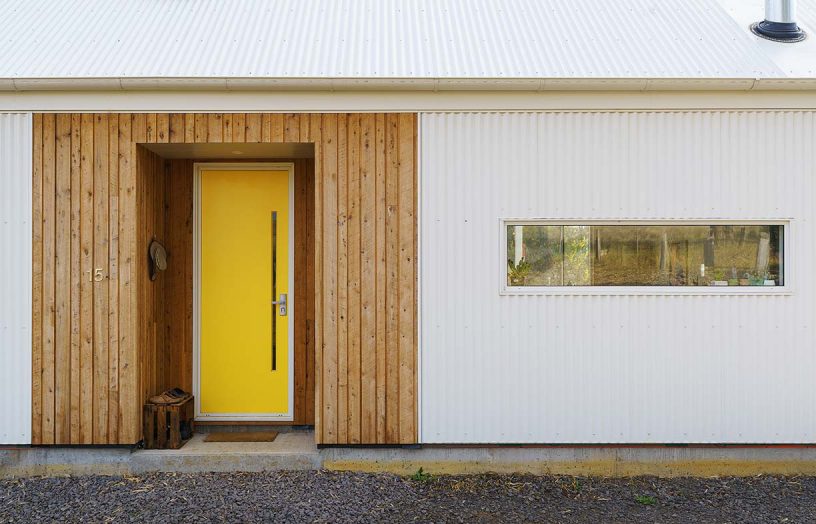 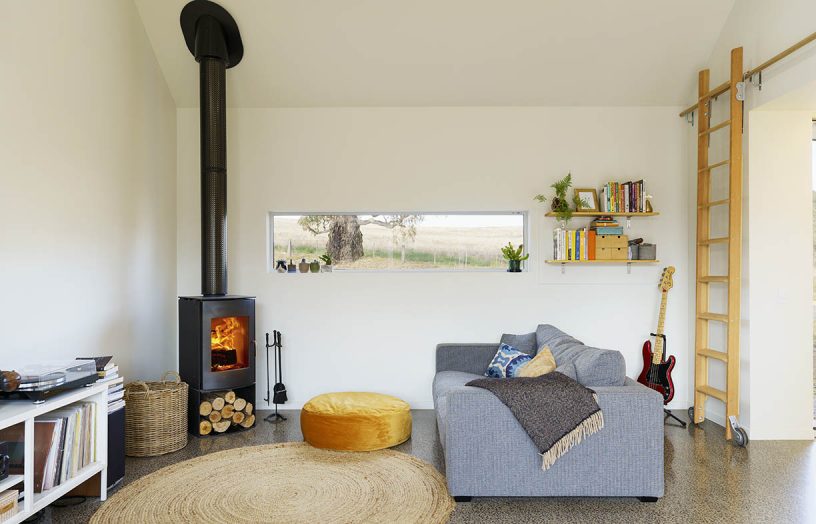 Small windows to the south frame paddock views without compromising the thermal performance of the well-insulated building envelope.

For their home, the couple chose Small Change Design and Construction, a Melbourne-based company dedicated to small-footprint, environmentally friendly homes. After consulting with director Sally Wills, they chose the ‘Bantam’ design from the ten standard designs the practice offers, slightly customised to suit their needs. The house was built by LG Builders and completed in 2020.

At just 72 square metres, the house belies its size with a spaciousness created by the cathedral ceilings. Past the cypress pine shiplap cladding feature at the front door, the entry opens to a living and kitchen area with a wood heater in one corner and access to a roof loft for storage. There’s a narrow study space, one bedroom and a north-facing pergola with deck and deciduous vines.

Thermally, it achieves an impressive 7.2 Stars thanks to roof, ceiling and wall insulation, a polished concrete slab and aluminium-framed double-glazed windows. There are two ceiling fans and cross ventilation paths have been designed to allow the house to cool down on summer nights. As they are not connected to the electricity grid or mains water, Brendon and Josie’s power comes from their 7.9-kilowatt solar system with batteries as well as a backup generator, and for water they rely on a 40,000-litre rainwater tank. A worm farm system takes care of their septic waste. 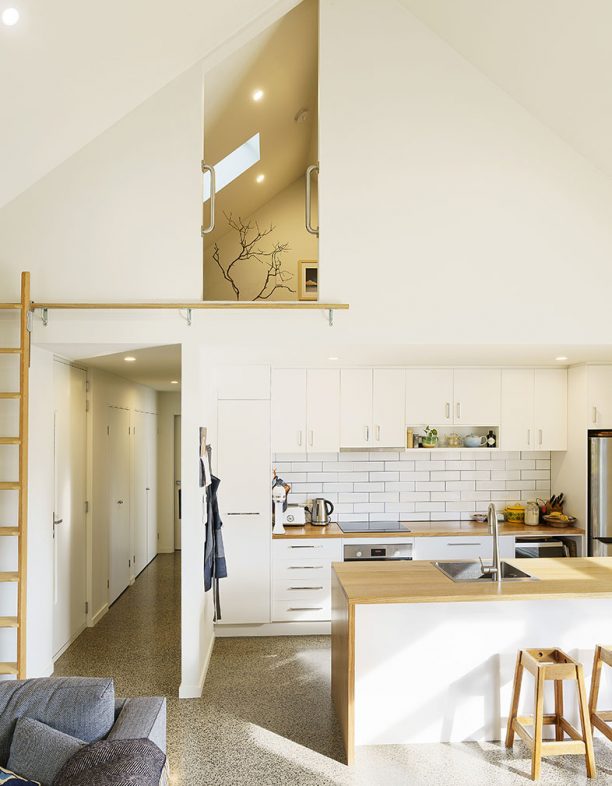 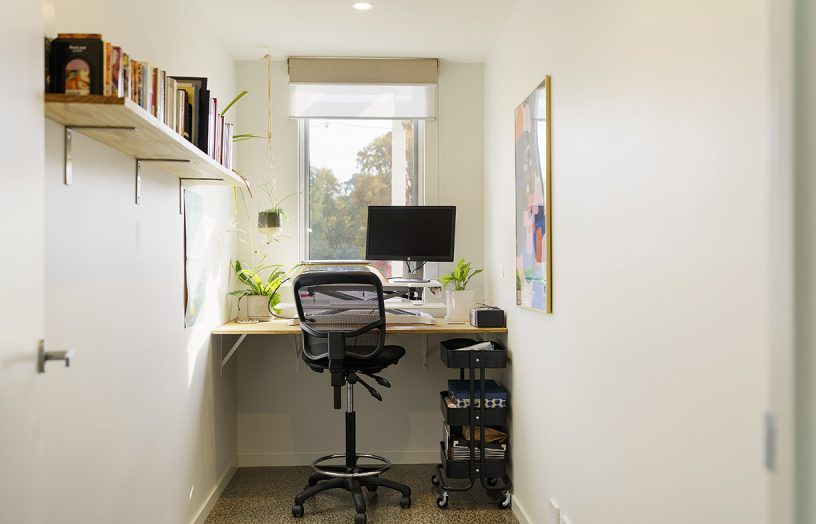 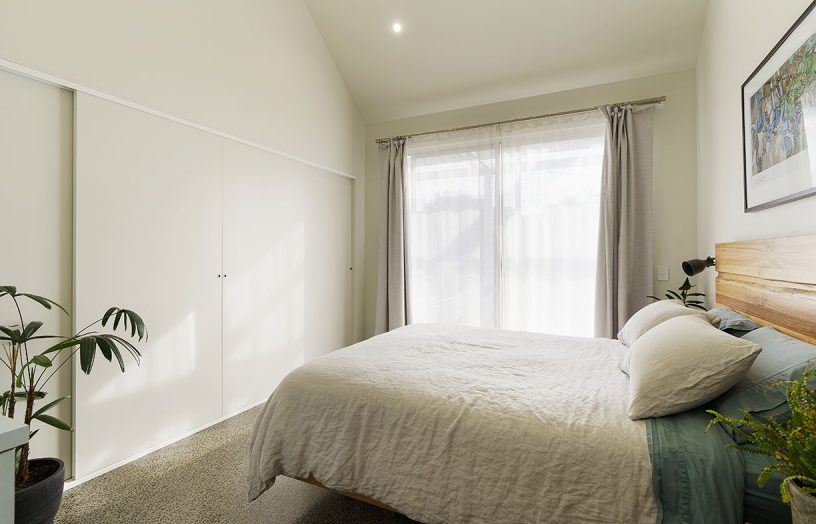 The couple are impressed with the spaciousness of their new home. “We moved the furniture into the house when the build was finished and there was actually a lot of space: it didn’t feel crowded,” says Brendon. The study space is diminutive but offers a quiet retreat for working from home.

The greatest challenge the couple has faced has been their water supply in an area not known for its high rainfall. “We were caught a bit off-guard there,” Brendon says. “A small footprint is great but we don’t have a lot of roof space to capture rainwater, so our tank doesn’t fill up much when it rains. It’s an interesting problem to solve.” They have built a tool shed to increase their ability to harvest rainwater, are considering a carport for the same purpose and have planted water-hardy native plants on the property.

Despite this small issue, Brendon and Josie are delighted with the house – its simple functionality, its excellent thermal performance and comfort: “This is by far the best place we have lived in. We appreciate it because it’s so well designed.”

Sally says small homes are more economical to heat and cool, are easier to clean, involve less clutter and often mean people can include some bespoke materials and fittings that they wouldn’t be able to afford in larger houses. She started her business in 2015, aware of growing house sizes in Australia and realising there was a gap in the market designing for people who wanted to buck the trend. “I also wanted to design and build homes that were sustainable,” she explains. “I realised that small homes were a much more effective option if Australia was serious about cutting emissions and that all the green ‘bells and whistles’ don’t count for much if you have two people rattling around in a 275-square-metre home.” 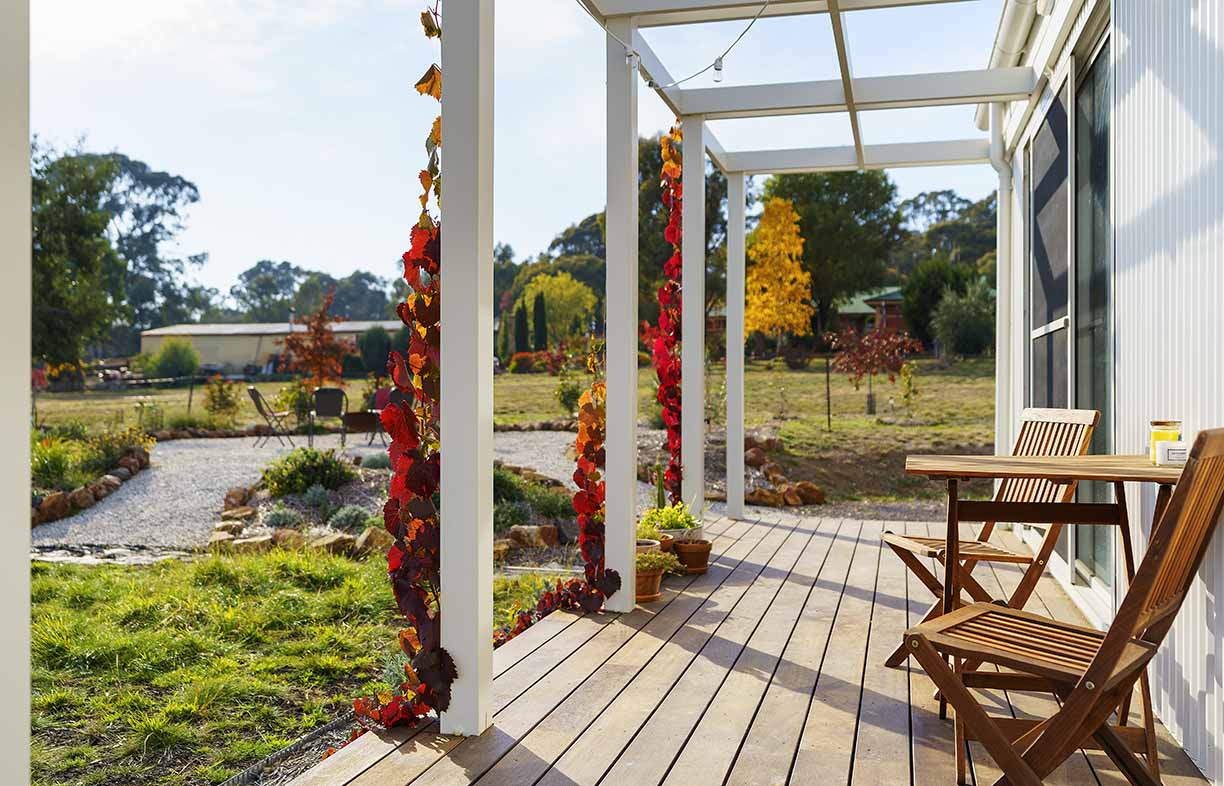 Deciduous vines are already flourishing on the pergola, providing autumn colour. When they grow up enough to be trained across the top, they will provide cool summer shade.

Small Change’s standard designs all come in several sizes – the Bantam, for instance, can be built to a truly diminutive 42 square metres, as well as 57 and 72 square metres. Sally says her designs can all be tweaked and are seen as a starting point: “I designed them with different orientations in mind and various footprint options to suit very small lots. We can either customise these designs or start from scratch depending on land and requirements. Brendon and Josie’s land allowed great northern solar access. The Bantam design worked really well for their orientation – we added a pergola and moved a few walls around internally to suit their needs.”

“I would absolutely recommend people build small homes,” sums up Brendon. “We have got used to enormous properties, but you have to ask questions like, ‘Why do I need all that space?’, ‘How can I live most comfortably?’, ‘How much am I prepared to spend on heating and cooling?’ The decision to go small and off-grid in no way feels like a huge compromise in order to be sustainable. In fact it has led to life feeling more luxurious and abundant.