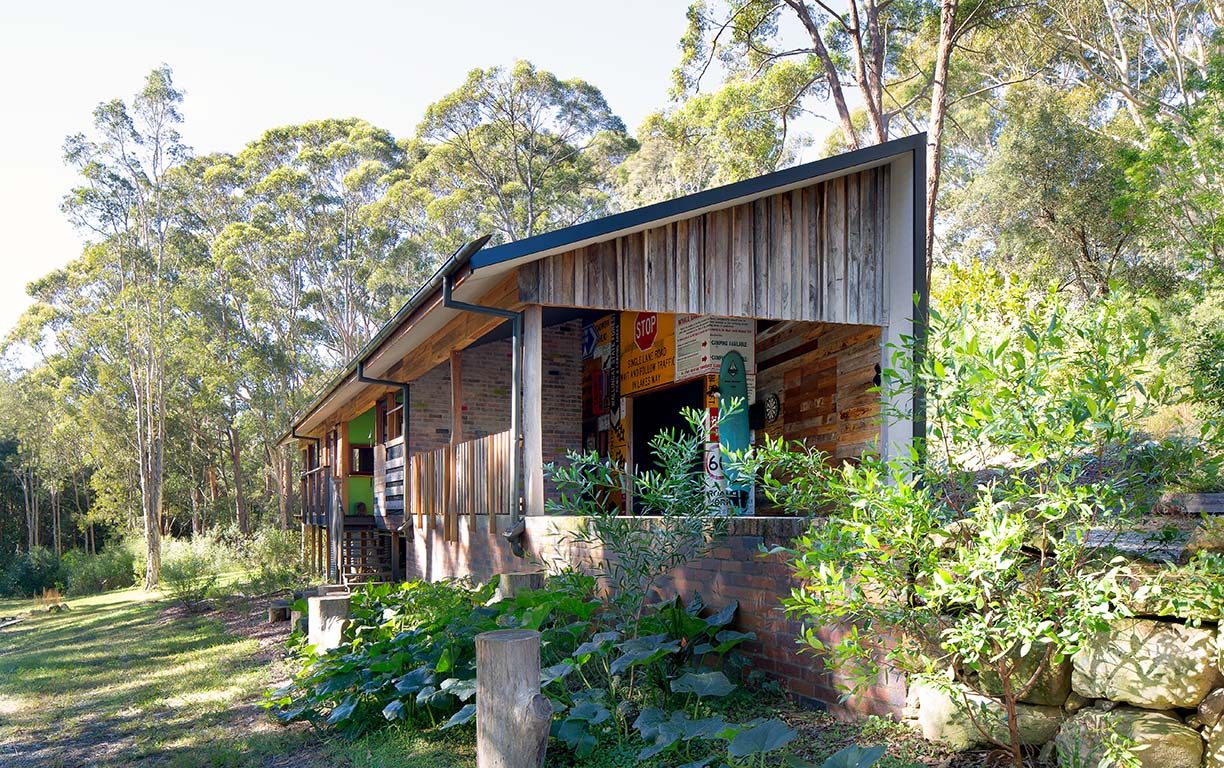 Ian and Kate’s modest shack was designed to be flexible in its use to suit a range of potential residents. A load of salvaged timber Ian sourced from a local mill was used for cladding.

A compact, versatile and functional home on the New South Wales mid-north coast makes the most of recycled and reclaimed materials to create a cabin-like feel.

The Shack, designed by architect Ian Sercombe, is a compact home purposefully designed to suit a range of people and their varied needs. Ian’s partner Kate McLean wanted to build a small investment property that could comfortably accommodate a couple, a single, an elderly person, or a small family – over time that might be Ian and Kate themselves or extended family members, or short- or long-term tenants. They purchased a 2.5-acre block of land in Charlotte Bay on the New South Wales coast between Newcastle and Port Macquarie, and built a super functional and versatile home using local, found and upcycled materials.

Ian designed the house with a wedge-shaped plan influenced by the slope of the site. The rear southern facade sits on the contour of the land to avoid the need for excavation, and the front northern facade extends from the carport at grade, to the living area, bedroom and deck at the eastern end of the house which sits 2.5 metres above ground. Surrounded by bushland, the elevation creates the sense of being in a treehouse and provides space for the rainwater tanks to be located under the house. 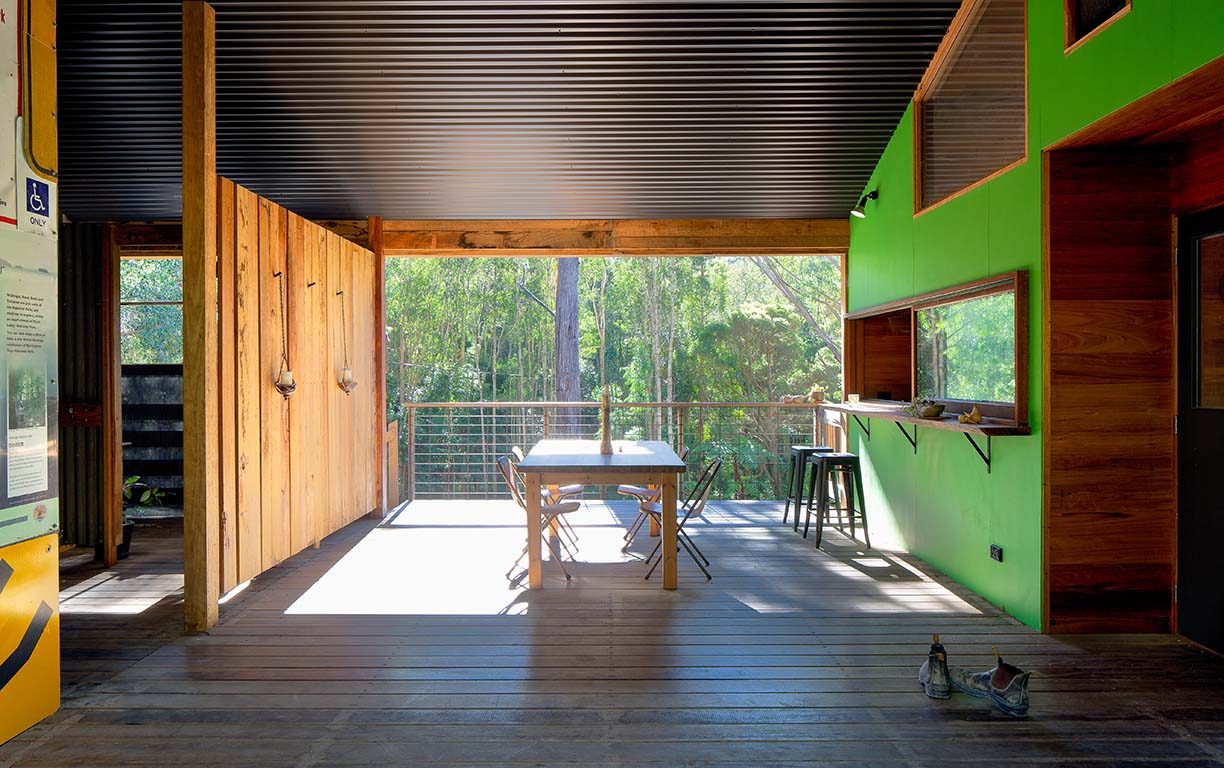 The covered breezeway provides plenty of space for outdoor living, with a servery window through to the kitchen and views to the surrounding bush. A large sliding door on the southern end can be closed in bad weather.

The interior rooms of the house comprise 60 square metres of the building, with the remaining 110 square metres given over to the carport, storage, post-beach facilities and decking. Everything is on one level for easy access by car and foot, and a breezeway in the centre of the house facilitates cross ventilation.

“When it rains, it pours,” says Ian of the NSW mid-north coast, so the covered carport doubles as a games room, with a brick wall and high ceiling allowing for cricket, tennis, darts and netball. The bricks are locally produced, and glazed bricks add a pop of colour. The colour continues in the old signs, given away by the local National Park office, that clad the adjacent storage room. Beyond the brick wall there is a surfboard rack, basin and semi-outdoor shower, making it easy after a surf. 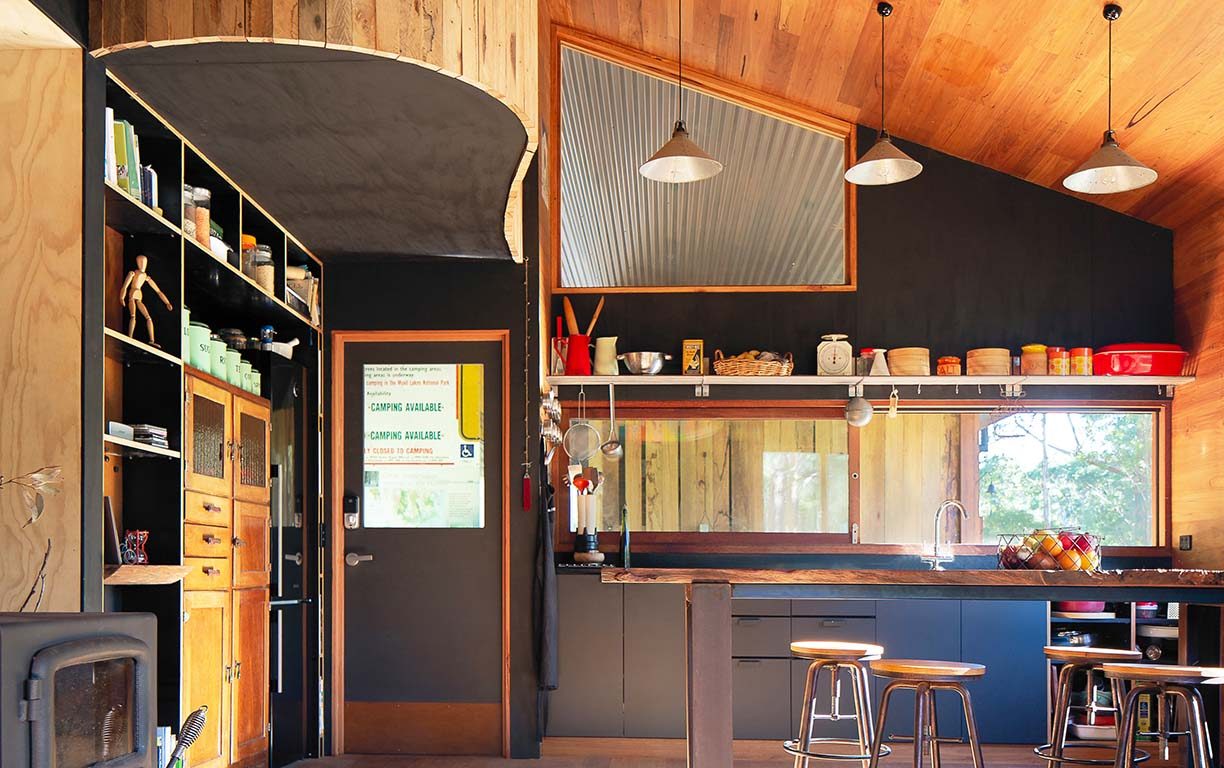 The curved wall of the loft above the kitchen is clad with rough-sawn timber for a tactile, cabin-like feel.

A 4.2-metre-wide covered breezeway separates the carport from the house proper. It is open to the north, and a large sliding door on the south wall closes it off during inclement weather. Lounging and dining areas allow for outdoor living year-round, and a servery window slides across to connect the breezeway with the kitchen.

Inside the house, the kitchen, living and dining areas are along the north, and two bedrooms and a bathroom along the south. The main bedroom has a desk and north-east facing deck, and louvres between the bedroom and living room open for light, breeze and views. “There’s an intimacy in a small space, and I wanted to keep as much connection between the primary spaces as possible,” says Ian.

Two lofts above the bedrooms make use of the roof space. One above the main bedroom looks down into the living area and is large enough to be a study, sewing room or kids’ sleeping space. The other projects over the kitchen, creating a lower ceiling height above the entrance. The curving wall adds a softer geometry to the space, and the rough-sawn timber cladding has tactility and contributes to the cabin feel. 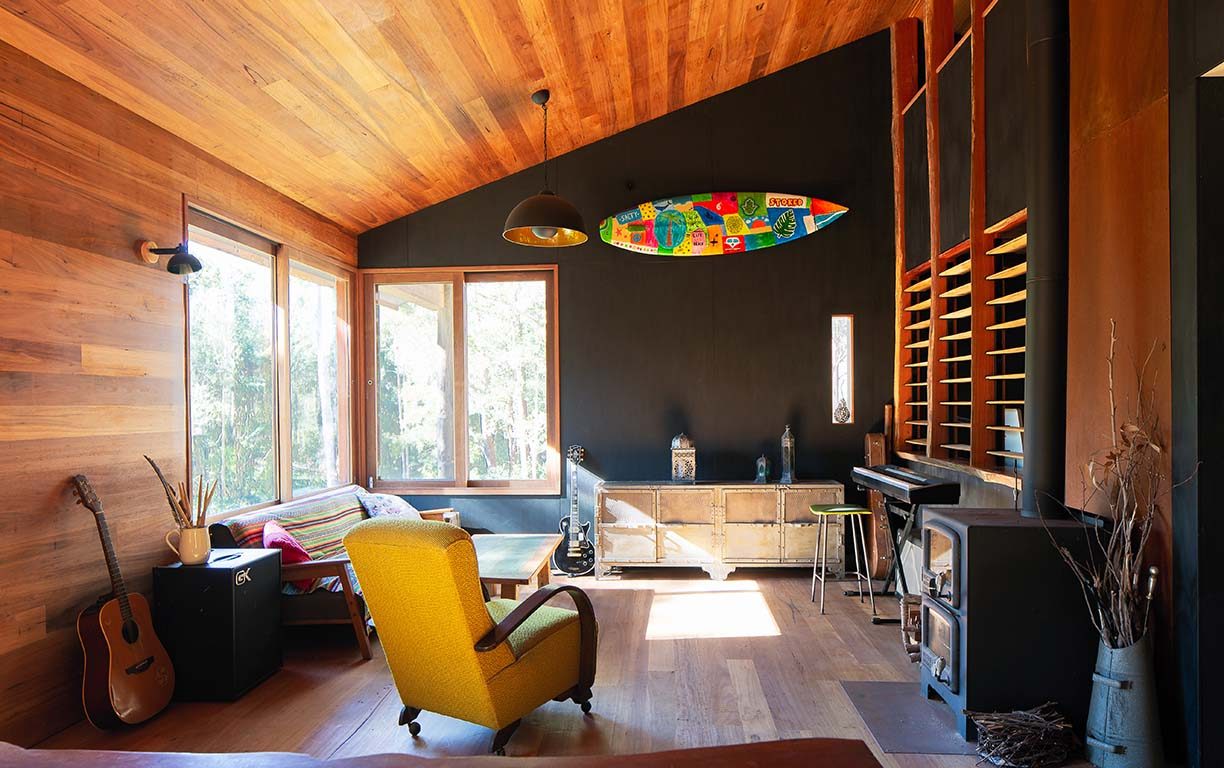 Louvres between the living room and the main bedroom open for light, breezes and views. Blackbutt floorboards were used on the floor, ceiling and side walls, and black-painted plywood on the end walls to help them visually recede.

Ian used reclaimed and recycled materials where possible, while still meeting the requirements of BAL29 bushfire zoning. Only three trees were cleared from the site for construction, two of them used as posts at the north-east and north-west corners. Ian sourced hardwood from nearby mills for the structure and cladding, using it vertically and horizontally across the facade. “A local mill had a stack of timber from a deal that fell through,” he explains. “They were unable to offload these particular lengths, so they sold it to me at a good rate and I designed the facade to suit.” 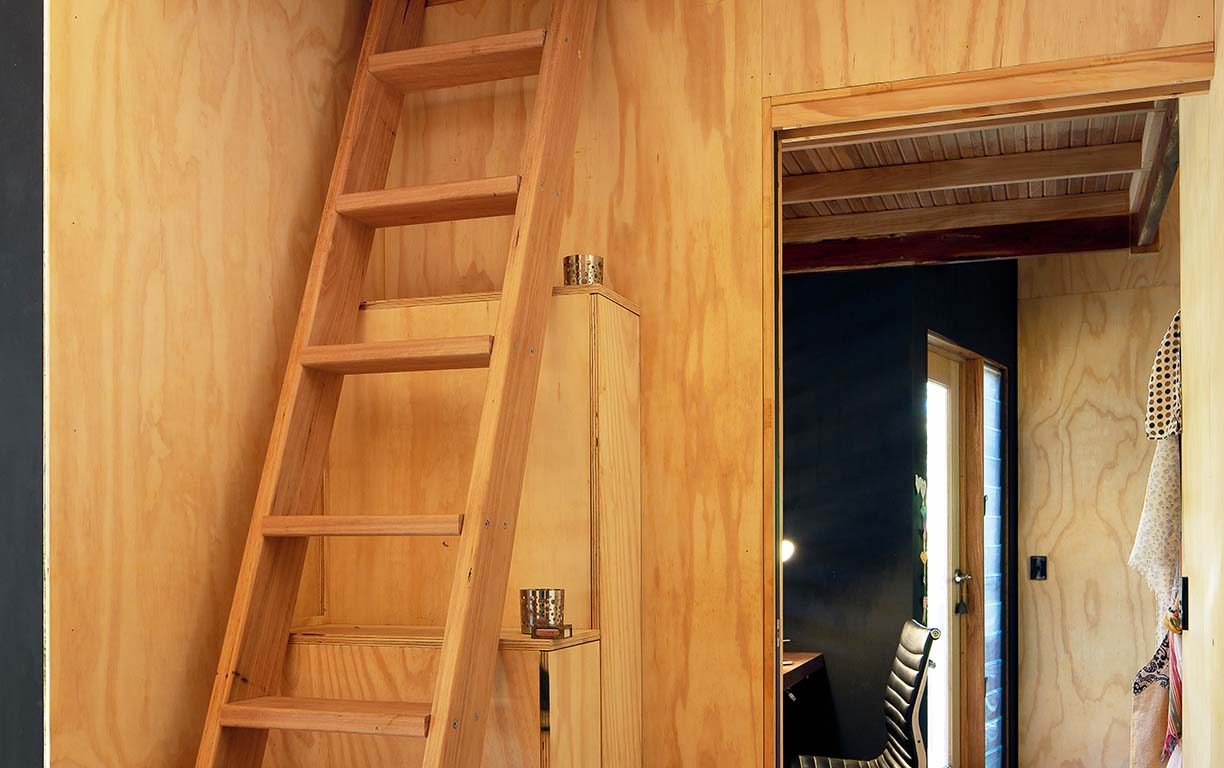 Storage is tucked under the stairs to the loft spaces.

The roof and southern elevation are dark grey steel. “It’s like the colour you see if you’re standing in the Australian bush and look amongst the trees,” says Ian. He used timber floorboards on the interior floor, ceiling and side walls, and black-painted plywood on the end and internal walls. The black finish helps these walls to visually recede, drawing the eye to the view, while still allowing the texture of the ply to be visible. The kitchen island with reclaimed timber benchtop doubles as the dining table; Ian found the pantry advertised on Gumtree; and an external fence is built partly with old snow skis.

These recycled and upcycled elements give The Shack its character, while timber, brick and dark steel embed it in the wooded landscape. “It fits the site and pushes small-house thinking,” says Ian. “It feels beautiful and, like a cabin, everything is within an arm’s reach.”