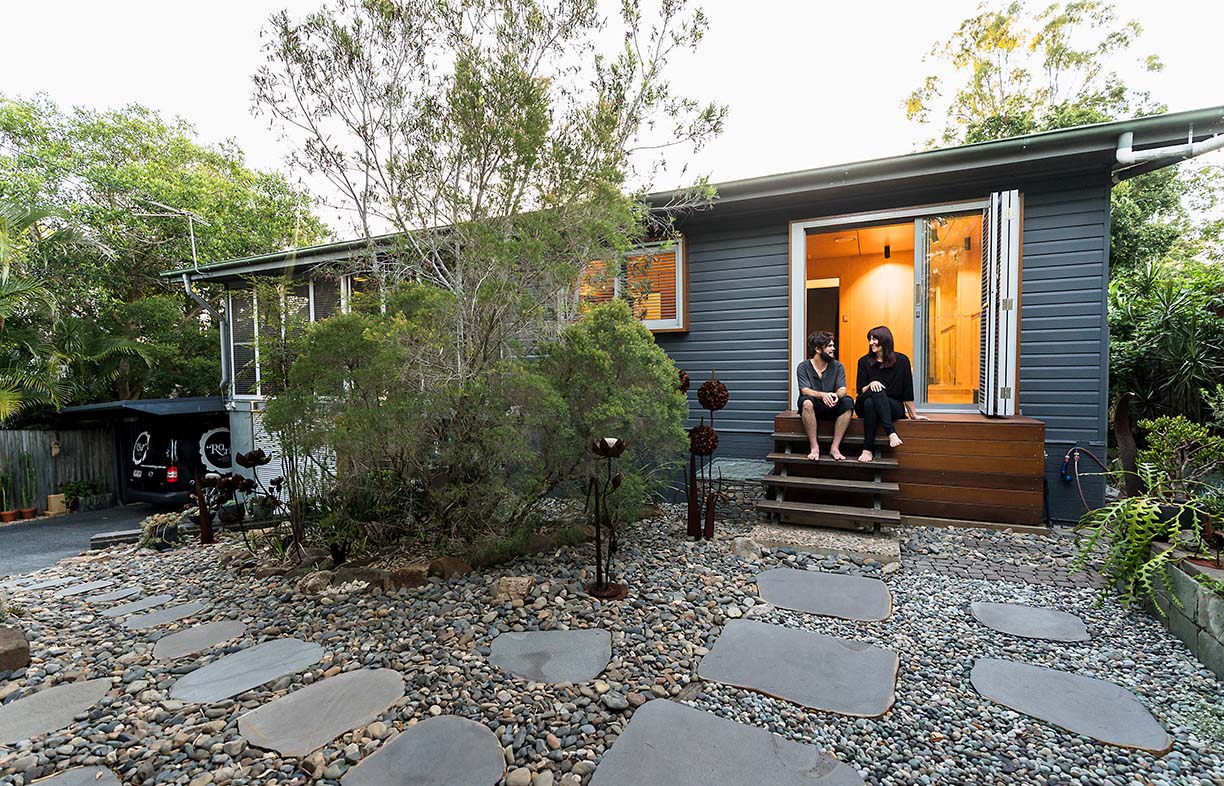 Although their priorities changed following a destructive storm, Sarah and Jason did still get a small deck as part of their renovations; it’s just 1.8 square metres, just right for perching on with a coffee.

Over several years, this Brisbane couple have renovated their home and ethical clothing studio to be space and resource efficient and able to weather Queensland’s storms.

In November 2008, a supercell cyclone hit Brisbane. The Gap was one of the worst hit suburbs; the housing stock wasn’t built for such intensity. Residents Sarah and Jason remember it vividly. They had to hold on to their windows to prevent them being sucked out, and “the rain was like being underwater,” they recall. The house sustained severe damage. The storm changed their desire to build a big deck to enjoy the view; instead, “being stormproof became our number one priority,” says Sarah.

Together, Sarah and Jason run an eco clothing business, Sustainable Fashion, and their business mantra of ‘ethical, natural, local’ was central to their brief for alterations to their living and working spaces. As their business has become more successful, they’ve chosen to fine-tune their existing two-storey 1960s timber house rather than occupy separate premises. They were keen to modify the existing fabric as little as possible, and chose to carry out the building works in nine stages over twelve years for financial sustainability and to avoid disruption to their business and home life. “We didn’t want to ever overcommit,” explains Jason. “We like to live in and feel the spaces before carrying out another stage.” 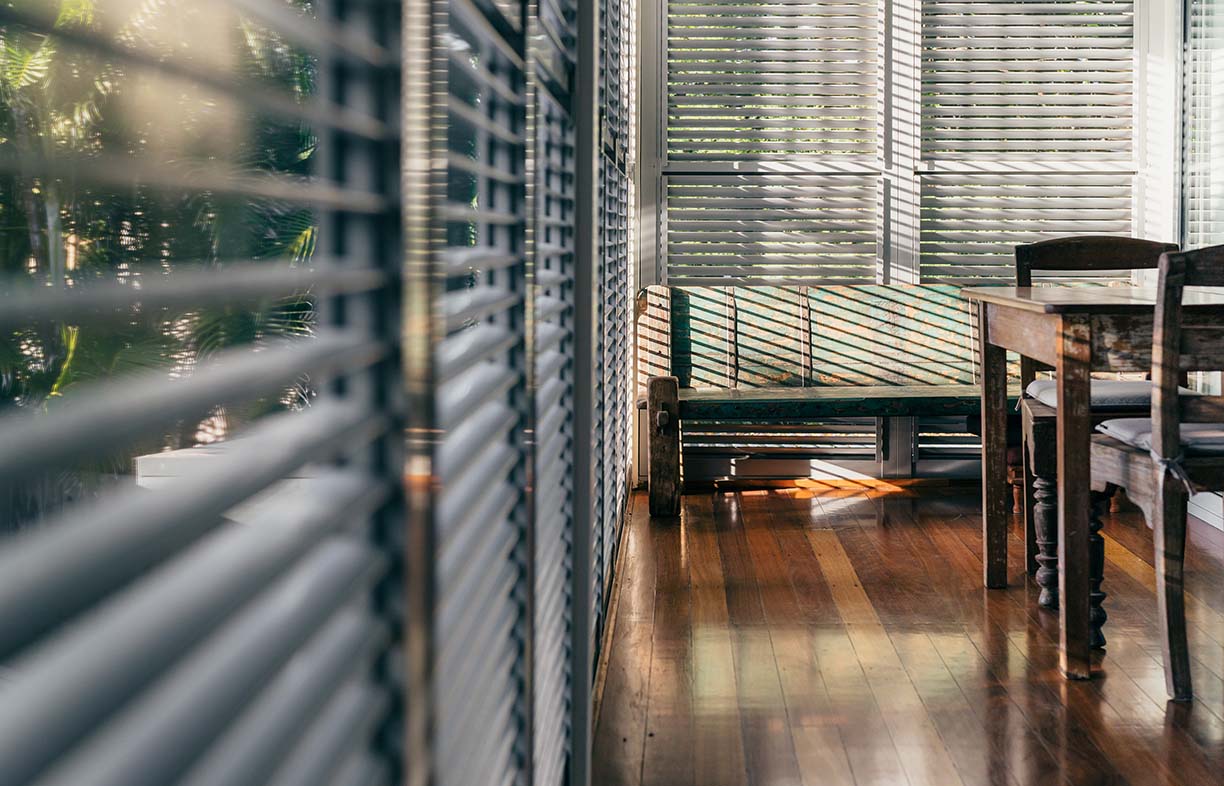 Enclosed with adjustable louvre shutters with integrated insect screens, the east-facing verandah on the upper level is an inviting place to sit.

The first of the alterations, guided by local architect Julie Borgelt, was the installation of Brisbane-made aluminium external shutters to protect 90 per cent of the windows and enclose the east-facing verandah. Complete with integrated insect screens, these shutters not only provide storm and bushfire protection but allow flexible control of sun, daylight, breezes and privacy through the day. “They make up to five degrees temperature difference,” says Sarah, and at night prevent wildlife and other intruders coming in while allowing the house to be left open to cooling breezes. With the increasing number of damaging Brisbane storms, these shutters have proved highly successful, durable and important for the continuation of the couple’s business.

The second year, existing windows in the bedrooms and stairwell were replaced with stormproof, fireproof and secure Jalousie louvres: “We love them because they seal so securely and operate so well,” says Jason. The major alterations took place the following year with the removal of dividing walls between the living spaces on the western half of the upper floor, allowing breezes and light to permeate across the full width of the house. This space, lined with plywood, recycled timber and locally crafted cabinetry and seating, was designed for flexibility of use, both home and business – family gatherings, work meetings and photo shoots. 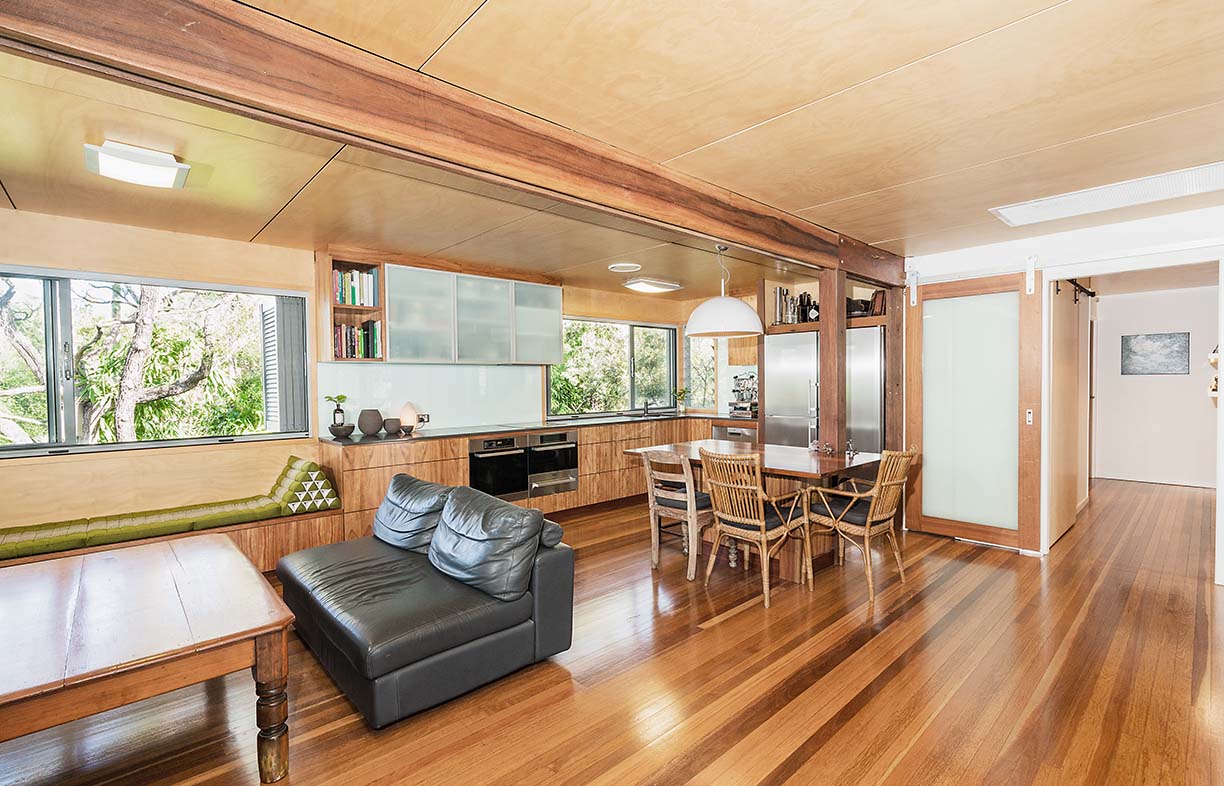 The next seven years involved a range of small projects that upgraded the carport and refurbished the downstairs office, including the addition of a curved double-height fabric storage room doubling as further weather protection to the south-western corner. The crumbling Decramastic (pressed metal with bitumen coating) roof was replaced with Zincalume fixed to cyclone standards; this provided an opportunity to add roof insulation and install solar PV and rainwater collection for the household and for pre-washing of Sustainable Fashion’s clothing range.

2019 saw the final significant stage of the renovation completed, with work on the three bedrooms. The original, modest sizes of these rooms were retained and some of their wall and ceiling linings were replaced with plywood, giving a warm, cocoon-like feel. The main bedroom was relocated to free up the largest room as a multi-use space for yoga and pilates, with wardrobes around the walls. A small raised deck, just big enough to settle comfortably on with a coffee, opens off this room and connects it with the eastern garden dotted with sculptures upcycled from scrap metal by Jason’s father. There is still only one bathroom and toilet upstairs – all that the family of three needs. By not adding ensuites, considerable savings were redirected to purchase quality, Australian-made fixtures and finishes and to engage local craftspeople to build beautiful details in recycled and sustainably-sourced timber.

Uneven and damaged plaster was covered with plywood lining in the living space and bedrooms. The existing ducted air conditioning system was retained. “Downstairs, we need air conditioning because we’re working and lugging lots of stuff around. With the ceiling fans, we don’t need to use it much upstairs, and never at night,” says Sarah.

Overall, little has changed in the footprint or layout of the original home, with only six square metres of storage and the tiny 1.8-square-metre deck added. By making minimal structural changes and reusing existing elements where possible, costs were kept in check. To reduce demolition costs, dust and disruptive timing, existing damaged and dinted wall and ceiling linings in the main living area were covered with ply panelling, and all new structure was exposed and expressed using recycled hardwood.

Connection with the garden is also important to the family, and enhances the sense of living space; Sarah’s fabric designs have been inspired by its plants and trees. 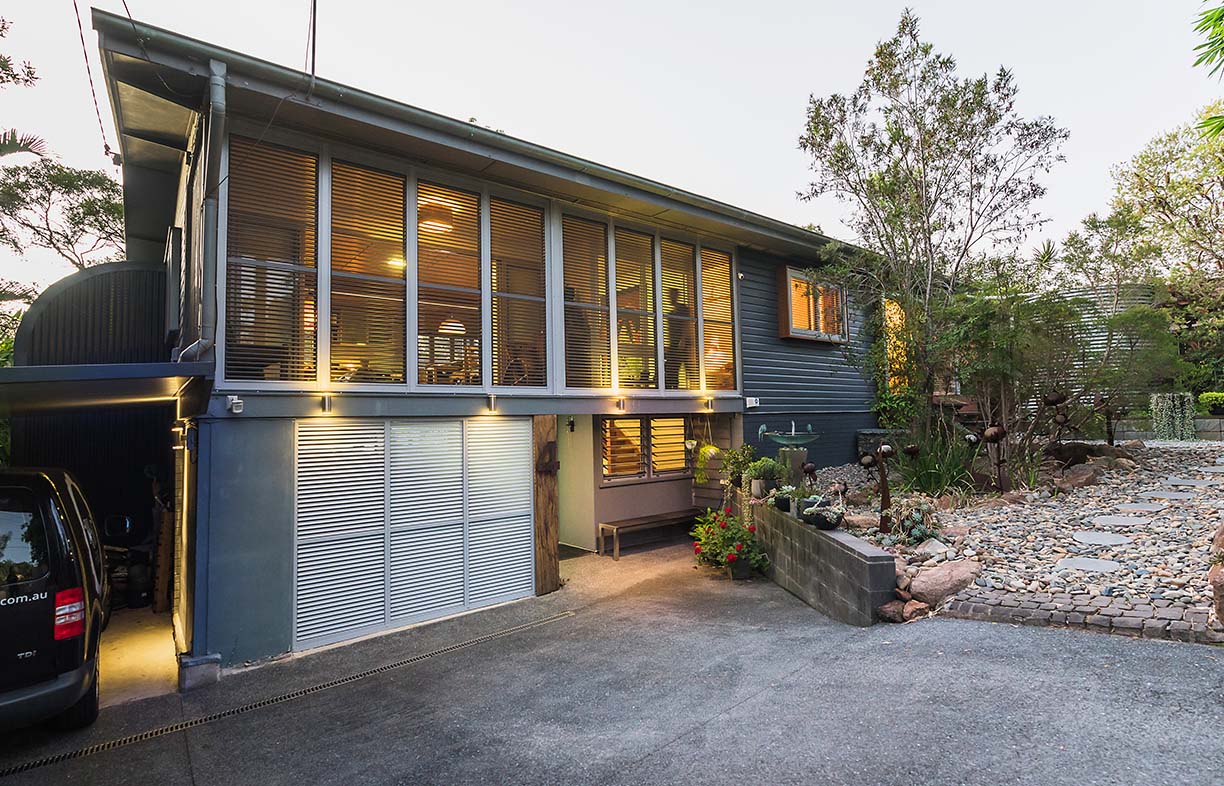 Aluminium bifold louvre shutters are a key part of the strategy to make the building more resilient to storms. The staged renovation involved only a minimal increase to the home's original footprint, a two-storey curved storage space for fabric rolls behind the carport that also provides extra protection on the side of the house facing prevailing storms.

Sarah started her first sustainable fashion business, Rant Clothing, at home in 2003 when her son started school, encouraged by Jason. Seventeen years on, the greatest sustainability benefits they see in their living and working arrangement are the sharing of resources (kitchen, laundry, solar power and rainwater storage) and the removal of the expense and time of commuting from their days. A single door successfully provides physical and visual separation between work and home life. The couple see only positives in working from home and now that Sarah’s son Dakotah is an adult, he has joined the team.

Jason, Sarah and Dakotah are now secure in their future-proofed home. These days during storms they can manipulate the outer shell to suit the intensity, and in milder weather the louvres help manage the internal temperature. “It feels like an armadillo,” says Sarah. Along with other upgrades, they have created a home studio which is exemplary in modest, holistic and sustainable design. Just like their clothing.