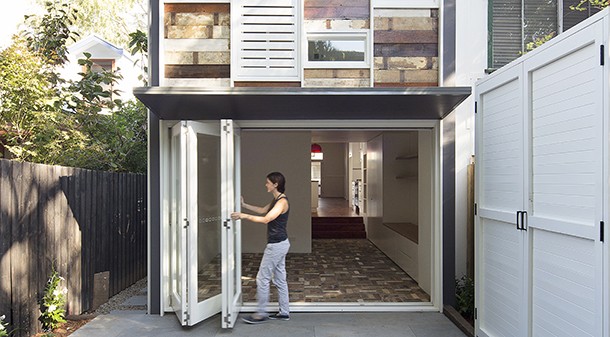 Salvaged bricks and floorboards from the original house are embraced as features in the addition. The bricks were hand-cleaned and used for the living room floor; the mixed-species floorboards contrast beautifully with the custom windows and shutters. 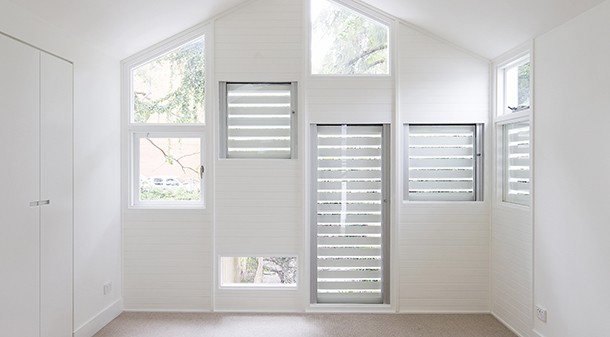 The shutters on these east-facing windows prevent summer overheating of the bedroom, but are easily opened from the inside to allow in winter sunlight. 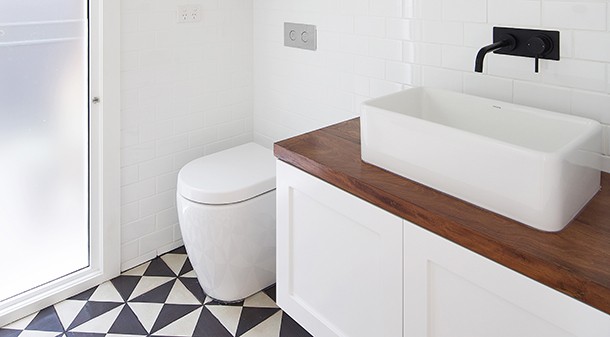 Natural light is brought into the first floor bathroom using skylights and an opaque window, which draws daylight from the hallway. 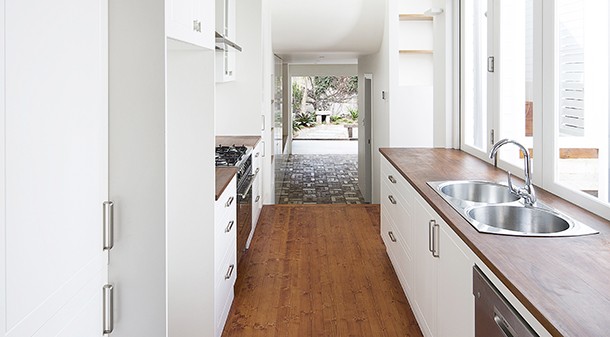 The galley kitchen opens up to the split-level addition with a striking curved ceiling, a feature the owners appreciate: "I love the curve ... the way it catches your eye and draws you toward the back of the house." 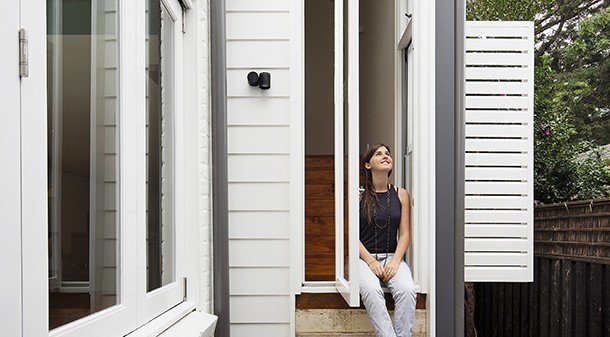 Simple but effective, this pivoting window is used to create a new space. It also channels cooling breezes from the south west and allows natural light into the stairwell.
< 1 / 5 >

A Sydney semi is renovated using a palette of sustainably sourced materials and bricks and timber salvaged from the original house.

When Paul Sheridan and partner Kate chose to expand their semi-detached house in Sydney’s inner west, their number one priority was to make the process and the outcome as sustainable as possible. They worked with architect Nick Bell – a long time friend and designer of their previous renovation, a new kitchen and adjacent outdoor deck – to determine the best way to achieve those goals.

“These clients are very ‘green’,” Nick Bell says. “Both of them are heavily involved in environmental issues in their jobs, so those concerns were a key part of the brief. Initially, it was not so much about energy or water conservation, but we started from first principles of trying to minimise the amount of materials we took off the site, not just to save money but to avoid throwing stuff in the bin.”

From the outset, the team agreed to collect and reuse as much of the original building fabric as possible – bricks, sandstone and timber – as they prepared to knock down the rear room that blocked access to the backyard. The decision to leave the recently installed galley kitchen in situ and arrange the new rooms around it was another tick on the couple’s mantra of ‘reduce, reuse, recycle’, although doing so added to the complexity of the process, as did an unanticipated move interstate.

“The back of the house was always problematic – it was pokey and dark,” Paul explains. “Also, the site was long and narrow with a two-metre wide pathway on one side that wasn’t being utilised. The second bedroom was just over two metres wide and it hadn’t been touched since the 1880s when the house was built.

“We saw this renovation as a good way to address those issues, and a good opportunity to capitalise on increasing property values, but just as we signed the contract, Kate got a new job and we moved to Melbourne.”

Undaunted, the couple pushed onwards with their plans which involved converting the former second bedroom into a flexible living space – a study or library, which opens to the newly landscaped back garden – and the addition of a new bedroom and ensuite above.
In a rather unconventional design move, this bedroom is accessed via a second staircase, so that the house now resembles a pair of two-storey pavilions arranged around a central social hub. Nick says that while the two-staircase plan doesn’t necessarily suit traditional family setups, it’s perfect for these owners, and, as it turns out, their tenants.

“Our tenants referred to the unusual plan as being like a pair of self-contained units that share a kitchen,” Paul adds, “and we are looking forward to returning home to Sydney in the future, and welcoming friends and family to stay.”

Rather than looking new and out of place, the rear pavilion blends in well thanks to its armour of recycled materials – bricks that the owners and extended family cleaned by hand one weekend, and timber that was repurposed for cladding. The upper bedroom is framed with shutters, windows and fixed walls that maintain privacy while offering views, cross ventilation and access to winter sun.

During the renovation, the owners also replaced the 70-year-old tiled roof with a new corrugated steel version, and installed insulation in all of the walls, roof and sub-floor, where previously there had been none. Going back to basics means the indoor temperature is stable and comfortable for most of the year, Paul says.

In another slightly unusual move, given Sydney’s sub-tropical climate, there is no mechanical heating or ventilation at all, apart from ceiling fans that work in concert with a large remote-controlled skylight over the double-height central void. The skylight acts as a vertical heat chimney in summer, promoting good airflow from the older section at the front to the new addition at the rear.

Getting all of these strategies to work together on a tight inner urban site posed numerous design challenges, but by far the most problematic was the need to store recycled building materials, and have new materials delivered. The site doesn’t offer rear lane access, and the builders also needed sufficient space to work outside. As a result, sequencing and project management required more careful oversight than a regular build, so Nick spent additional time on site, and the builder adopted the ‘just-in-time’ delivery method from the automotive manufacturing industry.

Having run some figures to determine whether the recycling of materials impacted on the bottom line, Nick concluded that the process of collecting, cleaning, storing and reusing materials was cost-neutral, but he says it was worth the effort for two reasons: firstly it limited the amount of waste that was sent to landfill, and secondly, the materials impart a sense of character to the new addition.

“I love the way the old timber floor boards came up in the cladding,” Nick says. “The natural colour variations that we achieved were carefully composed: you could never create the same effect if you weren’t using recycled materials. It would look contrived and terrible.”

For Paul, who spent a few weeks living in the house at the end of the project before joining his wife in their new home, the renovation is full of unexpected delights. “We thought the house had a lot of natural light before, but it’s even better now. But mostly I’ve been surprised by how much more space we have,” he says. “The house feels longer and has hidden dimensions to it that I just didn’t expect.”

In short, this project surpassed the couple’s expectations of what they might be able to achieve in a renovation: the house is now spacious without being ostentatious; it offers year-round comfort but uses very little energy; and their efforts to reuse materials paid off handsomely, to reduce construction waste and the need for new building products.