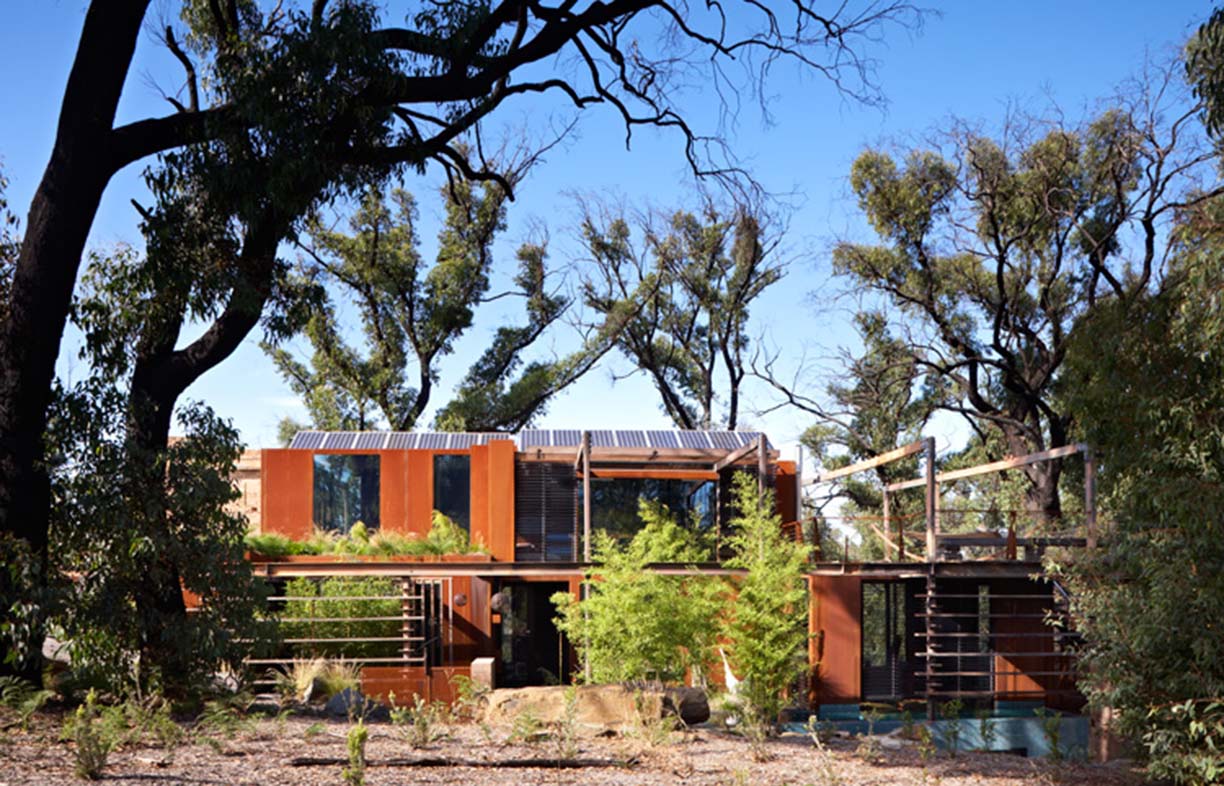 Around 130 tonnes of rock from the local quarry were used in the landscaping of  the home to provide an alternative to timber decks (which can be burnt).

It’s an old cliché to describe life regenerated out of shattered dreams as a “phoenix rising from ashes”. Yet for Chris Clarke the phrase has a starkly literal meaning. From the remains of twisted metal, glass and concrete that was once his home has come an inspiring symbol of regrowth after the devastation of bushfire.

Chris, a designer and builder, had stewed for 10 years on the concept for his original house, carefully choosing a five-acre site in Callignee in Victoria’s east that to him was “heaven”. It was an untouched elevated plot amid eucalypts in a quiet valley. The idea was for a striking, three-bedroom house of mainly timber and glass that payed homage to its idyllic surrounds. It took two years to build. Six days after it was finished in February 2009, the Black Saturday bushfires swept through the area, leaving the home a mess of rubble. 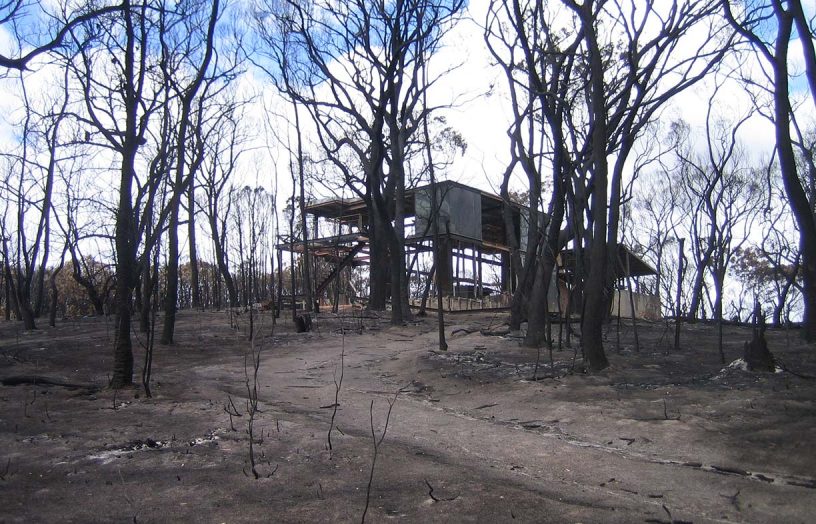 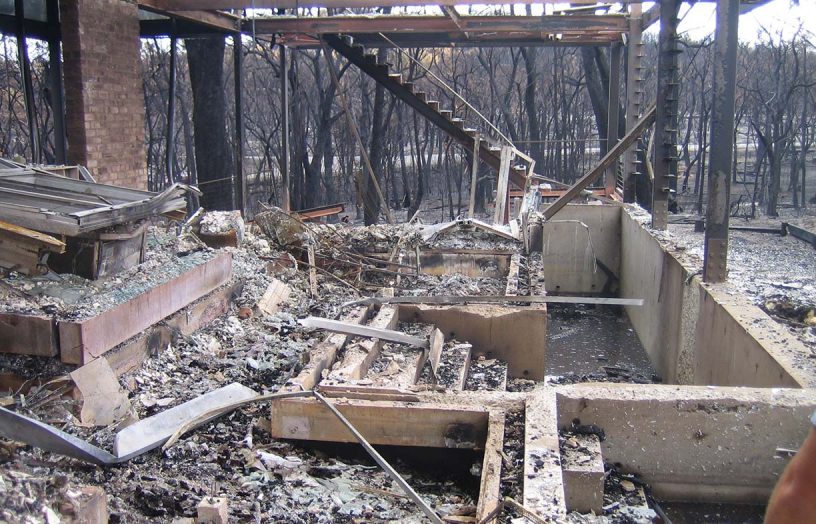 Thankfully he was not there. All that was left of Callignee 1, which is what he now calls this original home, was a brick wall, concrete slab, steel frame, some panes of glass and a jumble of timber, concrete and steel. Yet somehow the wreck inspired Chris to rebuild with new vigour. “The steel frame stood there in its glory. It just stood there in that strength, and I wanted to work with that,” he says.

As well as the pressing need to construct a fire-proof home in an area of extreme risk, Chris was determined to make sustainability and non-toxicity key drivers in the design of this new home. After nine months of building and an expenditure of $450,000 the result is Callignee 2, a dramatic and highly conceptual statement in weathered, rusty hues that blends with the resilient and regrowing landscape. Its compelling story made it the first house profiled in Grand Designs Australia on the Lifestyle Channel.

Callignee 2 is a two-storey construction, but a scaled-down version of the original with only one main bedroom. Its bronzed look is the result of Cor-Ten weathering steel which clads the house inside and out. Locally quarried rocks, grass trees and black bamboo line the path to the front door. Unusually, the front door opens into the master bedroom but separated by a Japanese screen. The old office became the new bedroom. There is an ensuite with stone basin and shower surrounded with glass, including louvres to let steam out. 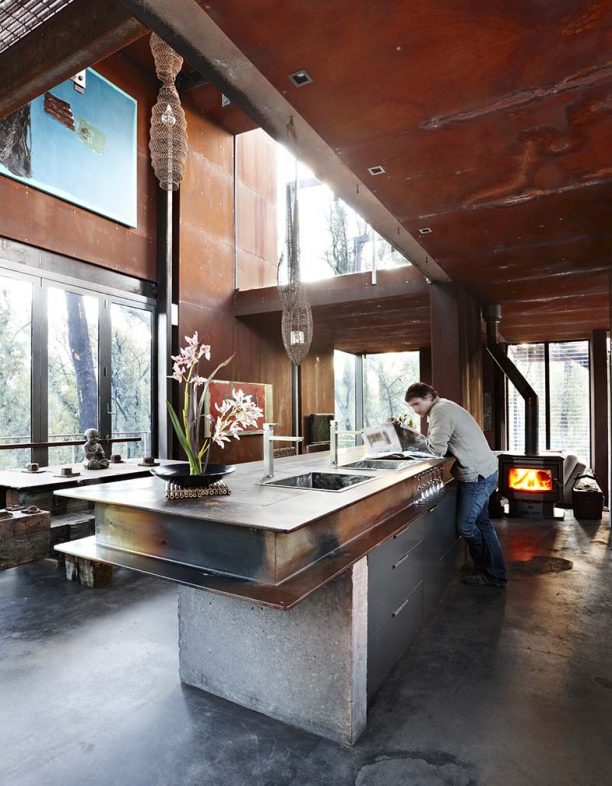 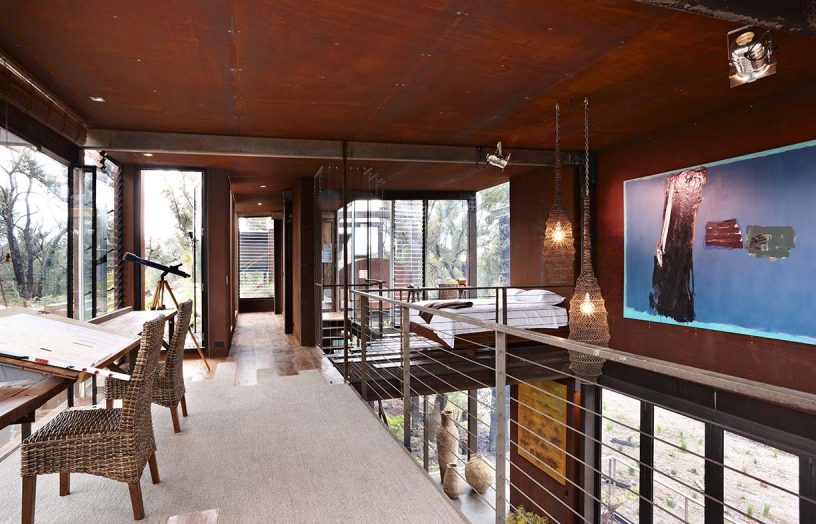 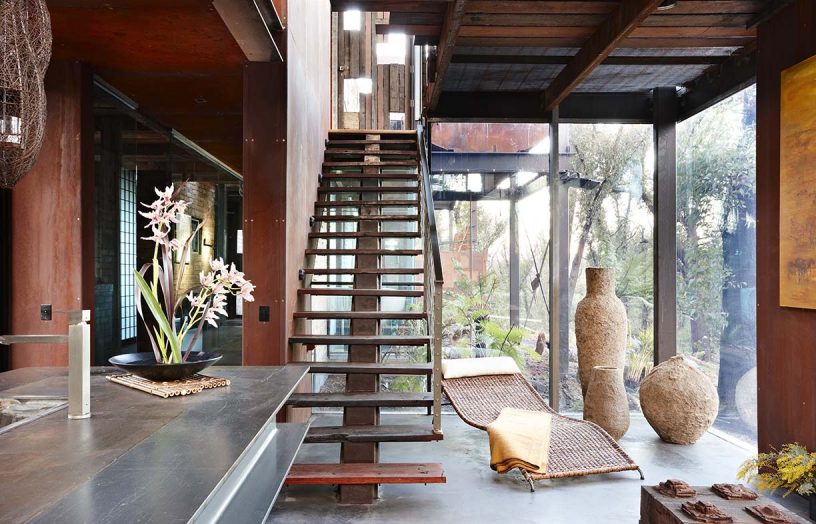 Image 1: As well as the pressing need  to construct a fire-proof home in an area of extreme risk, Chris was determined to make sustainability and non-toxicity key drivers in the design of this new home. Image 2: The mezzanine bedroom and study with Sisal flooring and Princes Pier brushbox timbers throughout. Chris wanted to keep the house “free and open” so the upstairs bedroom is open plan with metal grate flooring to see through to the room below. Internal blinds shade the northern glazing over the study. Image 3: The stairs from the original home survived the devastating fires of February 2009, with only the bottom and top treads needing replacement.

The passage leads to a large kitchen space (“the heart of the house”, as Chris describes it) with concrete and steel island bench, dining area and window opening out to a lap pool. At the end of the kitchen there is a free-standing fireplace. Polished, hydronically heated concrete floors lead down to a living area framed by a large glass panel that forms one side of the pool. Timber stairs lead to a loft bedroom on see-through mesh floor and north-facing study with Sisal carpet. Much of the roof space is devoted to gardens of grass trees and native grasses.

Chris has tried to keep the embodied energy of Callignee 2 low, re-using and recycling as much from the first house as he could. The kitchen bench and stairs, two of the features from Callignee 1, still bear the marks of the searing fire. Double-glazed glass panels from the original home are reborn in the new. Reinforcing the home’s image of durability, cast-off eucalypt hardwood from Melbourne’s Princes Pier forms the ceiling of the master bedroom, the dining table, bathroom vanity unit and some of the flooring.

One of the novel aspects of Callignee 2 is the abandonment of many of the most conventional aspects of modern homes. There is no trace of plasterboard, no architraves or skirting, and no tiles. “I wanted smooth, clean lines,” Chris says. But perhaps the most important absentees are the ones that make many houses toxic – no VOCs (volatile organic compounds) were used in the joinery, and the house is free of paint. 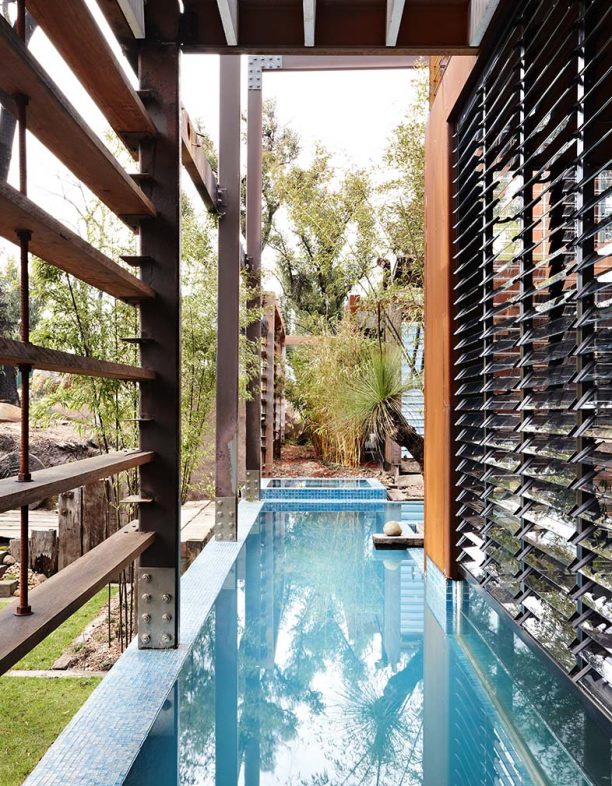 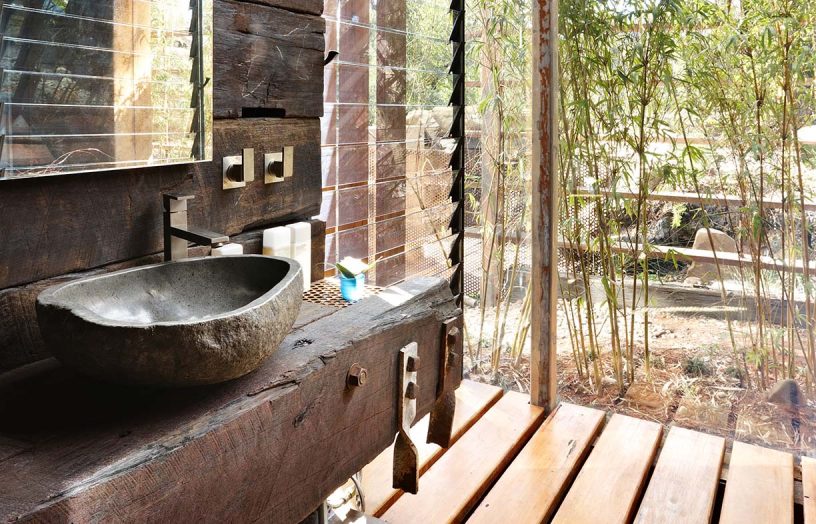 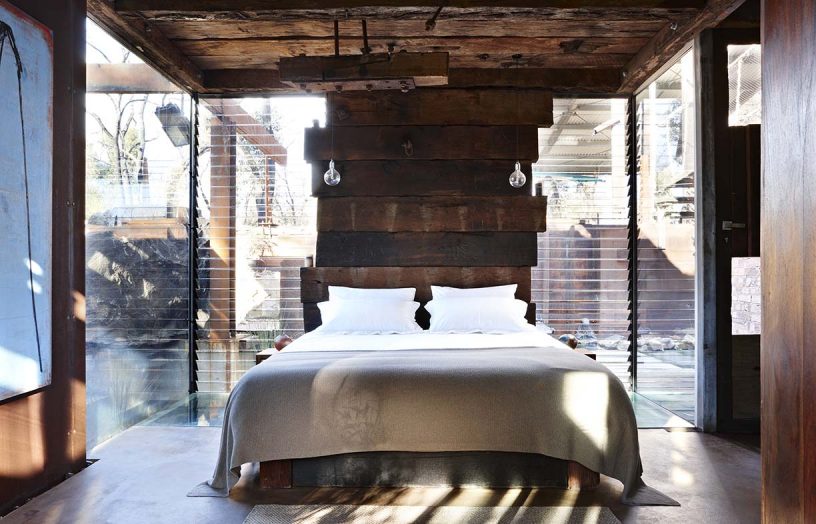 Image 1: Chris opted for a mineral swimming pool over salt or chlorination. Water from the pool can be used on the garden and the magnesium and potassium are said to help reduce stress, aches and pains. Image 2: The framing from this shower was Chris’ “suspended shower” in the original Callignee 1. Here it is reconfigured to jut out from the northern facade of the home. The boards lining the floor hide a bath, so you can take them all out to enter the bath, or leave a number in the middle as a bath “table”. Image 3: The master bedroom with reclaimed wharf timbers making up the bed head and the ceiling of the bedroom. This is a home with no tiling, plasterboard, skirting boards or paints – the ultimate in durability and low maintenance.

Chris had suffered chronic fatigue for six years, a condition brought on by travelling in remote South America and not helped by a hectic, corporate-driven lifestyle. Non-toxicity became a pillar of his recovery process after spending time at a health centre in Mexico.

Sean Hamilton, a designer who collaborated on the project, describes it as a “very special home”. Sean says it was profoundly important for Chris’s healing process to rebuild: “The home has a bush casual ambiance, comfortable in its new skin – a skin with soul and a very real heritage now.”

Concrete water tanks on site have a capacity of 80,000 litres. In further keeping with the philosophy of sustainability, the waste from the house goes into a blackwater system sunk into the earth.

Remarkably after the destruction of Black Saturday, Chris has no fear about future bushfires. The house’s frame is covered with Firefly, a fire-proof material designed to withstand extreme conditions. He is confident Callignee 2 will not suffer the fate of its predecessor, despite the home being in Flame Zone (BAL-FZ), the highest category on the Victorian Bushfire Attack Level of risk.

“There’s nothing here to burn,” he says, referring to the prominence of Cor-Ten steel and glass.

[Ed note, as noted this house falls into the BAL-FZ category, the highest bushfire attack level under the Australian Standard for building in bushfire-prone areas. If you are looking to build on a rural property your home must be assessed to find out its BAL rating and you must ensure the materials and construction methods used meet the BAL level of your site. Contact your local council and the Building Commission (www.buildingcommission.com.au) for more information.]

Designer
Chris Clarke & Sean Hamilton
Location
Callignee, VIC
Size
House 170m2, land 5 acres
Water saving
80,000L rainwater storage in tank on roof
Windows & glazing
Sunergy louvre windows with ironbark frames throughout
Fire protection
Passive fire protection lining in the roof by TBA Textiles Firefly. Firefly Plus 60 is a 10mm thick glass based composite fire barrier material that can be used in vertical or horizontal installation. It has been tested to provide at least 60 minutes of integrity and 30 minutes of insulation. 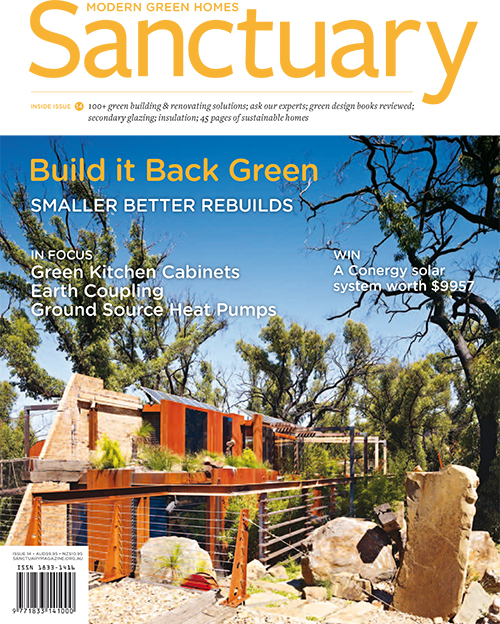