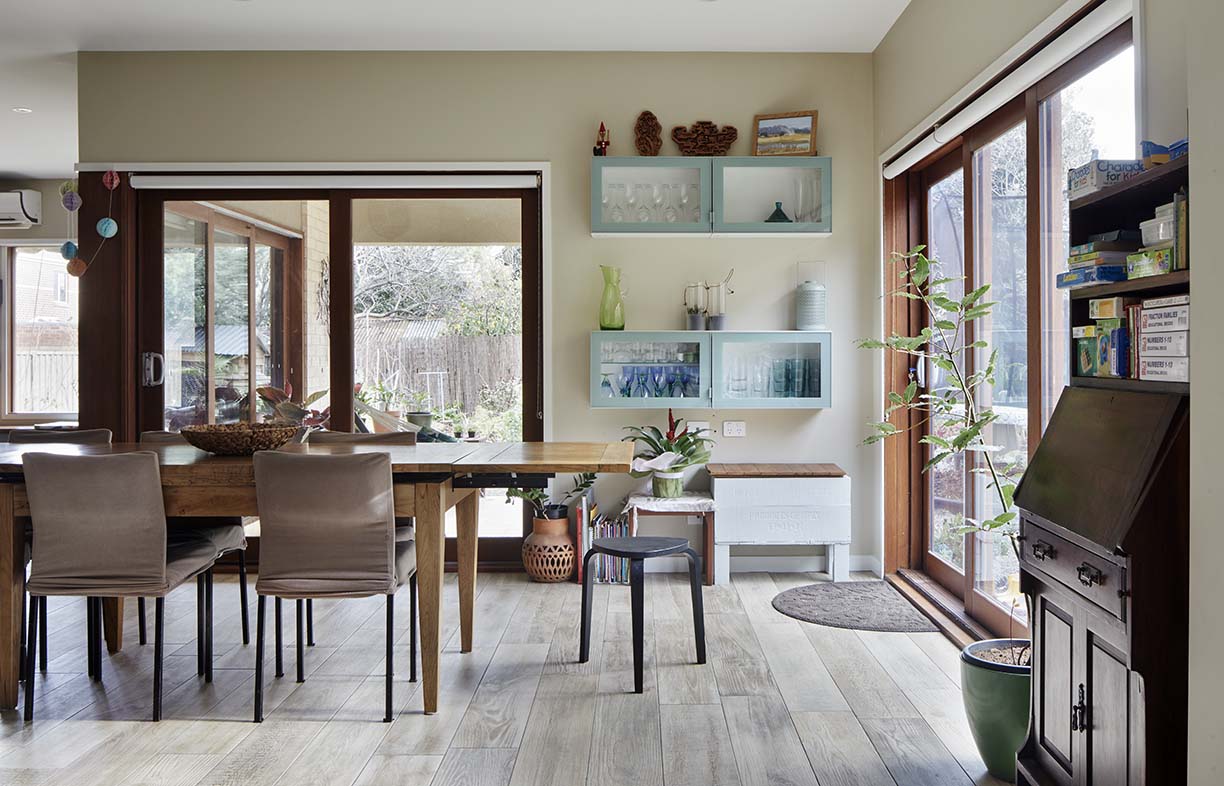 The house was situated close to the southern boundary to create a side garden on the north and to maximise passive solar gain. The couple specified 40 per cent fly ash for the concrete slab to reduce the new cement required, and the porcelain tiles used for the flooring downstairs also contain 40 per cent recycled material.

This Melbourne couple worked with their volume builder to improve the sustainability of their standard project home, achieving an energy-efficient and spacious 7.5-Star family home.

Rebecca Nelson and Richard Smith were intending to renovate and extend their 1920s Californian bungalow in the Melbourne suburb of Moonee Ponds, but took a different path when costings to update the home came in higher than building from scratch. “We were surprised by the cost to renovate: double the price per square metre compared to building a new home,” says Rebecca. “It wouldn’t have given us the outcome we were after either, as the original house was in the wrong spot on the block and had poor solar access.”

They talked to several architects about building a new home instead, including Passive House designers, but the prices quoted were out of their reach. They eventually settled on a project home, with a commitment to ensuring it was as energy-efficient and sustainable as possible.

Commonly the domain of volume builders, project homes are generally cheaper per square metre than a more bespoke home build due to economies of scale when it comes to design and materials. After considerable research, the couple chose Henley for their build as the company was happy to accommodate changes to the home’s standard specifications, and importantly, could also offer in-house sustainability expertise and advice.

This appealed to Rebecca, who is accustomed to seeking better environmental outcomes in her job as an environmental lawyer. She took the opportunity to work with Henley to improve the home. “While we would have liked a one-off design, the aesthetics were not as important as the function and performance of the house,” she says. 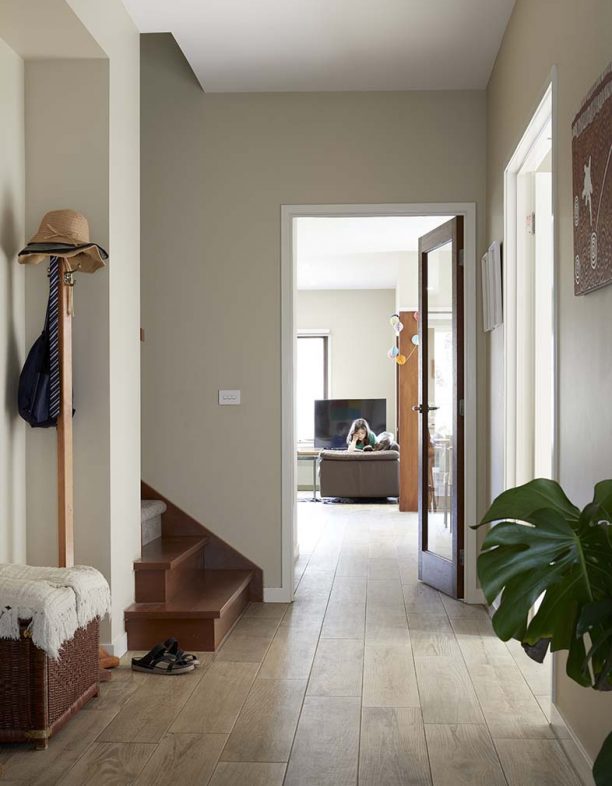 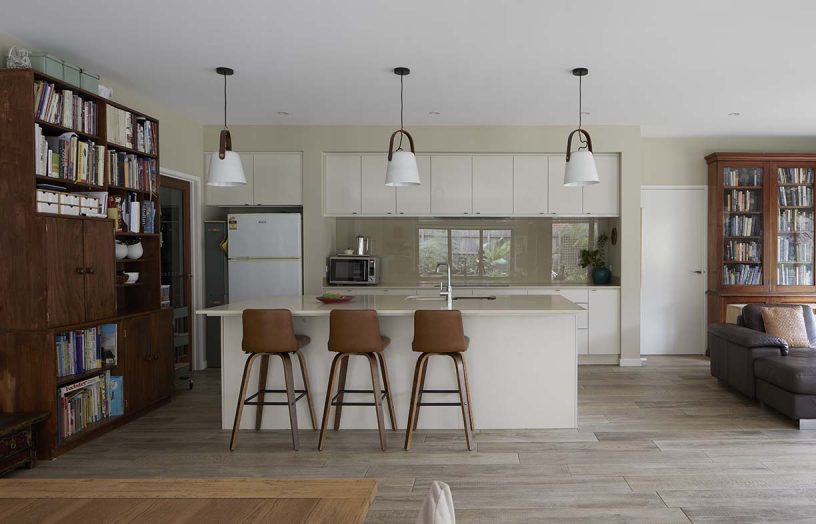 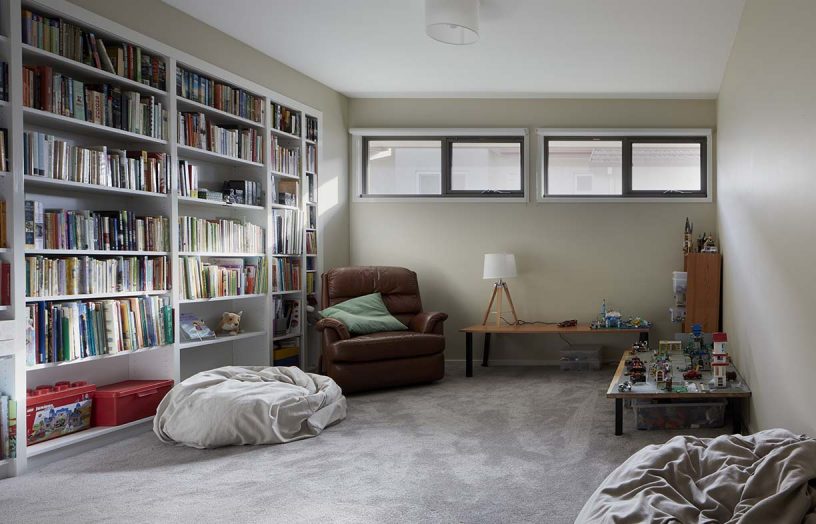 Left: Rebecca and Richard added internal doors to help with zoning the house for heating and cooling. Top right: The house is all-electric, with induction for cooking.

The house also needed to accommodate multi-generational living, with space for the couple’s parents if they require care later in life or for their three children to return and live with their own future families. “I have Italian heritage – family life is important to us,” explains Rebecca. “We lived with our parents when we started a family.” For this reason, the house has five bedrooms and a study (Rebecca works from home) and is considerably larger than most homes that appear in Sanctuary, at 340 square metres over two levels. However, the 233-square-metre footprint is intentionally a similar size to the original home, to maximise garden space on the 703-square-metre block. “We thought long and hard about the size,” says Rebecca. “We really wanted environmental sustainability, but we also wanted a home that would work for us and last us a long time into the future – that’s also part of a sustainable solution.” The house sits on the southern boundary to allow for a side yard and to maximise northern light into the home.

Starting with the Henley design most suited to their block and their needs, Rebecca and Richard evaluated what was worthwhile in the design and what they wanted to change, where it was possible. “We didn’t place value on walk-in robes or ensuites – we generally got rid of them to enable more space in the bedrooms – and we went with a smaller garage,” says Rebecca. They added “lots of doors” to zone the home for heating and cooling, took out a west-facing window to reduce heat gain in summer and modified window sizes to improve energy efficiency (double-glazed windows are already standard on Henley’s homes). They also moved the laundry to the southern side, rather than taking up precious real estate on the sunny northern side, and increased its size to provide an indoor drying space instead of purchasing an electric dryer. 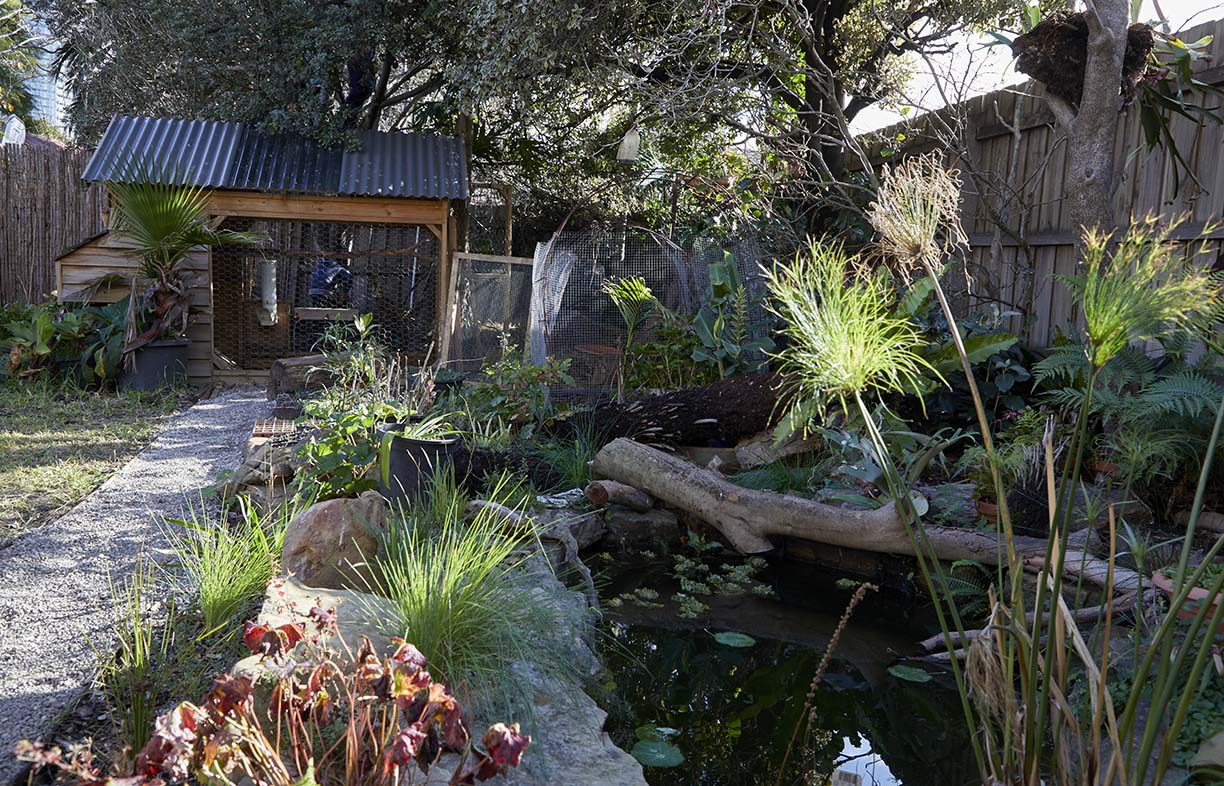 The family's beloved garden includes vegetable beds, a chook house and a large fishpond that's fed by rainfall from part of the roof.

“We thought hard about what we could do to maximise the sustainability of the home,” Rebecca says. “The advice from Henley’s sustainability manager Adam Selvay was key to every decision.” In particular, Adam ensured close attention was paid to the airtightness of the home, with a vapour-permeable membrane and careful taping around windows and doors. Rebecca says that Henley “backed themselves” and a blower door test when the house was complete came in at 3.66 air changes per hour at 50 pascals (ACH50), higher than the Passive House requirement of 0.6 ACH50 but a vast improvement on the Australian average for new houses of around 15 ACH50.

Overall the house has a 7.5-Star NatHERS rating, and Rebecca says it would have been even better but for the height of a neighbouring house to the north. “The good airtightness raises the performance of the house beyond that rating anyway. We’ve never experienced it being colder than 16 degrees inside in winter and in summer it’s rarely beyond the high twenties, with only sparing use of heating and cooling.”

Along with design changes, Rebecca and Richard made some changes to selected materials, such as adding 40 per cent fly ash (an industrial waste product) to the slab to reduce the amount of new cement required. Not everything was a win in the modification process though; some things were too difficult to accommodate within the builder’s standard construction processes. For example, switching from brick veneer construction to more thermally efficient reverse brick veneer was ruled out, and they were unable to opt for a polished finish to the concrete slab. Instead, they chose porcelain tiles with 40 per cent recycled content for the downstairs floors. They also “crammed as much insulation in as the structure would allow”, according to Rebecca, including R6 in the ceiling, R2.5 in the external walls and R1.5 in the internal walls to help retain heated or cooled air in the zoned areas. 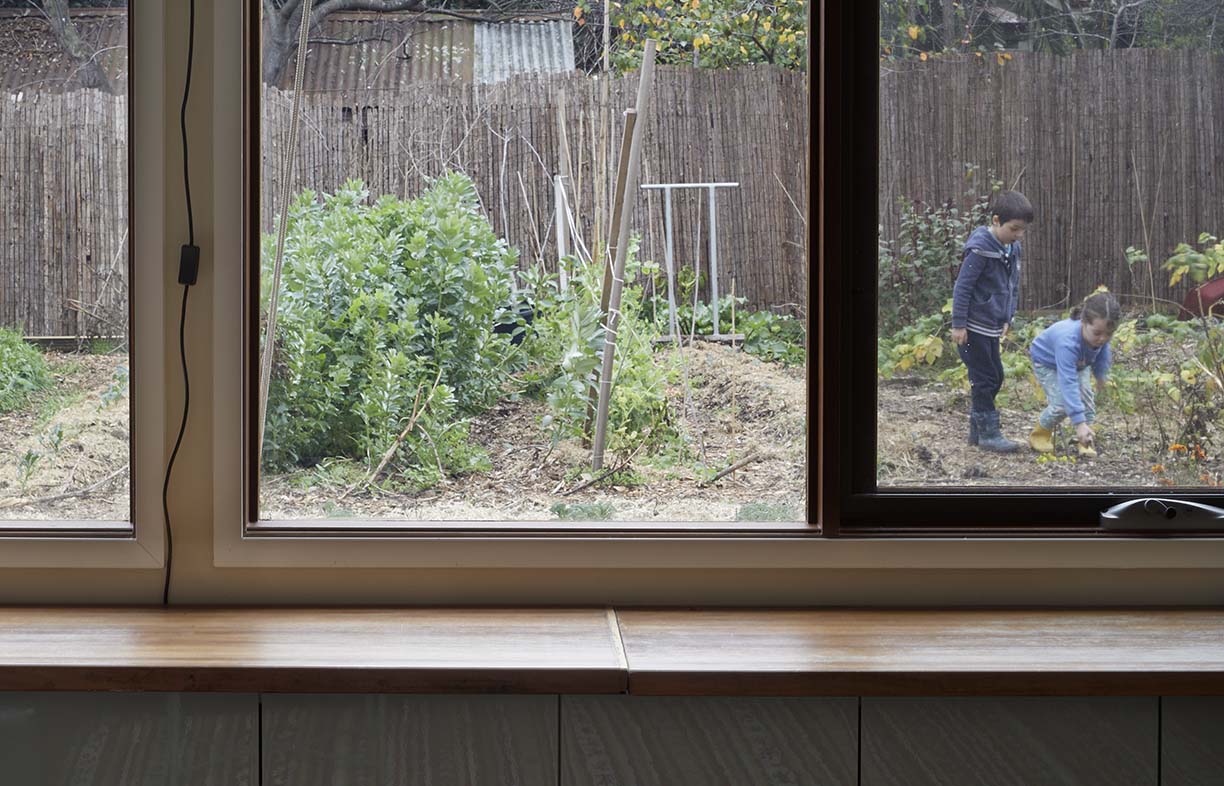 The kitchen bench from the original house was kept and repurposed as a window seat in the new living room.

The home’s rainwater catchment system has been designed to retain as much rainwater onsite as possible. A 5000-litre tank collects water from part of the roof and is plumbed to the toilets, and the rest of the roof drains to a large garden fishpond or directly to irrigate the garden. Plumbing is already in place for a future greywater system. The garden features a vegetable garden and indigenous plants.

Rebecca kept a spreadsheet throughout the design and build process and calculates that the sustainability features, including the 5.13-kilowatt solar system and Tesla Powerwall 2 battery, added 16 per cent to the cost of the home; many of the changes to standard specifications incurred no extra cost at all. Altogether, the family’s new home and landscaping came to $550,000.

The home’s total electricity consumption (from all sources: grid, direct solar use and battery storage) is around 15 kilowatt-hours a day, which Rebecca says is much less than that of friends and family with similar-sized houses; the figure is even more impressive given that the house is all-electric whereas other similar homes often use gas for heating and hot water. “Having the solar system and battery has led to significant change in how we use electricity. We use the app to check how much of our own electricity we are using, and how much is coming from the grid. We spent a crazy amount of time researching the heating and cooling system, so I think that’s made a difference to energy use as well.”

Overall, Rebecca and Richard are delighted with the house and with the experiment of building a more sustainable project home. For others interested in taking this route, the couple recommend choosing a volume builder carefully, ensuring that they are on board with your sustainability goals. Read more on how to do this in our article on page 62. 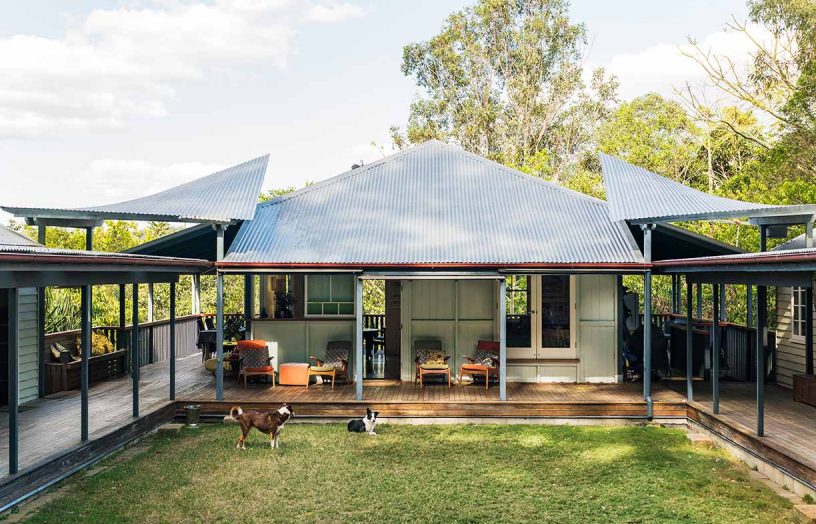 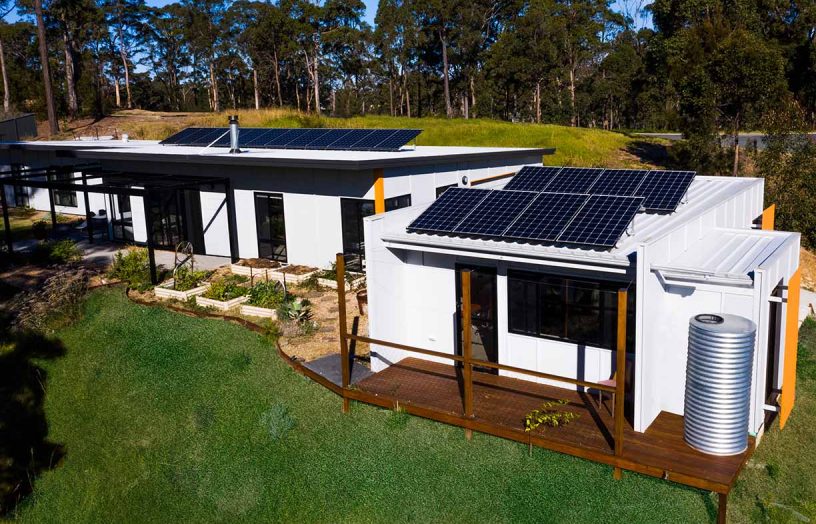