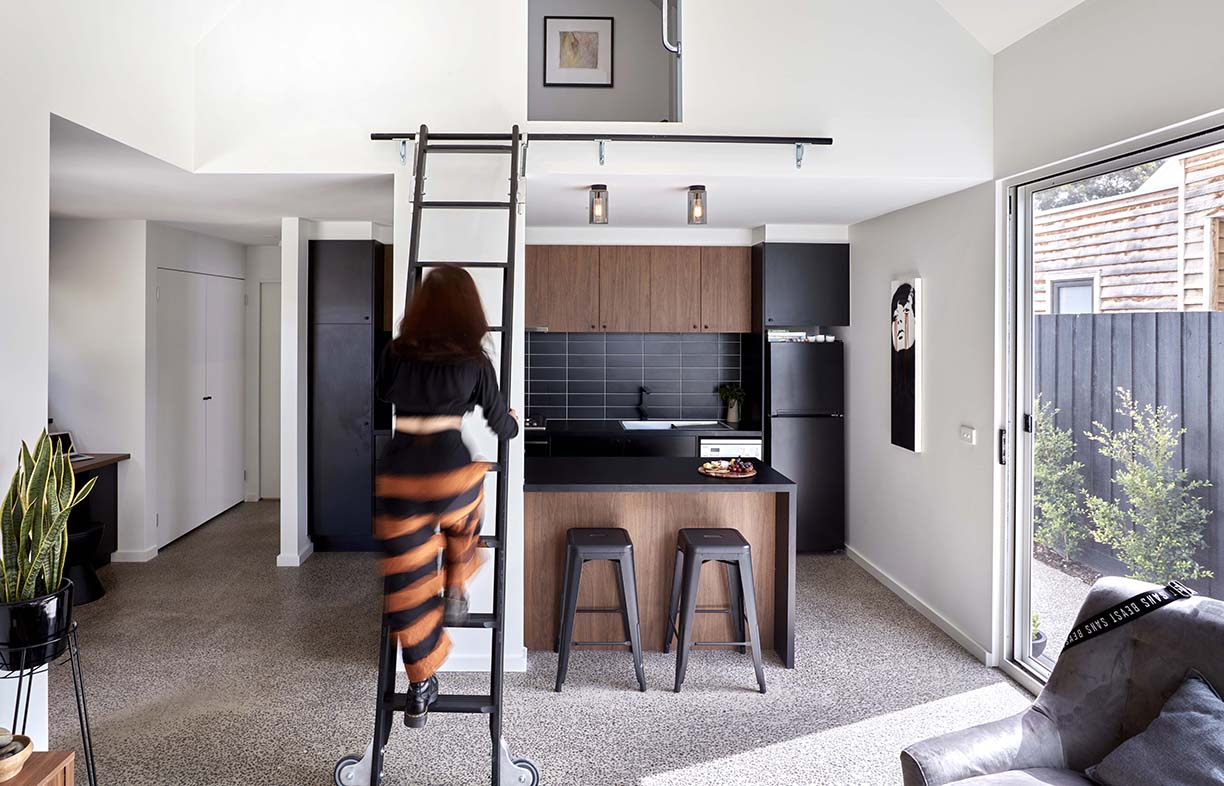 Builder-designer Sally Wills specialises in compact housing, and her new home is an exemplar of affordable 7 Star construction.

It would come as no surprise to people who know her that Sally Wills should build a tiny house of just 57 square metres for herself in Norlane, a suburb of Geelong.

Her own company, Small Change Design and Construction, has developed a number of standard designs for small homes, the Norlane house being an example of her ‘XS Quark’ model, modified to suit the block. She has built another one next door to her own home.

Walking into the house, an entry space opens into a bright kitchen/living room area. There’s a study nook at the extension of the entry, facing the bedroom which has a built-in robe. A bathroom and laundry are tucked into the south-west corner of the house. To create room for storage, the house has a loft perched above the kitchen, accessed by a ladder.

The tiny size of the dwelling is belied by the generous feeling of space created by the high vaulted ceilings of a steep, gabled roof clad in corrugated steel, and it is the combination of clever design and size (and consequently low embodied energy) that makes the home most appealing from a sustainability point of view.

A north-facing orientation, polished concrete waffle pod slab and doubleglazed windows with thermally improved aluminium frames provide the passive solar credentials. Two ceiling fans are used to move air around and a split-system air conditioner is in position to heat and cool as needed. “The house is very stable temperature-wise,” Sally says.

Other sustainability measures include a 1000-litre rainwater tank, a gas-boosted solar hot water system, LED downlights, low-VOC paints, low-e glass in a corner window in the living area and 3-star WELS water-saving shower head and 4-star WELS toilet suite. There is room on the roof for a small solar photovoltaic system which may be installed in the future.

But it is the home’s tiny size that remains its raison d’être and most outstanding feature. “There is a very welcoming feel inside,” Sally says. She has seen a growing interest in tiny houses in Victoria in recent years, largely due to the unaffordability of larger, more standard housing, and granny flats are starting to be more common in major cities in Australia. Tiny houses recommend themselves strongly on sustainability, she says, reducing both energy bills for homeowners and greenhouse gas emissions through less embodied energy. 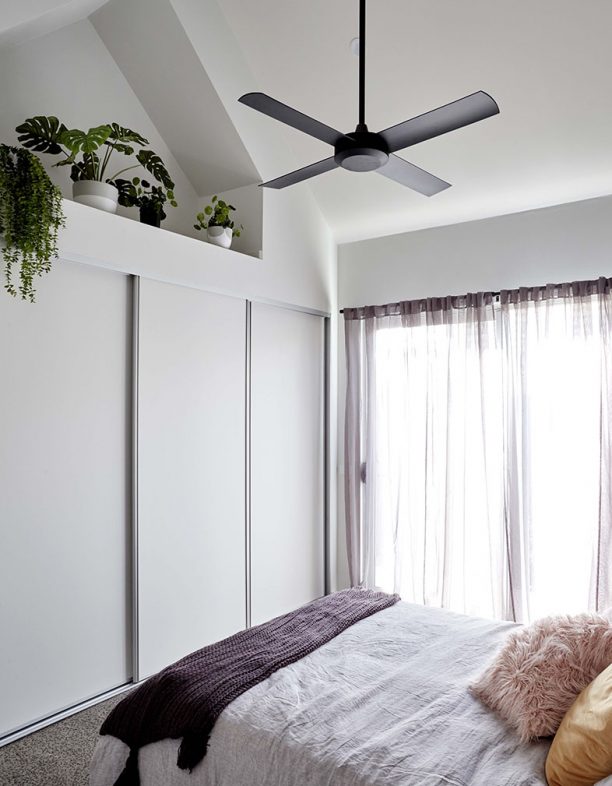 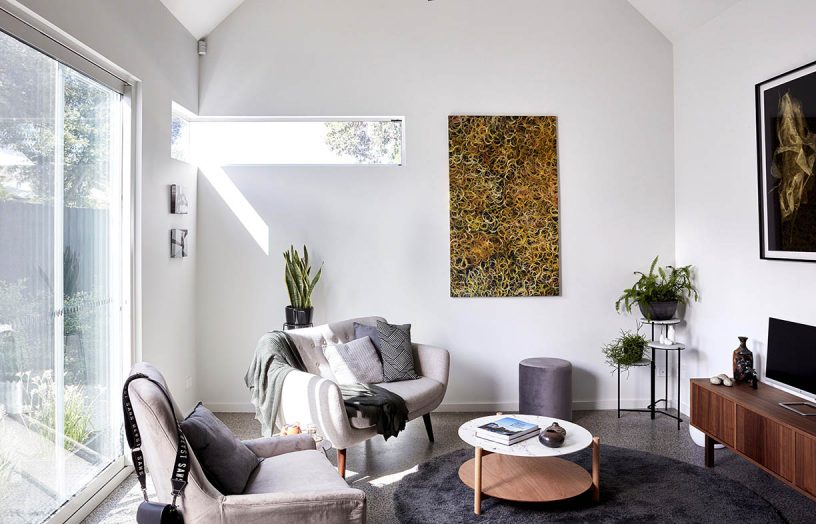 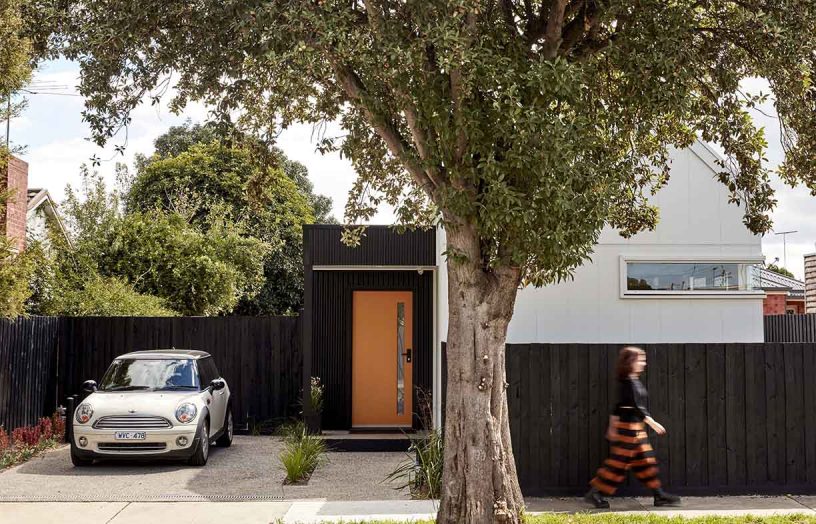 (Left) A shelf for plants could also be used for storage or artwork. (Right top) The considered use of glazing is most evident from the inside; a small corner window is designed to allow morning sunlight into the living space year-round. (Right bottom) The site is just 183 sqm but it still has ample garden space due to the built footprint being capped at 57 sqm.

“Larger houses have lots of embodied energy, which is the energy we use to mine, manufacture and transport materials, and it is actually embodied energy that is the bigticket item where we can make big inroads into reducing greenhouse gas emissions,” she says. “More than any other feature, a small footprint is the biggest contribution to sustainable design.”

Sally realises homes of 57 square metres are not for everyone, but she is adamant that Australia’s houses (at an average of 231 square metres according to 2016 figures) must shrink over time if we are to be serious in any way about environmental sustainability.

“I’d like to see the average house size drop substantially over the next few years and try to encourage as many people as I can to consider downsizing,” she says. “I know I can’t build all the small houses we need so I speak to other builders and FLOOR PLAN designers to encourage them also to take up the ‘small is better’ mantra.”

As far as her own house is concerned, she believes it is the kind of example of comfortable and practical sustainable living that can appeal to many. It represents the meeting of canny, green design and affordability. “With the very high vaulted ceilings it feels surprisingly grand,” Sally says. “It actually feels huge, like the Tardis.”