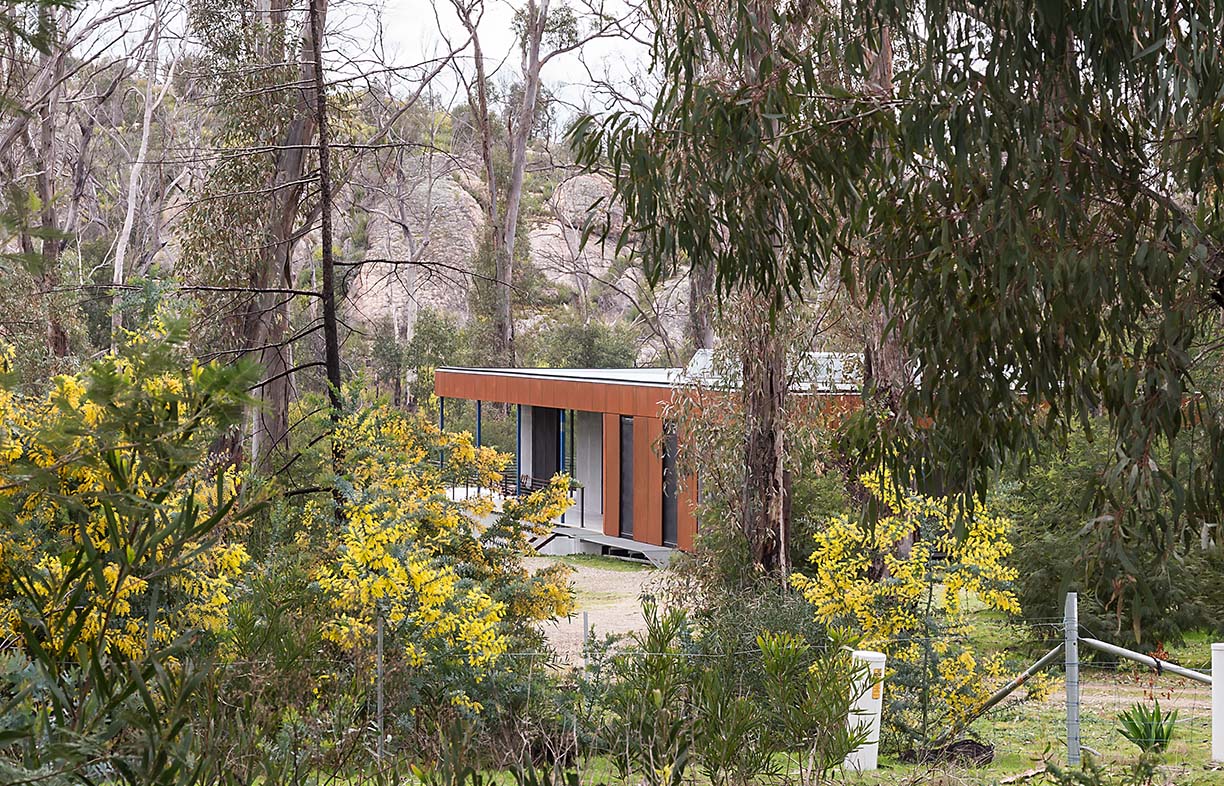 Built to stringent bushfire resistance requirements, this off-grid house in the Grampians, Victoria, is a modern replacement for a loved family weekend retreat lost to fire six years ago.

In January 2014, a bushfire swept through the northern section of the Grampians (Gariwerd), one of Victoria’s most-loved natural areas. When the blaze was out, 32 houses had burned, including a humble log cabin holiday home belonging to the Somers family.

“The fire went through on a Saturday night,” says Jamie Somers, whose parents bought the prefab cottage with views of the ranges in 1980. “The place was indefensible. The CFA [local fire authority] said not to go into the area whatsoever. We found out the next day that we’d lost it.”

In the wake of the fire, Jamie and his eight siblings got to work filing an insurance claim to secure funds to rebuild the house. The land where the original cabin had stood was rated BAL-40, the second highest category in the Bushfire Attack Level system, the construction regulations put in place in areas prone to bushfires after the devastating Victorian Black Saturday fires in 2009. The restrictions for building in such zones are onerous, and often expensive. But the family was determined to rebuild.

“Our parents bought the house 40 years ago with the intention of it being available for their kids and grandkids,” says Jamie. “We never considered selling the land; the challenge was just figuring out what to do with it.”

Luckily, Jamie’s brother Matt had some experience dealing with high BAL-rated designs. He works for a company that imports building materials, and had previously collaborated with Chris Barnes of Melbourne studio Field Office Architecture to construct his own home at fire-prone Mount Macedon. Also built to BAL-40, that house – a modern building with a long, narrow footprint, clad with Corten steel and with fold-away metal mesh protecting the windows from embers – became the model on which Chris and the Somers siblings based their new project. 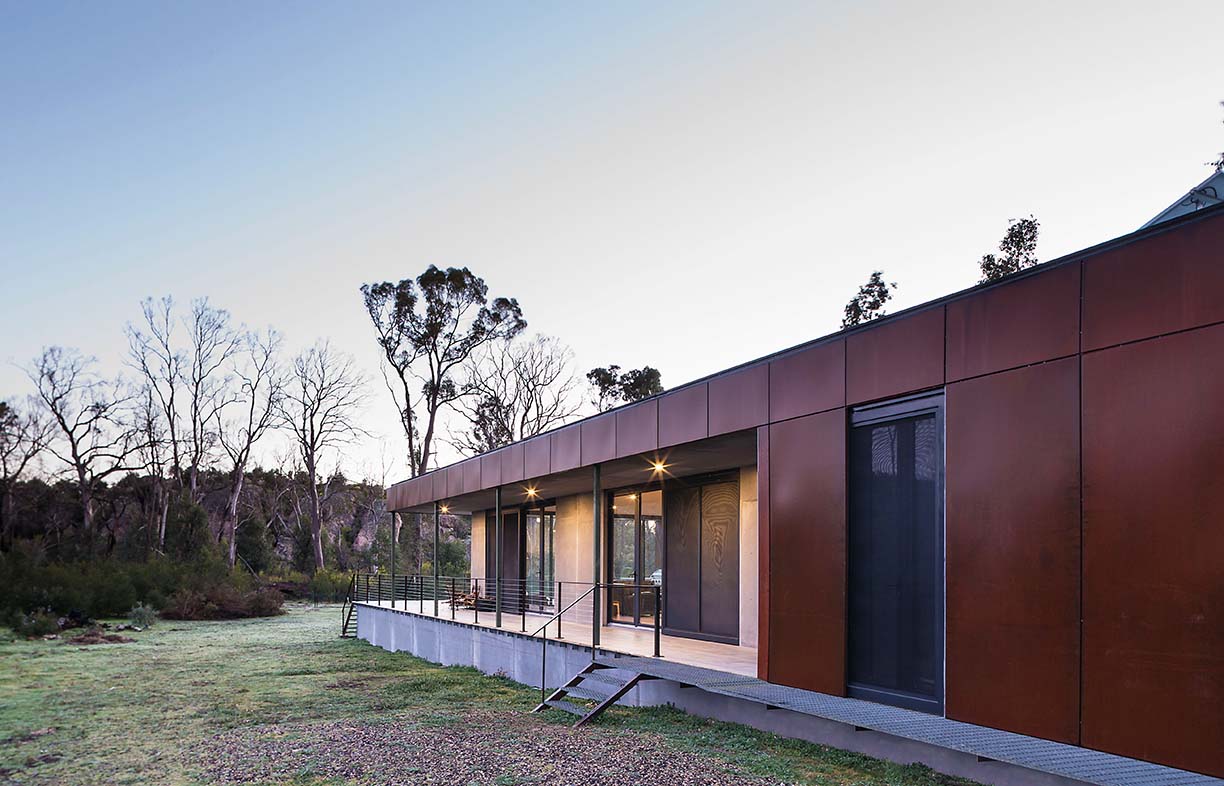 External cladding is Corten steel for bushfire resistance, and all glazing is screened with custom-designed steel mesh screens for ember and insect protection. The screens slide away when not needed.

Working with nine siblings could have been a challenge, but Chris says the planning phase of the project went smoothly. Several of the siblings developed a brief for Chris, then put it to everyone for a vote. “We found that it worked really well,” Chris says. “They were all passionate about the house but they weren’t having arguments over what towel rail we should use and that sort of thing. They were more than willing to come along on our journey.”

The brief was for a simple, low-maintenance house with four bedrooms, each with multiple beds so that three or four of the siblings’ families could be there at once.

For Chris, the challenge of the project lay in working within both the BAL regulations and a reasonable budget, to build the kind of home the family wanted. BAL-40 zones are those in which homes are deemed likely to be exposed to a high level of radiant heat (up to 40 kilowatts per square metre of wall) during a bushfire, based on factors like distance to surrounding vegetation, slope and prevailing wind direction. On the Somers family’s block, the rating system restricted their choice of house site, necessitating a rectangular footprint with the long axis running north-south. Chris’ design for the house met or exceeded the requirements for BAL-40, with all openable parts of the house covered with metal screens and all external materials non-combustible. In addition, 10,000 litres of the house’s rainwater storage is set aside for firefighting use.

As at the Mount Macedon house, Corten steel cladding provides the required level of protection from flames and embers, while also giving the home a warm and earthy feel that echoes the reddish rocks of the Grampians surrounding it. The house uses the same innovative, custom-made tuck-away metal mesh window coverings; they can slide neatly behind the cladding when not in use, and double as insect screens on warm summer nights. 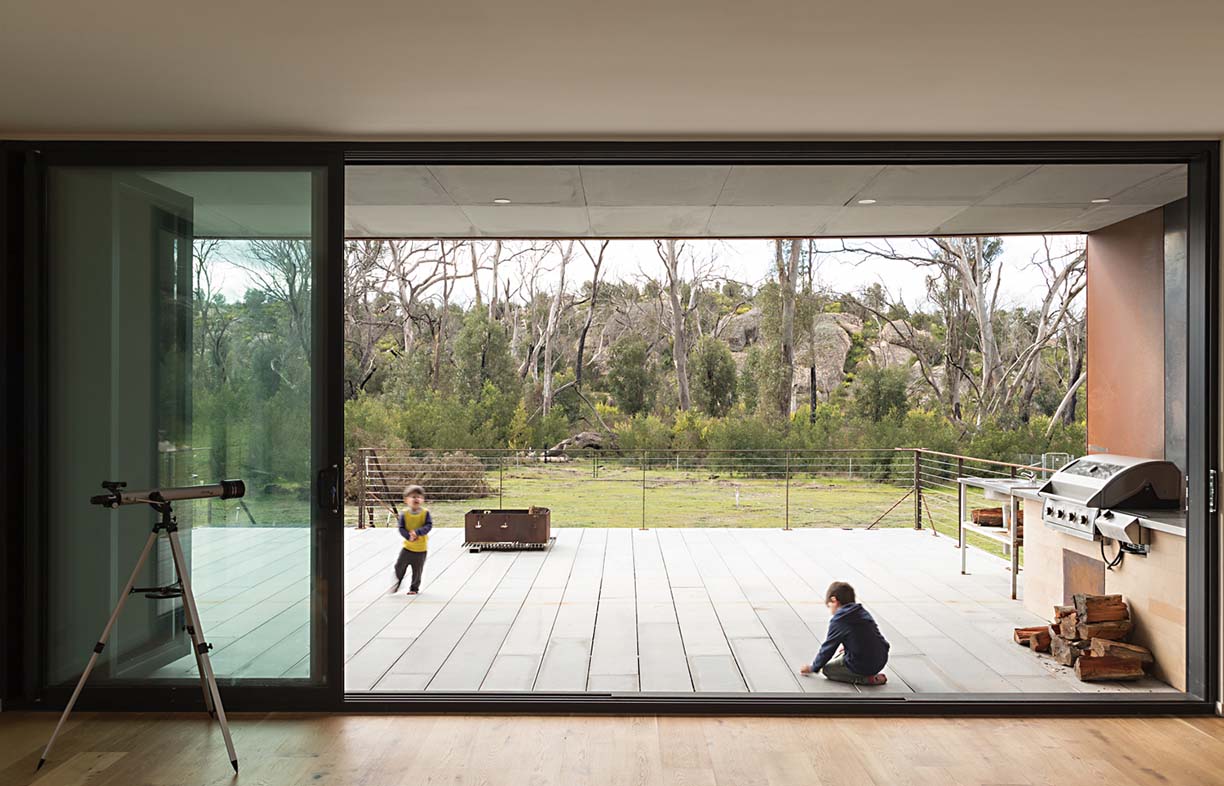 The living space is extended with a large partially-covered deck, made from fibre cement to meet the BAL-40 building requirements.

The original log cabin had been entirely off-grid, and the new house would have to be as well – connecting to the electrical grid would have cost around $100,000. Thus, Chris also focused on energy-saving techniques in his design to make sure the solar and battery storage system could provide for the home’s electricity needs. Making the most of passive solar principles, he oriented the house with the living space and deck to the north and the less-used bedrooms to the south. Large windows facing north allow for passive solar benefit in the busy social spaces as well as showcasing beautiful views of the bush and the ranges.

The house has no air conditioning; instead, the narrow footprint allows easy cross ventilation in summer months, aided by well-placed ceiling fans. A woodburning stove in the living room is the home’s only heating.

Despite the costs of adhering to stringent regulations, the family were able to draw on their own resources to keep the cost of the build down. “I was dealing with a lot of suppliers of materials for work, and we had the opportunity of leveraging off that,” Matt says. “One of our brothers-in-law is a builder, and there’s an electrician in the family.”

Construction went smoothly, and the family is thrilled with the finished product. “The little log cabin we had, although functional, was always draughty, freezing and a bit dark,” Jamie says. “This place is full of light, and everything is new and modern. The outlook to the bush is brilliant through the big expanse of windows. It’s just got a warm sort of feeling about it. Everyone that walks in says ‘Wow, this is a really nice place to spend time with friends and family.’” 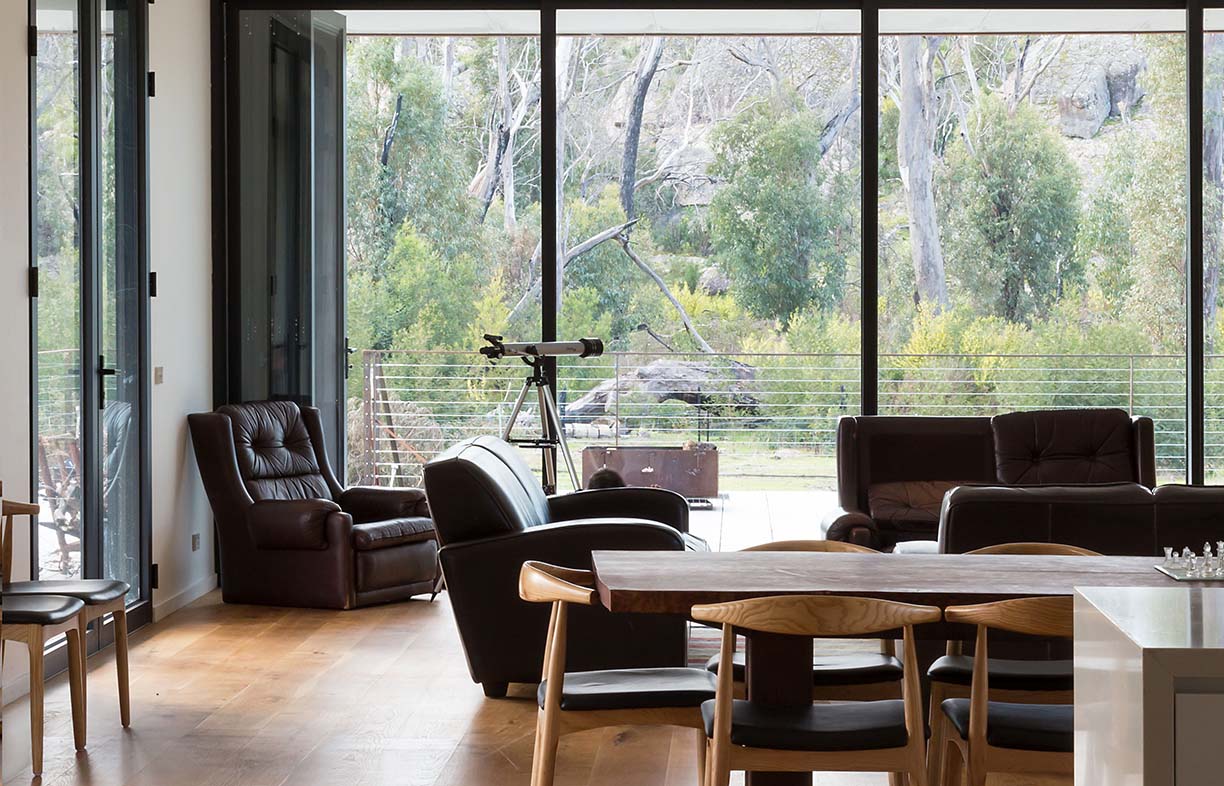 The house is well-insulated, and features double-glazed windows and doors with thermally broken aluminium frames for thermal comfort and energy efficiency.

Chris wasn’t involved in the build itself, so he didn’t see the finished product until months after its completion, when he went to stay in the house for a few days with his wife and some friends. “As an architect, it’s such a great experience to be able to stay in a house you’ve designed,” he says. “Seeing the way the sun moved across the windows through the day and the way the fireplace worked when we all sat around it at night. All these little things you try to imagine as a designer, but until you see them ‘in the flesh’ it’s hard to get a full grasp.”

The family doesn’t take the BAL-40 rating lightly. They are careful about using the home during bushfire season. “We’ve got a policy that if anyone wants to go up between November and February, we look very closely at what the weather is doing, and if there is any sign of a total fire ban no one goes there,” Jamie says.

Chris says building the Mount Macedon and Grampians homes taught him to see the challenges of building to BAL standards as an opportunity, rather than a limitation. “Often when you’re given these parameters, it spurs you to think about things you might not have considered if you didn’t have those restrictions,” he says. “Anything is possible.” 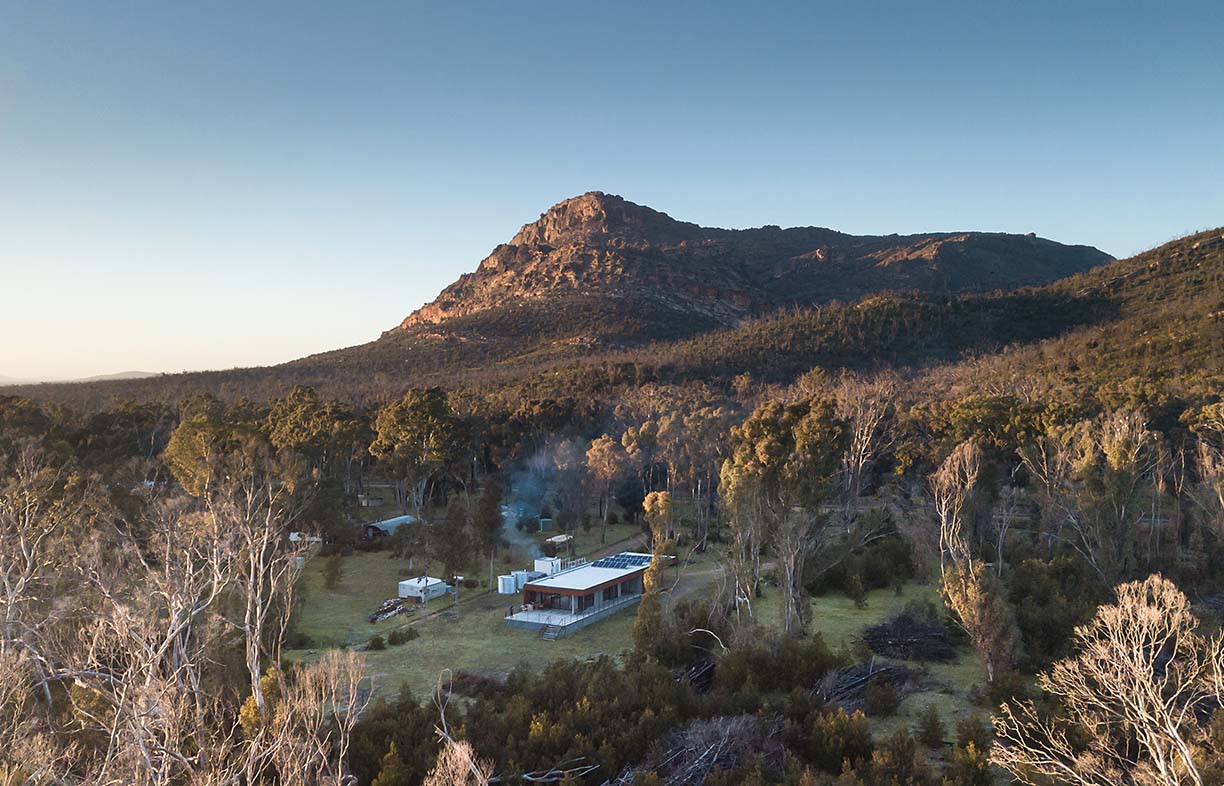 Set in a beautiful bush setting in the northern Grampians, the Somers family's house is entirely off-grid.