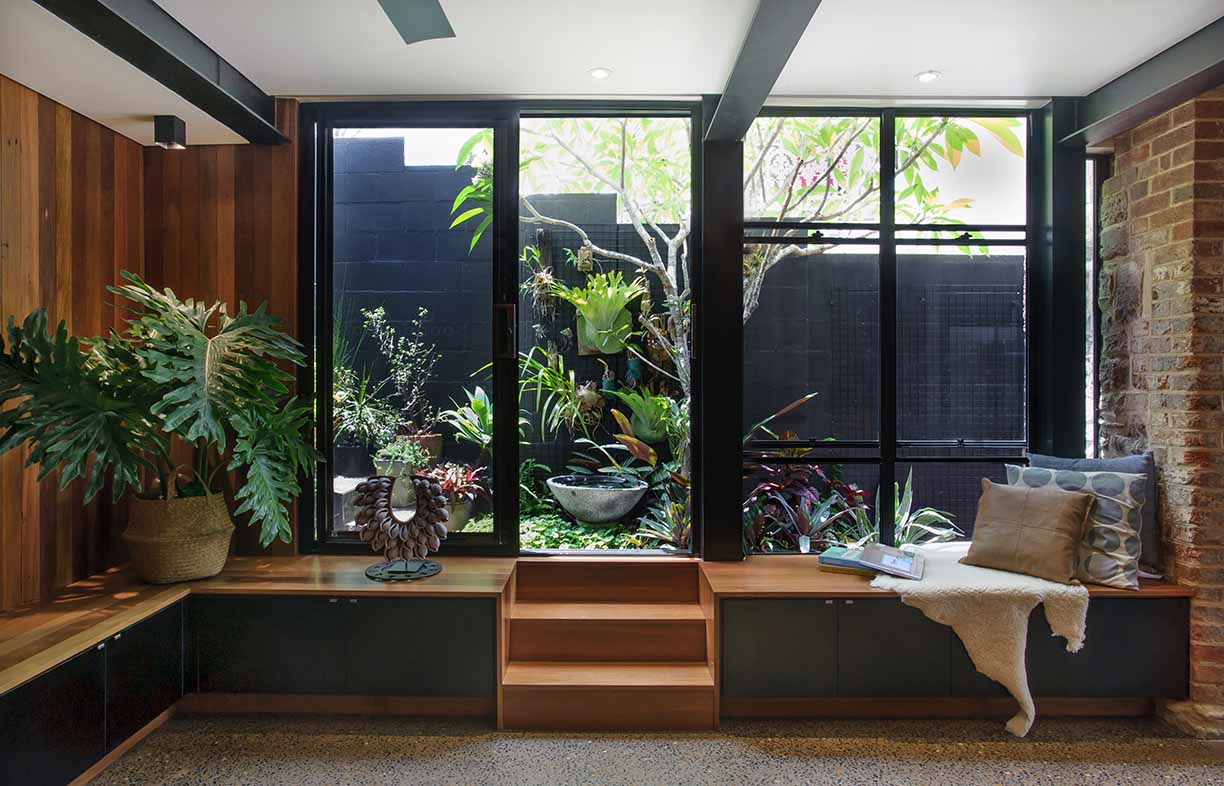 Storage is integrated wherever possible in the small house, including under the inbuilt seating in the new living space on the lower level. A hatch hidden in the timber panelling opens to the cool undercroft for ventilation in summer.

With very little wasted through the build, this former worker’s cottage has been stylishly renovated to stay cool through the intense heat of a Brisbane summer.

When architect Stephanie Skyring returned to Queensland from London in 2000 she already knew she wanted to live in a “really urban place”. And so, she settled on a tiny 48-square-metre worker’s cottage in Petrie Terrace, built in 1863. “Living and socialising in the old character houses and pubs in the UK taught me an appreciation of small spaces that we don’t have in Brisbane,” reflects Stephanie. “Small spaces bring people together.”

Twelve years later though – now with husband Michael, and their daughter on the way – it was time to expand. “I wanted to separate the living and bedrooms and create something open plan without destroying the house,” she says. She retained the tiny lounge and a stairwell, kept the original four rooms for bedrooms and extended the additional private spaces to the rear. Before the slab was added, the whole original timber house was raised to give sufficient head height to downstairs, without making the house too prominent in the streetscape. “I wanted it to remain a humble house at the front,” says Stephanie.

Retaining the original brick fireplace limited the raise to 400 millimetres, and with the reconfigured rooms transformed it from a “kitchen fireplace to a lounge room fireplace”.

A stair of recycled hardwood spirals down to the new open plan living areas, cool and connected to the ground by a warm-hued polished concrete slab. As a contrast to the upper level, “downstairs is modern and discreet”. Existing steel beams spanning the width of the space were left exposed and painted black against the new infill ceiling. Clever planning in the kitchen zone allowed for a large laundry/mud/bike/storage room, pantry and food preparation all within efficient reach of one another. An unusual three-layered kitchen evolved to make the most of the space available; instead of constructing a wall and splashback behind the sink, she instead left it open to the pantry behind to create a ‘third’ preparation area. “It works really, really well,” says Stephanie.

By setting the extension further from the east boundary, morning sunshine sneaks down the side in winter. Curtains in the living room reduce heat gain in summer. Although the original upstairs rooms with single-skin timber walls can get warm on hot days, they cool quickly with breezes funnelled from the lower courtyard up the stairs and out through the secure front screen door and the loft space. In the living room, a hatch hidden in the timber panelling opens to the cool undercroft for crossflow in an otherwise airflow ‘dead corner’. All in all, the house is a perfect retreat from Brisbane’s increasingly intense summers. 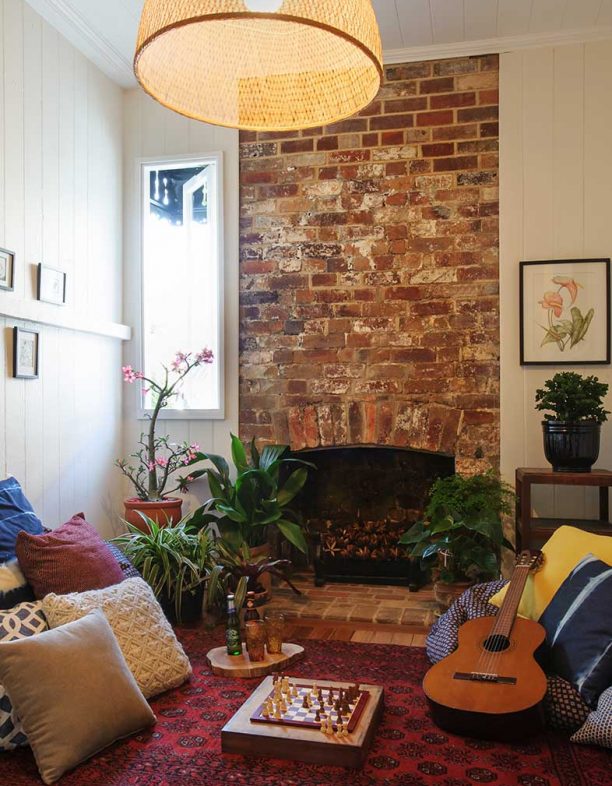 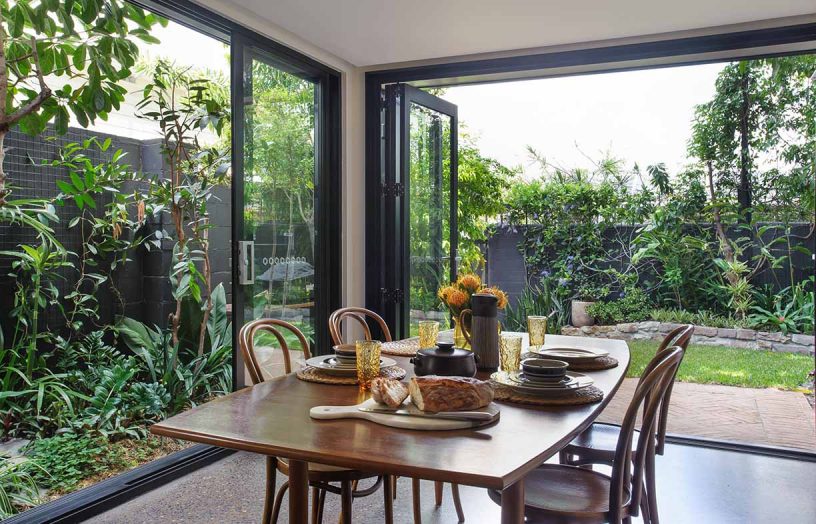 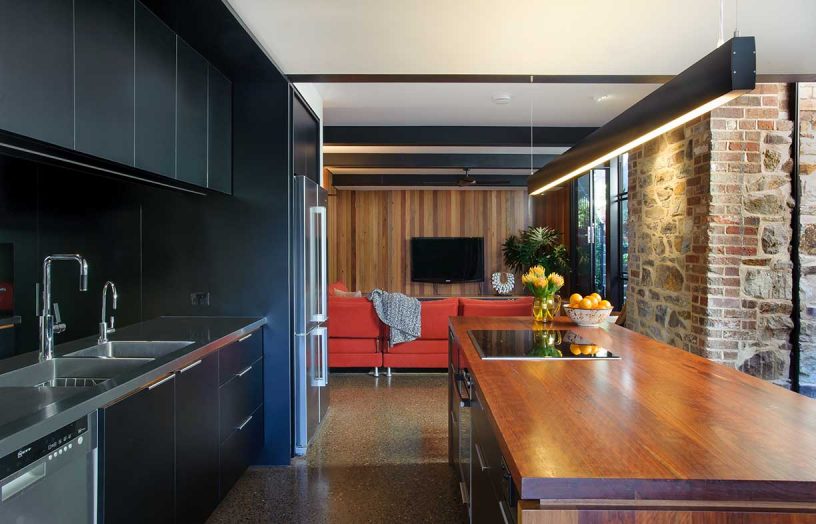 When the flyscreens are removed the dining space opens straight out into the garden. With no space for a deck, this room is a good proxy for indoor-outdoor living. And where you might expect a splashback the kitchen is actually open to the pantry, which creates extra preparation space behind the sinks, making the most of the tight space available

“There is no wasted space,” says Stephanie, adding that good use of space was an important consideration in all her designs. It means carefully integrating discreet storage wherever possible, such as in the stairwell where existing beams created an opportunity to incorporate cupboards on all sides, and in the living room a large storeroom hides behind secret doors in the timber panelling.

The inviting garden, fed by the rainwater tank and worm farm, feels much larger thanks to the thoughtful planting design. “When we remove the insect screens and open all the doors, the living spaces extend to the boundary, to bring the outside in. We don’t have a deck so the dining area is effectively a Clayton’s deck to become our indoor-outdoor space.” The back garden, main bedroom and loft are totally shaded from summer afternoon sun by a neighbouring tree; deciduous vines are growing over trellises to the east as a further buffer. While waiting for the front garden to establish, Stephanie successfully convinced council to dig up an existing bitumen footpath for grass to reduce radiant heat. She is now campaigning for street trees.

Stephanie also minimised waste in the new build. Very little of the original fabric of the early cottage was demolished. Flooring removed for the stairwell was used to repair the remaining floor and the wall framing was retained as a screen to the stair. In the bathroom, the original hoop pine chamferboards and braced frame are a feature, revealed from behind fibro. The same large format tiles were used in both bathrooms to minimise waste and simplify cleaning and laundry tiles were remnants from a previous renovation.

All the doors on the bedroom level and most of the windows are an eclectic mix of secondhand; as are all the pendant lights. Local plantation pine was used for the few new windows and doors. Re-milled salvaged timber has been used extensively as wall panelling, kitchen benches, bathroom cabinetry, furniture, screens and flooring upstairs. Stephanie had looked into recycled timber but found it was “too hard to get a uniform job lot”.

Although the rooms in Stephanie’s home are relatively small, each one has textural and spatial interest, as well as creative storage. “Kids really like it because of all the little spaces and places to hide.” Someday in the future, she would like to design another home with a larger backyard: “where we could have loads of family and friends around all of the time.” But for now, it fits her family like a glove.