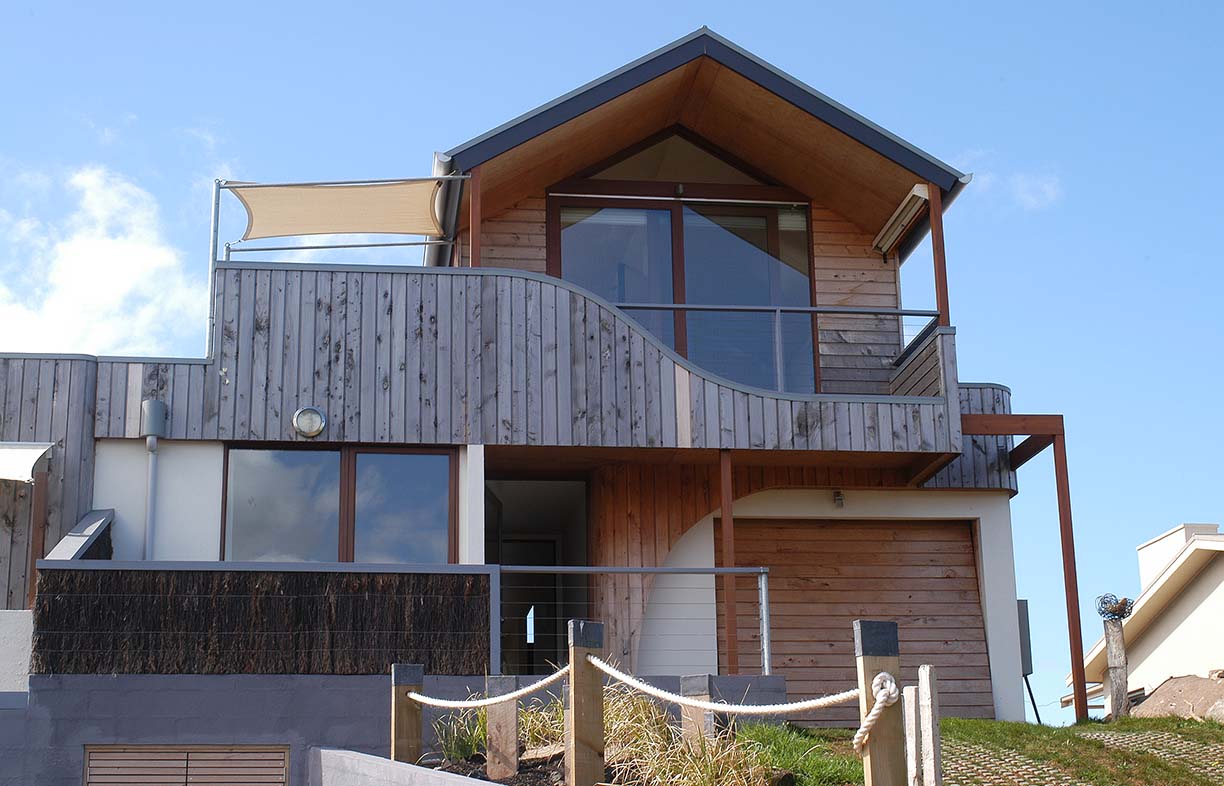 Even the garage has been designed to blend in with the landscape. Every angle has been considered in this entrancing beachside home.

“We wanted the house to have a ‘sense of place’. We wanted it to reflect the movement of waves and the shape of sand dunes,” says Bradford of his parent’s house on the beachfront at Port Fairy in Victoria. “It was very important that the design was sympathetic to the landscape.”

David, Judith and Bradford Phillips’ home is in the kind of location that makes most of us sigh and go dreamy-eyed. On the edge of the small town of Port Fairy, about 25 minutes west of Warnambool on the Great Ocean Road, the house has breathtaking views of the ocean, the historic Griffith Island lighthouse, the Moyne River tributary, the reef lying out yonder and beautiful Eastern Beach with its characteristic Norfolk pines.

It would have been possible to build any kind of house in this magnificent spot and still enjoy the views. But Bradford, who was the driving force behind the sustainability features of the house, believes that “our dwellings reflect our social conscience.” For him, it was far more fulfilling to build a site-responsive, minimum-impact house that blends with its surroundings.

Bradford’s interest in energy efficiency and sustainable design comes from a belief that we have become disengaged from the natural environment. He was also aware of the long-term financial advantages of energy efficiency on both a personal and community level. 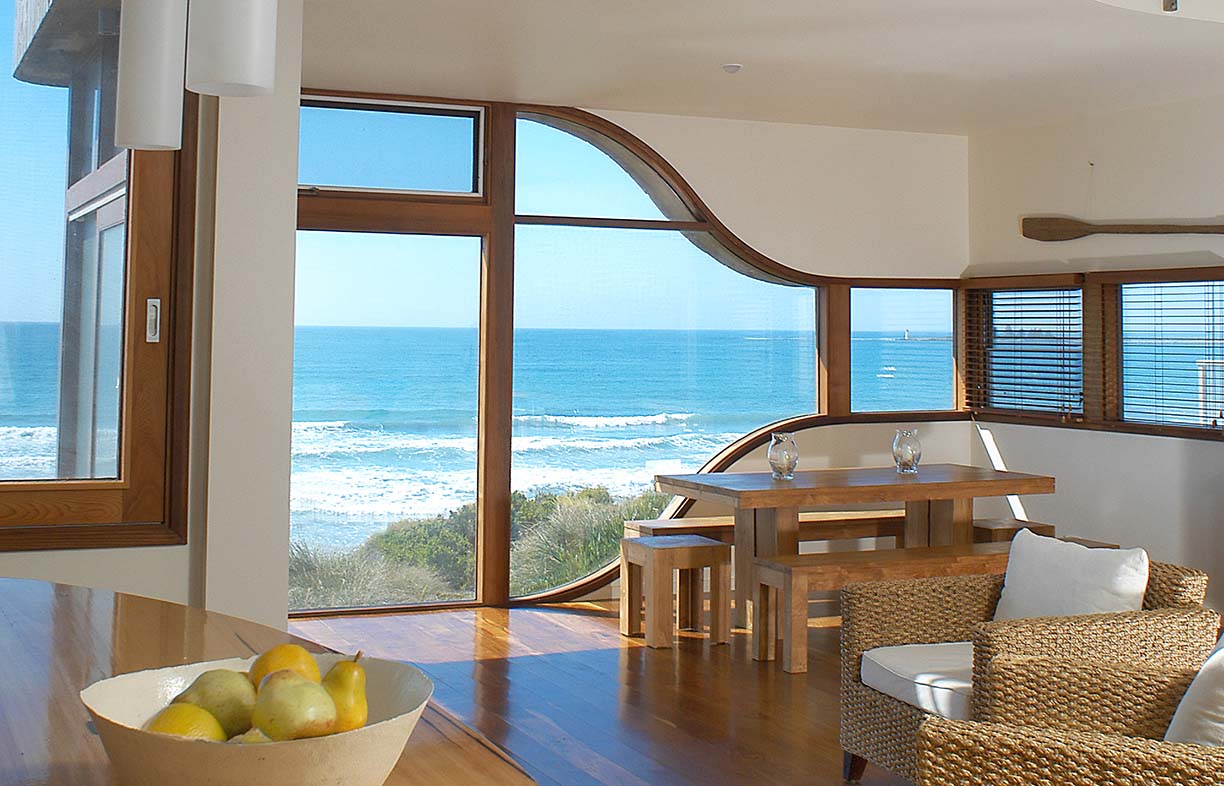 The clean, white walls and harmonious timber finishes provide a complimentary foredrop to the mesmerising views.

The family owned the property for 50 years before they decided to subdivide the site. It created two beach frontage blocks, and a third one that faces the street. Part of the land was required for a shared driveway and was designated common property. A further 139 square metres, adjoining a road reserve, was donated to the local council. This formed public open space, which is a subdivision
requirement. David and Judith kept beachfront block of 473 square metres for themselves.

It was planned from the start that the houses on the two beachfront blocks would share a party wall and sympathetic designs, so certain covenants were placed on the adjoining block before it was sold. Building designers Andreas and Judy Sederof from Sunpower Design were engaged to turn the Phillips’ visions and desires into reality.

Constructing the double-storey house required little site excavation as both the building and driveway followed the sand dune profile. Cypress macrocarpa cladding was used on top of rendered Hebel AAC block walls for a natural look. “Cypress macrocarpa comes from windbreak plantations on many Victorian farms. It weathers to a soft grey and needs no ongoing maintenance for at least 15 years,” says Andreas.

One of the most striking features of the house is, of course, the windows, and not just because of the breathtaking view outside. The imaginative window shapes were part of the design brief given to Andreas and Judy. “I don’t think that the view is diminished by limiting the window size,” says Bradford. “In fact, we feel that the views are much more focused by being framed, and through the careful placement of smaller windows that are also more thermally efficient.”

Another distinctive design feature is the creative, wave-like, stepped roofline. “The roofline is the most visible element of a dwelling,” says Bradford. “And we wanted it to be original.” 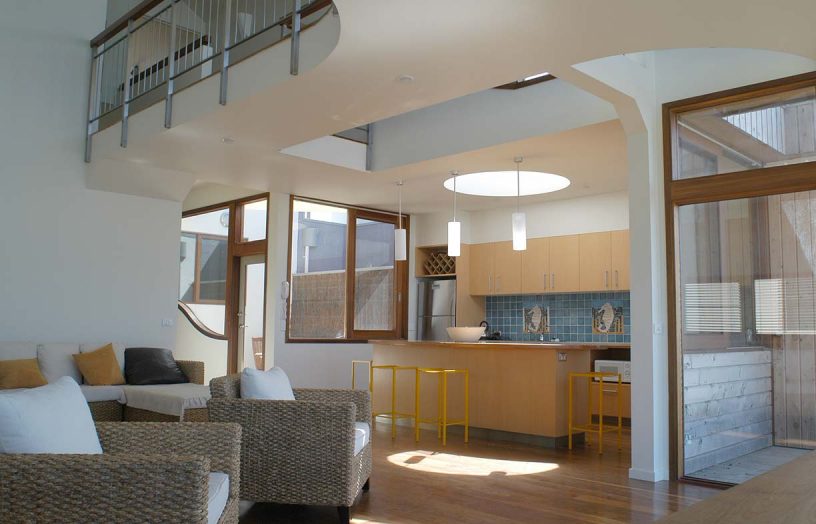 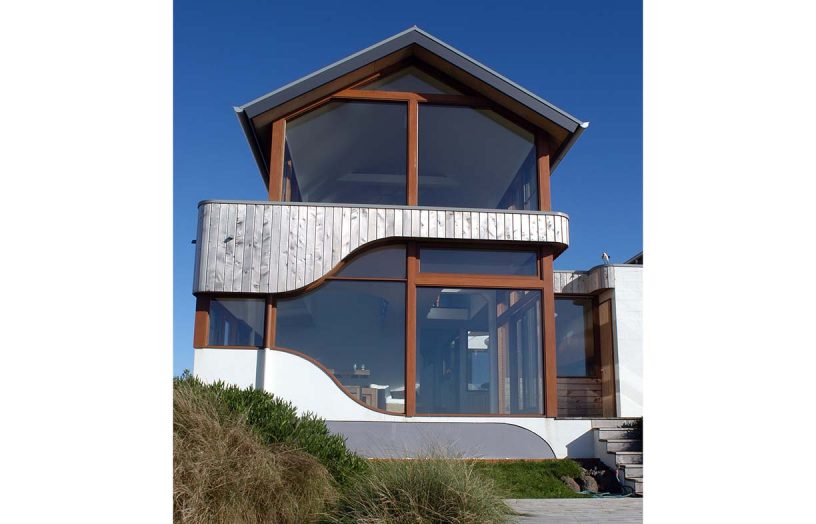 First image: The beautiful sugar gum floors were sourced from plantations and recycled hardwood Victorian ash and jarrah were used for the furnishings. Second image: The soft grey of the Cypress macrocarpa cladding helps give the house its natural look.

Inside, the clean, white walls and harmonious timber finishes provide a complementary foredrop to the mesmerising views. Low toxicity finishes were used wherever possible, including Berger Breathe Easy paints and Porters limewash for the walls, tung oil for the floors and Becker Acroma low-VOC sealers for the timber finishes.

Great attention was placed on timber use throughout the house, so that no old growth or rainforest materials were used. The beautiful timber floors are sugar gum from plantation sources near Camperdown and are very hardwearing. The building frame is plantation pine and the architraves and skirtings are finger-jointed pine. All cabinet finishes are from New Age Veneers or are recycled hardwoods such as Victorian ash and jarrah. The exception is the Canadian cedar that makes up the window frames, as Andreas could not source an economical alternative that had a durability of over 60 years.

Andreas has broken up the upper floor area with mezzanine spaces that not only maximise natural light and access to views, but also create vertical thermal chimneys, which allow air to circulate freely between the living areas upstairs and down. Internal temperatures are also regulated by high thermal mass from the ground floor concrete slab, together with good polywool-batt insulation and double-glazing on all windows. The interior temperature ranges between 18 and 26 degrees Celsius.

In summer, large external shade sails and drop down blinds are fitted to the northern and western windows for solar protection. Sashless sliding windows or casement windows enable large volumes of uninhibited airflow, and crossventilation through the building is further enhanced by the aligned front and back doors. 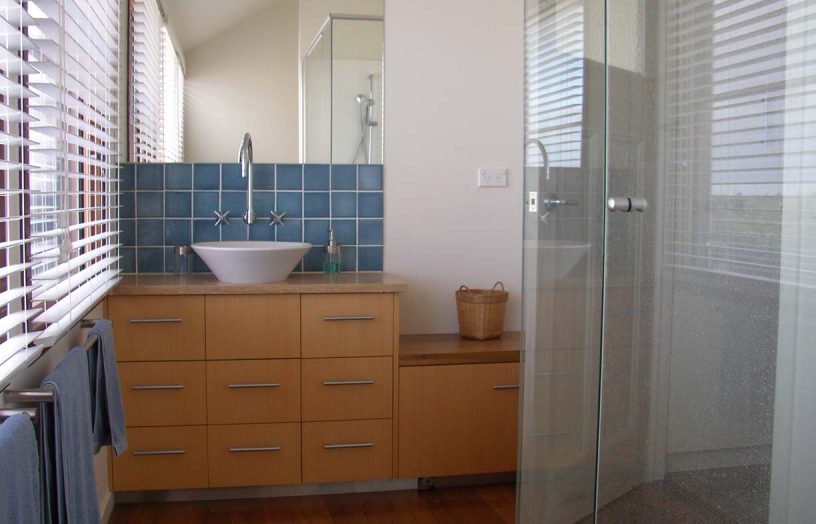 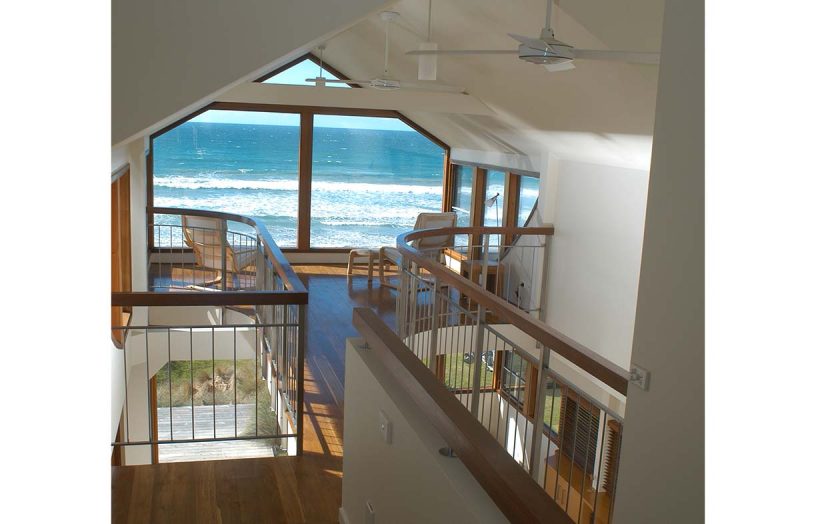 Low toxicity finishes were used wherever possible, including Berger Breathe Easy paints and Porters limewash for the walls, tung oil for the floors and Becker Acroma low-VOC sealers for the timber finishes. Second image: The house is designed to allow cross ventalation, together with the insulation and double-glazing this keeps the temperature inside below 26 degrees.

The garage and driveway display the same sensitive design and philosophy as the house. The shared driveway has been laid with Hume BG slabs (concrete grass pavers) interspersed with lawn. Seventy per cent lawn to 30 per cent block reduces run-off and heat reflection. The garage has been covered over with fill from the site excavation, then planted with native grasses and creeping pigface. “Garages are often a blight on the landscape, especially on the coastal landscape,” says Bradford. “The earth-covered garage was an attempt to minimise its visual impact.”

David and Judith hadn’t previously lived in a house with high environmental credentials, but they are now enthusiastic supporters. David notes that the house is much more comfortable, and therefore
relaxing, because of its high thermal performance.

Asked for his advice to anyone planning to build a sustainable home, Bradford recommends a thorough investigation of the most recent technologies, a preparedness to provide your builder with information on these new technologies, and, where applicable, getting help from your building designer or architect for any subdivision processes, to ensure the most sustainable outcome.

Looking out the windows at the deep blue of the ocean and the peaceful coastline, one cannot help but be glad that individuals like David, Judith and Bradford are taking a personal stand to promote sustainable living. It’s so refreshing to find homeowners who are committed to the environment, that one almost forgets to be envious of their magnificent home. 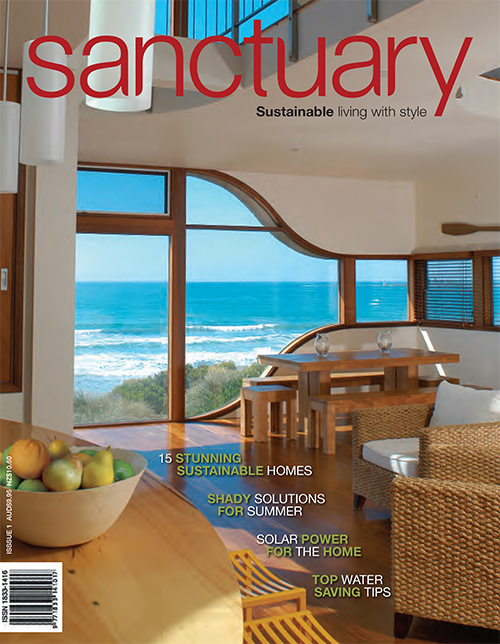