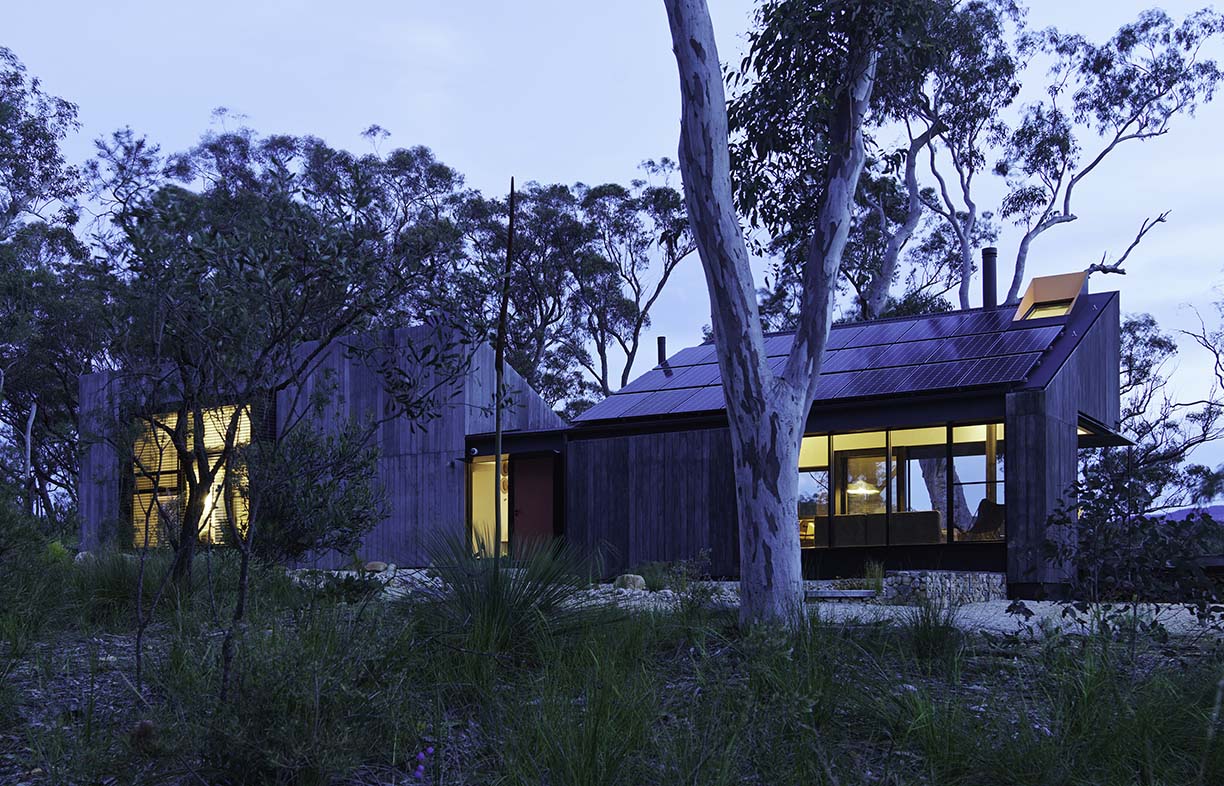 The roof over the living area of this off-grid home rises to the south to make the most of escarpment views and provide an optimum slope for the 6.7-kilowatt solar PV system, while the bedroom wing features large north-facing windows for winter solar gain.

Architect Simon Anderson experimented with creative and technical ideas for his own off-grid, bushfire-resistant home in the Blue Mountains, developing a successful prototype for client projects.

When an architect designs their own home, it provides an opportunity for experimentation that may not exist when working with clients. It’s a chance to develop and test design ideas that they can use in the future. For Anderson Architecture’s Simon Anderson and his partner Kim Bell, eight acres of native bushland on Gundungurra country in the Blue Mountains was the perfect site for researching and developing their store of ideas for a small, off-grid, bushfire-resistant weekend home.

Simon, and the nature of the site, set the conditions for the house design: it needed to be self-sufficient for energy, water and sewage treatment; able to withstand fire and snow; as economical as possible to build; carbon neutral to operate; and utilise passive solar and environmentally sustainable design methods. Those requirements all came together in a 94-square-metre house that is BAL-FZ and BAL-40 compliant (to pre-2018 standards in force when the design received planning approval) and rated at 8.2 Stars for energy efficiency.

The house is built along a ridgeline, with the steep terrain to the south resulting in a BAL-FZ rating to the southern facade, while the other three sides are BAL-40. The elongated layout, comprising two volumes with a central entrance, optimises solar penetration in winter and cross ventilation in summer. 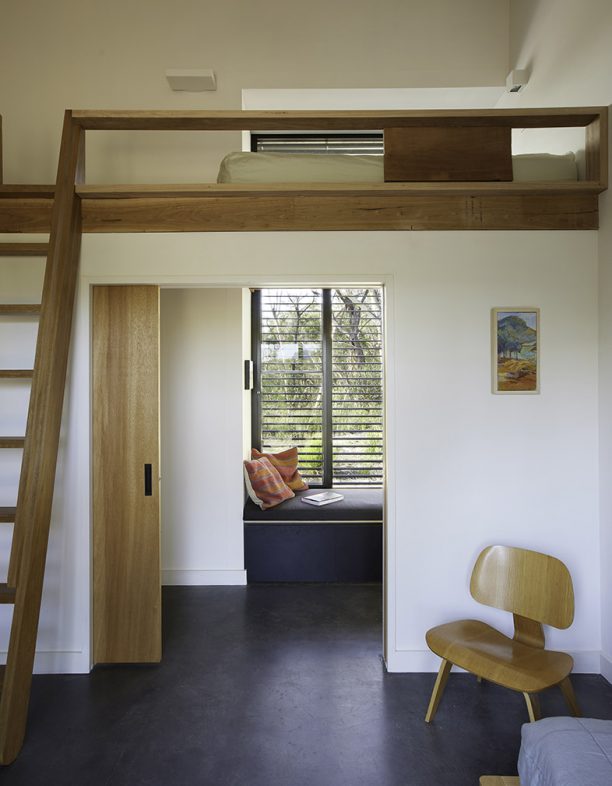 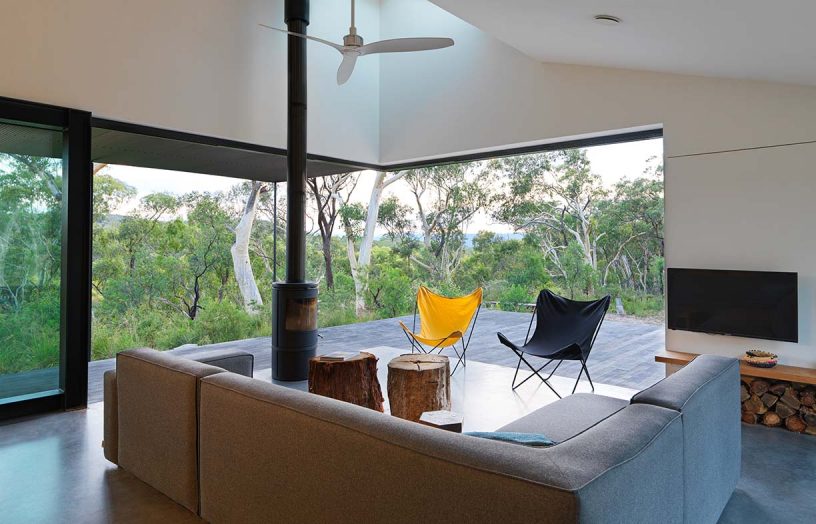 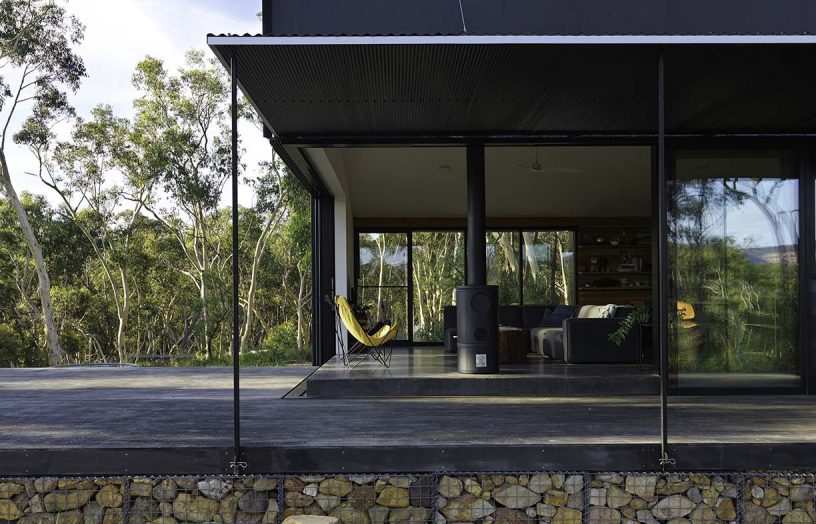 A loft area over the hallway provides extra sleeping space. Much of the joinery in the house is stringybark from trees removed from the house site and milled. In the living area, a steel portal frames the view of scribbly gums and distant escarpment. A false ceiling lowers the interior ceiling height while still creating a sense of drama, and a BAL-40 rated skylight admits natural light.

The living quarters are to the west, with an open-plan kitchen, dining and lounge that open out to a large deck. The sleeping quarters are to the east, with two bedrooms and a loft bed over the hallway; this pavilion also contains a bathroom and laundry. Each part of the house has a steeply pitched skillion roof oriented in opposite directions. The roof over the living area lifts to the south to capture escarpment views and provide a north-facing slope for solar panels. The roof over the bedrooms lifts to the north to allow winter sun inside to warm the spaces. The steep roof angles also help with shedding leaves and reducing snow loads.

The design and construction were kept as simple as possible in order to be efficient with materials, reducing both carbon footprint and cost. The house has a single-level concrete slab floor and a concrete-filled prefabricated wall system with an insulation layer on the outside. The concrete provides thermal mass and resistance to fire and termites. A heat pump powers underfloor heating, which along with most other appliances is run during the day for efficient use of the solar-generated electricity.

The double-glazed windows are BAL-40 compliant, in the maximum size pane allowable under the bushfire building standard. Large glass doors slide away from the corner of the living room, opening it up to the deck and surrounding bush. “An idea I have had for many years is to explore whether a house could evoke a feeling of prospect and refuge, like that of a sandstone cave,” says Simon. “That materialised in the design for the living room, by creating a cantilever like a cave roof and blurring the indoor/outdoor boundary.” 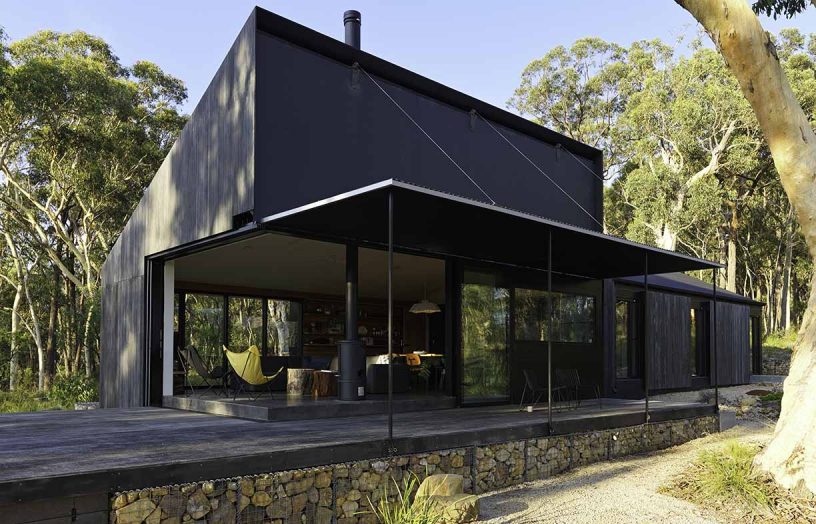 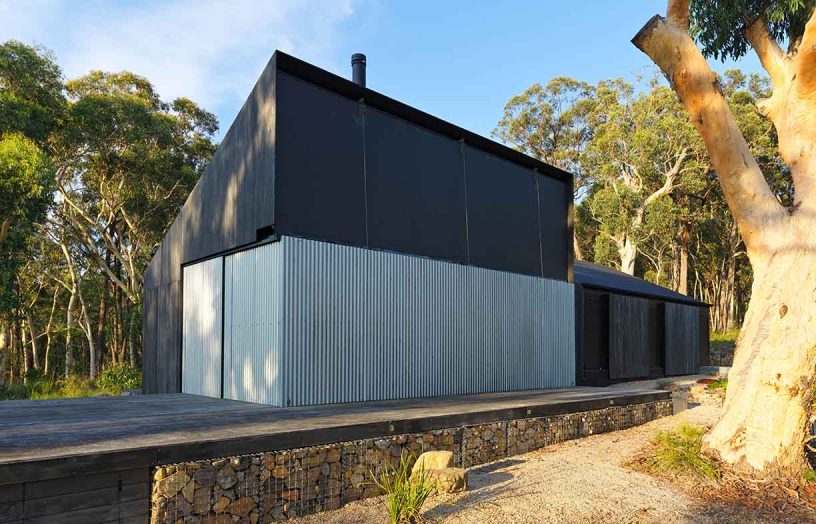 The living room glazing is protected by sliding metal screens and a large metal awning that can also be set horizontally as shading.

A large metal awning is a neat, multi-purpose feature along the southern side of the living space. It can be raised completely out of the way or set horizontally for weather protection to the deck below. Winched closed, it shutters this part of the house, with a fire blanket on the underside protecting the glass from heat and flames. Sliding metal screens shield other windows from the hot summer sun and possible embers and radiant heat from fire, and operable horizontal blinds shade the north-facing bedroom windows. These are automated to maximise the solar penetration in winter and minimise it in summer.

Attention was paid to gap-free construction and draught-sealing. “With all doors and windows closed the house is very airtight, achieving an air permeability test result of just 3.6 air changes per hour,” Simon says. “That plus good insulation greatly reduces the need for active heating and cooling, and a mechanical ventilation system with heat recovery is installed to ensure sufficient fresh air.”

The cladding and decking are a low-carbon magnesium oxide board that is dark and textural, inspired by the geebung trees that surround the house. Like the bark protecting the tree trunk during bushfire, the cladding safeguards the external layer of insulation. Stringybark milled from trees on-site is used for shelving, structural beams, ceiling joists and the kitchen bench, and scribbly gum is used for firewood, stored in Norwegian wood stacks. 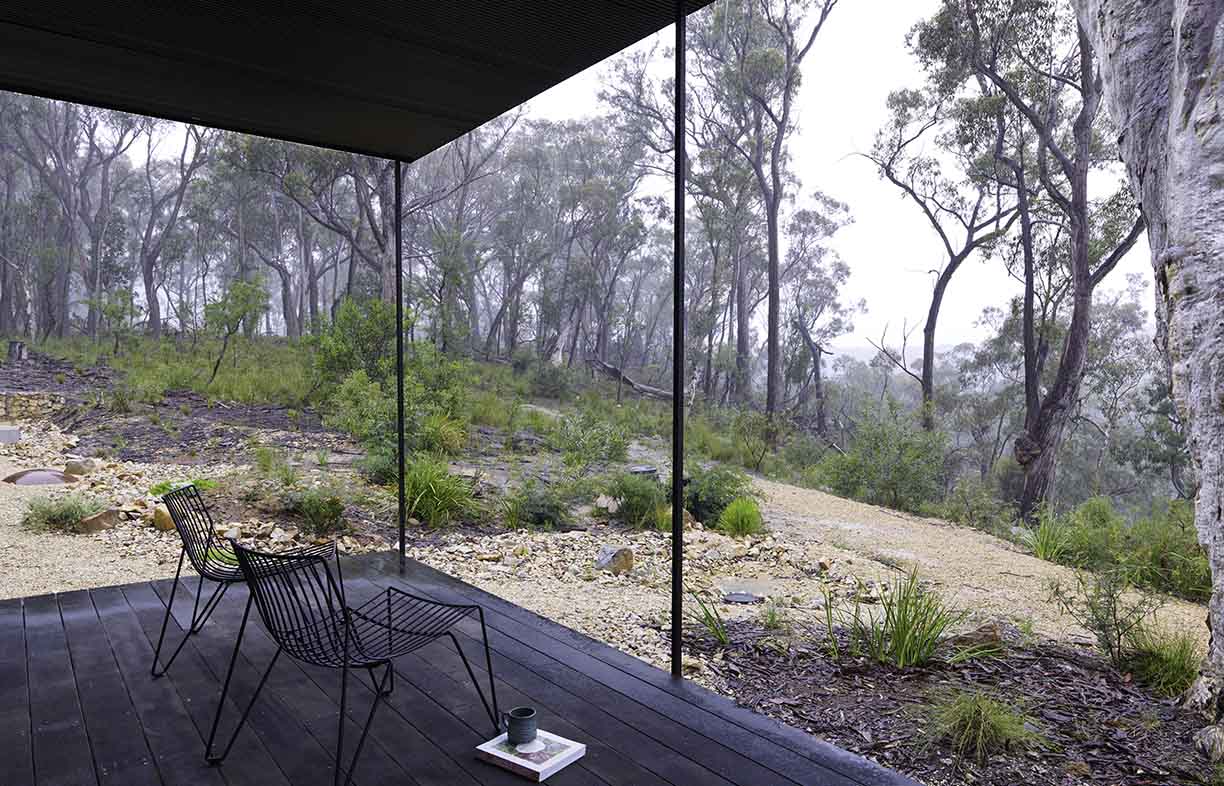 Landscaping reduces the risk of a direct flame attack during bushfire, and the house is surrounded by a Japanese-inspired rock garden and dry creek bed.

The house has laid the groundwork for developing Anderson Architecture’s expertise in off-grid and bushfire-resistant house design, and continues to advance the practice’s experience in achieving high thermal performance. “I always wanted to know what it’s like to live in an 8-plus Star rated house. One of the most rewarding parts is walking into the naturally warm house on a really cold day – it works due to its passive solar design,” says Simon.

The couple and their two sons moved into their house during the 2019-2020 bushfire season. Kim and Simon have since become fully qualified members of the local NSW Rural Fire Service brigade, through which they have gained more insight into how the RFS assesses the defendability of homes and the key design features they look for: more important knowledge for future projects.