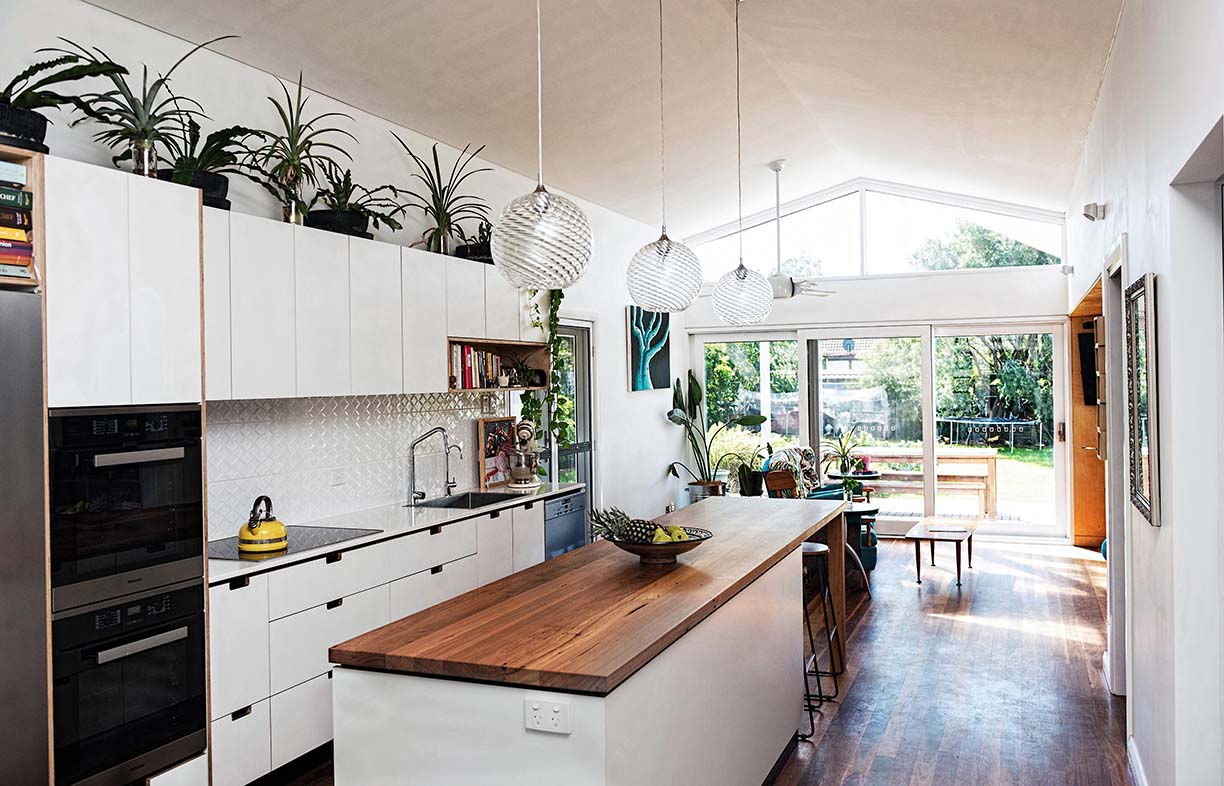 The new living area has a raked ceiling and looks out to a covered deck to the north. The kitchen benchtop is made from recycled spotted gum.

A renovation and small extension brings home the benefits of passive solar design for this Wollongong family.

When their 11-year-old daughter Sofia had a school project to design her dream home, Dion and Amy were pleased to see that her design was largely based on their recently renovated family home, with the same passive solar principles in mind.

“I based my dream home on our house because I liked that there is always sun in the house, due to all the windows,” Sofia explains. “This means that we don’t have to turn on the heater as often, which also saves energy.”

Learning about passive solar principles was not just a lesson for Sofia, but also for Dion and Amy, who were introduced to the concept at the beginning of the renovation to their cottage in the Wollongong suburb of Russell Vale. “We wanted a comfortable home that made the most of the winter sun, was shielded from the summer heat and would minimise our energy use,” Dion says.

Amy and Dion bought their weatherboard cottage in 2013, attracted to the large north-facing backyard where they could establish a garden and build a rear extension for a kitchen, dining and living area. While the hardwood framing of the cottage provided “good bones”, it was poorly insulated, the enclosed verandah on the west trapped heat and the fibro lean-to for the laundry and bathroom leaked. 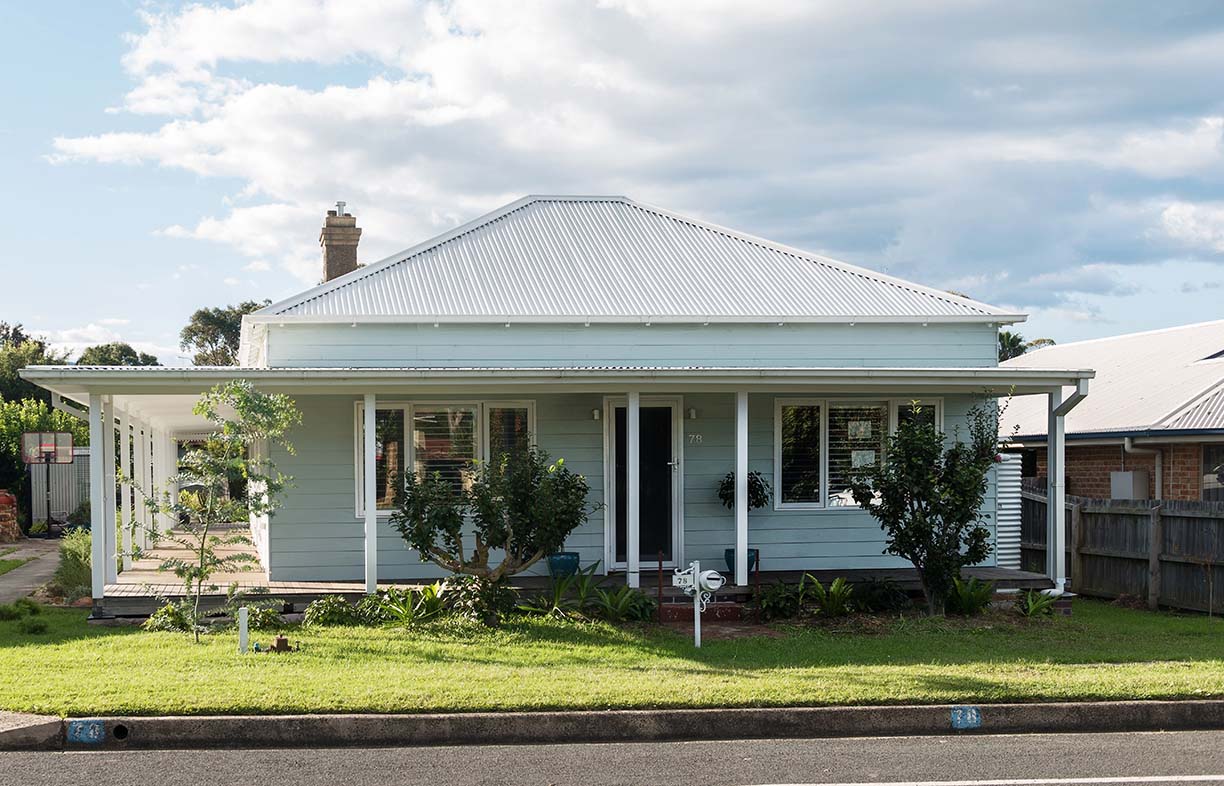 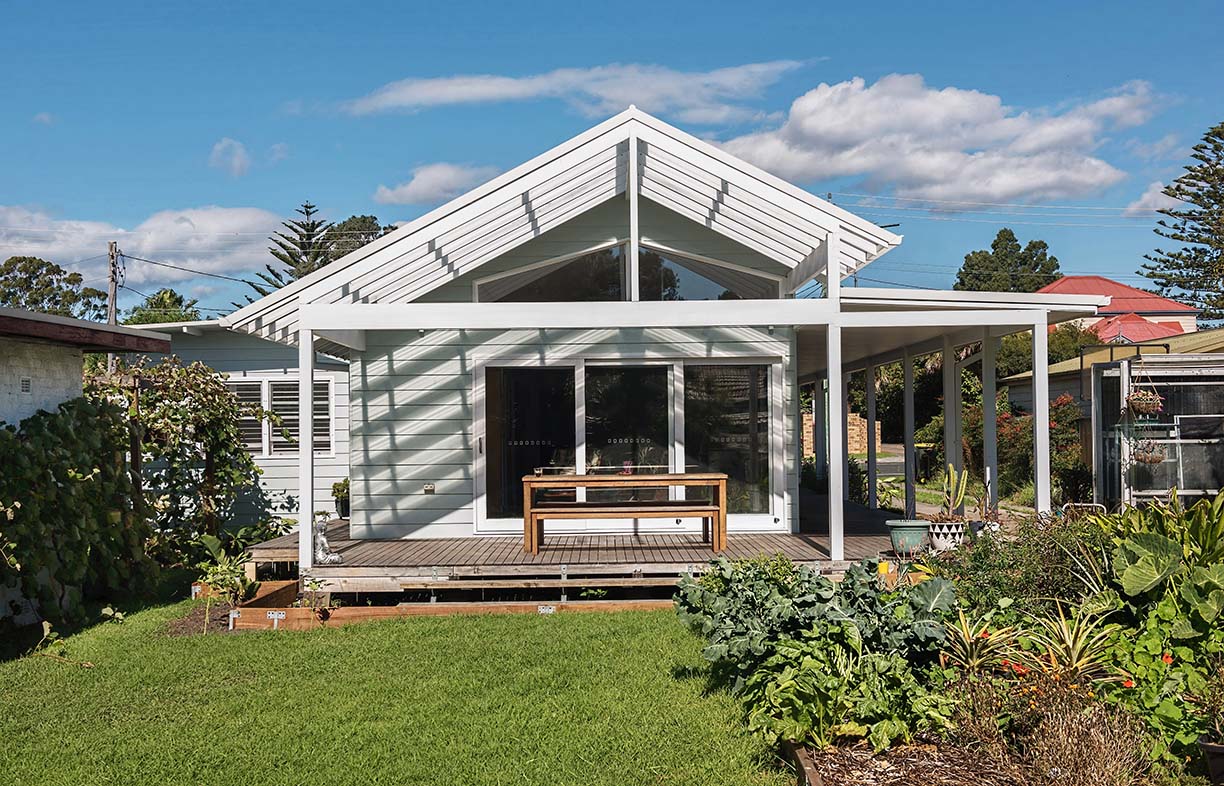 The verandah on the west had been enclosed, acting as a heat trap. It was opened up as part of the renovation. The northern deck is roofed with polycarbonate sheeting, which admits plenty of light in winter. In summer, canvas shades can be fixed under the roof.

Looking for an architecture firm with an interest in sustainability, the couple approached Envirotecture. Working to Dion and Amy’s budget, architect Andy Marlow’s design prioritised energy efficiency and thermal comfort over size. “Budget makes us control the size of a building,” says Andy. “We keep the addition as small and simple as we can because it’s cheaper for materials and labour, and we don’t want to scrimp on the things like glazing and insulation that really make a building work.”

In fact, Dion and Amy had anticipated a larger footprint for the extension. “Andy’s design was a lot smaller, which reduced the cost and effectively covered the architect fees,” Dion says.

The 53-square-metre addition provides a new bedroom, bathroom and laundry on the east side of the house, and an open-plan kitchen, dining and sitting area beneath a long gable roof. Northern glazing brings sun into the bedroom and living area, and a courtyard in the angle between the two receives the eastern sun. Dion and Amy are keen gardeners and have planted fruit and native trees and a 40-square-metre vegie garden.

The elevated timber floor, continued from the front of the house, reduced cost and embodied carbon in comparison to a concrete slab. To make up for the lack of thermal mass, phase change material has been snugly installed in a small cavity between the subfloor and floorboards in 16 square metres of the bedroom and sitting area where the floor receives direct northern sun. “It looks like a packet of ice cubes,” says Andy. “It’s not a cheap product but it’s less expensive than a concrete slab, and provides help with stabilising internal temperatures.” 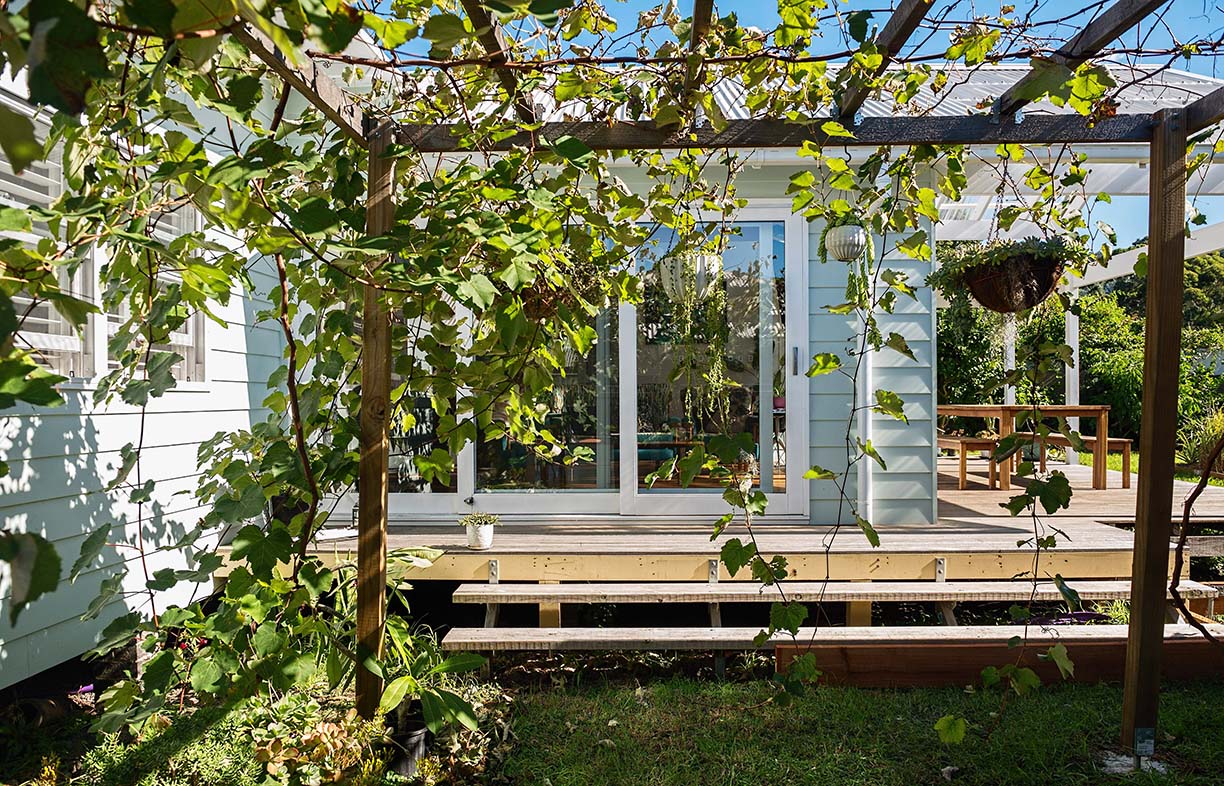 A vine-covered pergola in the eastern courtyard provides a shady space in summer. Phase-change material (PCM) was installed just under the floorboards in the bedroom and living area adjoining this space, helping to regulate the home's internal temperatures.

The gabled roof has a raked ceiling. Recycled polyester batts were placed between the rafters, and foil-faced PIR board – with joints taped for airtightness – was fixed on the underside of the rafters to provide further insulation and control air leakage. “A cavity is then created using battens between the taped foil face and the plasterboard ceiling, where the services can be run. No penetrations ensures no warm moist air can enter the roof space,” explains Andy. The thermal envelope of the original house was also upgraded with insulation retrofitted in the walls, roof space and underfloor. The old aluminium windows and sliding doors and rotted timber windows were replaced with new double-glazed windows and French doors.

Opening up the enclosed verandah offers a view of the towering Illawarra Escarpment to the west, with the deep overhang of the roof providing protection from the afternoon sun. The verandah now wraps around the extension to form a covered outdoor dining area on the north, where a canvas shade can be fixed under the polycarbonate roof sheeting during the summer months. “It allows the polycarbonate to work its warming magic in winter without that summer heat penalty so often experienced,” says Andy. 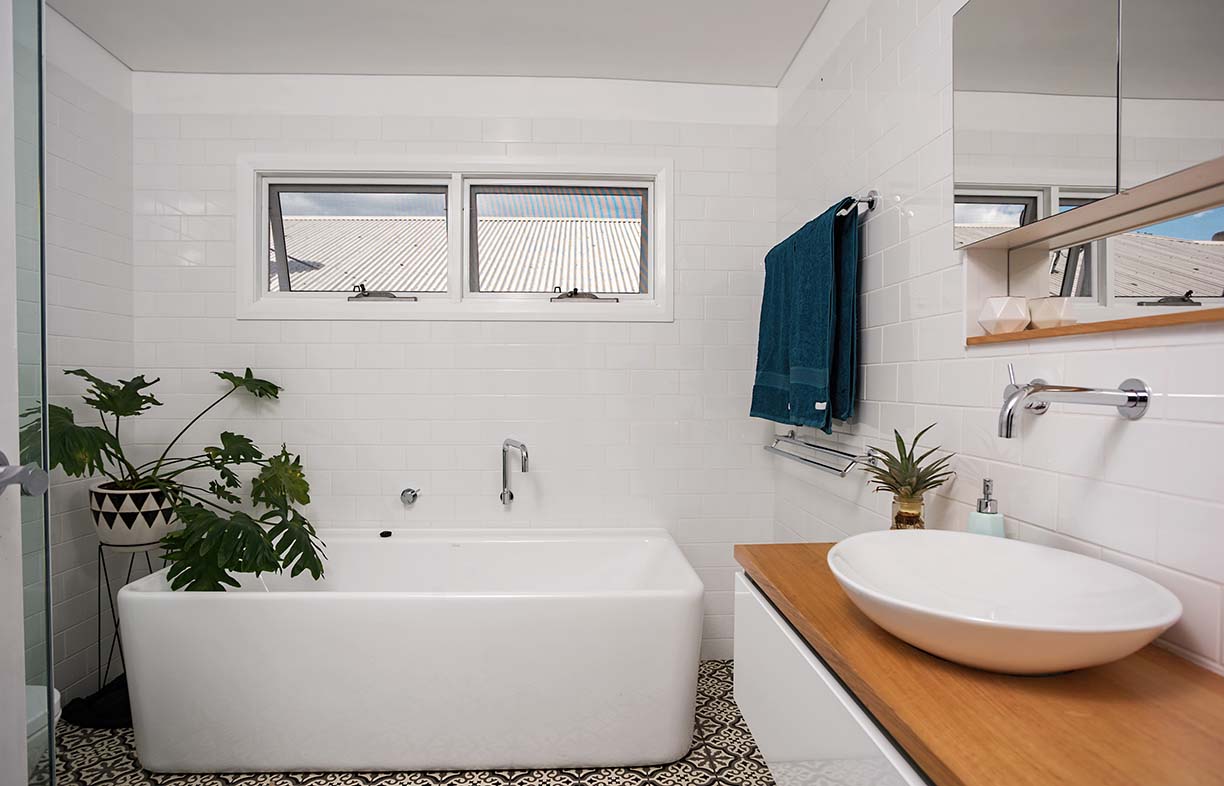 Window placement has been carefully considered to allow cross ventilation for summer cooling. The only active cooling in the house is ceiling fans in the bedrooms and living areas.

Dion and Amy and their two children moved back into the house in 2017. “The first thing we noticed was how it retained heat in winter. It is also very comfortable on summer days, as the eaves block out the sun and there is plenty of airflow in the evening,” Amy says.

The passive solar design of the house means that it is naturally more energy efficient. The family also went a long way towards an all-electric house as part of the renovation, installing an induction cooktop and a heat pump for hot water, and saw a reduction in their utility bills. In early 2020, they installed a 6.6 kilowatt solar PV system with Solar Analytics energy monitoring. “We have received our first electricity bill, and electricity drawn from the grid has dropped 33 per cent on this time last year,” says Dion.

Renew is a not-for-profit organisation dedicated to arming you with the unbiased advice and information you need to make your home and community more sustainable. If you enjoy our content, please consider supporting us by becoming a Renew member, buying our publications, or donating. Your support is critical to helping us achieve our goals.
Support Renew