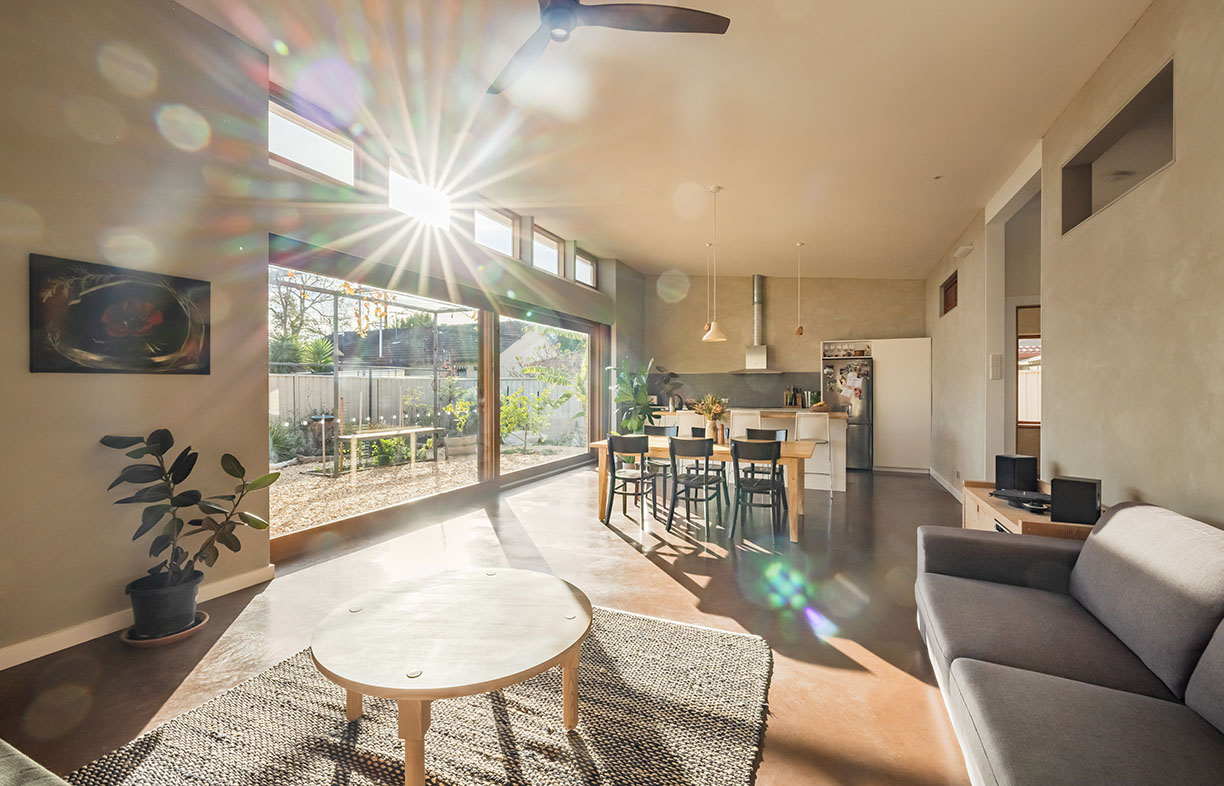 Dylan and Robyn built a small, inexpensive and super-sustainable house in Adelaide using strawbales. Now, they wear t-shirts indoors all year round and get paid by their energy company, rather than paying bills.

When friends and family visit Dylan and Robyn’s house in winter, they often have to take off layers of clothing and sometimes even ask to borrow a t-shirt. “A lot of people were sceptical about the temperature claims before we built, but they love it now,” Dylan says.

Their strawbale house – dubbed The Barn and built on a hammerhead block in Warradale in south-west Adelaide – is a stark contrast to their previous home, which was constructed of solid stone, with no northern outlook and windows along the western side, making it hot in summer and freezing in winter.

The couple aspired to create a more comfortable home after experiencing the passive solar house that Dylan’s father built in Denmark, Western Australia, about 15 years ago. They did plenty of research as they prepared to create their own sustainable haven. One of the most useful sources of information was the Adelaide Sustainable Building Network; it was at their events that Dylan and Robyn first met architects from SUHO, which specialises in the design and delivery of 9- and 10-Star homes that don’t require mechanical heating or cooling. 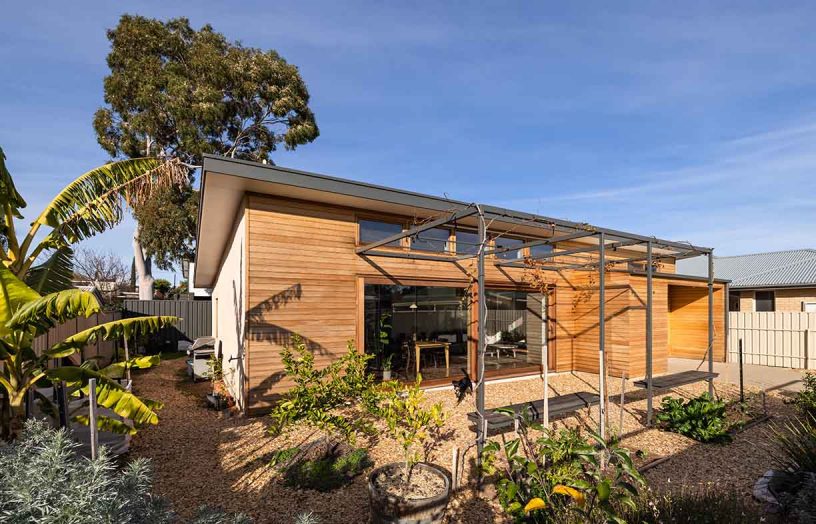 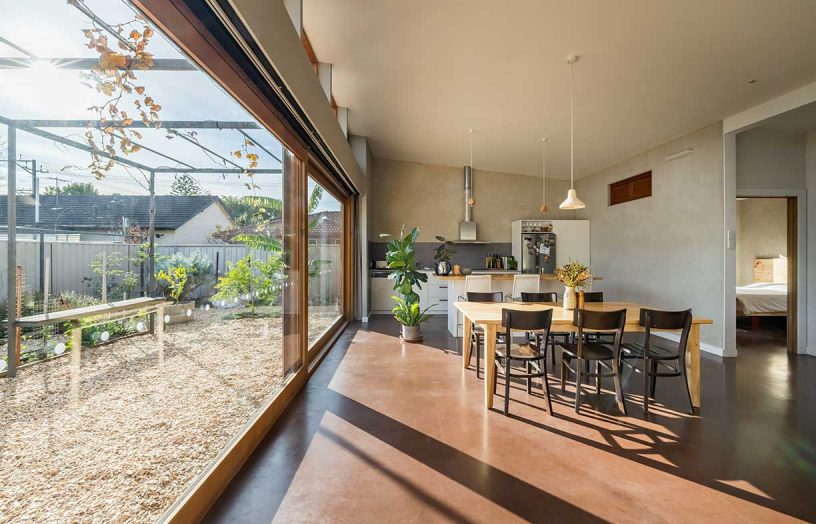 Since finishing their strawbale home, the couple have planted fruit trees including bananas, avocados, limes, pears, nectarines and apples, built raised beds for vegies and herbs and planted natives for wildlife habitat, all on a 400m2 block. A pergola supports deciduous vines for summer shade to the living space.

The simple two-bedroom house that the team at SUHO designed for the couple is rated at 9 Stars and its thermal performance is stellar thanks to a combination of factors. These include the ideal orientation: facing almost due north provides natural light and winter warmth to the open-plan kitchen, living and dining space, which has a concrete floor for thermal mass. The room also boasts large windows and sliding doors that overlook a small but productive garden and are shaded during summer by two deciduous grapevines trained over a pergola.

Openable clerestory windows in the living space and louvres in the internal walls facilitate cross ventilation. “Because of the raked ceilings, you don’t even need a breeze to promote that airflow,” says SUHO designer Ruth Nordstrom. “The increase in ceiling height from the bedrooms to the living spaces produces a convection effect that helps to remove stale air throughout the year.”

These design elements plus the excellent insulative properties of the strawbale external walls result in indoor temperatures of between 20 and 25 degrees Celsius all year round, regardless of outside temperatures and without the need for heating or cooling. That’s no mean feat in a climate where temperatures regularly top 40 degrees for days in summer and dip below 10 degrees in winter, with consecutive days of wet and cloudy weather not uncommon.

Robyn and Dylan chose strawbale for its insulative performance and the fact that it’s a natural, renewable and locally available material. However, they were not keen on the “rustic, cottagey aesthetic” of many strawbale builds. They found tradespeople with the skills to render the walls flat, and chose to clad the front facade in timber for a modern, natural look. 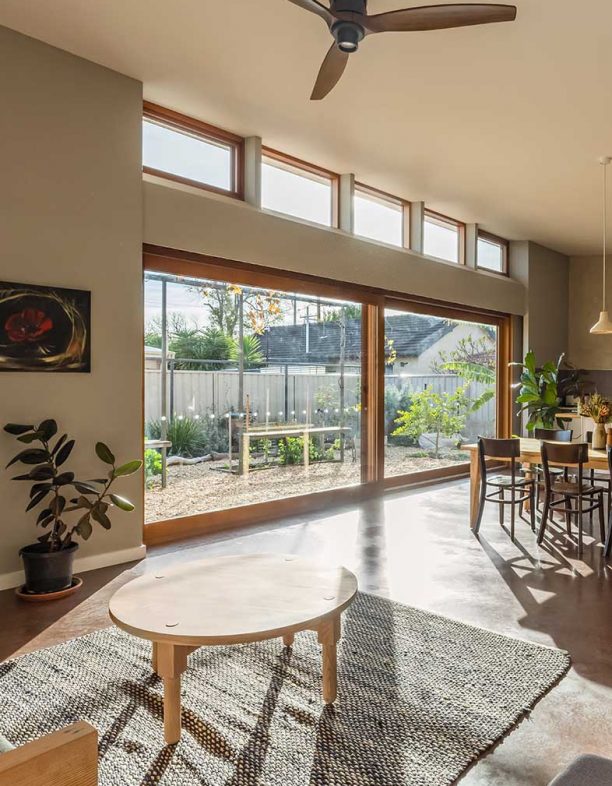 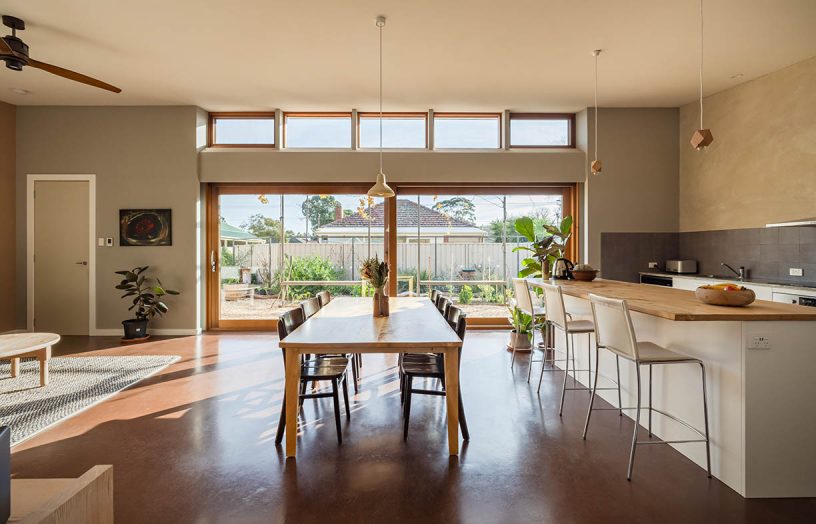 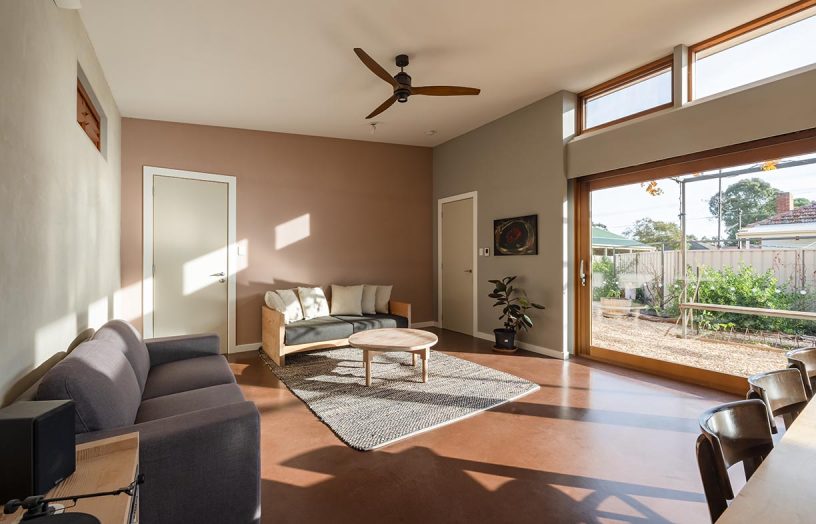 The open-plan living room is flooded with light thanks to the large north-facing sliding doors and clerestory windows. There are two sets of curtains, sheer and blockout, that tuck away into a cavity in the wall when they're not needed.

The couple engaged House of Bales to oversee the strawbale installation, with the bulk of the labour of laying the bales into the timber structural frame done by friends and family at a wall-raising weekend. Then House of Bales returned to apply three coats of render to the internal and external surfaces.

Having successfully built their strawbale house in the suburbs, Dylan is keen to dispel the myth that building with natural materials might be more complex or difficult than conventional building materials. “We never had a question from anyone at council about the use of strawbale,” he says. “We had the engineer’s drawings, and the strawbales are essentially an infill product in the timber-framed walls, so there were no extra layers of bureaucracy at all.”

In addition to the building envelope, plenty of thought has been given to energy efficiency and sustainability in other areas. For example, the hot water combines a standard electric hot water service with a smart energy diverter. The setup ensures that water is only heated using spare energy from the solar PV system, thereby maximising the couple’s own consumption of their solar generation and reducing bills. “Hot water is our biggest single user of energy because we don’t need active heating or cooling,” says Dylan. “In the first quarter after we installed the diverter, we reduced our electricity draw from the grid by 30 per cent.” He adds that this solution was about $3,000 cheaper than installing a heat pump for hot water. 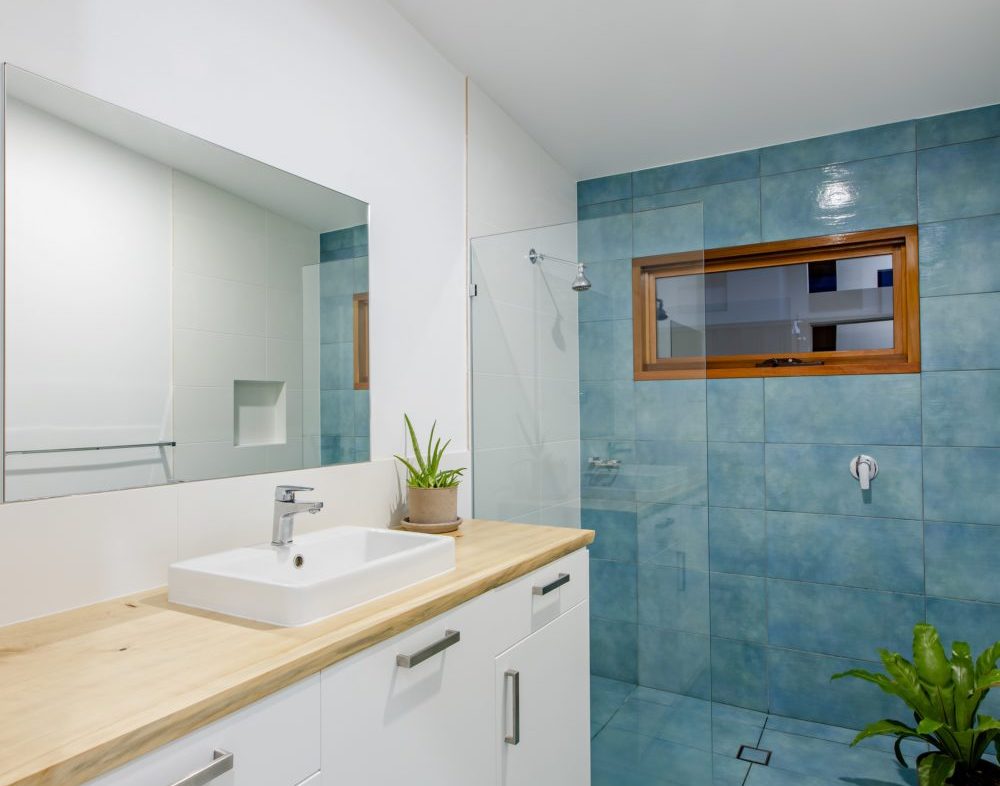 Hot water is the single biggest energy cost, so the couple combined a standard electric hot water service with a smart energy diverter to ensure it's heated only with spare energy from the solar PV system.

Because of its small size, careful passive solar design and atypical choice of materials, Dylan and Robyn’s home provides a stark contrast to the larger homes that are proliferating in the neighbourhood, where knockdown-rebuilds on subdivided blocks are becoming the norm. “It seems no thought is given to resident comfort or energy use in most block divisions and rebuilds. It’s common to see large windows facing east and west, and not a window on the northern side,” Dylan says. “The result is houses that are horribly hot in summer, cold in winter, and have huge energy bills. Applying the basic principles of passive solar design at the development stage is easy and makes for dramatically better living.” Ruth agrees, and adds: “Another issue with those houses is that there is often no ventilation around the buildings, and having airflow is key.”

Dylan says the year-round comfort has been the most satisfying attribute of the finished house, adding that he and Robyn have been pleasantly surprised by the indoor air quality and abundant natural daylight too. “The house is also very quiet inside, because of the acoustic insulation of the strawbales,” Dylan says. “A few weeks ago, there was an almost-apocalyptic storm outside with strong wind and heavy, driving rain. We could see the trees moving, but inside it was calm and comfortable.”

“Robyn and Dylan’s house is a really good example of what people can achieve in terms of holistic design, when they integrate all these sustainability ideas in one project,” Ruth says. “At SUHO, we’re happy to be part of an ongoing conversation about sustainable, high Star-rated houses, and if you look at the use of natural materials – the simplicity and elegance of them – it’s easy to see what can be achieved.”

Designer
SUHO Studio
Builders
Keystone Carpentry and House of Bales
Location
Warradale, SA
Size
House 146m2, land 489m2
Cost
Approx $250,000
Energy rating
9 Stars
Insights
“The concrete section of our driveway is only the width of a walking path to reduce heat absorption and resource use. The other two thirds of the driveway is wood chips to allow rain to permeate the soil. This gives us an all-weather, all-ability path with a third of the heat absorption, embodied carbon and cost of a full concrete driveway.”- Dylan, homeowner