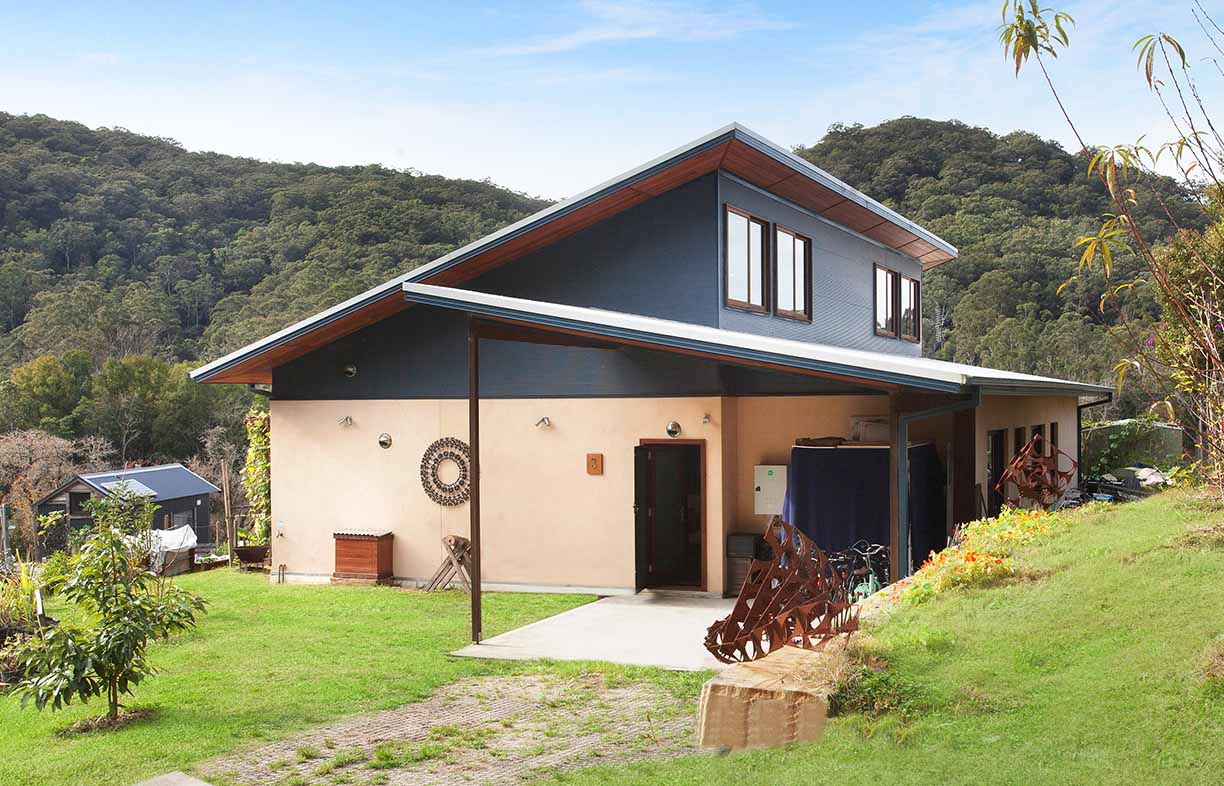 The 250-millimetre-thick hempcrete walls of Geoff’s house were built with the help of volunteers from the ecovillage. The roof was designed specifically to hold a large solar PV system at the optimum angle for solar generation.

Building with hempcrete was the central decision for Geoff’s sustainable owner-built house in the Narara Ecovillage on New South Wales’ Central Coast.

There is much about Geoff Cameron’s house that cries ‘sustainability’. From the roof pitched just right for the array of 36 solar panels and the walls made from locally sourced hemp, to the wicking beds at the front and trellis on the deck flourishing with vegetables and vines, the house is solidly, proudly green. It’s fitting, given the home’s location in the Narara Ecovillage, nestled in a pretty wooded valley on the Central Coast of New South Wales.

Passionate about sustainability for many years, Geoff moved to the area from Sydney six years ago to help with the establishment of the ecovillage and is now head of the village water and sewer utility and active in the village community vegetable gardens.

An owner-built project, the house was designed by Geoff’s daughter Allison Earl and her husband Dean, partners at Earlx2 Architecture, and achieved an outstanding 8.8-Star NatHERS energy rating. “It’s the first time I’ve built anything myself,” Geoff says happily. “It took a year and a half, which is a fairly leisurely pace, and I learnt as I went along.” He sought advice from builders, tradespeople and sustainability experts along the way, but the most fun part of the build was when he hosted a group of volunteers to help him construct the hempcrete walls of the house. “We put out a call on the ecovillage social media and there were ten volunteers. All I had to do was feed them and supply the materials. It was just brilliant,” he says. 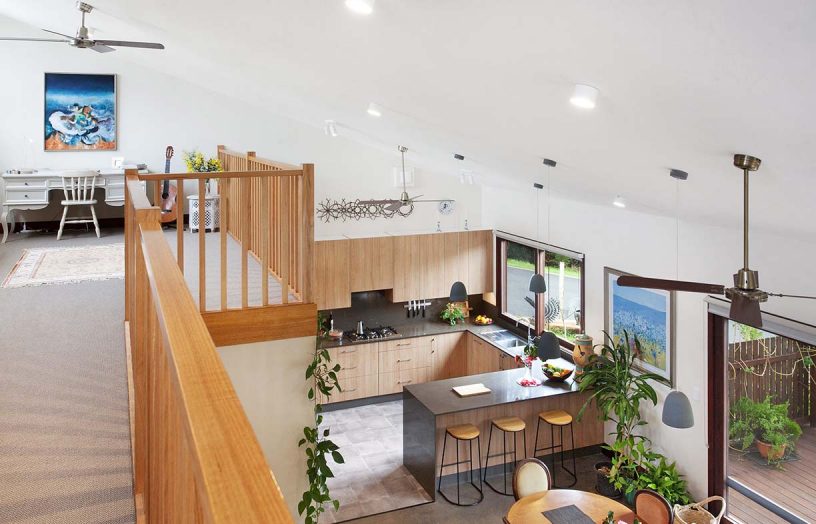 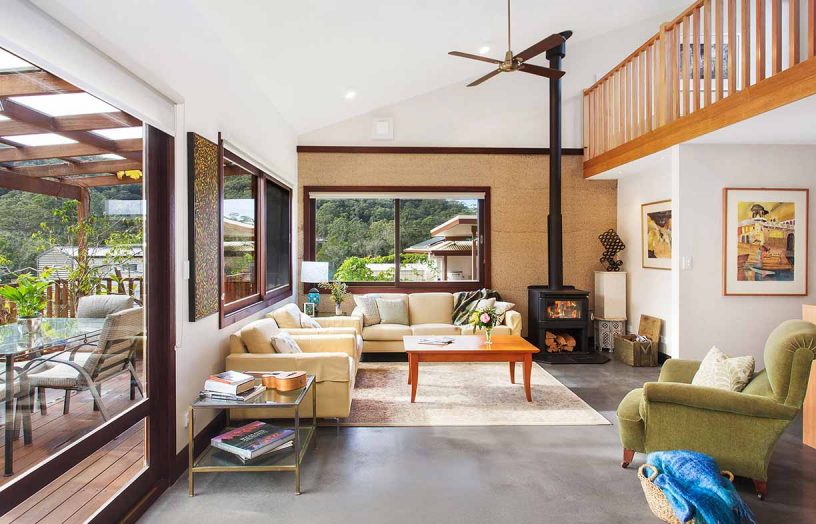 Inside, some hempcrete walls were left exposed and unrendered for a lovely natural look. A mezzanine level sits above the bedrooms and provides space for a study or retreat. “The whole project has been an experiment, but I’m absolutely delighted with the outcome,” says Geoff, who built the house himself. “It looks and feels great.”

Hempcrete was an obvious choice for Geoff, for its excellent insulative properties and its attractive textured look when left unrendered inside the house. A very fast growing renewable material that sequesters a large amount of carbon as it grows, the hemp for Geoff’s house came from Dungog in the Hunter Valley and the binder for the hempcrete came from a company based in Lismore.

Allison and Dean, whose practice focuses on low environmental impact and low embodied energy homes, were more than happy with the choice of building material: “Being located in an ecovillage it made sense to push the boundaries, and the extra requirements of the bushfire regulations (the site has a BAL-29 rating) almost seemed to encourage the use of hempcrete,” Allison says. “The texture and warm feel of the material is suitable for the bush locale.” 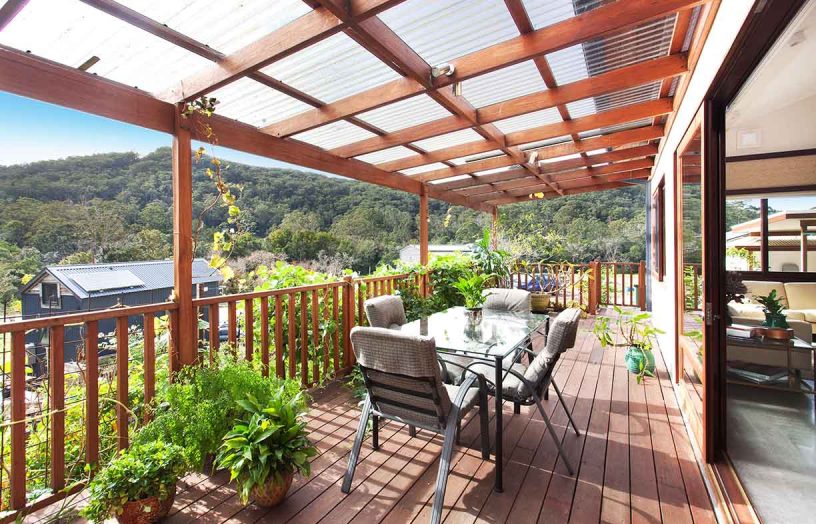 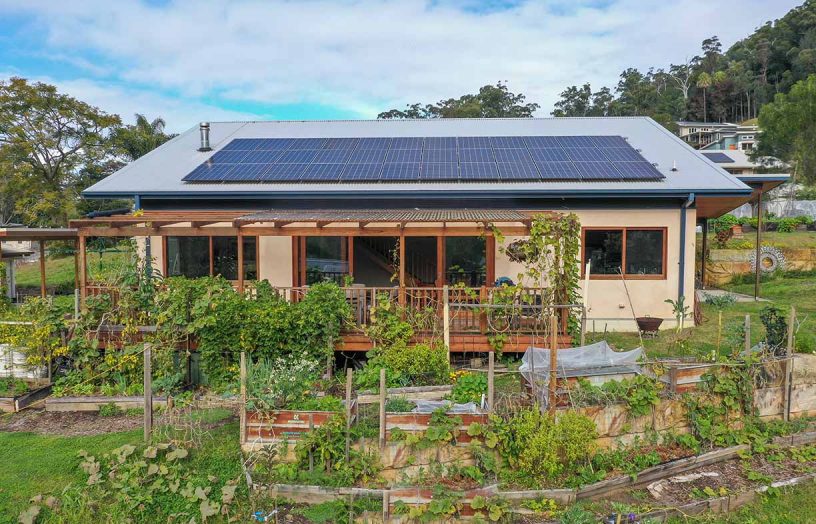 The living area opens onto a large deck with great views across the ecovillage.

The floor plan of Geoff’s house was kept to a simple rectangle for economy and ease of construction by a novice owner-builder, but also to minimise the surface area to volume ratio and thus increase thermal efficiency. Facing due north, it makes full use of passive solar design. With the help of the carefully sized and positioned northern eave and windows, the perimeter-insulated concrete slab floor receives full sunlight in winter and none at the height of summer.

The positioning of windows – including clerestory windows on the south side of the house – creates a chimney effect that allows warm air to escape naturally in summer, and no active cooling is needed beyond ceiling fans. And when open windows are not desirable, two pairs of decentralised mechanical ventilation with heat recovery (MVHR) units in the east and west walls mean the house can be ventilated efficiently without thermal compromise. All windows and external doors are double-glazed with FSC-certified red gum frames made in the Blue Mountains; to maximise thermal efficiency there are no windows on the western side of the house, something that the council initially rejected on aesthetic grounds but was eventually persuaded to approve. 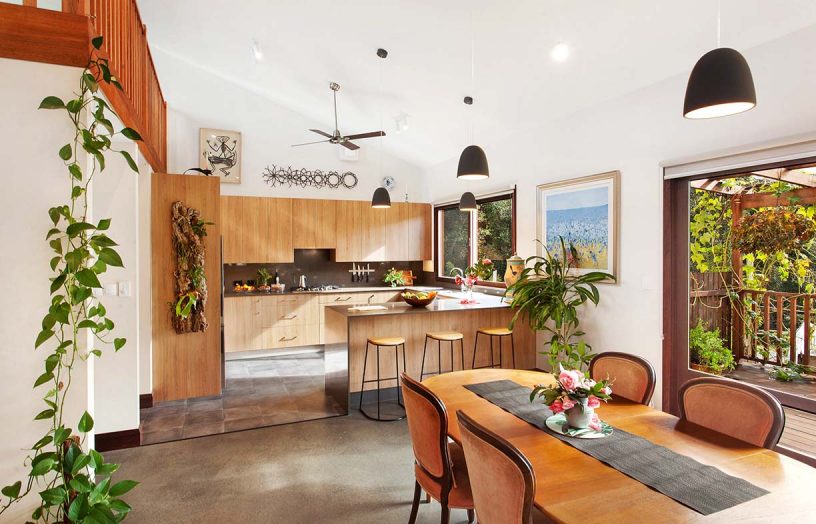 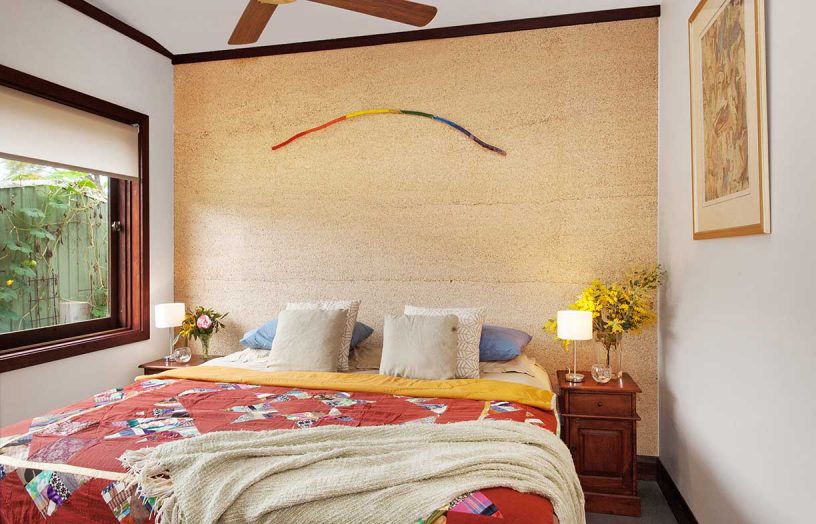 From the entry, a central hallway lined with storage grants access to the three bedrooms positioned on the south side of the house. The main bedroom has a walk-in robe which is designed to be converted to a fourth bedroom if needed. A single space containing the kitchen, dining and living area is to the north, and stairs lead to a mezzanine level above the bedrooms with a study or parents’ retreat.

And then there’s the roof. Designed for optimising solar generation, it currently supports an 11-kilowatt solar system but can fit a larger one. Around 75 per cent of the annual generation is exported to the ecovillage’s smart grid. “We have our own electricity network in the village and we’re also the energy retailer,” Geoff says. “Every house in the village is a net exporter over the year and the village itself is a net exporter to the outside grid. At the moment we’re waiting for a big, 437 kilowatt-hour battery to arrive which will be the heart of the smart grid and will mean that the village will effectively be functioning as a power station.”

So, what’s it like to live in Geoff’s hemp house? He’s looking forward to moving in soon; currently it is being rented to his friends John and Megan and their young son while they complete their own home in the village. John has made full use of the wicking beds and the trellis on the front deck, growing vegetables and climbing beans. He’s impressed with the finished home: “It’s just great living in a house where you know that the materials surrounding you have been thoughtfully sourced and the owner has considered carefully every move he has made.” 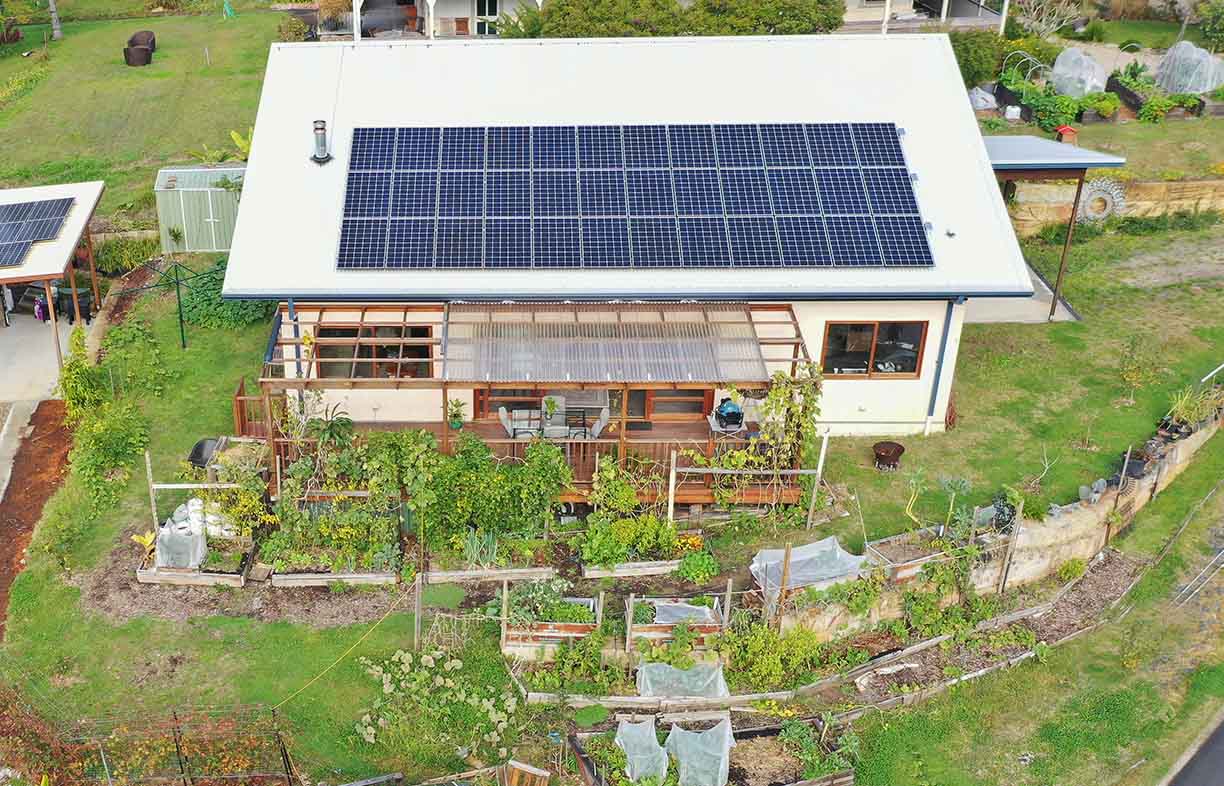