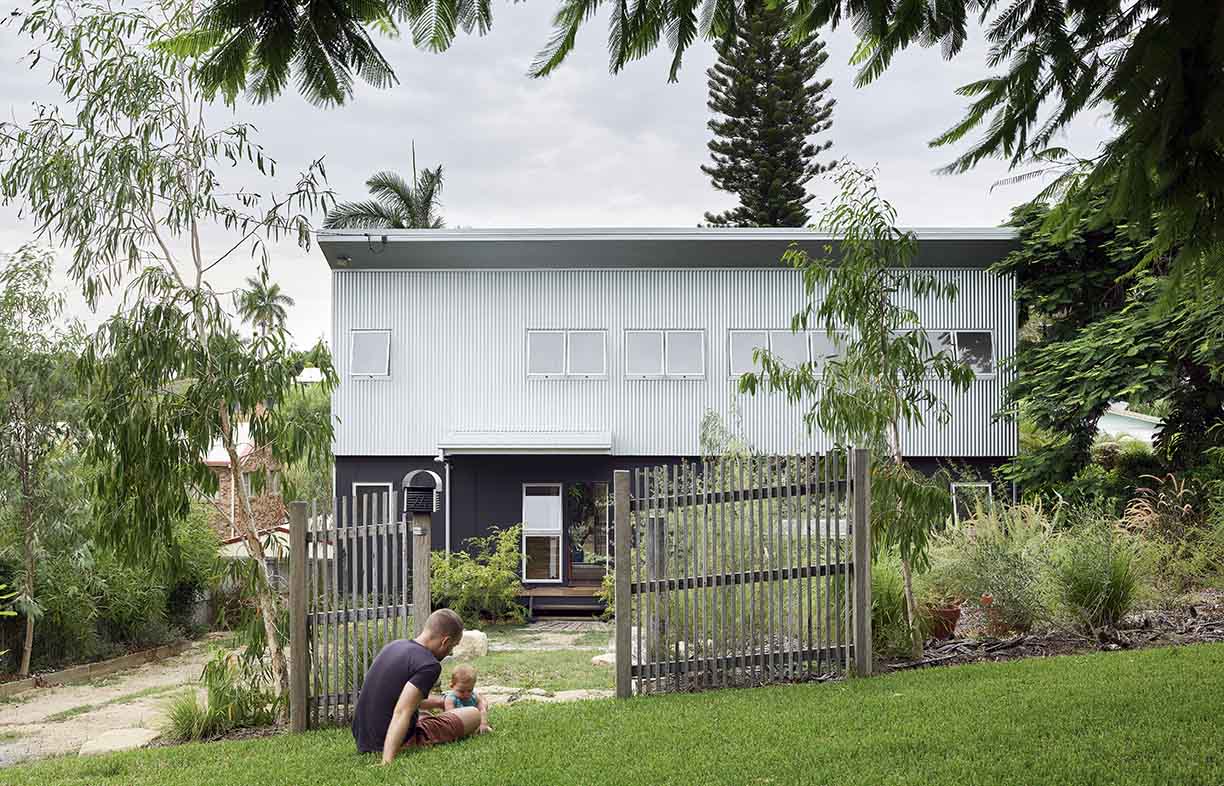 The house is settled into the slope below footpath level so the lower floor is close to the ground, reducing its overall bulk and ensuring living spaces are well connected with the surroundings.

In subtropical Rockhampton, this family are enjoying their sustainable, low-maintenance home built on a tight budget.

Nestled on the hillside just below Rockhampton Hospital in central Queensland is a modest and immediately appealing new family home, built on the site of a house destroyed by Cyclone Marcia in 2015. The Veenstra family bought the block within a week of it going on the market, attracted by the expansive north-sloping land and established trees. They wanted to build a sustainable, low-maintenance home for their young family that reflected and facilitated their love of the outdoors, and collaborated with architect Colin Strydom of Design+Architecture “to get the best out of a low budget and also out of the awesome backyard,” as Colin recalls. 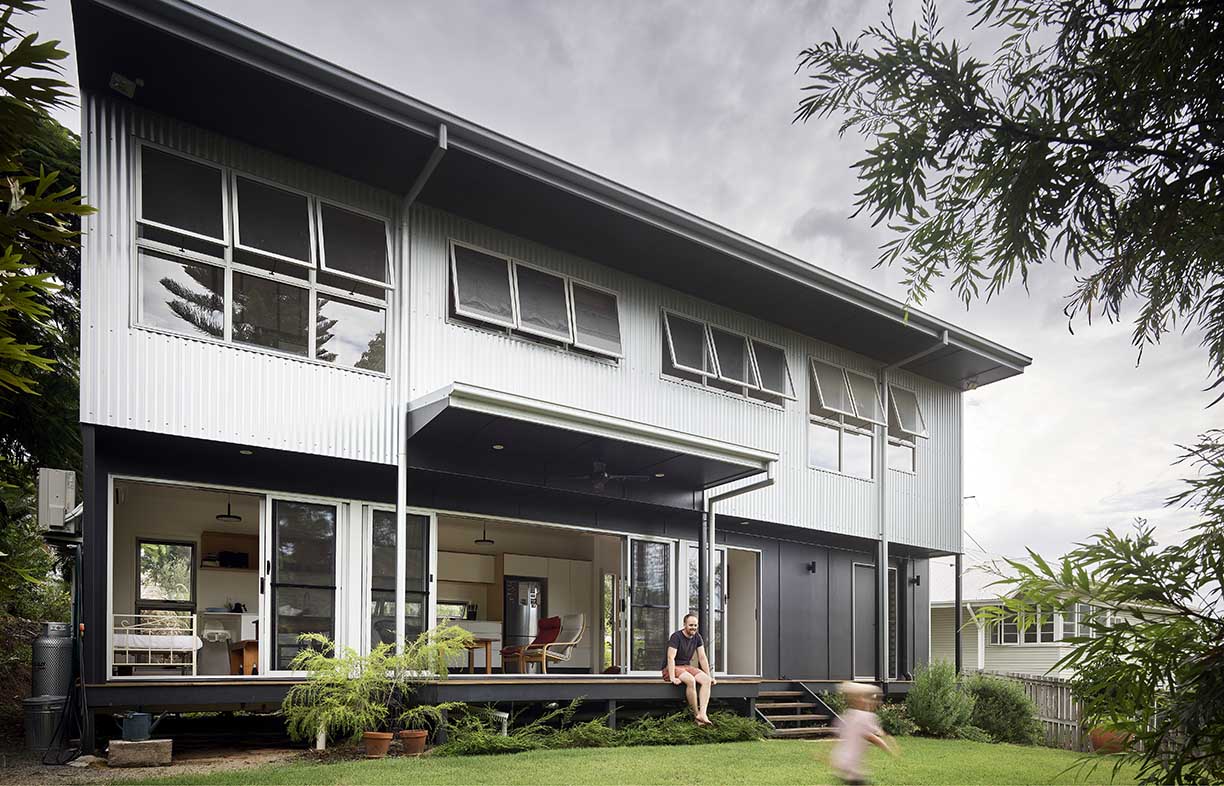 Low-maintenance Zincalume cladding was used on the upper storey and painted fibre cement panels were installed on the ground level.

The Veenstras and Colin initially designed a series of single-storey pavilions stepping down the slope, but the first costing of $400,000 for the build was beyond their strict budget. Fortunately, they had established a relationship with builder Mitch McDouall of Acute Builders early in the design process, so architect, clients and builder worked together to nut out cost-saving ideas. Interestingly, the preconception that a single-storey build is more economical than building up didn’t hold true for this project, partly due to the sloping site. Significant savings were made by consolidating the home into a simple, rectilinear two-storey building, reducing roof area, scaffolding, external walls and structural tie-downs. “Because of cyclonic ratings here in Rocky, by the time we put tie-downs in single-storey houses, it’s almost the same work and cost as for a double-storey build on the same footprint,” says Colin. “If you can keep your footprint small, your footings and structure cost less.” Impressively, the new design shaved 25 per cent off the build cost while fulfilling the same brief for a three-bedroom, 1.5-bathroom house. 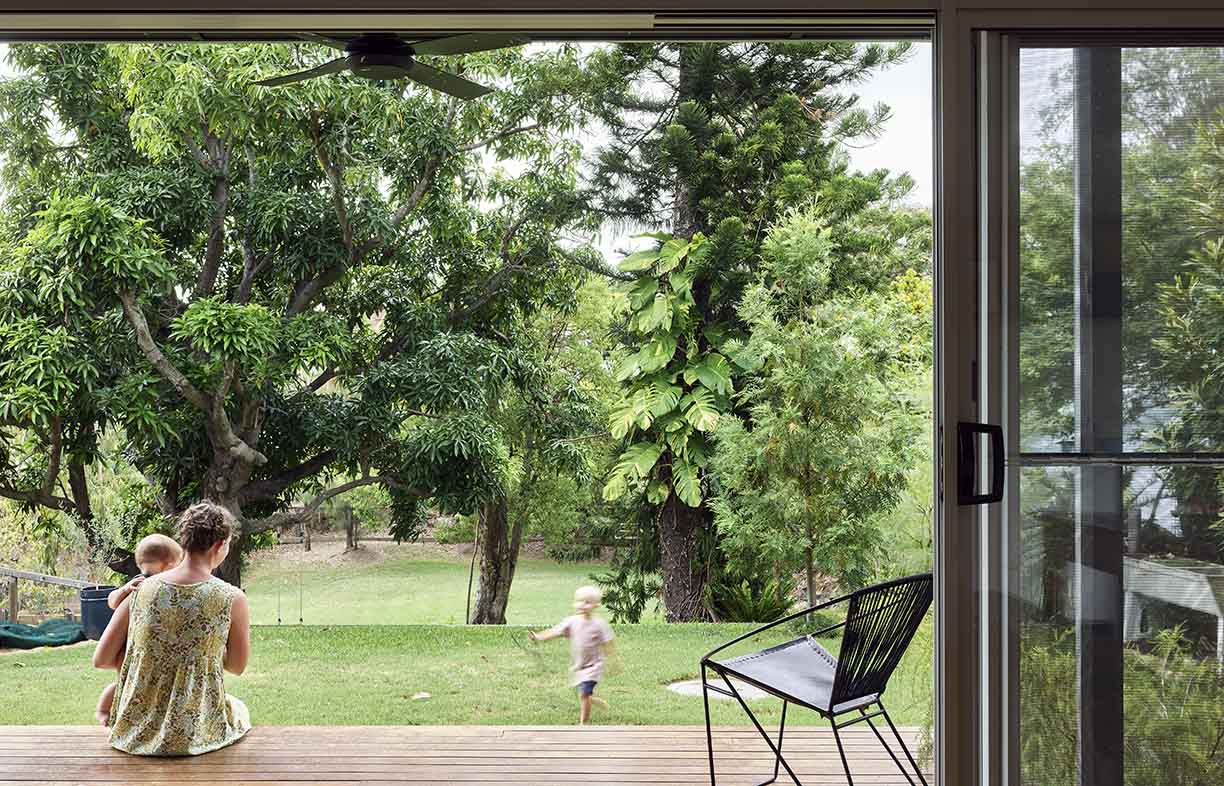 The expansive site had been protected from development by the sewer and stormwater easements running across the northern end – perfect for the outdoors-loving family, who designed the house to make the most of the large backyard.

Having travelled extensively and become accustomed to using minimal space wisely, the family wanted their first home to be modest in size and to have a natural, rural feel. Maximising connection with the garden was far more important than large rooms and a big deck. All rooms are sized as compactly as possible, modelled on inspiring smaller homes they’d seen including DAA’s Easterbrook House in New Zealand. The rear deck is just the right size, designed to be functional while still minimising separation between the internal spaces and the garden and reducing build cost and ongoing maintenance.

“The site was perfectly aligned from the start, with a north-facing slope,” says Colin. The long, shallow floor plan runs east-west along the contours, with most glazing to the north and just enough windows to the south to provide cross ventilation and some visual connection to passers-by on the street. As works well in the subtropics, the upper floor overhangs the lower to give protection and shading to openings and walls below, and the ‘hat’ at the top has a wide brim to shelter the bedroom level. By setting the house close to the ground to reduce its overall bulk, the living spaces are well connected with the surroundings and visually and physically obstructive balustrading wasn’t required to the deck edge, further simplifying the build. 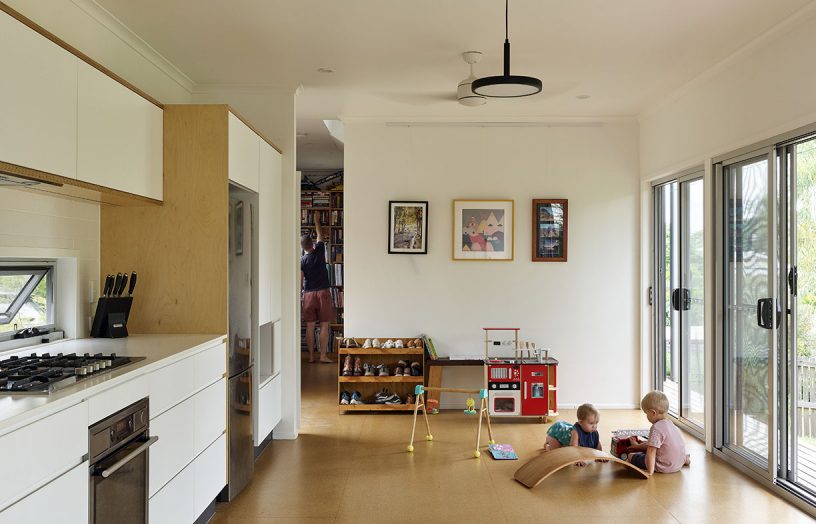 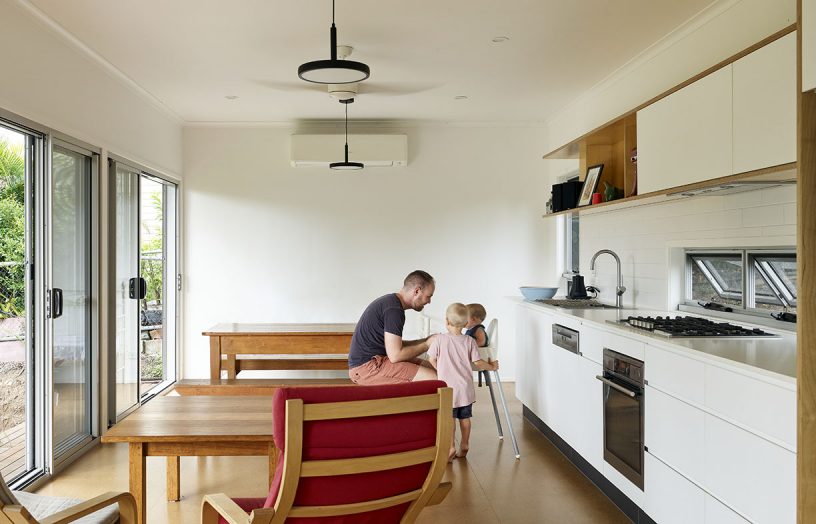 Downstairs, the building is only four metres wide but feels more generous due to the expansive openings to the north.

Building materials were chosen using three criteria: “environmental sustainability, low maintenance and cost-effectiveness,” lists Colin. The originally desired polished concrete for the downstairs floor was prohibitively expensive so was changed to clear-finished particleboard typically used as a subfloor. “It was what we wanted from the start for upstairs,” say the homeowners.

Readily recyclable aluminium-framed doors and windows are basic, in standard sizes for cost reasons. Simple sliding doors were used downstairs instead of more costly bi-fold doors, which are also difficult to fit with insect screens. Originally louvres were the desired window type to optimise cross ventilation, but budget constraints meant they were changed to awning windows. “They still let lots of light in and the family doesn’t have to worry about closing the windows when it rains,” Colin says. The upper floor is clad in Zincalume, a cost-effective solution not only in terms of its purchase price but also over its lifetime as it does not require repainting. Downstairs, where access is easier, painted finishes were used.

While there were many clever cost savings, there were some things the Veenstras didn’t compromise on. For a start, the location of their home site and access to green space, sunshine and breezes was essential, and to optimise this, they did not scrimp on the extensive glazing facing north to the garden. The family enjoy cooking and wanted high quality kitchen cabinetry that would last and be a pleasure to use, and investment in tapware, used every day, was also seen as worthwhile.

The completed home sits happily in its green surroundings, occupying only 75 square metres and preserving an enormous garden to play in. The family love the afternoons sitting on the deck, gazing into their lush backyard and soaking up the breezes. “We enjoy how it feels. It’s what we wanted and it is really spot on,” they say. 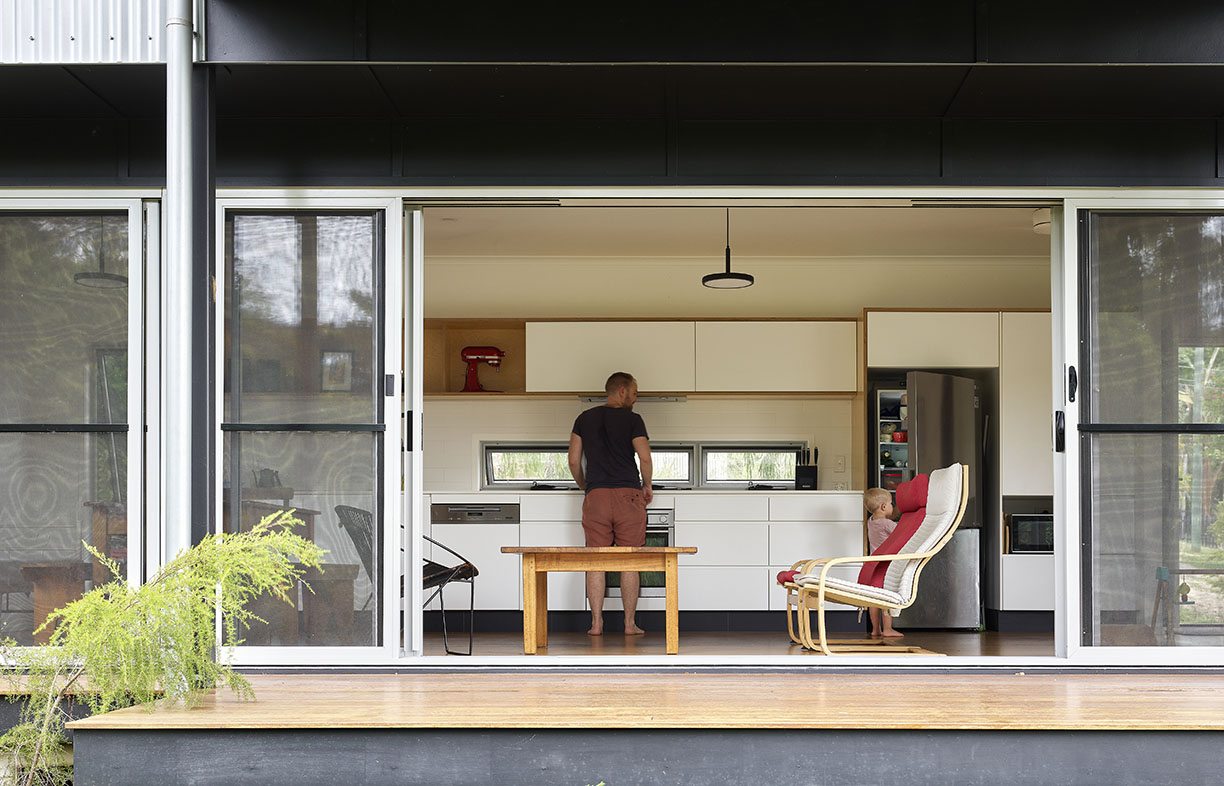