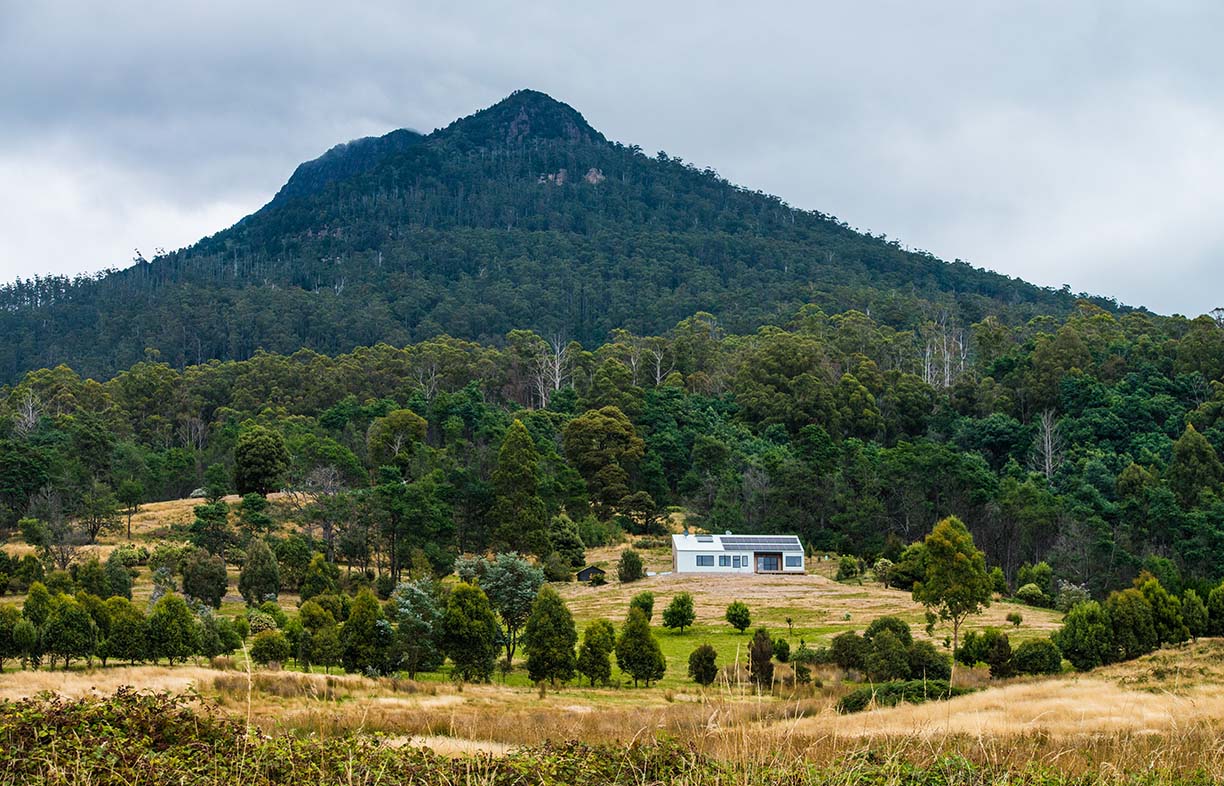 When was the last time you had a conversation about a home being ‘just enough’, or suiting someone’s needs rather than their wants? As a nation still building some of the world’s largest homes (236 square metres on average) and carrying the second highest rates of housing debt (just behind Switzerland), it would seem that we’re not having these conversations nearly enough.

But there are certainly homeowners and designers out there doing things differently. ‘Enoughness’ was a large part of the focus for former Brisbanites Bronwyn and Brad Platz when they decided to build on their four hectares of bucolic countryside nestled under Quamby Bluff in northern Tasmania. 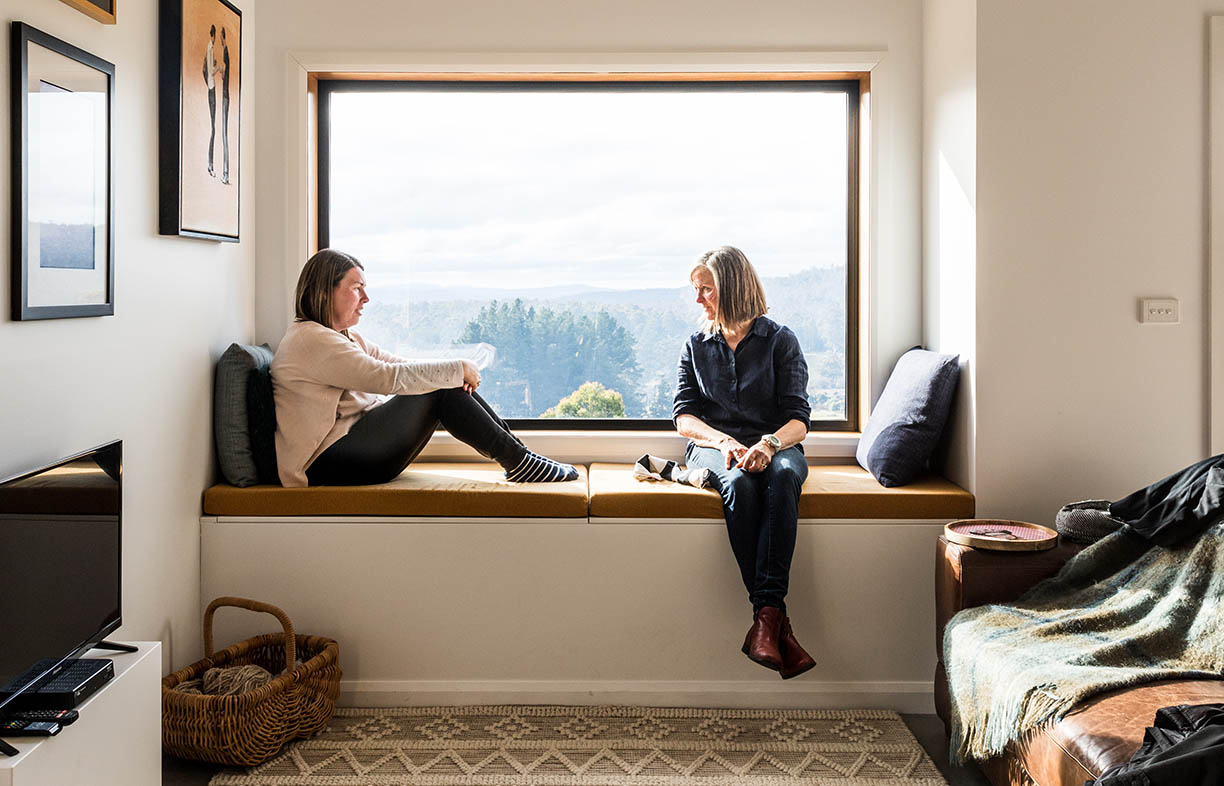 Holidays spent hiking and cycle-touring in the island state had generated a desire to live closer to nature and a dream of relocating there; when Brad found their property online, the dream became reality. After a year of living in the existing cottage on the block and having a go at self-designing a new home, Bronwyn and Brad approached Jane Hilliard at Hobart-based architecture practice Designful. “We knew we wanted an energy-efficient home but were having trouble with the passive solar elements,” says Bronwyn. “In the end, we were really happy to have a professional design. We were surprised by many of the elements the architects included.”

The couple loved Designful’s sustainably holistic approach based around “humble and honest” designs aimed at matching expectations and budgets and delivering great liveability. And the appreciation was mutual. “Brad and Bronwyn were great clients because they were on the same page as us from the start,” says Jane, who made the trip across the island several times for site visits. “They came to us with clear values, which made it easy for us all to arrive at the same expectations and idea of what was enough.” 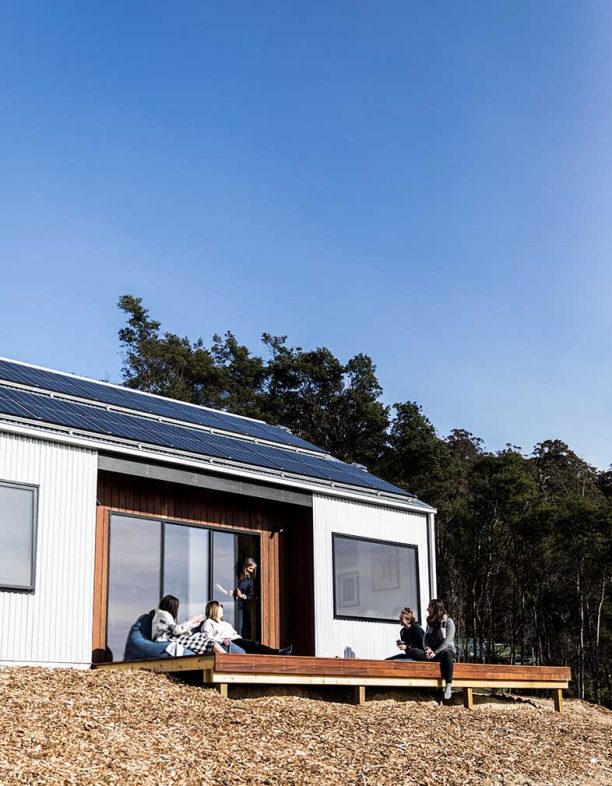 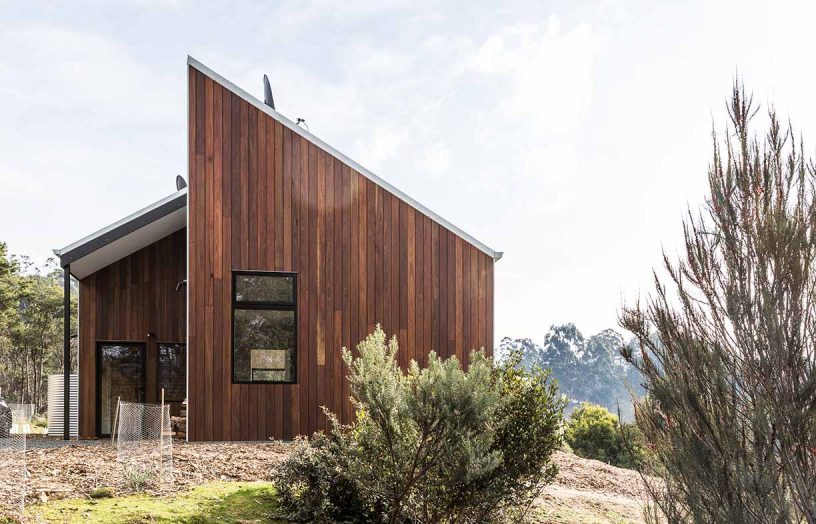 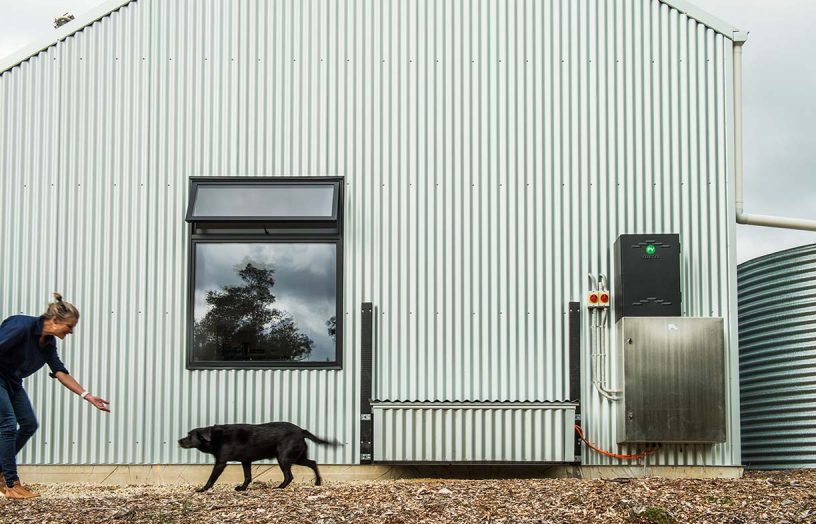 Double-glazed sliding doors open onto a sunny, north-facing deck with expansive views. The house has a wood-burning stove for winter warmth, and is otherwise entirely powered by the off-grid solar PV system with battery storage.

With the cottage and a shed (converted into a studio) already on site, providing guest beds for ten, Bronwyn and Brad knew from the outset that their new home would only have one bedroom. “We wanted a home that would be simple but significant, and compact enough to be vacuumed from one power point,” says Bronwyn.

At 97 square metres and “pared back to the essentials”, the home Jane designed with Bronwyn and Brad doesn’t feel at all small or like a budget build, despite the design, project planning and construction all being focused on eliminating extra expense, allowing for a very reasonable and efficient end cost. The combined kitchen and living area features a built-in window seat and a study nook and opens onto a north-facing deck. The single bedroom also faces north, and there is just one bathroom; the laundry shares space with a pantry off the kitchen.

Reflecting the classic Tasmanian ‘shed and shack’ vernacular, the home is clad in a combination of vertically mounted corrugated Zincalume and spotted gum. Complementing the surroundings, the interior design and palette of materials are simple and refined, creating a generosity of space and selective richness. Careful orientation and strategically placed windows enhance passive solar efficiency, provide cross ventilation and, importantly, frame views to the surrounding hills, bush and rolling paddocks. 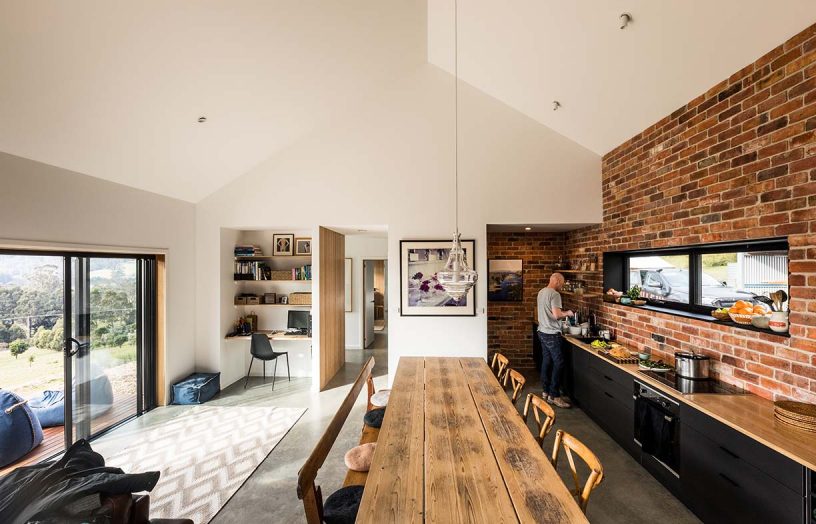 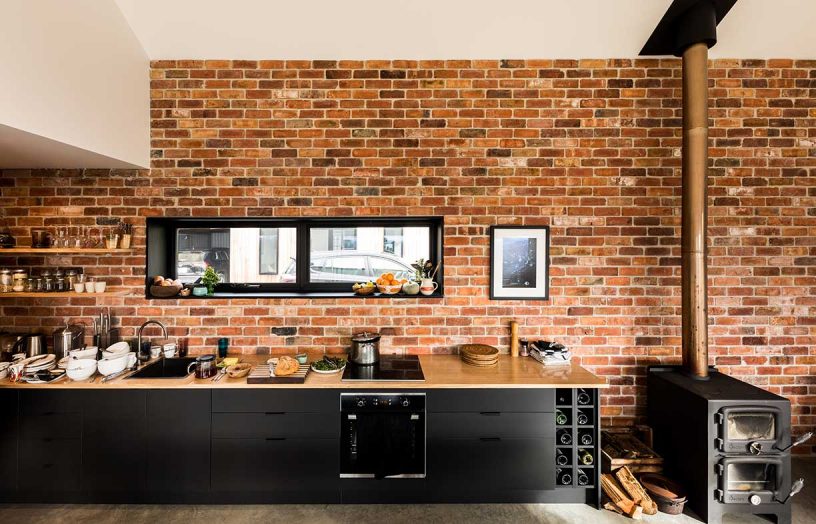 The small house has a single living space with a built-in desk and an inviting window seat, and just one bedroom. “Paring back is liberating, as long as you have places for the things you use all the time,” says homeowner Bronwyn.

Although it’s situated only 12 kilometres from the major country town of Deloraine, the house is off-grid with a 6.6-kilowatt solar PV system and batteries. Hot water is produced by an evacuated tube solar thermal system, boosted by a wetback connected to the small wood-fired stove and by the solar electricity when the fire is not in use. Two 10,000-litre rainwater tanks capture the region’s abundant rainfall.

It’s the passive solar design features, however, that really contribute to the comfort and liveability of the home for the couple, despite it being perched on the side of a Tasmanian mountain in an area subject to winter snowfalls. North-facing double-glazed windows, good insulation and the thermal mass of the insulated concrete slab and internal recycled brickwork mean that the house remains at a comfortable temperature with only minimal use of the wood heater required. “Our first year spent in the cottage here was freezing,” says Bronwyn. “We moved into the new house during winter and it was so lovely. Even when it’s cold outside we don’t have to put the fire on much at all.”

Jane says that Designful’s approach to energy efficiency and sustainability is based around balance: “We believe that the core of sustainability is in finding the right balance between values, size, resource use, environmental impact, financial impact and wellbeing.” Balance could be seen as another term for the ‘enoughness’ that the Designful team espouses and that they’ve brought to Bronwyn and Brad’s retreat.

“Enoughness is a consideration of your impact on the environment and also of what’s enough for you personally to live a happy life,” says Jane. She laments that in Australia we are bombarded with the idea of the ‘dream home’, “when most of us really just want a ‘dream lifestyle’ – after all a house is just a vessel for life to happen in,” she explains. “It would be very refreshing to see our mainstream media actually showing people modest projects that are achievable and attainable. Many people just don’t know that there are alternative paths.” 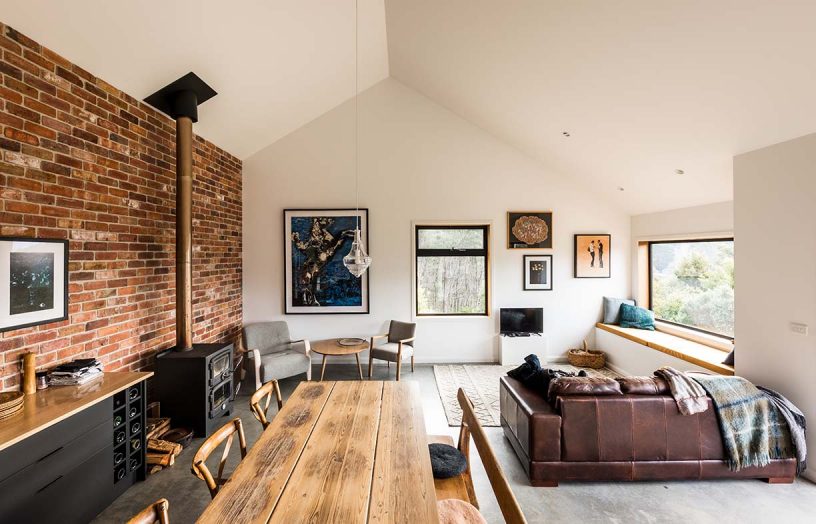 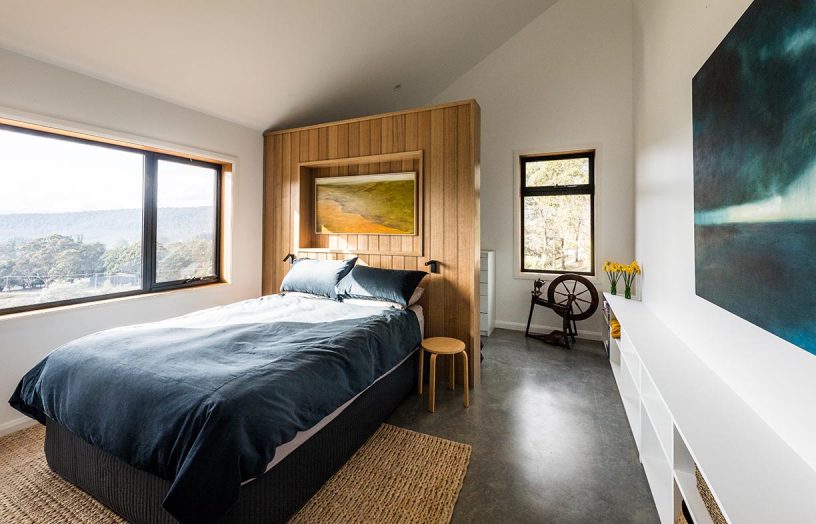 Bronwyn and Brad have found what they were looking for. They now live comfortably, surrounded by nature in a one-bedroom home that boasts a dining table for ten. Bronwyn has her woodturning workshop set up in a room behind the studio and Brad has the touring bicycles ready for their next Tasmanian adventure. Sounds just about the right amount of enough.

“The design, project planning and construction for the house was done in a way that always sought to eliminate extra cost, allowing it to come in at a very reasonable end price. The build was project managed by Brad, and he and Bronwyn devoted a solid six months’ focus to limiting spending. In particular, there were a number of contractors that Brad took time sourcing, organising and building relationships with. If it had been built using a more conventional approach it would have cost a lot more – and even since the home was built, building prices in the area have risen by at least 20 per cent.”