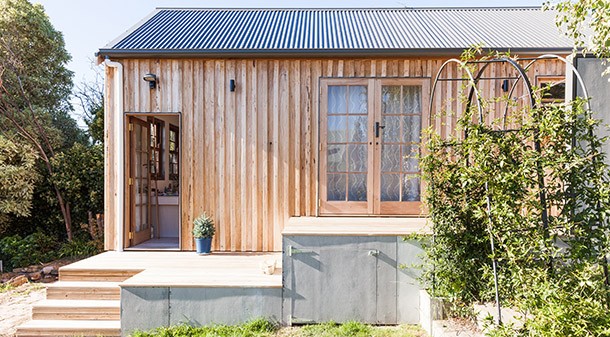 The modest floor area of the shack is complemented by a big deck and under-deck storage. For the cladding, raw fibre-cement sheet and radially sawn silvertop ash were chosen. The timber was left raw to minimise maintenance, and will weather to grey. 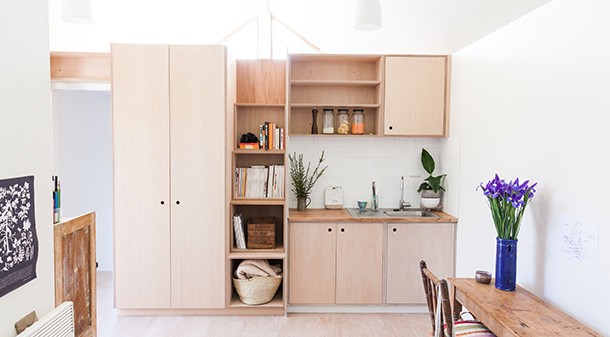 The kitchenette joinery is plywood sealed with a low-VOC Cutek finish. Look closely and you’ll see a stairway to the loft cleverly integrated into the kitchen shelving. 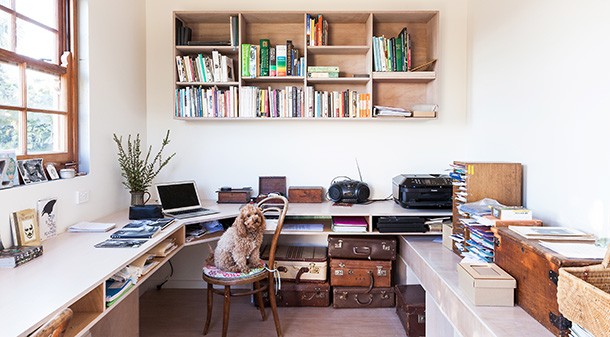 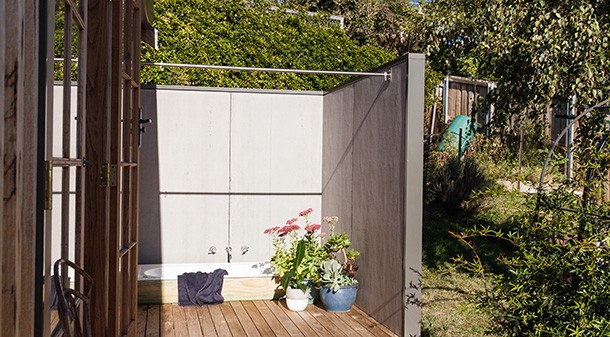 The outdoor bath, acquired for a song on Gumtree, provides a bit of ‘shacky’ luxury. It’s well insulated so it stays warm even on a cool night. 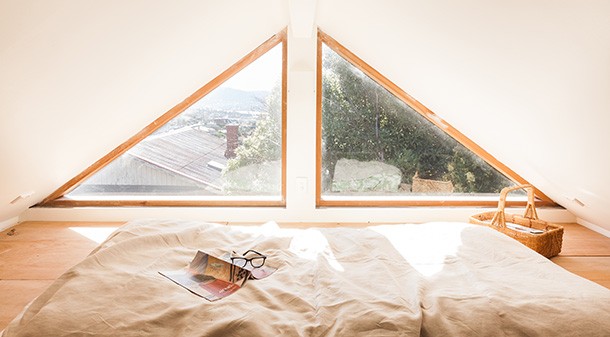 A backyard studio ‘shack’ was the ideal way to create more living space without compromising an otherwise perfect Tasmanian home.

When editor and writer Amanda Ducker’s family was outgrowing their 1920s Federation bungalow in the genteel suburb of West Hobart, an extension wouldn’t do. The family considered an addition, or going up, but they loved their original, history-steeped Tasmanian home and wanted to keep its integrity. Set on a 620-square-metre hillside block, the property had ample room in the backyard – and so the idea of building a small, separate studio was born.

“In Tasmania, there’s a very well established shack culture, and we wanted to have one in the backyard,” says Amanda. That meant building small, re-using where possible, and, for Amanda and family, blending the informal ‘shack’ vernacular with a calm, Scandinavian sensibility. Amanda found Jane Hilliard of Designful in Hobart, a practice that specialises in environmentally sound small builds, and a like-minded partnership began.

“A lot of the brief was about the feel of the place, and how Amanda’s family wanted to live in it,” says Jane. Amanda wanted a writing studio and a living space for her eldest daughter, Zia, a university student. There would be a compact bedroom and bathroom, a separate study to share, a wide deck, and in keeping with a ‘shacky’ feel, an outdoor bath. It would also need to be a building that did not cost too much to build or run.

Jane has extensive experience designing compact buildings, and could recognise an opportunity to develop something aesthetically lovely and environmentally sound. “The main thing for me is that if a building is small and simple, and uses a reduced palette of materials, sourced locally, it already has good environmental credentials,” Jane says.

These credentials were added to with copious insulation in the roof, floor, ceiling and walls, to keep the north-orientated studio warm in the cold Tasmanian winters. The building was also designed to specific spans in order to reduce wastage of materials; LED lighting reduces energy consumption. The honey-coloured exterior cladding is plantation timber, and there’s a recycled kitchen benchtop in the kitchenette. Amanda’s recycled pièce de résistance is the outdoor bath. “I bought it for $70 off Gumtree, and we have insulated it, so it stays really warm even on a cold night,” she says.

In order to give this 33.5-square-metre space a sense of neatness and order, the studio is big on storage. Attractive marine ply joinery is built along the wall that separates the living space from the work area, and every nook has a use, for example the clever book slots under the floor joists where the studio’s upper level meets the lower level. There is also additional storage space, which can serve as a temporary sleep-out, on a mezzanine level under the high peaked roof.

The studio has just the informal, Danish aesthetic that Amanda was after: natural timber tones, creamy-pale limed ply flooring, fresh, white walls inside; and outside, attractive grey fibre cement sheeting complemented by timber vertical boards, which will weather to grey. With the French doors open, a long, translucent curtain gently moves in the garden-scented air. “It’s been very successful,” says Amanda. “It’s light, airy and spacious. It feels clean and elegant, but with our vintage and antique furniture, it’s also informal.”

In terms of adding space to the house, the studio has also been a great success: Amanda’s family now has more room to breathe. The studio also functions, as planned, as a mother-daughter creative workspace. And, just occasionally, with family staying and for parties, it also comes into its own. “I think we once had 11 people staying in the house and studio combined,” says Amanda. “It worked just perfectly as a fun shack-at-home.”