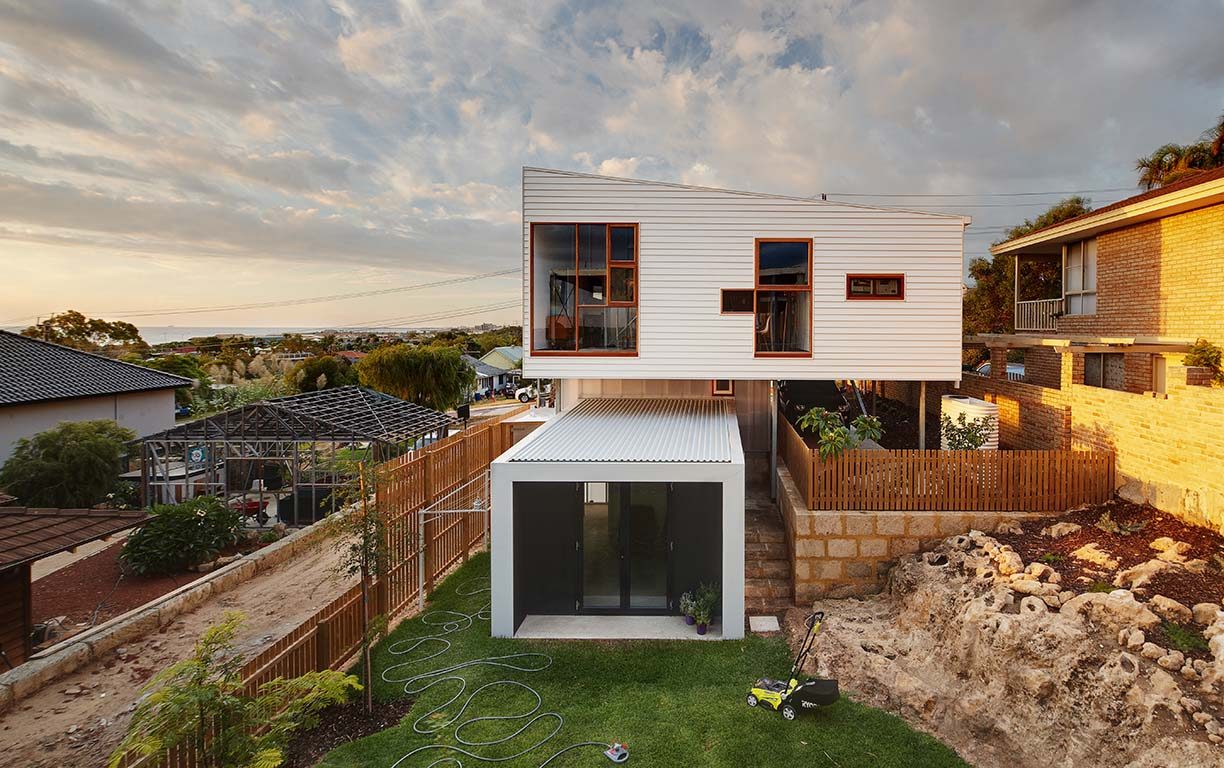 An elevated design was used to accommodate the existing topography, including the limestone outcrop. It also allowed for a multi-purpose room that opens to the garden.

In Perth’s beachside Coogee, where a trend towards ever-larger houses on shrinking lot sizes is the norm, this family home is a striking anomaly.

Rather than building a typical double-brick, two-storey home, Brett and Julia wanted a house that combined the lightweight, elevated characteristics of her North Queensland childhood home with the modest footprint and materials associated with the neighbourhood’s fast-disappearing beachside shacks.

“My husband is from Perth and I’m from Queensland, and we thought we’d buy a house and renovate in Fremantle, but it was the peak of the mining boom and everything was beyond our reach, so we decided to buy this block of land and build,” Julia Sillars recalls. “We used to ride our bikes and run through the area, and we found this land in the old part of Coogee; people are only just now realising how great the area is, with its proximity to the beach and Fremantle.”

The subdivided block was vacant after an earlier house had been demolished and the couple approached Brett’s childhood friend, architect Ross Brewin, who lives in Melbourne. He brought Perth-based architect David Barr onto the team.

“I like working with other people because it generates different ideas and it was a logical step on this project,” Ross says. “From the beginning, both of us were involved in all of the design and functional decisions all the way through, and I travelled over at key points, to meet with the clients and to help oversee work on site.”

Brett and Julia provided a well thought out brief, but admit to be being pleasantly surprised by the plans that Ross and David proposed. “We didn’t want a big house with masses of west-facing windows looking out to the ocean, which we’d have to cover with blinds and curtains when it became too sunny,” Julia says. “And we didn’t want to lump a big thing on the block that would take up all the land, because Brett wanted to get stuck into making a garden.” 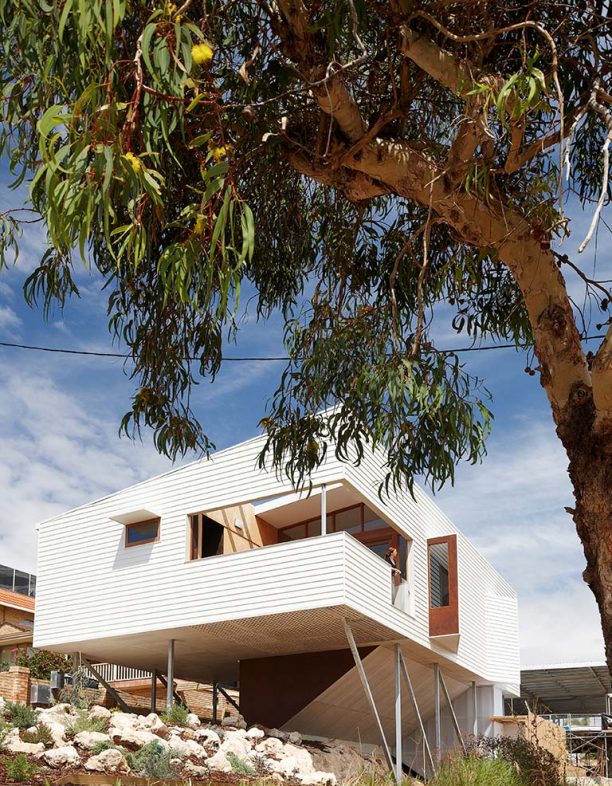 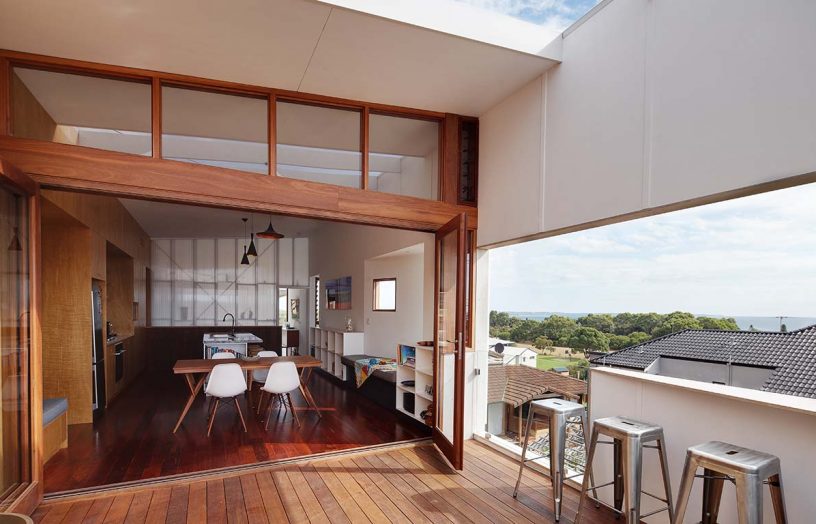 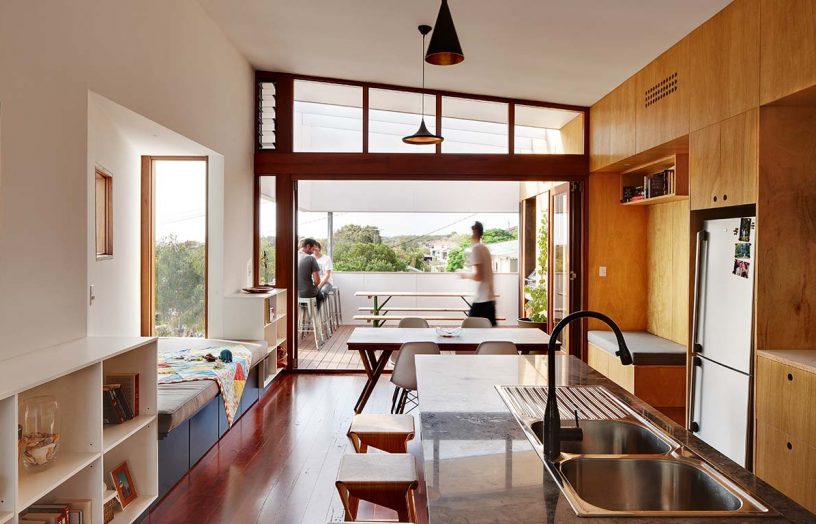 A semi-enclosed deck doubles as a bar with views west to the water. Shading this area ensures it’s usable year-round, even in the heat of summer. The kitchen and living area spills out onto the deck, and while compact is designed for everyday living.

Instead, the architects proposed a rectangular, elevated house sited near the front of the block to preserve the upper neighbours’ views and to maximise space for the backyard. The atypical beachside house is clad with a Colorbond steel product that resembles timber weatherboards, which was chosen for its low maintenance and coastal durability attributes.

Downstairs, a tandem carport – which doubles as a cool and shaded play area in the afternoon heat – sits beside a storeroom for bikes and kayaks, and a multi-purpose room and bathroom that accommodates family and visitors. This room opens to the garden, making it an ideal children’s playroom. Upstairs, a plywood spine – with windows at both ends – separates the bedrooms and bathrooms on the eastern side from the open-plan living area that faces west.

Throughout the house, carefully placed windows, some with Queenslander-style shade hoods and some that pop out from the walls, provide framed views of the Indian Ocean, while the enclosed deck at the northern end makes the most of the site’s elevated position.

The construction phase ran to schedule, although there were some unexpected cost overruns, Julia says. “From design to tender to building took about 18 months, and we avoided many of the usual challenging parts because we worked with the architects and they planned for those eventualities and met with the builders on site.

“One of our biggest challenges was the budget though, because, looking back, we were definitely building at the peak of the mining boom,” she says. “The steel foundation that was required to make it stand up to the wind – it was engineered so that even in massive winter storms, it didn’t shift at all – was expensive.”

Ross and David were focused on reducing construction costs throughout the entire design process. “Because the house is quite compact, we brought to the equation an ability to design things in a compact way but to still achieve a generous spatial quality,” Ross says. 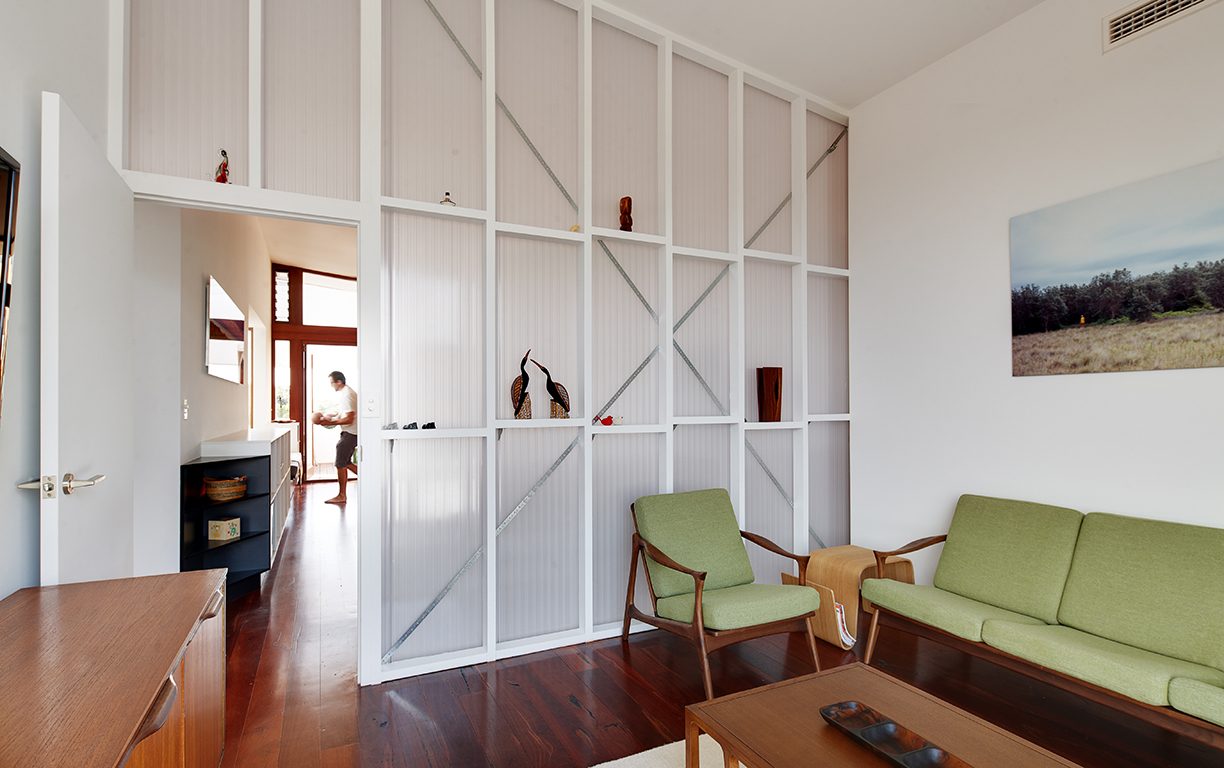 David adds that measures such as consolidating wet areas and using timber framing for floors, roof and walls helped to reduce the overall budget. “These economic decisions add up to a series of small wins that helped to maximise delight in the design,” he says. “We also used prefinished materials such as the plywood cabinetry, which reduces ongoing maintenance and speeds up the pace of construction, to save money upfront and over the long term.”

The team had to contend with two unexpected problems as construction commenced: asbestos and a limestone ridge were both discovered under the grass. “Finding the asbestos was stressful and it cost us additional funds to clean up,” Julia recalls. “And when we started the earthworks, we found the limestone ridge, but rather than excavating it out, Ross and David tweaked the design to work around it.”

“We were able to manipulate the plan to sit along the ridge,” David explains.

“Now, from the side view, you can see it cascading through the block,” Julia continues, “so while initially it presented as a potential problem, Brett was able to incorporate the limestone into the garden, with groundcovers and banksia.”

“We suggested to Brett that he could grow the garden under the house, and the garden is almost more radical than the house,” Ross says. “Brett used drought-resistant natives, which makes a lot of sense in that climate, and it sits very comfortably with the agenda of the house.” 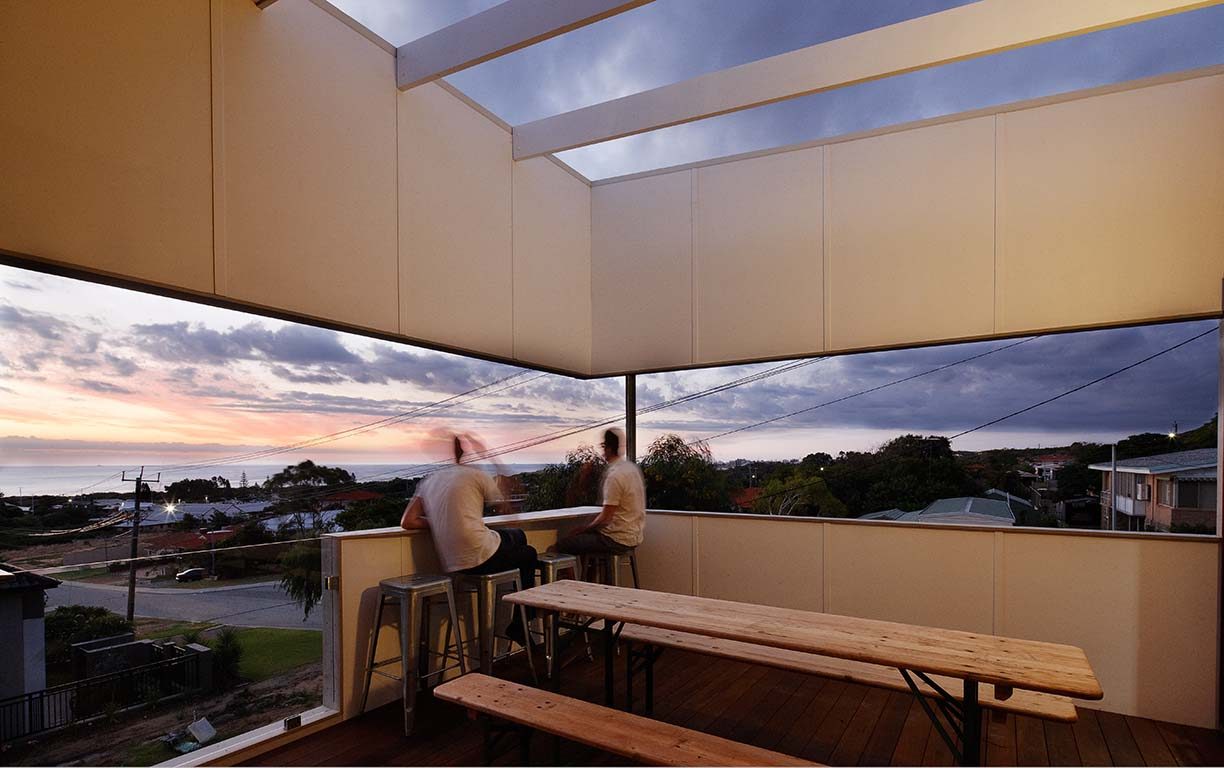 “Building the house gave us an immense feeling of pride,” says Julia. “Knowing that we built something so different on that street, which helped to show people that you can build something that ‘maximises the block,’ but in a different way, was very special.”

The house quickly became a talking point in the neighbourhood. “It’s a polarising house in that people either really liked it or really didn’t like it,” she says. “People slowed down all the time to look and comment, and one time, just after we moved in, a group of teenagers who were walking up from the beach called out: We love your house!”

“I feel like we left a legacy there, in that we showed that it’s possible to not build a massive house that takes up the whole block, using different materials, and to go outside the square a bit.”

To see the full house plans and specs purchase an issue of Sanctuary 48 at your local newsagent or subscribe here.