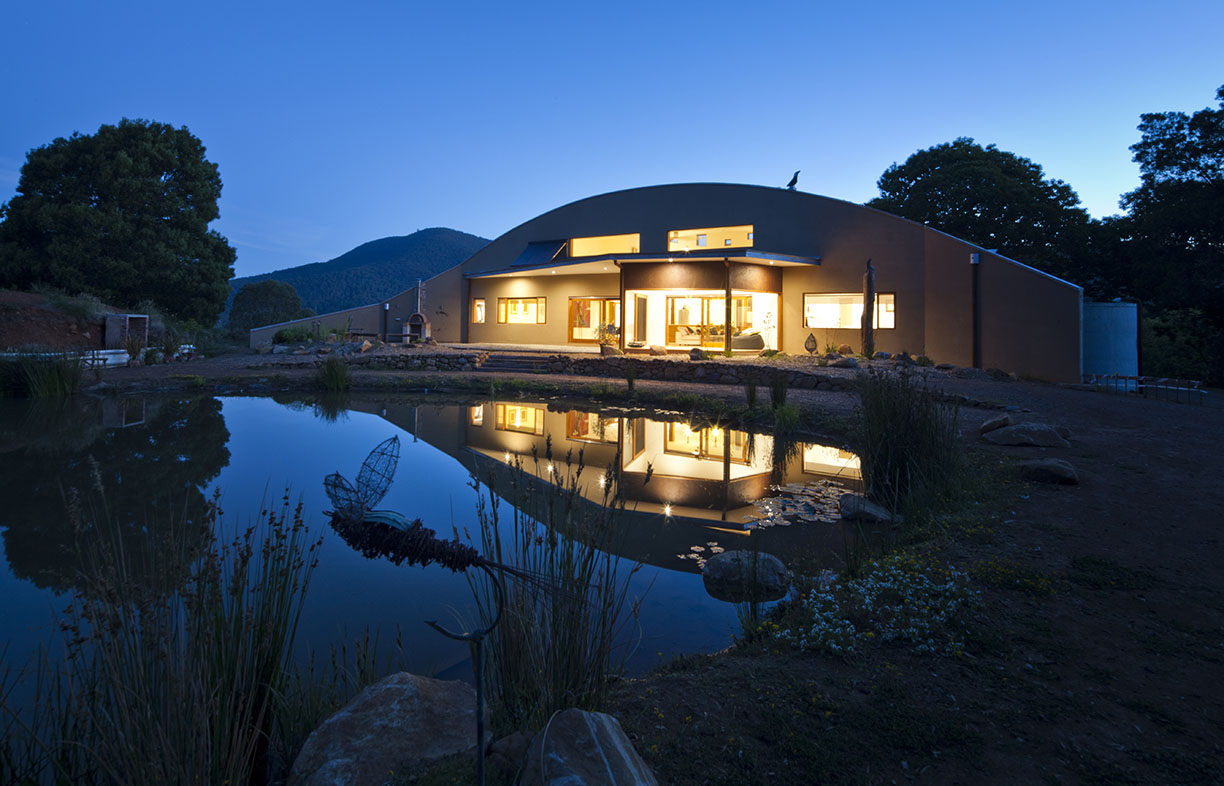 An earth-covered sustainable home pays homage to its surrounding environment.

On wet and wintry days in Victoria’s Yarra Ranges, a house has to be decidedly warm. But it’s the quality of warmth in this earth covered home that’s arresting – deep, yet gentle and soothing.

“The humidity doesn’t change, it doesn’t dry you out. It’s the most human heat,” says homeowner Tyrone Jasper.

The heat rises from the tiled floor thanks to a gas-powered hydronic slab heating system, and on this chilly day wood is also burning in the Cheminees Philippe fireplace. An enormous steel fan on the curved ceiling circulates air through the double height void in the living area.

The heating is just one of the striking things about this house in Warburton, east of Melbourne. From the outside there is the home’s distinctive curved shape, which pays homage to the contours of the surrounding hills. There’s an impressive earth-covered roof and a large pond at the back that continues the strong connection between home and environment.

Tyrone, a builder and craftsman, and his partner Hailey Cavill moved into the house, designed by Alvyn Williams of Soft Loud House Architects, in August 2012, after 18 months of construction. On a 1.4-hectare property overlooking the ranges, the home would provide country respite for Hailey – a social entrepreneur with a busy working life – allowing her to work from a home office with graceful, idyllic views. It would also provide a challenging project for Tyrone as an owner-builder and project manager committed to sustainable design.

Walking into the 7.3 energy star-rated house, an entryway opens into a large central living and kitchen area. North-facing double-glazed windows and doors bring plenty of light and open to a fully glazed sunroom designed for passive heating. Beyond the sunroom is the kidney-shaped pond, on the site of a disused concrete reservoir that once supplied water to Warburton – the couple employed a local contractor for the major job of breaking up the concrete. They then reused the concrete on their new driveway.

The living area is an opportunity to see Tyrone’s ingenuity and skill as a craftsman: the concrete kitchen benchtop is his creation and the stone for the fireplace was cut by hand with the help of his 80-year-old father, William. A prominent bookshelf was made from locally milled blackwood. 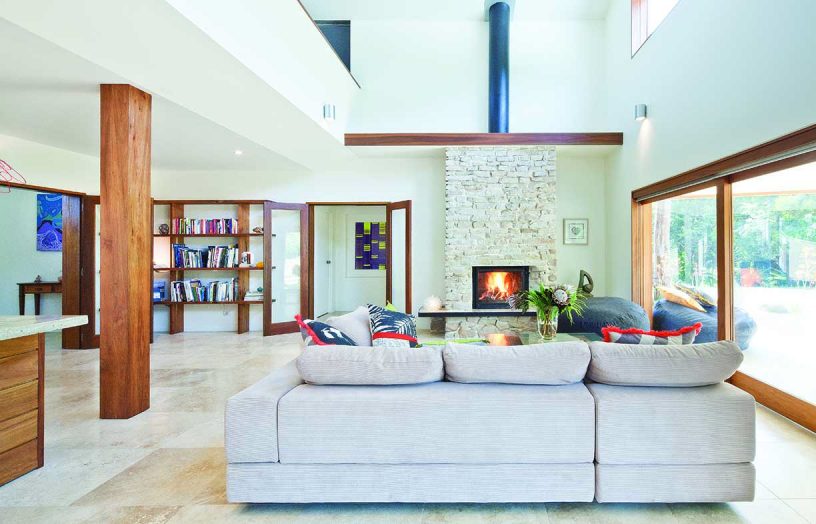 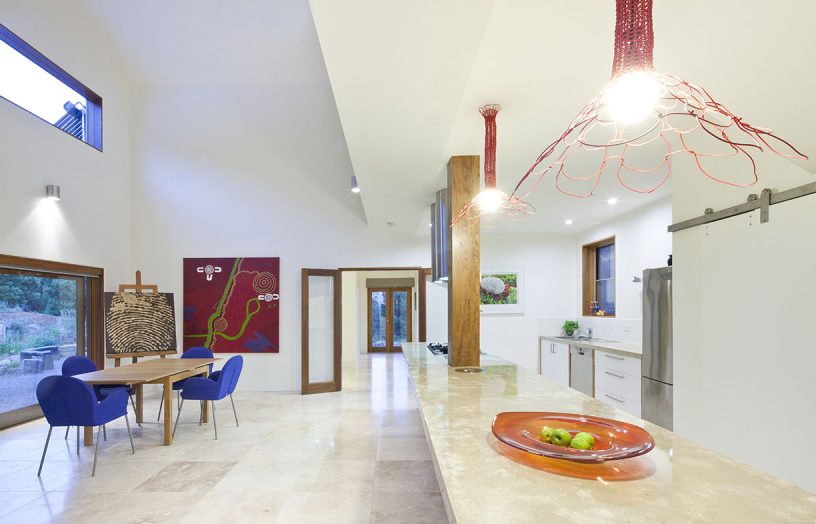 (Left) A wood-fired heater sits beneath a stone fireplace. Tyrone and his father hand-cut the stone before crafting the living room’s hearth. (Right) Tyrone crafted the kitchen’s polished concrete benchtop himself. The stainless steel rangehoods were sourced from Qasair and the designer pendant light shades from Volker Haug. Salvaged blackwood was used for the bookshelf and lines the kitchen bench.

At one end, the rectangular living-kitchen area opens to the main bedroom and ensuite bathroom. Here the roof has been designed to be open to allow a majestic view of the rising moon from the window above the bath. At the other end of the house is Hailey’s office space, with two work rooms and a large storage area. A stairway from the living area leads to a landing with a laundry and toilet and then to a mezzanine level, where a bedroom and TV room have been designed for guests.

There’s much about the 215 square metre home that is atypical, even novel. Concrete-filled polystyrene blocks were chosen as the home’s main structure – the fully constructed  polystyrene was up in a few days, with the concrete poured into the walls on-site. “It was incredibly fast to put up and it’s great insulation,” Tyrone says. As a waste product from the petroleum industry, Tyrone believes polystyrene has environmental credentials.

The green roof is perhaps the home’s most outstanding feature. Steel rafters spanning across one large curved central beam act as the spine upon which the plywood roof sits. The wood was sprayed with synthetic neoprene rubber, a resilient water-resistant material.

Above this, several layers of geotextiles help stabilise and provide drainage for the roof. Lastly, plastic webbing acts as a container for the soil and the plants in it. Eight tonnes of earth sit on the roof, with a green carpet of 4500 native grasses planted into it.

“I always wanted to build an underground house, but this site was not suitable for it,” Tyrone reflects. “The architect picked up on that and said it could be earth-covered rather than buried in the ground. He came up with the shape and it sold me.”

With the imposing Yarra Ranges in the background, an earth-covered roof is both aesthetically and naturally a delight, as well as an excellent form of insulation and a bushfire retardant. But the cost was considerable – the couple spent five times what they would have on a more conventional roof and were forced to borrow money to complete the house. 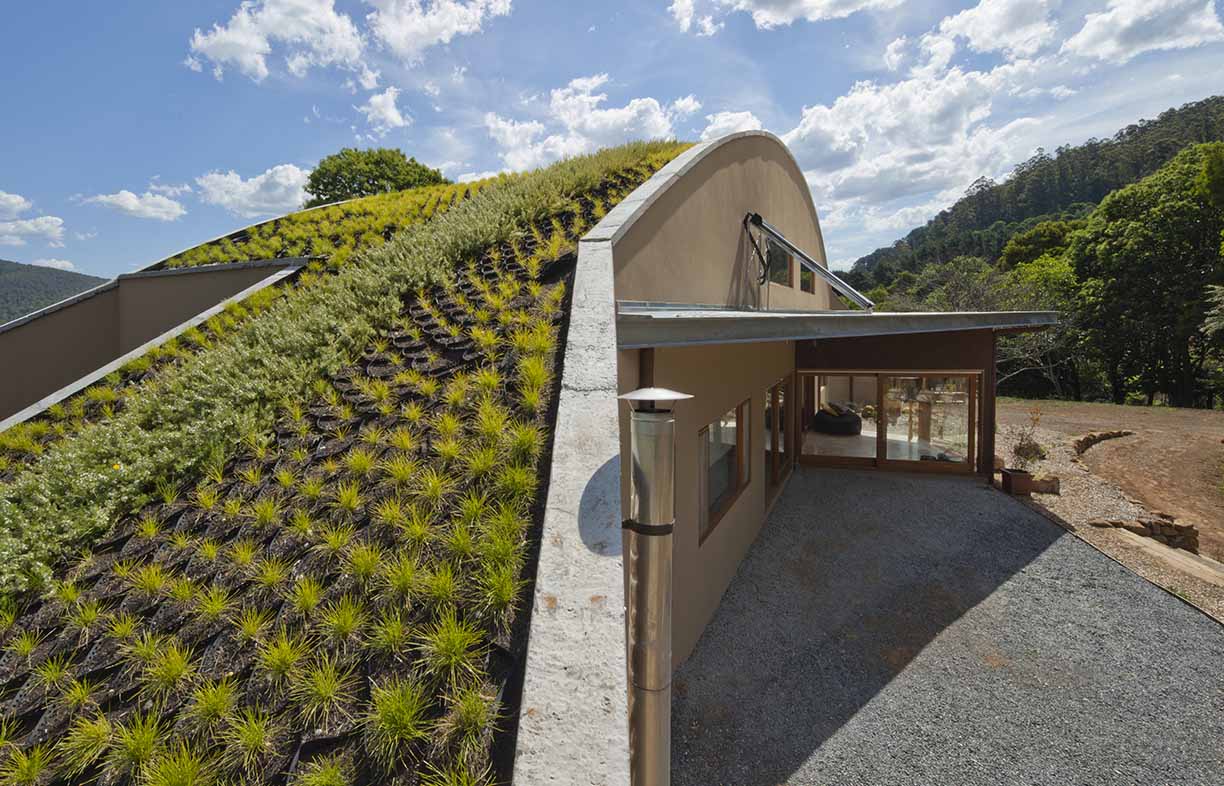 Native plants grow on the earth-covered roof that provides fire resistance, thermal insulation and helps the home blend into the surrounding environment. The living spaces look north out to a pond that continues the home’s connection to the environment.

Despite this, there is little that Tyrone and Hailey are not happy with about their new home. Their planning and research were thorough, including the incorporation of five criteria – cost, aesthetics, function, feng shui and sustainability – which they used to evaluate each aspect of the build. Alvyn has found that the home performs thermally even better than expected, and the couple’s hard work has paid off in an exceptionally considered and sustainable home. “It’s the way they went about doing the work … [building] sites are mostly full of machinery, but on this site so much was done by hand. It’s quite amazing,” comments Alvyn.

For Hailey, the graceful energy and feel of the home are worth the involved, and at times stressful, process of building. “It was a fantastic opportunity to start from a clean slate,” she says.

Tyrone is proud of the fact that meticulous reuse of materials meant just three trailer loads of rubbish were taken off the site. Throughout the whole build process, the right people turned up when we needed them, he says. “One of our goals was to enjoy the process. You don’t get the privilege to do this many times in your life.” 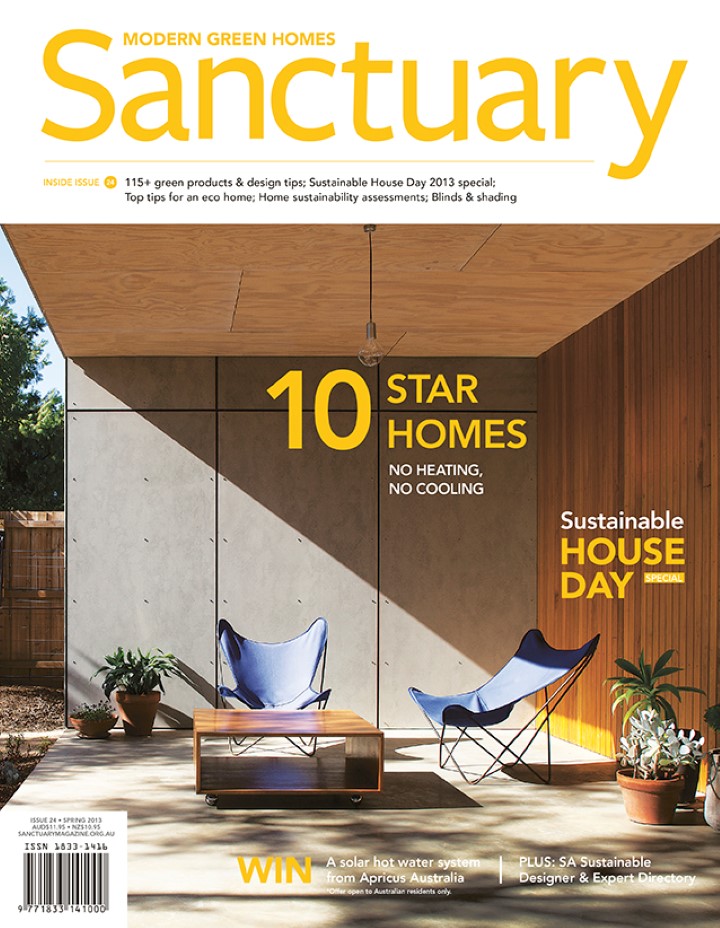