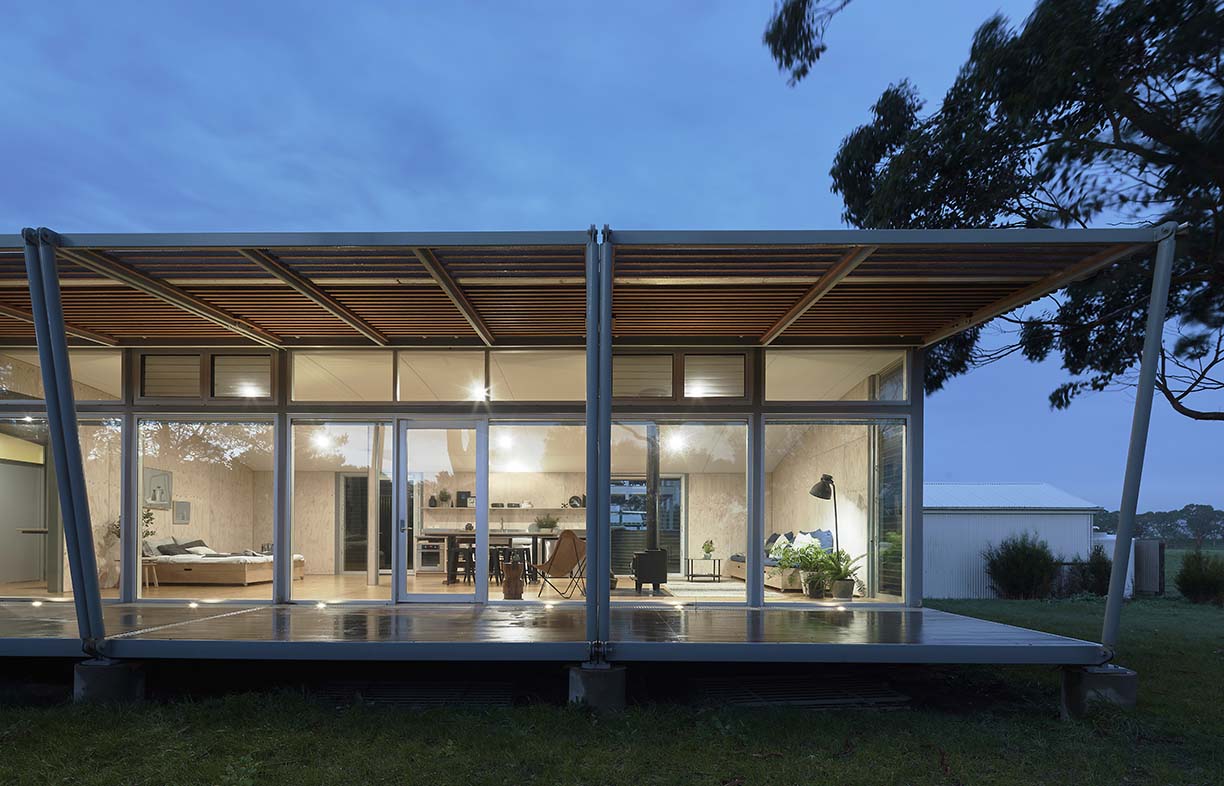 While many of us would seize the chance to own a country holiday house, the idea didn’t sit comfortably with Donna Coutts. “It seemed wasteful,” she says. “It’s not the most environmentally sustainable thing to run two households.” Then an unexpected opportunity gave her pause.

“Two modular commercial buildings were being decommissioned,” she recounts. “They were extremely robust and designed to be used as offices all over Australia, including as far north as Townsville, where there are stringent building regulations for cyclones. So they were very strong and far too good to be scrapped.” Reflecting on the low embodied energy of reused buildings, Donna concluded that it “seemed wasteful not to use them.”

The small town of Walkerville, with a bucolic mix of farmland and small residential blocks, sits overlooking Bass Strait in south-east Victoria. Donna owned a 720m2 vacant block in the town and, after buying the two office pods, she commissioned NRN Architects in Melbourne to transform them into a holiday house on the site.

Donna had unusual ideas about the design of her holiday house: she wasn’t interested in having multiple bedrooms or a distinct living area, or even much storage. She wanted to make maximum use of the prefab buildings and, where additional materials were needed, they were to be “as sustainable as possible and made to last for many generations.” The space had to accommodate her large family and guests, and adapt to use over time. Because her budget was tight, expenditure had to be smart. Finally, the site had to meet BAL 29 construction standards.

Natasha Nassour from NRN began by considering the two different-sized pods. The smaller 20m2 one had a disabled-access toilet and sink, so that part was designated as the wet area (bathroom and laundry). The office space was earmarked as the sole dedicated bedroom – being a clearly defined space, that was the logical choice. But those were the only fixed elements in the new design. The layout of the larger pod and how it would combine with the smaller one were up for grabs. 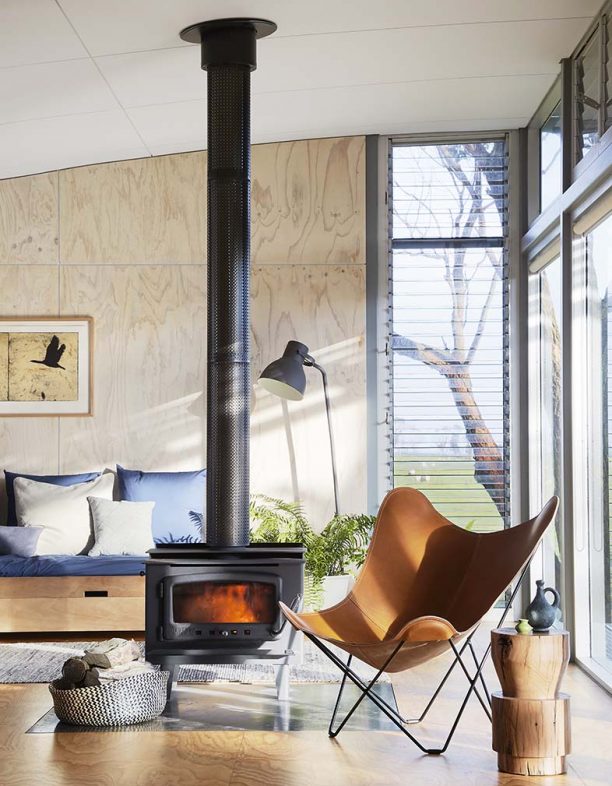 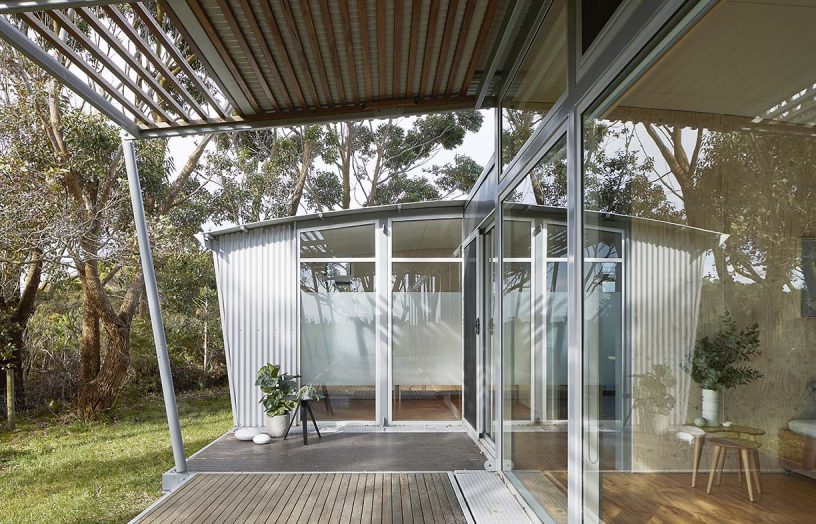 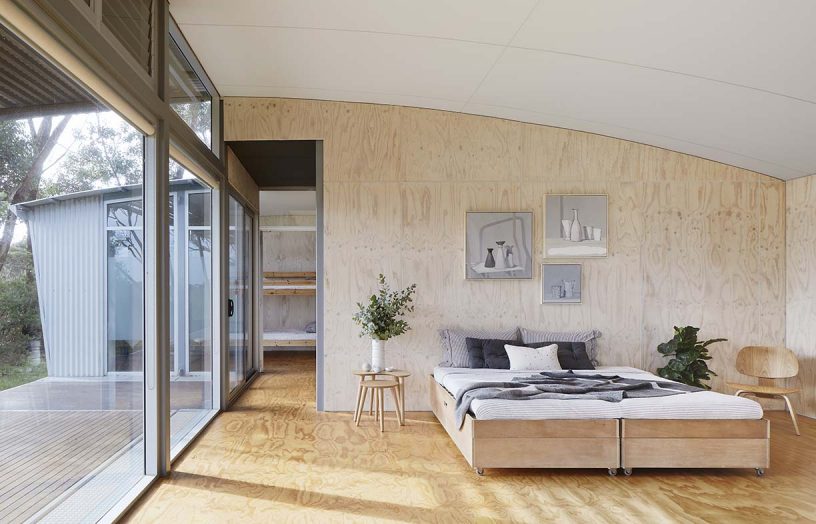 Left: The larger of the two salvaged prefabricated pods was oriented with its extensive glazing facing north for passive solar performance, and functions as a flexible living, dining and sleeping space. Cleverly designed furniture can be configured as sofas or beds. Top right: The smaller pod was placed at right angles to the main one, creating privacy from the road. It contains the bathroom and laundry and a bedroom. Each pod came with a fold-down deck. Bottom right: Extra sleeping space can easily be created in the main room using the moveable furniture. A reading nook is tucked in between the living space and the smaller pod beyond.

The bigger 67m2 pod was oriented with its windows facing north to maximise the solar aspect, with the smaller pod placed at right angles between it and the street. This arrangement has the benefit of turning the view to the garden and nearby farmland, instead of outwards towards the street and neighbours. “When you’re inside the space you forget that you’re right on the street,” says Natasha.

When a brief calls for a flexible living space without partitions, the challenge is where to put the fixtures that need to be locked down, and how to mark out zones – even if they’re going to be mutable. For inspiration, Natasha looked to rural buildings like country halls that had a “loose way of inhabiting a space”. By placing the fireplace in the centre of the room and the kitchen on the southern wall, Natasha gained freedom to play with the rest of the large pod. She used custom joinery to make lounges that work as both beds and sofas. Mounting these on wheels was a smart way to keep the living space open and adaptable, and to signify zones like sleeping or living areas without the need for walls or partitions.

Colorbond steel was chosen for external cladding; it’s an ever-reliable option because of its cost-effectiveness, low maintenance and bushfire protection. Inside the house, whitewashed plywood cladding and flooring dramatically contrasts with the darkened steel and timber lining of the entry porch and hallway (with reading nook) that links the two pods. Rounding out the ESD features, the all-electric house is powered by rooftop solar, and two rainwater tanks (a third is reserved for fire-fighting) provide potable and flushing water. With limited western and eastern exposure, and shading to the north, the house is protected from summer sun, and the fireplace and retained existing air conditioner lend extra cosiness in winter. 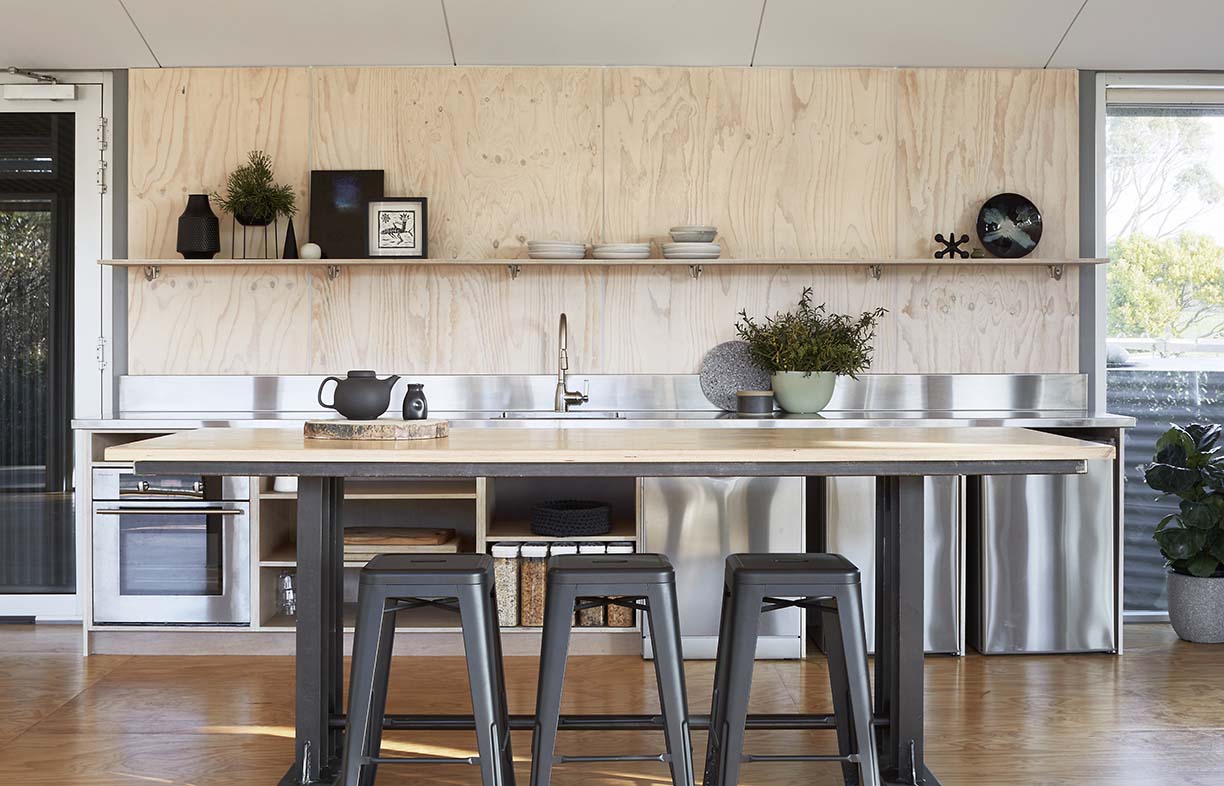 The house is notable for creatively repurposing a pair of existing buildings, almost beyond recognition. But it’s also inspiring for another, quite practical reason. The entire cost – including purchase of the two pods and interim storage, transport and craning, professional fees, materials, appliances and custom furniture – came to less than $200,000. It’s rare to see an environmentally sustainable design that’s essentially a new build come in at less than the cost of many home renovations, and Donna’s approach can be replicated by others looking to build a low-cost home of their own.

In avoiding the temptation to build just another “regular house”, Donna’s holiday retreat offers an opportunity for family and friends to come together and reset. She’s delighted with the result. “The spaces work beautifully. Sometimes eight or so kids all camp on the floor in the big room; other times they’re camping in tents in the backyard. The kitchen is terrific: we line up the two big tables and seat 12 or more people around them and everyone pitches in to get the food ready. Because nothing is hidden away everyone feels they can jump in and help because it’s clear where everything goes. It’s been a great success!”