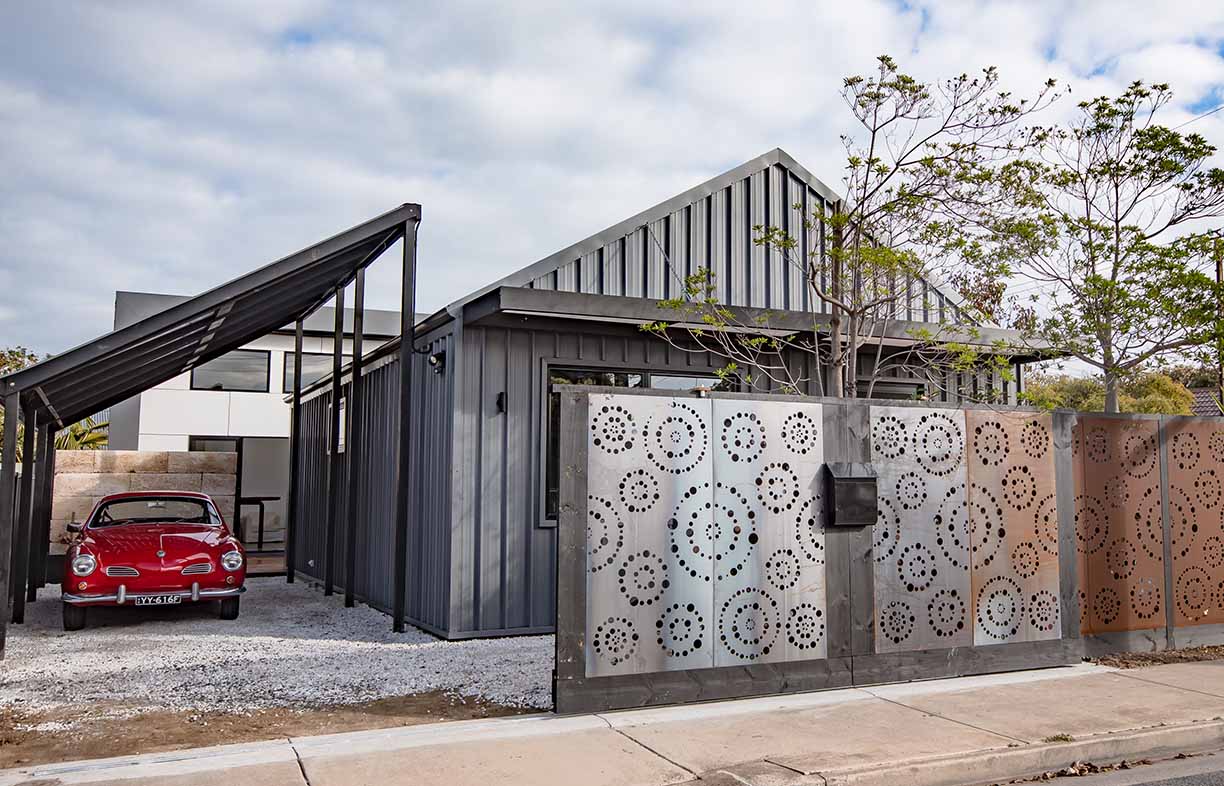 Solar panels double as the roof for the carport which saves on roof materials.When the panels are seen together with the Corten steel fence, the house attracts a lot of neighbourhood interest.

Having built one climate-ready house on an ideal site, this couple set out to prove they could achieve great ‘Mark II’ results on a poorly oriented block within an affordable budget.

Mark Clayton is no novice when it comes to sustainable design. For seven years he’s helped his Living Building Solutions clients improve their sustainability credentials, and with his wife Karina, he built a sustainable home in Adelaide in 2015, which has been opened several times as part of Sustainable House Day.

This year he will open the doors to his latest “experiment”: a sustainable house on a suburban corner block where the northern orientation is to the street, and the longest open side faces west. Mark took on the challenge with gusto when he worked with SUHOstudio to design a passively cooled and warmed house that would comfortably withstand Adelaide’s climate extremes.

“This is a narrow block on a north-south axis, and you enter from the north,” Mark explains. “I thought it would be fun to see if I could make it work, and after first inspecting the house [a deceased estate which was dilapidated and had to be knocked down] on a Thursday, we bought it at auction on the Saturday.”

With the settlement done and dusted, Mark and Karina didn’t waste any time getting started. The design for their two-bedroom house was ready and approved in just three months, and the build itself – which they estimated would take five months but took seven in reality – was relatively fast. Progress was slowed by several factors beyond their control, including unexpected rain on the day the concrete slab was poured last June, and two trips overseas for Mark, who has travelled to Nepal as a volunteer to build schools for the past three years.

The couple moved into their new abode in March this year, and when Sanctuary spoke to them during their first winter, they were thrilled with the home’s performance so far. “We didn’t want a big house – this is only 145 square metres because there is just the two of us, no children – so why build a massive house that we have to heat and cool, and which would cost more to build?” Mark asks. “This is tailored to what we want in life.”

For their first home, they focussed on a design that would be easy to heat in winter but found that it got uncomfortably warm on hot summer days, so they changed tack this time around.

“Because of the orientation, I knew it wouldn’t be as warm as the first house, and I was working off the principle that it’s easier to heat yourself than cool yourself, so we designed this to be a cool house,” Mark explains. “At the moment, Adelaide has about seven to 10 days every summer where the temperature tops 40 degrees Celsius. I believe that in 15 to 20 years, we will experience 10 to 15 or even 20 of those super-hot days, so I wanted to build a house that would be easy to keep cool, so that when the climate gets hotter, it will perform better.” 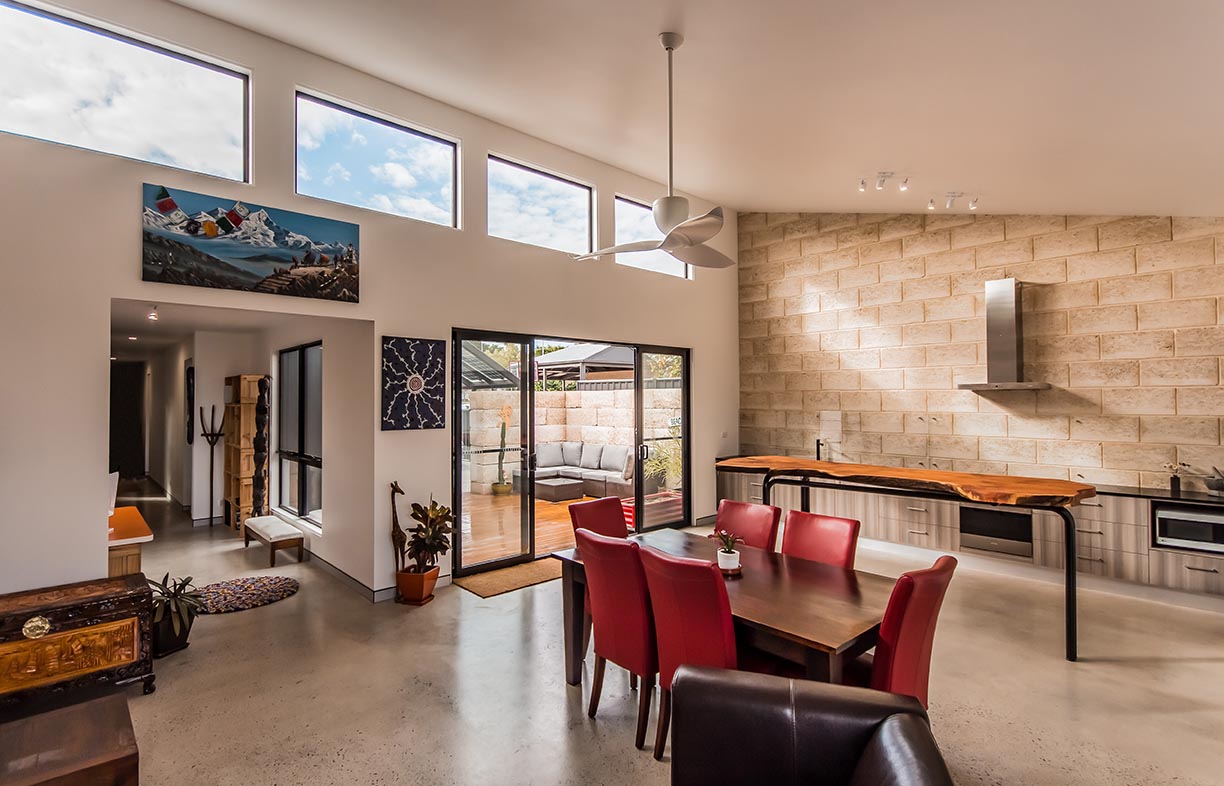 While their previous home had no mechanical heating or cooling, this one has a wood burning fire for winter warmth, which has already come in handy, Mark says. “On cold winter days when we don’t get much sunlight, we can heat it up slightly and the design is optimised to keep comfortable.”

In summer, the arrangement of rooms and external shading will help to keep the sun out. Extended eaves protect the high-level northern windows in the living room, to let in daylight without heat. A deciduous vine will eventually provide shelter to the sliding doors in that space. Thermal mass – in reverse brick veneer walls featuring internal limestone, and polished concrete floors – helps to maintain stable indoor temperatures.

There is minimal glazing on the western side, which benefits from a row of mature trees outside the boundary line, and the front rooms – including the main bedroom – are shaded by a verandah that mimics the traditional villas of the neighbourhood.

To seal the building envelope and ensure it remains cool in summer, Mark used a couple of ‘smart’ building products which might not be familiar to some other builders. These include thermally broken double-glazed windows – which had to be transported from Melbourne because they aren’t made locally – and Structural Insulated Panels, made of plywood and polystyrene, which were chosen both for ease of construction and to provide a continuous barrier of insulation to improve thermal performance.

After getting the basics right, Mark opted for a 6.2kW photovoltaic system, which might seem excessive for just two occupants. However, he explains it was necessary to cover peak demand on cloudy days, because they plan to install batteries in future.

The carport – with its solar panel roof – performs as a kind of billboard declaring the experimental nature of this house, and makes a bold announcement to passers-by that this is a home with a difference.

“We’ve had people commenting on the house since the day we started building,” Mark recalls. “Now, if we are out in the garden people stop and chat, and if they are really interested we take them through and explain what it’s all about. Because it looks different, people pull up in their cars and take a look, which is great.”

For the landscaping, the couple deliberately chose porous materials to reduce stormwater runoff which travels to the sea, in favour of replenishing the city’s underground aquifers.

Thanks to Mark’s energy monitoring systems, the couple can keep up to date regarding the home’s performance data and measure this against their expectations of how comfortable the internal temperature should be. The system takes hourly temperatures in three main rooms, which provides a rich trove of data for analysis and will be used to inform future builds and, over time, help refine this building’s performance.

“We found on the last house that the predicted temperatures were very accurate against the actual temperatures in winter, with a 0.1 or 0.2 degree differential,” Mark says. “But in summer, the figures were a long way off, 3 to 4 degrees in some cases, which demonstrates that buildings get hotter in actual use than the software currently predicts. That’s going to have a big impact on peak electricity demand, going forward.”

Mark asserts that it is much easier to retrofit a building to make it cooler, rather than warmer, using methods such as adjustable shading, planting more trees, installing additional doors to separate zones, or simply by using an outdoor umbrella for shade. So his ambition to produce a cool house is likely to pay dividends as Adelaide experiences more hot days in future.

And what do the couple’s friends and family make of this bold new experiment in climate-change-ready living? “We built this on a reasonable budget to show the industry and consumers that it can be done, on the worst oriented block,” Mark says. “Most people are surprised by how big the house feels – thanks to the double-height living space and slightly wider corridors – and some of our friends who are thinking about building are keen to come and have a chat, and touch and feel and see what we’ve done.

“Best of all is when you come home from the pub, and it’s 9 degrees Celsius outside, you step inside and it’s 21 degrees,” he laughs. “That’s just from the thermal release without any heating. The amount of sunlight we get into the building is absorbed by the thermal mass, and because this is a well-insulated and very airtight building, once that heat is inside, it doesn’t get lost. The reverse applies in summer, so we’re keen to see how it performs then too.”

Mark’s house will be opening for Sustainable House Day, 15 September 2019. You can register to attend by clicking here.