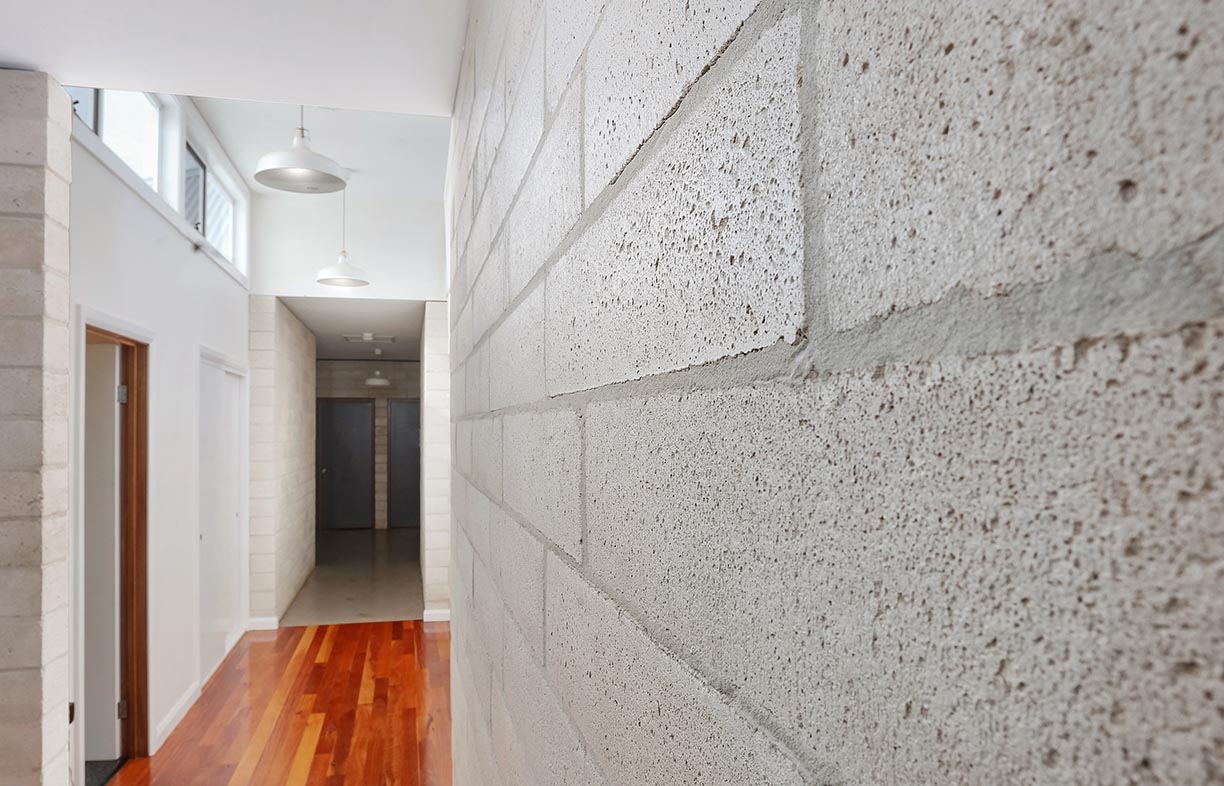 WoodStone is a cellulose masonry composite. This wall is built with blocks made partly from chipped wood destined for landfill. The material has fire rating and thermal mass benefits, and when used in a passive solar designed building can save on heating and cooling energy. Image courtesy: Natural Brick Co

Sustainable designer Dick Clarke explains some of the new developments reshaping the way we build in Australia and around the world, including composite materials that reduce carbon, interrupt waste streams and even re-assemble themselves.

That song with its humorous circularity, a favourite of my grandfather in the 1950s, has a certain relevance for the 2020s. There’s a hole in the bucket alright! We’re still leaking carbon emissions at way too high a rate, and the way we make building materials, especially those involving cement and concrete, are a big part of the problem. ‘With what shall we fix it’ that we can be sure won’t cause problems further down the road? That is a question innovators at the leading and bleeding edge of materials science are seeking to answer.

While there are still no truly sustainable building materials available for the mass building market – yet – happily there are some really useful developments in the pipeline and in the here-and-now. Research bodies the world over are working on solving materials issues, and none are better than the University of NSW which, under the leadership of Professor Veena Sahajwalla, has already knocked over some major hurdles and more are about to fall.

Some new materials the university has produced have already been commercialised, which means that the consumer choices you make now may take advantage of things like ‘green steel’, which diverts two million waste rubber tyres from landfill each year and has a lower embodied energy than regular steel, though is not yet carbon neutral [read more about this work elsewhere in Sanctuary 47]. Other Australian researchers have been working on plant-based resins, fungus-based insulation and more.

Composites are those made up of different materials, which sounds simple enough. The more commonly used definition is a material where the components are easily identifiable by external examination – for example concrete is not usually considered a composite, whereas ‘foam sandwich’ is. And composites, like fibreglass and hemp-lime materials, are being distinguished from the more high-tech products hitting the market.

Composites have been a major focus of the aerospace industry for five decades because of the demands for high performance and where cost has been a secondary factor. Nonetheless, SIPs (structural insulated panels, see Sanctuary 41) have become a lower cost option for often-improved performance in the construction industry.

But traditional SIPs, while strong within each panel, are often limited in the connections between them, and with other building components. These limitations are usually both structural and thermal. A truly homogeneous structure where the SIP or panel is continuous around the whole building has been impossible to create without using expensive and exotic materials such as those used for racing yachts: PVC foam cores with fiberglass or carbon fibre reinforced epoxy skins.

Apart from the expense, the toxicity of the epoxy, the embodied energy of the fiberglass and non-recyclability of the PVC core means this is not a sustainable option. 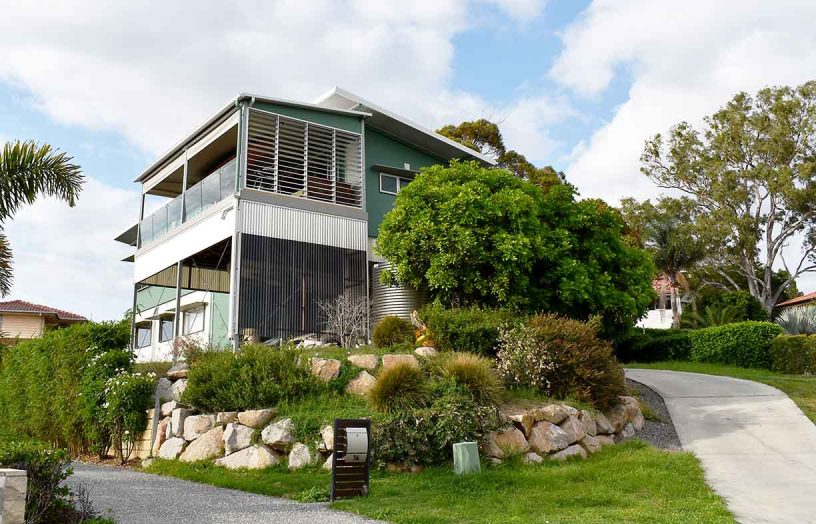 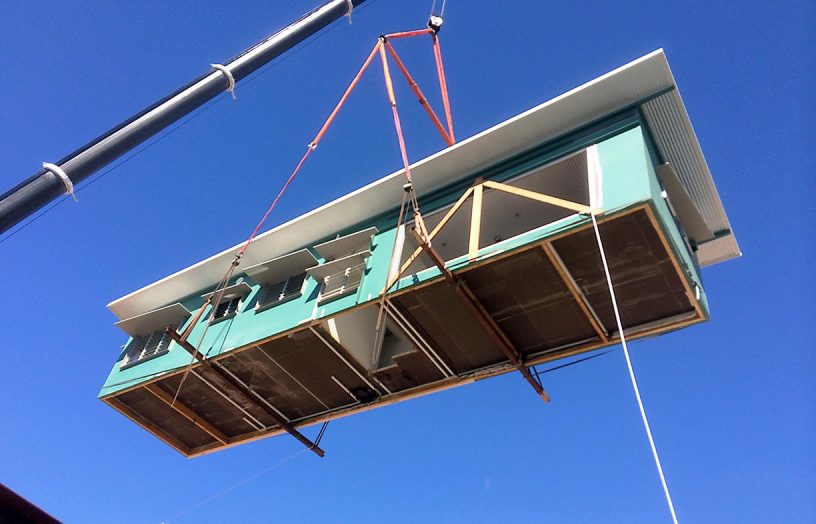 Plant-based epoxies change the sustainability picture dramatically. This is where cores are made from end-grain balsa or recycled waste plastics, and flax is used as a reinforcing fabric. Brisbane boatbuilder Ian Wright, drawing from a century of family boat building knowledge, has created a modular unitary-construction small house using exactly that mix of materials: bio-epoxy, balsa core, and flax reinforcing.

The building floor plan is 18 metres long by 4 metres wide, and has 2.7 metre ceiling heights. It was craned onto a truck for delivery to site, and complete with internal fix-out weighed in at an astonishingly light 9100 kilograms, yet was so stiff that it was lifted with just two cranage points. Given the system’s yacht racing heritage, the lightness and stiffness should not come as a surprise, but the crane driver and house mover couldn’t believe their eyes!

The other great advantage of unitary construction is that it’s inherently sealed, both against water ingress and air leakage. This gives the structure a great head start towards passing the blower door test in achieving Passive House certification (see Sanctuary 45). Some additional insulation would be required for more extreme climate zones, but the core itself provides a useful amount.

Never one to recommend materials without firsthand experience, I ordered some bio-epoxy resin and flax reinforcing fabric, along with end-grain balsa core material from ATL Composites, to make a few smaller objects for my own testing. I am a convert. The bio-epoxy is as easy to use as any other resin, and while its raw material obviously undergoes some serious chemical massaging to convert from plant oil to resin, its small vapour volumes are quite benign – unlike most synthetic resins that off-gas quite offensively.

The flax fabric is also easy to wet out and form, and although lower strength than carbon fibre, is quite adequate for most purposes – and any high-stress points can still have localised patches of carbon fibre, as required. It doesn’t become transparent the way glass fibre does, but retains a pleasant looking brown pattern that looks exactly like, well, flax!

Ian Wright has found that the price of balsa has increased significantly in recent years, due to the demand of the wind turbine blade industry, and has sourced a low-cost plastic core material made from post-consumer waste plastic, which will be a good use of that material until we ultimately exit the plastic age.

Although the bio-epoxy is plant derived, chemically it is still an inert ‘plastic’ when cured, so the finished product is not biodegradable.

Currently there is no commercial avenue to recycle cured epoxy resin which is an area that requires more research before these materials reach end of life. 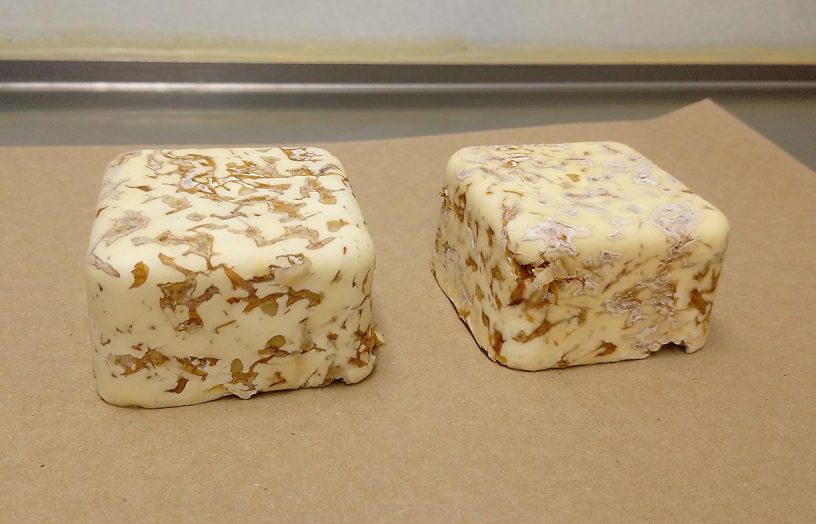 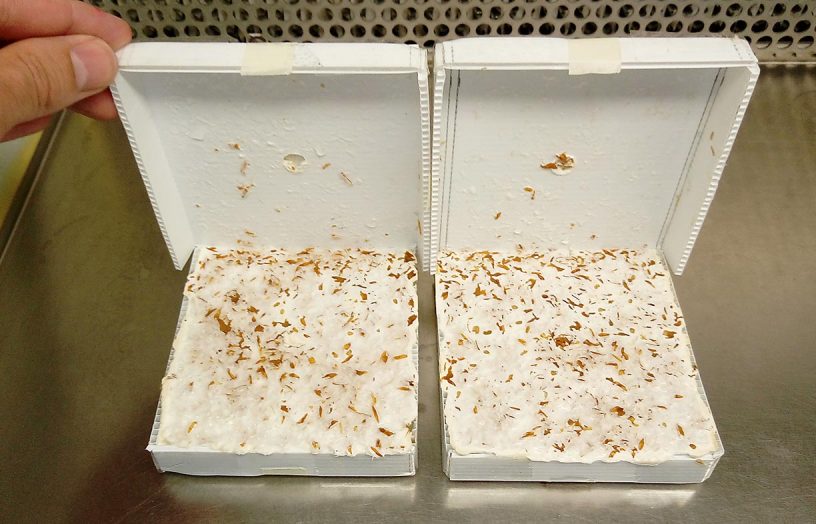 A glass bowl of rice and mushrooms becomes a building

Take a glass bowl of rice, add some mushrooms, and you have a simple meal. Or was that a building you wanted? Scientists at RMIT in Melbourne have discovered a way of making rice hulls (ok – these are not the bits you normally eat, so the heading above is a bit cheeky!) into high-performance, fire-resistant bricks using one of the many beneficial fungi (specifically Trametes versicolor) and ground glass.

When combined and baked in a certain way, these components form a material that can be shaped into a variety of forms, and can perform many different functions in a building or in joinery, at the same time as providing a useful fire rating. It can be made into bricks, panels, or boards – these being an alternative to particleboard and other fire-susceptible materials, so the opportunities in residential and commercial buildings are enormous.

The RMIT team tried variations in the mix of materials and found different performance characteristics, but perhaps what makes it globally significant is that the brick production is carbon neutral. Also the smoke produced when subjected to fire is less than other materials, and much less toxic. Although not yet tested to the Australian Standard, the fungal bricks are expected to be termite resistant, based on their constituent materials – an important benefit for 95 per cent of Australia’s landmass.

More than half the world relies on rice as a staple, with annual global consumption nearly half a billion tonnes, 20 per cent of that being rice hulls. Normal practice sees rice hulls incinerated or sent to landfill; Australia generates about 600,000 tonnes of glass waste every year. By contrast, this new material provides a cost-effective way to reduce this waste. Hopefully it will find a commercial channel to market before long, perhaps through an existing brick or board manufacturer.

The unsung heroes of the 21st century may have been hiding in the bush and the soil under our feet all this while. The medical world is discovering the benefits in things like manuka honey, bacteriophages and fungi. There is a self-assembling part of a fungus called the mycelium, found in many soil-dwelling fungi, with thread-like branches (hyphae) that form a base structure that can combine with other components to form useful materials.

One of these commercially available materials called MycoComposite uses mycelium as a self-assembling, biological binder for hemp agricultural waste. Hemp already has so many benefits as a raw material; this is just another benefit to add to the list. It is being used as protective packaging, furniture components, and as cores for solid doors with soundproofing and fire resisting qualities.

Award winning chairs such as the Gunlocke Savor Seating chair use it for seat backs, and Gryphon Doors in the US use it in the core of their premium door range. The material is not commercially available in Australia or New Zealand at present, but consumer demand causes these things to change. 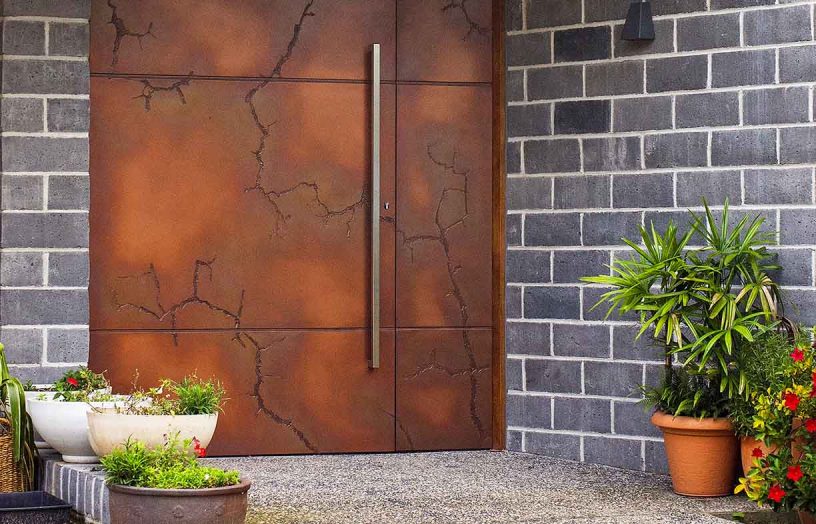 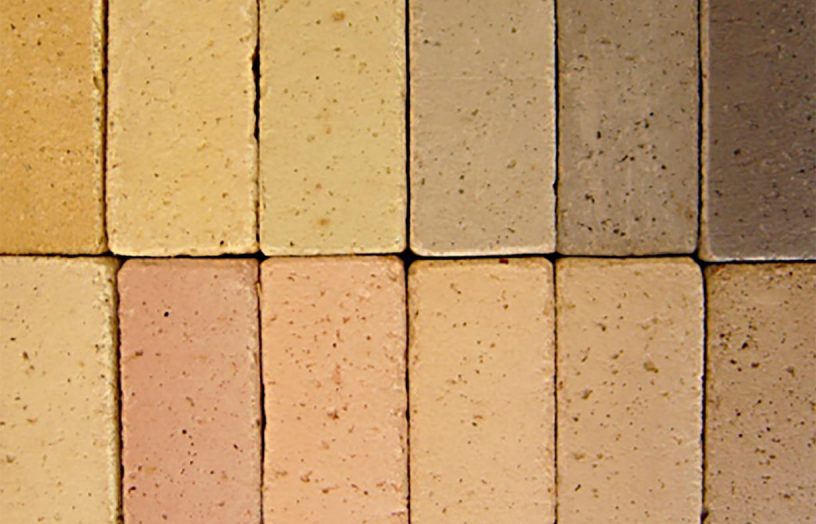 The Natural Brick Company produces WoodStone as blocks and other products which are available in a variety of colours and sizes. The blocks are made from 70 per cent waste product, from: used pallets, rice hulls, sand and glass waste. They also contain a small amount of Portland cement and a low-carbon binder made from waste materials. Images courtesy: Natural Brick Co

Timber and waste into blocks and panels

Sawdust has been used as an aggregate in masonry materials before, but there is a new development called WoodStone, which is taking it a step further. Its forerunner, Timbercrete, has been around for about 15 years and combines sawdust, sand and cement into a kind of concrete, used in block form.

This new evolution of that basic concept has been developed by the Natural Brick Co, using cellulose sourced from used pallets that would otherwise go to landfill, rice hulls and other cellulose-based agricultural waste, low-grade alluvial sand, glass waste, a small amount of Portland cement, and a proprietary low-carbon binder made from waste materials.

WoodStone is produced as blocks and panels, with specialty profiles like sill sections also available.

You can see some common themes emerging, where materials that used to be considered of no value, or very low value at best, are finding their way into high value products that achieve high performance outcomes. Since I published the first edition of How to Rethink Building Materials in 2014, much has happened at the leading edge of materials development, though mainstream construction is still doing ‘same old’.

We still have a long way to go in reducing the embodied energy and off-site production impacts of our buildings, but innovations like these are showing what’s possible, practical, and a delight to live with.

About the author
Dick Clarke is proprietor of Envirotecture and a building designer with over 30 years of experience. 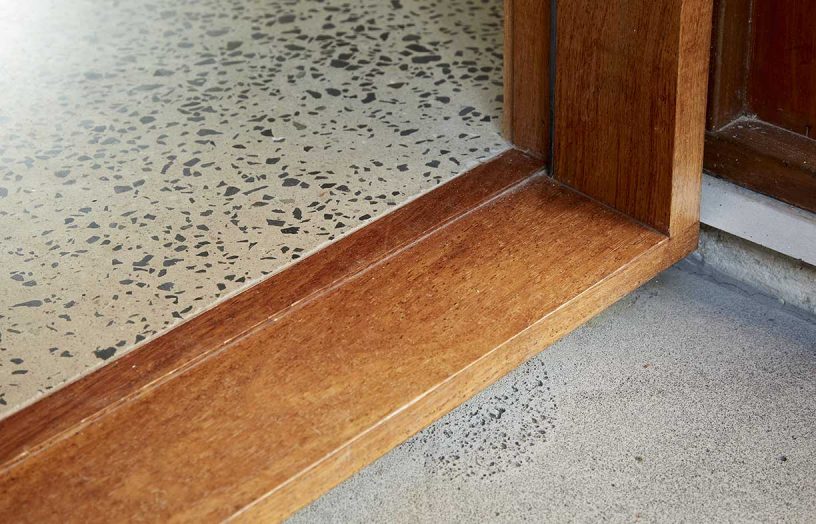 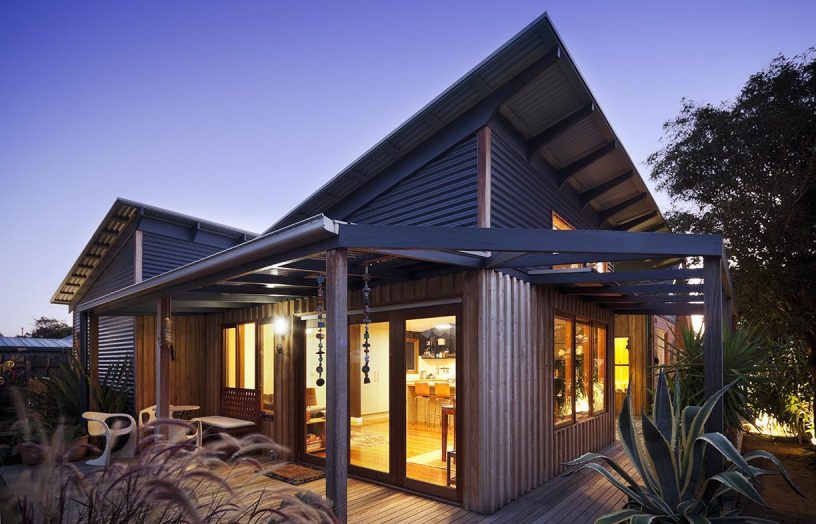