A tale of three winters 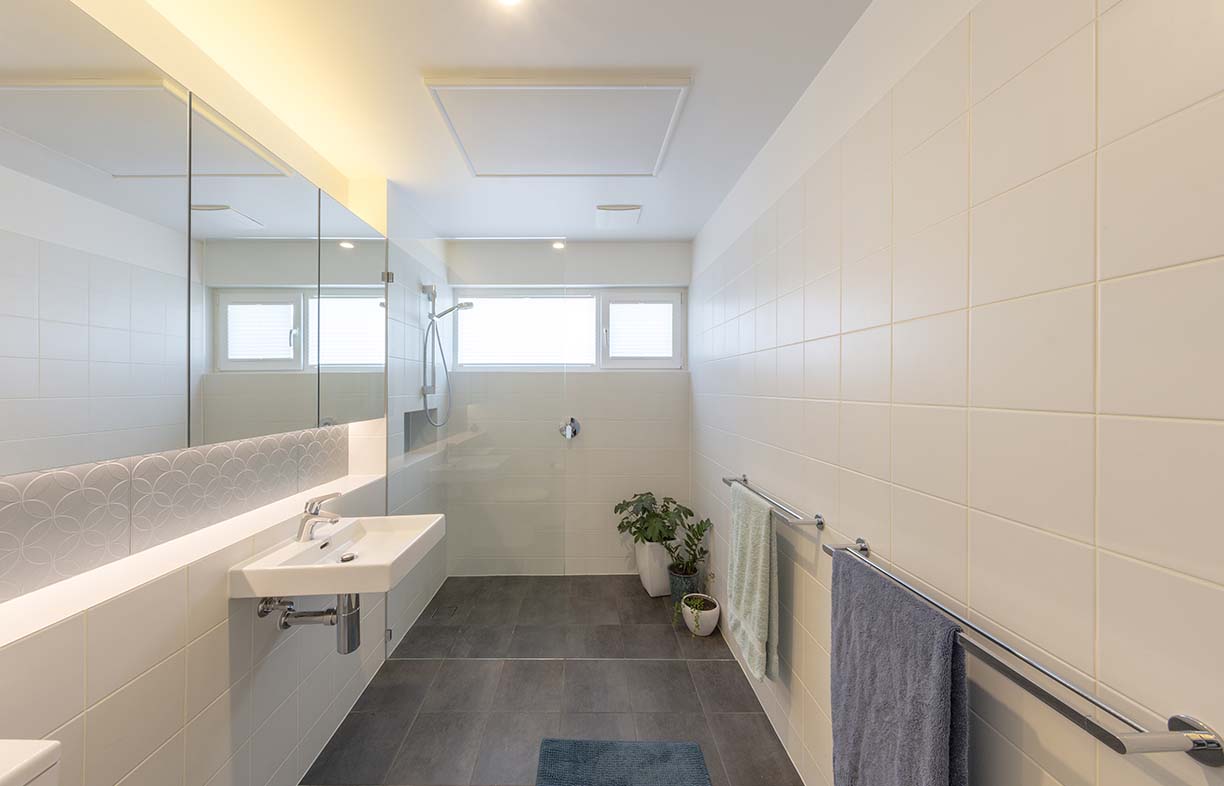 Far infrared heating used in each bathroom was a constant throughout the experiment. Image: Ben Wrigley

In a well-designed house, can you get by without heating? And how does far infrared heating compare to split systems, for efficiency and comfort? Jenny Edwards put her own home to the test.

There is an old nugget of folkloric wisdom in Canberra, often shared as winter approaches: “You shouldn’t turn on your heater until Anzac Day.” Canberra winters are long and cold, particularly when compared to those in most other Australian capitals.

The Anzac Day Rule is a tacit admission that even by mid-April there is a temptation to crank up the heater, but the rule encourages Canberrans to hold fast, to restrain themselves until it’s really needed, so as to keep their energy bills from soaring ever higher.

It doesn’t have to be that way.

I’ve been involved with testing, modelling, designing and improving the thermal performance of houses in the Canberra region for over a decade. Much of the suffering during Canberran winters is due to the poor state of the housing stock; and sadly, I include many new homes in that assessment.

The key is designing with the local climate in mind. My colleagues and I provide customised, energy-efficient designs. It has become clear that the houses we are producing don’t need much supplementary heating beyond their passive solar gain. We are not the only ones working to change things in Canberra: there are terrific local examples of energy-efficient homes designed and built by various passionate local professionals and organisations.

I recently had the chance to walk the talk, when my partner and I designed and built a new home in the Canberra suburb of Wright. Designed by my company, Light House Architecture and Science, the home was built to take advantage of passive solar gain and to overcome the challenges of a small floor plan and a poorly oriented block. It is an all-electric home. There is no gas connection or wood fire.

My house as a case study

It was designed and built according to principles of efficiency:

All of these were implemented with standard design and building techniques. This is not a ‘Passive House’ (also known as Passivhaus), a system for energy-efficient construction that is an alternative to our approach. Passive House would have required specialised construction techniques and would have cost considerably more. However, our house meets the total energy consumption criteria of a Passive House constructed home, a topic I will expand on at another time.

A chance for an experiment

When we first moved in, the heating hadn’t yet been installed. As firm believers in efficient housing and in our design methods, we decided to find out how well our new home would perform in a Canberra winter with no heating (other than two small resistive radiant (far infrared) heaters in the bathrooms).

This was an opportunity to prove that with good design, you can get by with little or no heating and remain comfortable. I hoped to show people the worst-case scenario for a well-designed standard-construction home in Canberra: going through winter without heating.

That began what became a three-year experiment with different kinds of heating, looking at how they affect energy use and comfort levels in our home.

Indoor temperature data was collected using wireless sensor tags from Cao Gadgets, placed in numerous locations around the house. Each tag provides temperature, humidity and light readings every 10 minutes. Outdoor temperatures were from the Bureau of Meteorology data for Tuggeranong, the nearest official weather station.

Year 1: no heating other than bathrooms

The only fixed heating we had that year was two Heat-on 600 W far infrared heating panels, one in each bathroom. The bathroom heaters perform the specialised task of heating a single, small space for post-shower warmth. They don’t heat the living areas or bedrooms. To really test the limits of the house, we planned to not use any portable heating devices either (a condition we eventually made an exception for, as I’ll explain shortly).

It turned out that living in the house without heating was surprisingly good, but with some important caveats.

Although the air temperature outside was low—we had some consecutive –8 °C nights—the lowest it got in the main living area was 12.5 °C; which is admittedly quite cool, but was nonetheless 20 °C warmer than the air on the other side of the wall.

In the first month of winter we were pleasantly surprised that the comfort levels held up. However, July brought the internal temperatures down to a level that was sometimes uncomfortable.

Our two teenage boys (whom I considered a litmus test for the experiment) coped fine with the no-heating winter. In fact, although my partner David and I took to wearing socks on July mornings, the boys got around in bare feet on our concrete floors (insulated on the underside and vertical edge), indicating that when they said it was fine, they meant it.

The family member who was most affected by mid-winter conditions was David, who works from home. By July, the temperature in his home office would often hover around 18 °C. He explained that sitting at a desk at 18 °C was a very different experience than sitting at a desk at, say, 20 °C. David suggested that perhaps our experiment was too strict, because our house needed to maintain the comfort levels, not just of a residential home, but of a typical office workplace.

As a result, we had to compromise the experiment mid-winter, with the introduction of a portable heater for David to use in his office. The heater was a freestanding Nobo 1000 W resistive convection panel.

Observations from the first winter 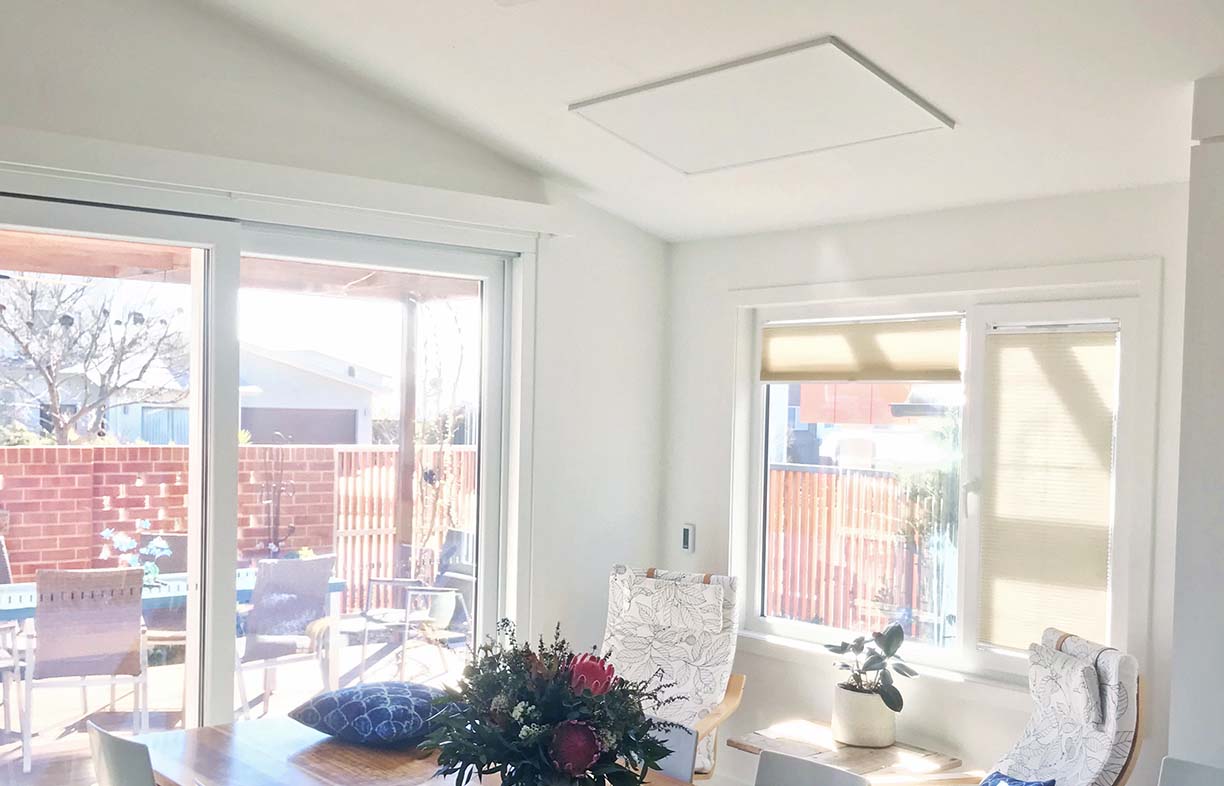 The 900 W far infrared heating panel on the dining room ceiling, as used in year 2 of the experiment.

The infrared panels emit far infrared which does not heat the air, but heats the surfaces beneath them. They provide a very subtle form of heat that creates no air movement and has a gradual effect on a room.

The problem with the far infrared panels was that our energy consumption increased more than I anticipated. This was partly because I didn’t program the timer on the controller and instead relied on the thermostat … and our memory! It is also because they are so unobtrusive—on the ceiling, silent, with no sign that they are turned on. This is an advantage in many ways, but it also meant that they were sometimes left on for much longer periods than needed or intended (for example, overnight during a chunk of July).

Observations from the second winter 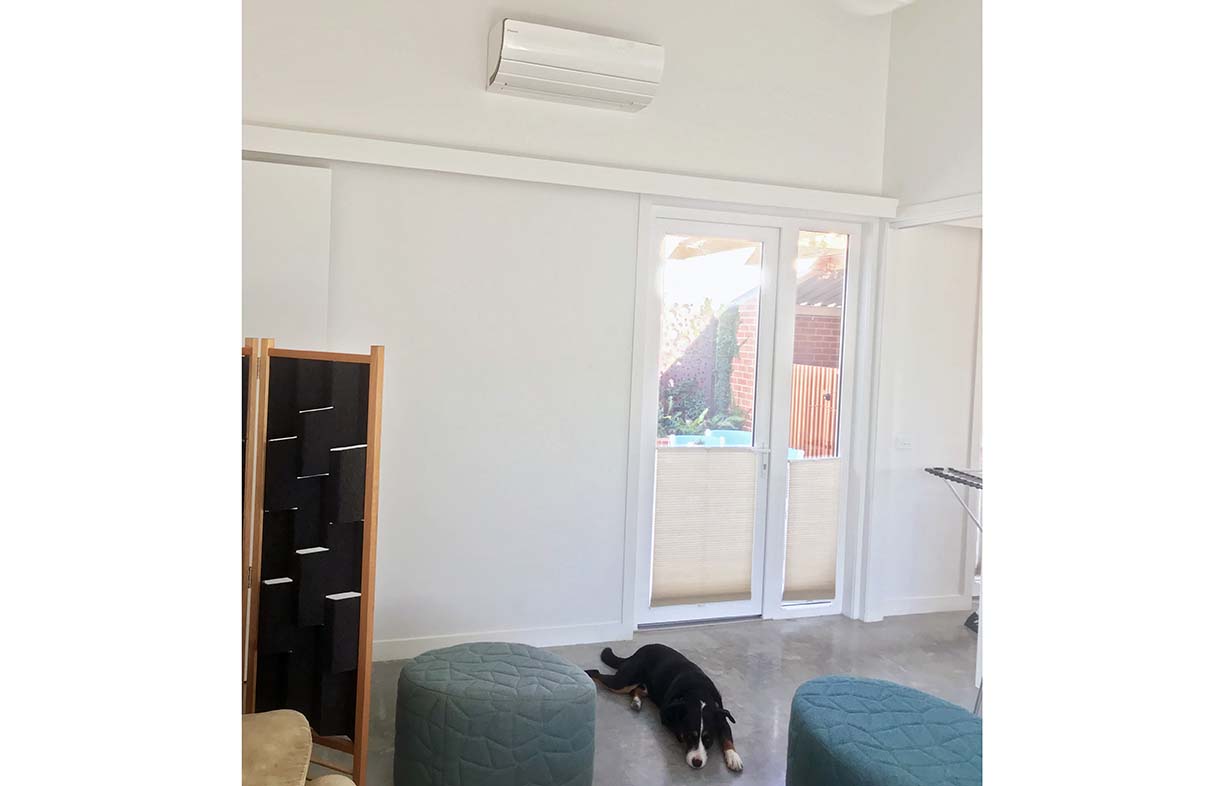 A 3.5 kW US7 reverse-cycle air conditioner was installed on the loung-room wall for year 3 of the experiment.

Two months before winter 2019, we installed a 3.5 kW Daikin US7 reverse-cycle split system in the central lounge room. We wanted to compare the split system with the infrared panels, so we agreed that the infrared heaters in the living rooms would not be switched on through the 2019 winter. (However, the bathroom panels could be used, as they had in the previous two years).

If the lounge-room ceiling fan is turned on low while the system is running, warm air circulates slowly through the rest of the house. The critical test was the home-based office. This winter, David felt no need to use a portable heater; the split system alone—although it was installed elsewhere—was able to maintain an acceptable comfort level in the study throughout winter.

We turned the split system off when we went to bed (~10.30 pm) and would turn it on when we got up (~7 am) when it would quickly erase any morning cool.

A few weeks before the start of winter our older teenager moved out. We expected that as a household of three rather than four, our energy consumption would reduce slightly.

Observations from the third winter

Table 1 shows the household energy usage and average temperatures over the three winters.

Table 1. Total household energy use and comfort (temperature) for the three winters: 2017 (no heating in living areas, except study), 2018 (far infrared heating in kitchen/dining and lounge) and 2019 (split system in lounge).

Between years two and three, when we switched from far infrared heating in our living areas to using a central split system, our comfort levels increased while our energy use halved. At the end of all this, my preferred heating configuration is our current arrangement: a small infrared panel in each bathroom and a split system in the lounge.

The first year’s results are also striking. This shows the performance of a well-designed and well-built home (of standard construction) with no heating in the living areas. Even without heating, these rooms were staying at least 5 °C warmer than the outdoor daily maximum.

The minimum temperatures are even more stark. While many older Canberra houses hit minimums only a few degrees above outdoor temperature if not heated, a well-designed, well-insulated and relatively airtight home was staying, on average, 13 °C warmer than the overnight minimum.

The minimums for the following two winters of 2018 and 2019 were about 2 °C higher than the first winter, despite heating never being run overnight in 2019.

The past three winters in our house have demonstrated that good design and construction is paramount. Whatever heating is installed, if principles of energy-efficient design are implemented, then the running costs will not break the bank.

Over winter a typical dual-fuel (electric and gas) Canberra family home uses six times as much energy and pays four times as much in bills as we now do in our well-designed and built all-electric home (based on data I collected from 11 dual-fuel Canberra family homes earlier this year, which correlates closely with the 2015 Residential Baseline Study results as presented in Renew 147).

On the other hand, different systems of heating vary significantly in efficiency. Resistive electric heaters (including both the Nobo and Heat-on far infrared panels) have a coefficient of performance (COP) of one while the split system we installed has a COP of five—the split system is five times as efficient as the infrared panel, and this is borne out in the lower energy usage in year 3. 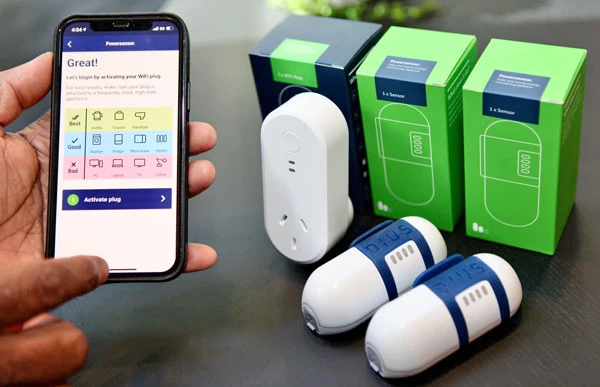